Despite the final round exit in the previous German round the Gulf Oil Dragracing team entered the final and home round of the FIM European Dragbike Championship with a small lead over nearest rivals the RG Engineering team of Rikard Gustafsson of Sweden and Rene van den Berg’s Eurol team from Holland. If King was to win his first round then an amazing 10th Championship crown would be his but both chasing riders had a chance of winning the crown should King falter and either of the other riders win the event. 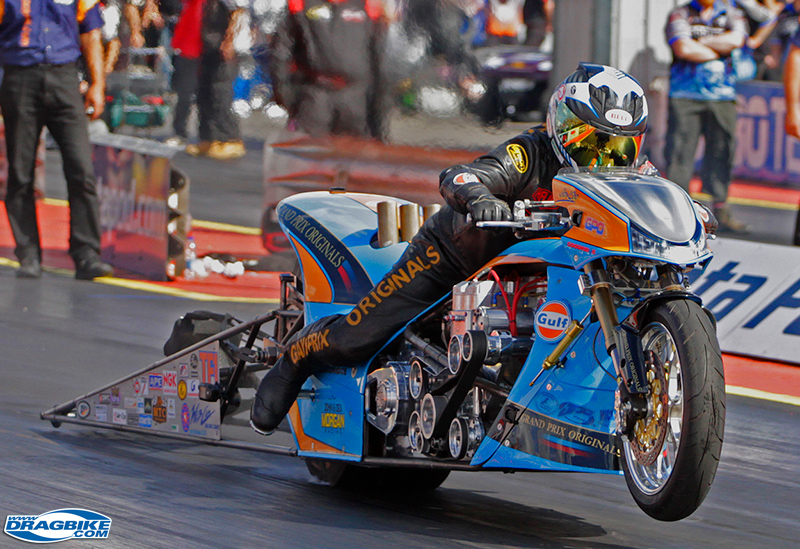 Once again, however, King suffered from a number of obstacles not least of which was the continuing issues with sprocket failure caused by a change in quality of the EK drive chain plaguing most of the top riders in the class across the world. In addition a qualifying day lost to inclement weather saw King finish qualifying in `only’ 2nd position and facing fellow British rider Stuart Crane in round one. 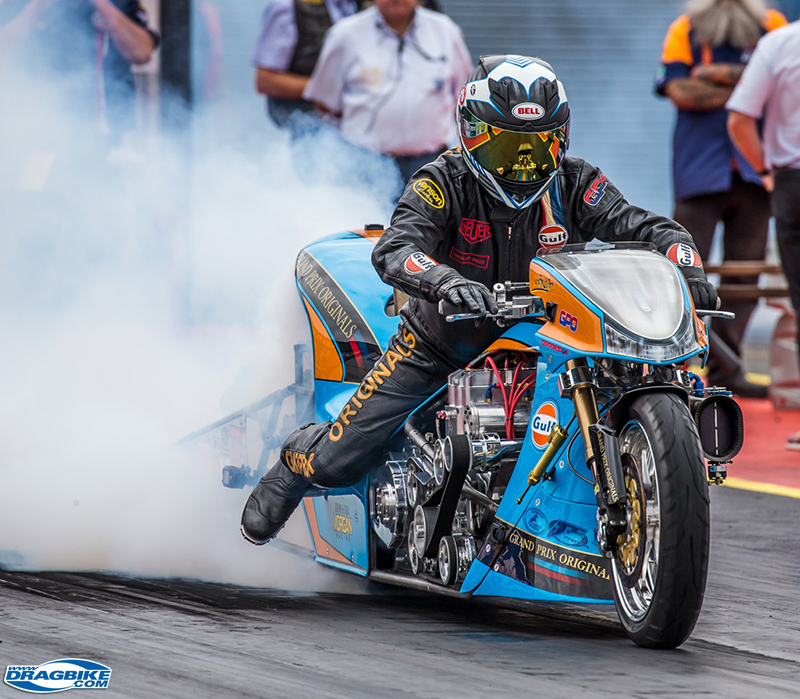 On paper King should have little problem in taking the round win over the machine of Crane and so the team decided for a safe tune, taking a large amount of horsepower out from the Puma powered machine by way of clutch, ignition and fuel settings.

However even this setting was too powerful for the track when King lost traction a few metres out from the start. As Crane took a healthy lead on the track King `pedalled’ the throttle and managed to hook the huge rear slick up, resuming traction and then gaining on his opponent. It seemed King’s rate of acceleration would allow him to pass his opponent however, disaster struck when the stretched chain slipped off the driveline taking all the teeth from the hardened steel drive sprocket. 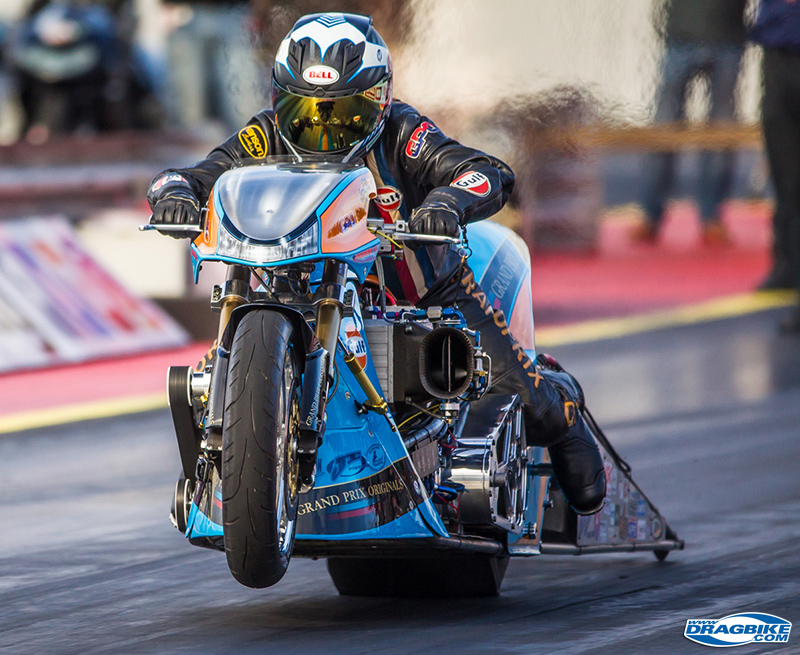 With Gustafsson and van den Berg winning their respective first round’s it seemed inevitable that the team’s quest for a 10th title was all but lost.

Van den Berg failed to take his challenge to the final when losing to Greek rider Fillippos Papafillipou in his semi-final but Gustafsson fared better with a fine win over UK rider and multiple UK Champion Steve Woollat.
With Gustafsson facing the Greek rider on a significantly slower machine, the event win and title looked to be in the Swedish rider’s grasp however as per King’s mechanical woes in the first round Gustafsson’s fortune took a turn for the worse when his crank failed as he chased the fast leaving Papafillipou leaving the popular Greek to take his first FIM event win. 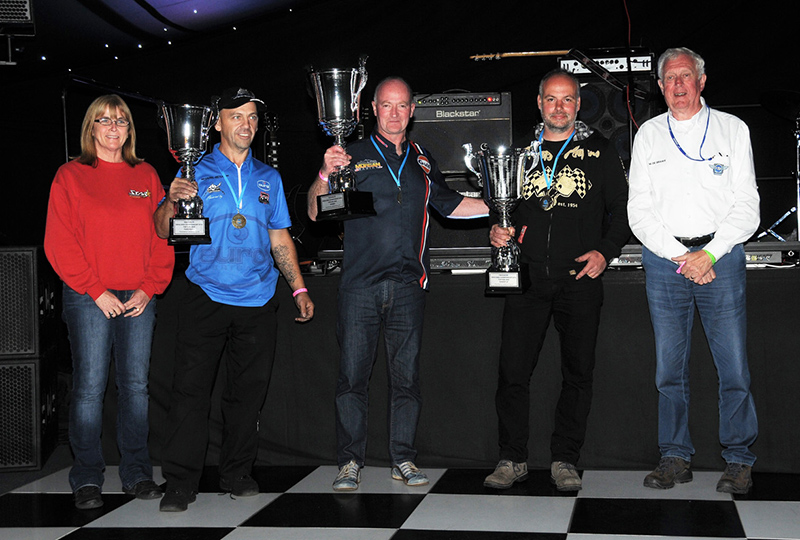 Being on the outside looking in was not quite the way the team wanted to clinch this amazing milestone however their consistent performances saw them through to the Championship once again.

After the historic mark was set Team Principal and rider Ian King said:
“The Gulf Oil Dragracing team are ecstatic after reaching Championship win double figures, particularly after suffering such poor luck in round one and thinking this was not to be our year. After running so well with five time 5 second passes in the opening round of the Championship we did not forsee that a simple chain quality issue could impede our success in each and every of the following events but I’m proud of the way my record breaking team managed the issue despite the burden of the additional between round maintenance work. When we started this collaboration with Gulf Oil in building a world class machine some 6 years ago we could only dream about winning 5 consecutive Championships but thanks to their fantastic support and world class oils and lubricants and the superlative products from our team of world class partners and sponsors the dream was realised. We couldn’t have done it without their support and that of Grand Prix Originals, my dream team of Michael Beaumont, Marius van der Zijden, Martin Brookman, Nick Pepper and Debbie King, Ivan Sansom and Rose Hughes, my daughters Georgina and Alex, our friends and our awesome fans across the globe and for that I thank you all from the bottom of my heart. They are simply the best! I’d like to add a special mention to Eurodragster for their superb live event coverage, the officials and awesome track crews employed by Track Group Europe in providing us with world leading track preparation, safety and fabulous free live event streaming, and I hope that the Championship will prosper to the benefit of all the great teams competing across Europe in the future”. 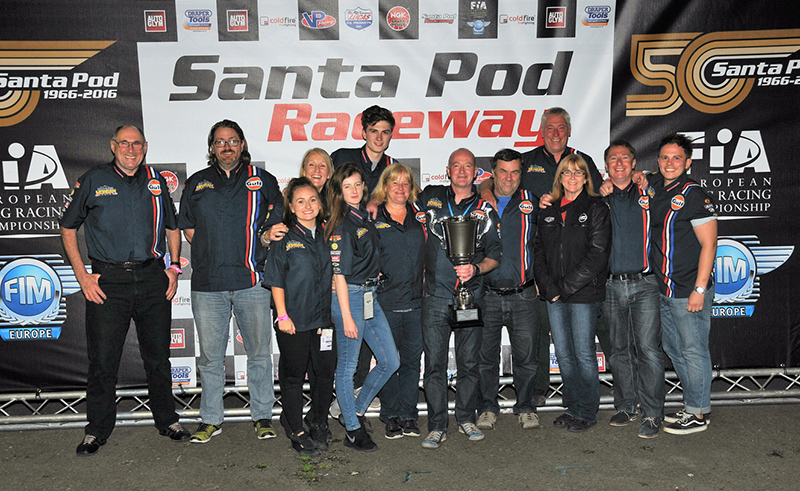 The team’s next event is an attempt to set a new FIM Land Speed Record for the quarter mile standing start in the partially streamlined up to 1600cc category at Elvington Airfield UK.

PUMA ENGINEERING – Manufacturer of the world’s most powerful motorcycle engines

SUPERTOUGH – Custom cases and covers for the Film, TV, Music and Motorsports Industries