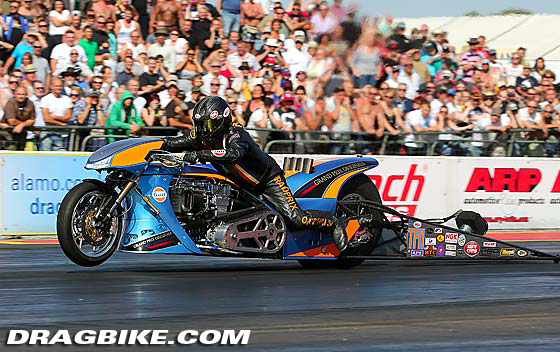 The Gulf Oil – Grand Prix Originals Top Fuel team rider Ian King secured the 2012 European Dragracing Championship crown in style at the final round of the Championship at Santa Pod, UK at the weekend, a record breaking sixth in eleven years.

Despite leading the championship points table from the very start of the Championship to the finish there were an exceptionally tight group of riders at the top of the points leaderboard going into this final event. 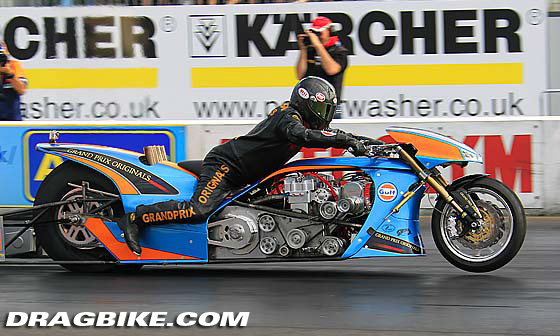 Europe’s most successful Top Fuel Bike team only needed to win one elimination round to secure an unprecedented sixth European Championship but despite qualifying in a solid final number two position, elimination round one was to prove a tense affair for the team mindful of their early exit due to an electrical part malfunction at the previous round in Sweden.

However, King made sure the title was his after blasting down the track to overcome Czech rider Otto Knebl to progress into the semifinals where he was due to enjoy a solo bye run for the final after his planned opponent was a no show due to breakage. 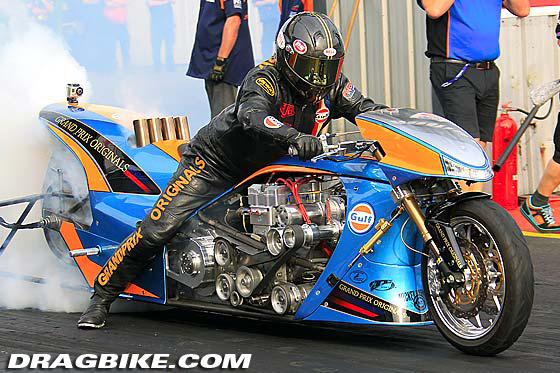 The much anticipated final between Swedish world record holder (and number one qualifier) Peter Svensson and King took place in glorious sunshine in front of a huge crowd of over 30,000, many willing the home rider to prevail.

And it proved a fitting finale for the team and their fans when the tension got the better of the Swedish class veteran who red lit away his chance to win by leaving over 0.2 seconds before the green light.

In any case, King’s reaction of +.02 secs. coupled with a faster elapsed time meant the race would have been his anyhow without the benefit of the red light by his opponent. 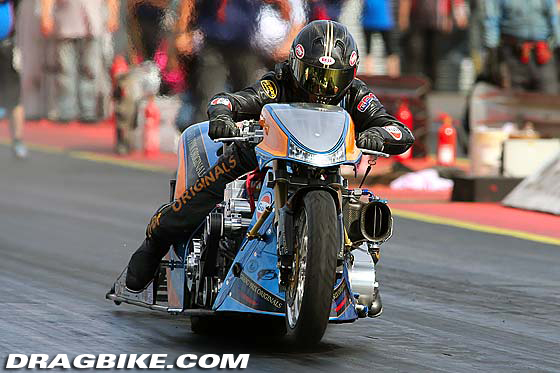 “We always knew the season was going to be a particularly challenging one, the bike sporting so many new innovations is still under development, our competition have been stepping up their performances, and a grueling six events across four countries lay ahead. After a great start at the opening round with a win it seemed that we were to be the form team, but a succession of rain affected events and the unfortunate first round loss in Sweden meant our lead was hardly increased from one event to another”.

“However, our consistency and reliability were key, we won three of the five counting events, and finished runner up in another with the first round loss in Sweden a few weeks ago the only real negative. With some smart tuning and tactical riding at critical moments the team’s efforts were duly rewarded in maintaining our position on top of the table throughout the season”.

“Firstly I’d like to thank my talented and hard working operational team of Debbie, Gerard, Marius, Martin, Michael and Nick, and most importantly my support team of Gulf Oil and Grand Prix Originals and their affiliates across the globe along with our fantastic associate product sponsors for their unwavering support and world leading products. This combined team effort is the sole reason why we were able to clinch this unprecedented sixth title”.

The team will travel back to Santa Pod in two weeks time to take part in the final round of the UK Dragracing Championships where they also hold the points lead looking to make this a dream year for the Gulf Oil – Grand Prix Originals bike.

For more information on the European Championship visit www.speedgroup.eu 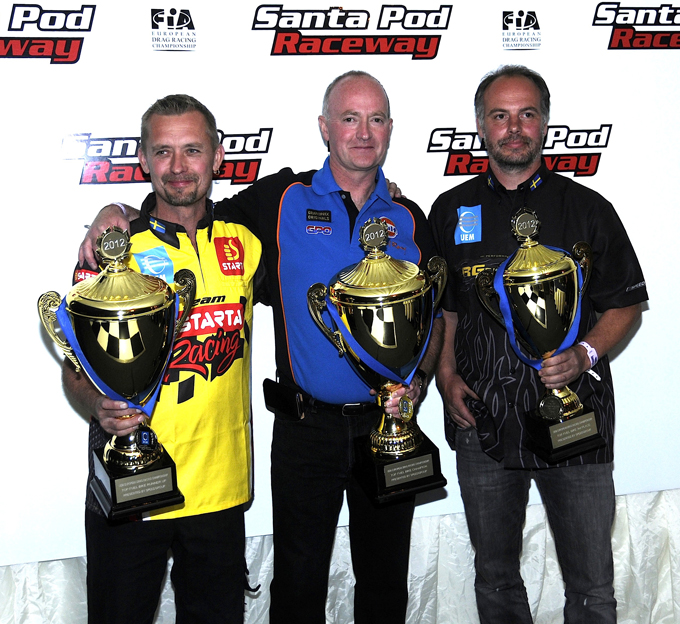 The team is extremely proud to be supported by many leaders in their chosen markets in their challenge for the 2012 European Championship: