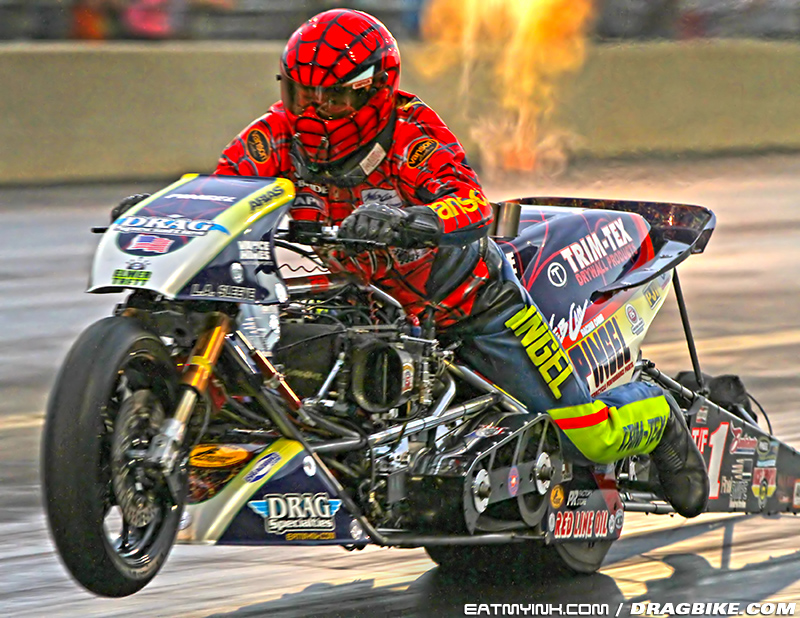 Headlining the prestigious IDBL US Nationals at Atco, NJ for the second year in a row is without a doubt the Top Fuel match race between Larry “Spiderman” McBride and Dave Vantine.  These two are fan favorites no matter where they race and they continue to impress time and time again.

Looking to electrify the crowd of fans during Sunday’s match race the two took to the track for their first match race.  After the tire smoking burnouts were completed and the stage bulbs were lit the crowd witnessed a off/on throttle fest as both riders struggled to hookup their 1500hp machines.  As Larry battled his machine to the finish line a massive explosion erupted and flames went everywhere.  The 14 time top-fuel champion remained calm and safely managed to stop his bike amid all of the fire and debri.

The track safety crews quickly responded and immediately put the fire out and attended to McBrides aid.  Larry was able to safely walk to the ambulance under his own power, however due to some of the potential burns a life flight was called in to quickly transport him to the best burn unit in the area.

The motorcycle drag racing community is known as one big family and before McBride was even released from the hospital racers were already coming together to help our sports great ambassador. Dunigan Racing, DME Racing and Jason Miller of IDBL are starting a GoFundMe account to help Larry with his medical and racing expenses. They will be kicking off the account with a $3,000 donation. We are asking the racing community to come together as they so often do to not only help out a fellow racer, but help out the biggest star and icon this sport has, Larry “Spiderman” McBride.

The Vantine Nitro Sports Team also donated $1,000.00 to Larry at the track!