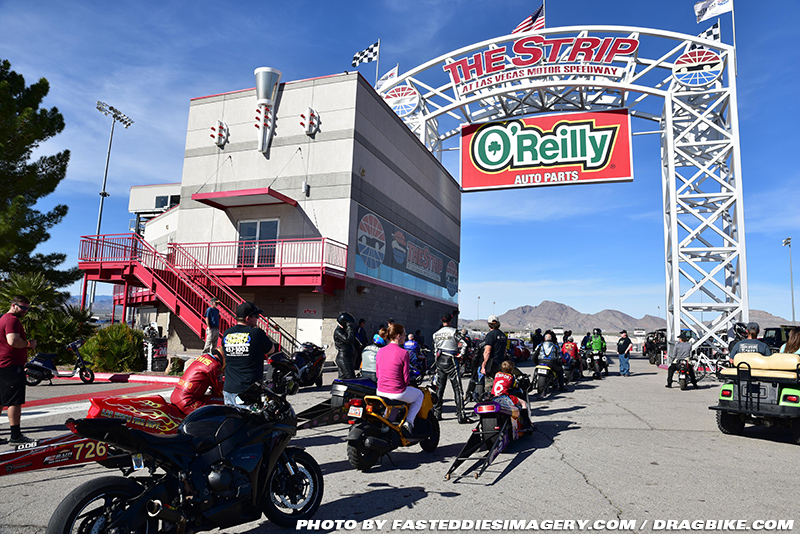 Doug Schumann ended up with the first prize of the weekend with the “Longest Tow” $50 award from Roberts Racing, making the 1100 mile trip from Oregon.  He just kept on winning and made the trip well worth it, taking home the first place trophy and money back with him.

Doug was on of 23 riders from five states who showed up at Las Vegas Motor Speedway as part of the first “Sportsman Motorcycle Bracket Shootout” on Saturday, February 20th. One more showed up to make it 24 but broke earlier in the day at the Test ‘N Tune. This was under the direction of Kahea Woods, a Las Vegas rider, who came up with the idea and put it all together.

He could not have picked a better day for it.  Sunny, light wind and 73 degrees.  The track prep was excellent as always and we got two rounds of qualifying off the best reaction time.  The best reaction time would get the bye run and $100 from Kosman Specialties.

The number one qualifier ended up being one of the Arizona riders, Tyler Anderson of Glendale, laid down a nice .004 on his ’04 Suzuki Hayabusa.  Just behind was Leo Shaver of Las Vegas on his ’87 Kawasaki Ninja with a .005.  Third was the most popular number with three riders with a .008.  Gary Oaks, Las Vegas, was the first to do it on his ’78 Kawasaki KZ.  Dave “Wheels” Wheeler of Murray, Utah was the next to do it on his ’06 Kawasaki ZX-14.  Mike Cragun from Sandy, Utah rounded it out on his ’79 Kawasaki KZ.

Round one saw a lot of teammates and familiar Pacific division matchups.

One more RMR teammate match in the first round saw Tracy Giles, West Valley City, UT getting the single after West Jordan, UT rider Don Nielsen’s Kawasaki broke.  Tracy ran it out with a reaction of .029 and 9.656@140.37mph (9.29).

Kahea Woods .002 reaction time was the best in eliminations all night and wins $100 from gofastbikeparts.com

And all racers will receive a free photo from Eddie Maloney at www.fasteddiesimagery.com

Doug Schumann took on the race organizer Kahea Woods. Both had identical reaction times of .037 but Kahea had problems and let off to give Doug the easy win.

Gary Oaks won the “Best Losing Package” for the second round and received $50 from Web Camshafts with a .104 package.

Tracy Giles stalled it on the line after a .086 reaction time.

With the runner-up prize money Tracy also gets a $400 helmet paint credit from Primo Customs.

Kahea Woods added, “I would like to thank all the companies that made this happen: Kosman Specialties, Lucas Oil, Web Camshafts, Bronze Star Racing, Primo Customs, Fast Eddie Imagery, GoFastBikeParts.com and Roberts Racing.  But most of all, Jeff Foster and all the crew at the world’s best drag strip at The Las Vegas Motor Speedway.

A deep hearted thank you to all the Racers that supported the food drive “Race to Feed the Kids” the my nephew held in conjunction with the race.  You all donated over 400 pounds of food to benefit the Three Square Food Bank, here in the Valley, thank you very much. Thanks again everyone for making this a fun and successful race.”

Photos of this weekend’s race can be viewed at www.fasteddiesimagery.com