After missing the first three Pro Stock Motorcycle events of the season, LE Tonglet will make his 2014 debut at this weekend’s Toyota NHRA Summernationals in Englishtown, N.J. Tonglet will once again be flying the colors of Ken Koretsky’s popular Nitro Fish Apparel brand on his 190-mph. Suzuki. Tonglet missed the first three races of the 2014 NHRA Mello Yello Drag Racing Series in order to complete training for his new position as a member of the Metairie, La. Fire Department.

“A couple months ago, I wasn’t sure I’d be racing at all this year,” Tonglet said. “Then, a few things fell into place. For one, I found some guys at my station that were willing to cover for me. They all like to hunt in the winter so I told them I’d gladly trade with them. The other firefighters at my station all think it’s cool that I race so I’m really grateful that we were able to work this out. I’m also grateful to Kenny [Koretsky] and Nitro Fish for continuing to support our team. We wouldn’t be doing this without them.”

Tonglet will be riding the unique aluminum-framed Suzuki that was last campaigned by his older brother and crew chief, GT, during the 2011 season. That bike was called into service after LE’s championship Suzuki was damaged in an accident when the team was attempting to license another rider.

“We tested this bike last week and it worked very well,” Tonglet said. “The aluminum frame reacts a little differently than my old bike but it felt very smooth and I think we’ve got something we can work with. For me, it was great just to get back on a bike and make some runs so I could find my rhythm again. I have ridden a few street bikes lately but nothing compares to a Pro Stock Motorcycle.”

Tonglet is also making his first appearance since an NHRA rules revision allowed Suzuki entries to build bigger engines., moving the maximum from 107-cid to 113-cid. Tonglet believes the new combination will enable him to improve on his career best performances of 6.825-seconds and 196.27-mph, both set at the 2011 Gainesville race.

“The new engines should definitely make us better,” he said. “We have one of the new engines in our trailer and it’s fresh and ready to go. I’m excited to see what we can do with it.”

In Englishtown, Tongelt’s Suzuki won’t be the only bike in the Pro Stock Motorcycle field flying the Nitro Fish Apparel banner. Reigning world champion Matt Smith will have Nitro Fish as a major sponsor of his MSR Racing Buell while Smith’s teammates, Angie Smith, John Hall, and Scotty Pollacheck, will feature associated sponsorship from the popular brand on their Buell entries.

“The Summernationals in Englishtown is not only one of my home events, but it is also a very important market for the Nitro Fish brand, said Nitro Fish founder Ken Koretsky. “We wanted to make sure that we got a lot of exposure so we decided that we’d have a whole school of Nitro Fish bikes there. We’ll have the Nitro Fish colors on Matt’s bike at several events this season and I couldn’t be happier. Matt and LE are both world champions and it wouldn’t surprise me to see either one of them win the race.”

The Toyota NHRA Summernationals will take place at Old Bridge Township Raceway Park in Englishtown, N.J, May 29-June 1. Pro Stock Motorcycles will qualify at 4 p.m. and 6:15 p.m. on Friday and 12:45 p.m. and 3:15 p.m. on Saturday. Final eliminations will begin at 11 a.m. on Sunday. 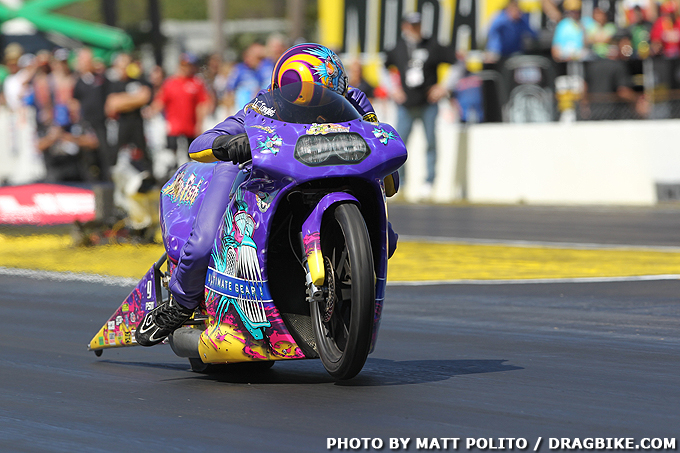 About Nitro Fish Apparel
Nitro Fish Apparel is owned and operated by Kenny Koretsky, a Pennsylvania-based businessman and longtime NHRA drag racer. Koretsky has driven both Top Fuel Dragsters as well as Pro Stock in a career that dates back to 1976. He is the only driver to qualify both a Top Fuel Dragster and a Pro Stock Car in the same NHRA national event, a feat he accomplished in Phoenix in 1990. Koretsky, whose other business interests include trucking, land development, and a line of full-service car washes, purchased the Nitro Fish brand in 2004. He has since used the brand to help promote a number of racers including two-time NHRA Funny Car champion Tony Pedregon, two-time Pro Stock Motorcycle champion Matt Smith, and 2010 NHRA Pro Stock Motorcycle champion LE Tonglet among others. Featuring a wide selection of T-shirts, hats, decals, die cast replicas and other memorabilia, the Nitro Fish Apparel line is available at trackside locations during select NHRA Mello Yello Drag Racing Series events or online at www.nitrofish.com.