Two wins and three runner-ups in five final round appearances at 2016 national events prior to this past weekend for Dustin Lee. That type of season is one that most racers would give just about anything for. But for Dustin Lee it was a disappointing start to the 2016 season. When you’re the reigning Dragbike.com BAMF winner (accumulating the highest point total to date) your standards are a little altered. 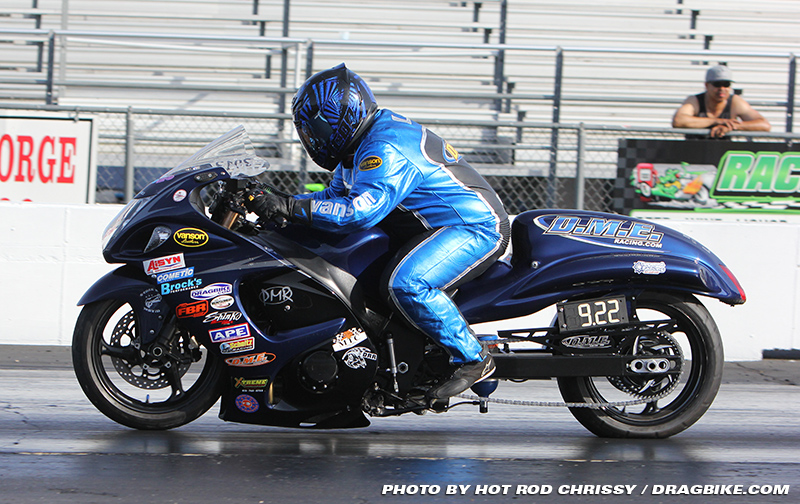 However, this past weekend at the IDBL Summer Nationals Lee Racing got back on track and met the high standards that they have. “I’ve been struggling to get a grasp on my bikes the first couple races, but after figuring out some tuning issues the last two races I finally felt like they were up to snuff,” said the Tennessee native. On Saturday Dustin would qualify for the Crazy 8’s, 5.60, and Top Sportsman classes while also competing in both Street and Pro ET. 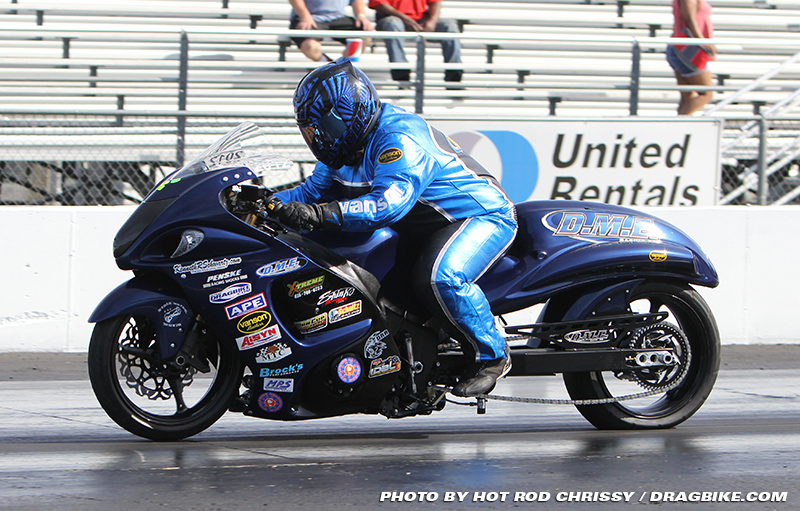 Known for his starting line prowess, Lee wreaked havoc on the Pro ET field all day Saturday. With four .01X lights in the first six rounds of competition he wasn’t cutting the competition any slack. His .013 light during his bye run in round six gave him the information he needed to back off the tree a smidge. But his .040 light in round seven was good enough for an almost one tenth advantage at the starting line allowing him the easy win to the finals. His opponent in the Pro ET final would be none other than Maryland legend Shayne Proctor. Proctor is well known for his vast array of motorcycle skills and has won numerous races and championships. The $3,000 top prize was weighing heavy on both racers minds as Lee missed the tree first with an .054, followed by Proctor’s .047 (for these two racers, that’s considered “missing” the tree). With only a slight deficit on the starting line Lee put his faith in the bike and held the throttle to the stripe running 9.24 on his 9.23 dial for the win. 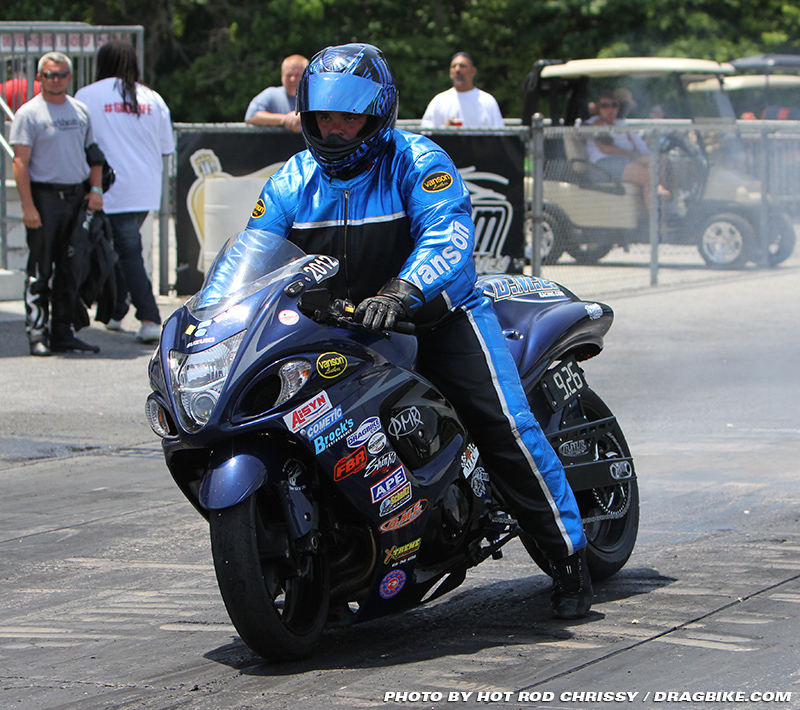 Whenever a sportsman racer can get a win under their belt on Saturday of the race weekend, they know it’s going to be a good weekend. Sunday the temperatures would be even hotter as Lee would enter eliminations in five different classes. The day got started on the right foot as he was able to dispatch former MIROCK Top Sportsman champion Brian Canoles in round one of Top Sportsman. His .003 reaction time, coupled with a dead on seven-run gave the 2015 BAMF a ten-thousandth package to start the day off. As the day heated up and racing progressed Dustin kept turning on the win lights…. Eventually bowing out in Top Sportsman and 5.60 along the way. “Don’t get me wrong, I hate losing, but sometimes when you’re still in all five classes and start going rounds it gets pretty tough. So when I got knocked out in Top Sportsman and 5.60 I knew I’d be able to refocus on the classes I was still in,” said the smiling Tennessean. 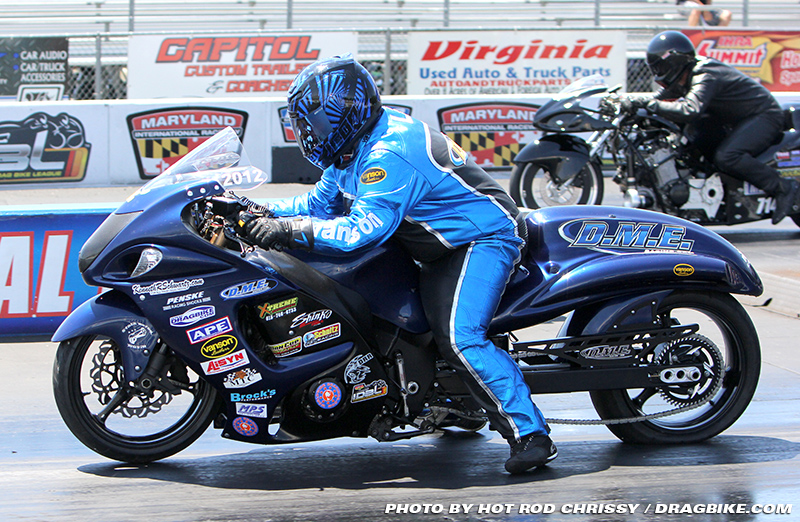 Switching gears to the Crazy 8’s class Dustin was able to get a rematch against Robert Parker in the second round. At the first race both racers battled fiercely to the final round where Parker once again took the win over Dustin in 8.88. However, this time Parker pushed a little too hard and turned on the red light, giving Lee the pass to round three. Lee continued to garner starting line advantages to make it all the way to the finals and take the IDBL points lead along the way. Racing veteran racer Rickey Gadson in the finals is no small task for any racer, but unfortunately Lee’s clutch pulled him through the beams a tick too early turning on the dreaded red light.
But there was no time to dwell on the loss as Lee continued to progress through the Pro ET field. Sunday’s opponents were no slouches either, as Lee had to dispatch names like Parker, Crawford, Knight, and the ultra-tough Mike Schulz at three bikes. The matchup with Schulz was just as “titantic” as the previous night’s matchup with Shayne Proctor and with the ticket to his third final of the weekend Dustin was high on adrenaline.

The final round would be somewhat anti-climactic as Lee laid down a solid .032 reaction time, which was more than enough to cover Larry Knosp’s sleepy .184 light. Tennessee ‘Titan’ Lee had finally found his “mojo” and even met his own high expectations for the weekend. Three final rounds, two wins, and now once again on top of the Dragbike.com BAMF standings…. Will Lee be the first repeat BAMF Champion, only time will tell! 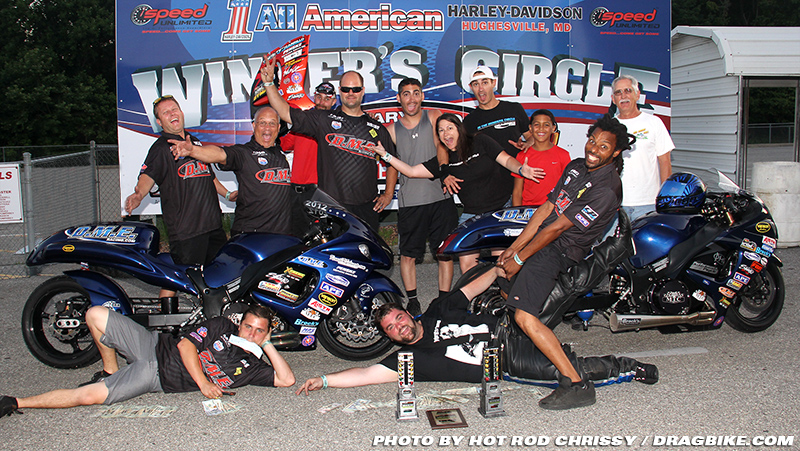 Lee Racing would like to thank first and foremost his family and friends/teammates for their continued support. None of this would be possible without the support of his sponsors and their amazing companies. Thanks to: DME Racing, MTC Engineering, Xtreme Motorsports, Brock’s Performance, Psycle Performance, APE, Lee’s Cycle, ECS Performance, Schnitz Racing, WorldWide Bearings, The FBR Shop, Vanson Leathers, Web Cams, Penske Shocks, 1 Stop Speed, Schwartz Law Firm, PMR Components, Dragbike.com.