A Look into A Pro’s Not-So-Stock Racing Machine

A Look into A Pro’s Not-So-Stock Racing Machine

Motorcycle drag racing is a pure test of man and machine. In the few seconds that it takes to ride a quarter mile, the bike’s engine is pushed to its physical limits, and the rider’s body is subjected to immense forces. Blood pumping and fuel igniting when the lights go green, speed and adrenaline are simply a byproduct of the sport. 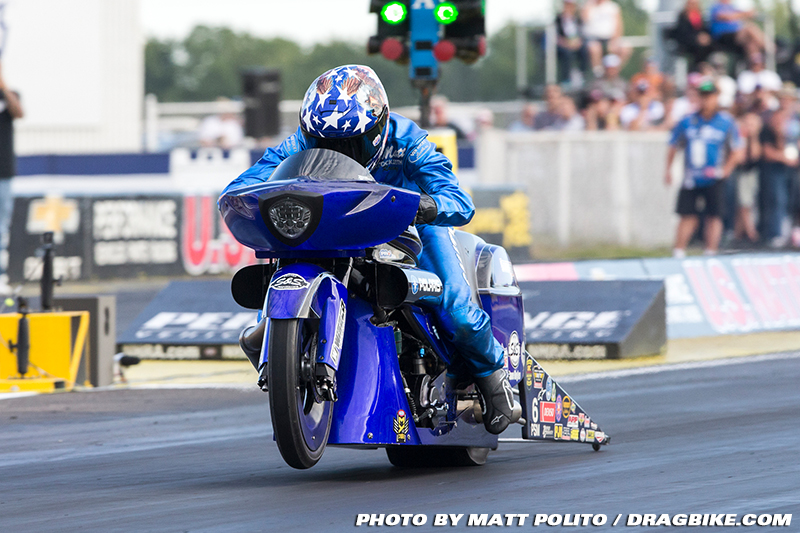 Let’s start off with how these bikes look.

When you see a NHRA Pro Stock motorcycle, the first thing that grabs your attention is its low-slung, long-wheelbase presence. This is because the frame is a custom-fabricated unit built specifically for the job.

The frame Matt Smith uses for his bike is made from 4130 chromoly steel, which has been welded together by Dog Fabrication & Design out of Mooresville, North Carolina. The swooping, streamlined bodywork mimics a production Victory Magnum motorcycle and is made completely from carbon fiber, courtesy of the composite masters at Kenny’s Components. The airbox and throttle bodies are located where you would normally find the gas tank on a production bike. The gas tank on Matt’s bike is an aluminum fuel cell nestled in the frame behind the engine. 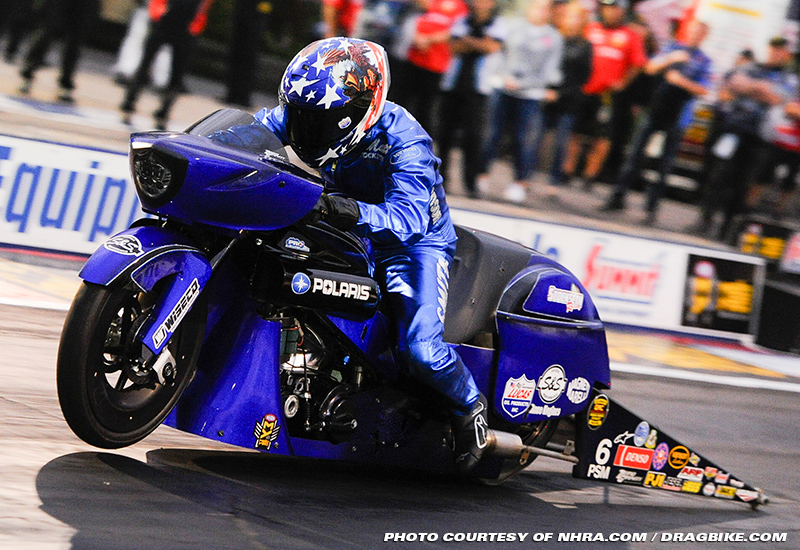 There is no rear suspension on Matt’s bike, but a giant, 10-inch-wide Mickey Thompson rear tire allows the bike to find massive amounts of grip. The front of the bike, on the other hand, still has some damping to help control this wild steed. A front inverted fork made by Traxxion Dynamics keeps the handling in check. When you reach the near-200 MPH speeds that these bikes are capable of, being able to stop becomes increasingly more important. Performance Machine brake calipers and rotors are fitted to the front and rear of the bike to take care of the intense stopping duties.

So, you may be thinking, “Why is the racing class called “Pro Stock” if there isn’t anything stock about the bike?” Well, the most critical part of the bike – the engine – is stock. Sort of. Alright, so it’s not stock at all.

The engine is only “stock” because its mechanical configuration is similar to a production bike’s engine. For example, on Matt’s bike, the engine must be a pushrod-operated V-Twin. This is because his bike is representative of a Victory production motorcycle. Victory motorcycles, in showroom-fresh guise, have large-displacement twin-cylinder engines. The pistons cycle in a “V” orientation and the engine utilizes pushrods to operate the valve train. However, this is where the similarities between “Stock” and “Pro Stock” end. 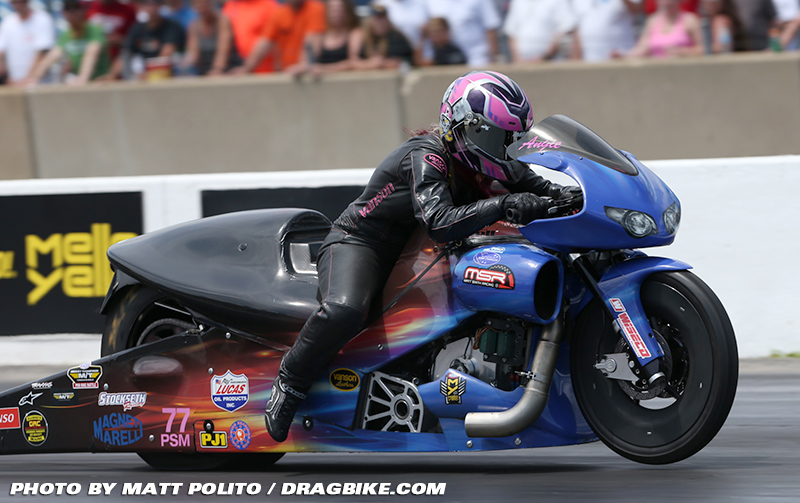 The engine fitted to Matt’s race bike is a brand-new design which was created in collaboration with S&S Cycles. Matt played a crucial part in the development process of this engine. Where a stock Victory engine has a displacement of 106 cubic inches, Matt’s S&S race engine is punched out all the way 160 cubic inches.

While a larger displacement certainly helps in finding extra power, it isn’t the only thing that’s going on inside this engine. The engine utilizes specially-designed S&S heads and camshafts. A set of Wiseco pistons handle the incredible combustion stresses found inside of this fire-breathing powerplant.

“We designed the pistons with Wiseco to fit our bore and our cylinder head. I’ve worked with Wiseco this year and I’ve not had one piston failure. I have five of these motors right now and they all have the same set of pistons that we started in January with. I think that speaks volumes – we haven’t had to replace anything,” Matt says. 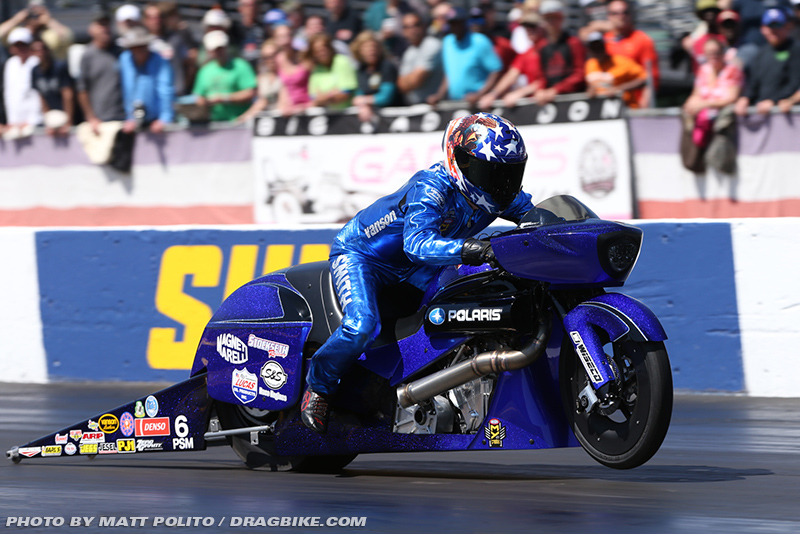 That feat alone is incredible. You see, these race engines don’t exactly live pampered lives. They are asked to perform at their upper-most mechanical limits race-in and race-out. Where a stock production engine redlines at 5,500 RPM, Matt’s engine can go in excess of 10,000 RPM.

The higher RPM is possible because the internal engine components, mainly in the valvetrain, are so much stiffer than in a production engine. It should be noted that there is still a limit to the engine’s durability when pushed to these speeds, as Matt explains: “We couldn’t run that [engine] for a long time at that kind of RPM. It’s simply 6 seconds down the race track and then we shut it off.”

A stock Victory 106 cubic inch engine puts out around 88 horsepower and 106 lb-ft of torque. But on Matt’s pro stock race bike? “This is the first year for this engine so we’re still making progress with it. The last time we went on the dyno and we made 338 horsepower at the rear tire,” Matt states. Paired to that stratospheric horsepower number is a torque readout of 215 lb-ft.

Constructing a bike like Matt’s is an ongoing pursuit of tuning, modifying, and refining. Improvements are constantly being made to ensure that the machine stays competitive on the track. Matt is an experienced mechanic as well as racer, and does some of the fabrication and mechanical work himself. However, he also employs the help of a few professional mechanics.

“We have a cylinder head guy who’s always at home, working on cylinder heads to find us more power. We have another guy that travels with us that works on the bikes full-time. We have two part-time guys that we fly in every race to help work on the motorcycles,” Matt says.

As you can see, it takes a team of professionals to keep the bikes in check from race to race. At any given time, Matt’s team has two complete race bikes ready to roll. This ensures that if anything goes awry with the first bike during a race weekend, there is another bike on standby to finish the job.

You have to wonder what it’s like to ride one of these ridiculously powerful machines. Well, there’s no better person to ask than someone who does it for a career: Matt Smith.

“Gosh, I’ve been doing it so long it’s gotten natural. It’s a thrill, but when you’ve done it for so long it just feels so natural. I go out there and do my job.”

With sixteen races in a season, that is the attitude you must have toward such an adrenaline-packed profession. With a bike that’s in tip-top mechanical condition, there’s only one thing left to complete the race-winning formula: a rider that finds it is only second nature to go fast.