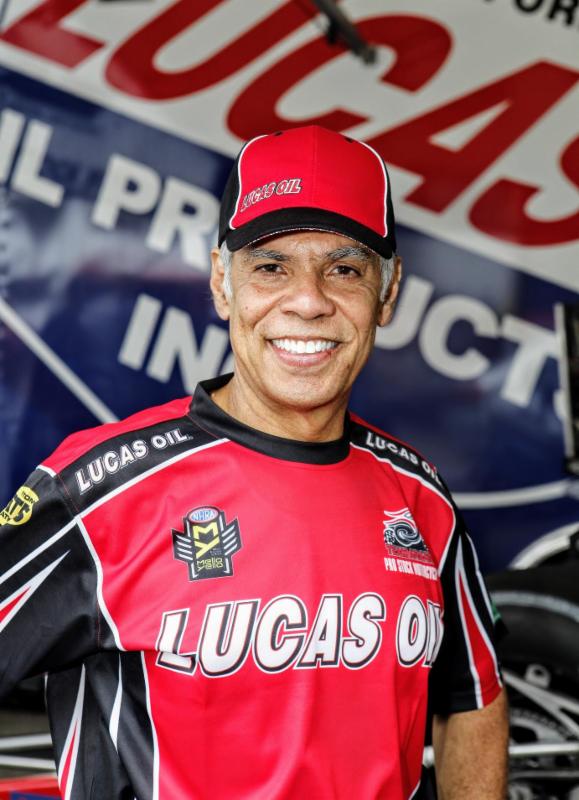 Traveling from the Mello Yello Drag Racing Series race in Englishtown, N.J., two weeks ago, Arana Sr.’s race trailer had a tire blowout near Hersey, Penn. While trying to change the tire, Arana Sr., a native of Miami, suffered a torn rotator cuff in his left shoulder.

Arana Sr. expects to be out of NHRA competition for at least three months, but the longtime Lucas Oil racing ambassador will still be visible at the races as he shifts his focus to helping son Hector Arana Jr., rider of the Lucas Oil Racing TV Buell. The younger Arana is riding a performance surge, which mostrecently featured a trip to the final round in Englishtown.

“Unfortunately, I can’t compete right now,” Arana Sr. said. “We’re hoping I can be back on the bike in time for the Countdown to the Championship but we’ll see when it gets closer. I had one tendon completely torn off and two more that had bad tears. I had surgery as soon as possible to get the healing process started.”

Arana Sr. hasn’t missed an NHRA national event in almost a decade but returning to Norwalk this weekend, even off the bike, is soothing for him. The ever-affable racer garnered his first NHRA national event win in Norwalk in 2008 and there’s also the $1 for one pound of ice cream famously sold at the track that’s calling him back.

“At least I can eat all the ice cream I want,” Arana said. “I would much rather be racing, but for now I can put all my energy on helping my son with his bike and getting him a win, so it’s not all bad news. How can you go wrong with $1 for a pound ice cream? It gets hot here so you can go get some ice cream and put on a smile.

“I’m happy to be in Norwalk. The facility is awesome and the fans are great. The fans here are hardcore drag racing fans. I got my first Wally (trophy) here, so it will always have a special place in my heart.”