Hector Arana Jr. remains red-hot on his Lucas Oil Racing TV Buell, powering to yet another runner-up finish Sunday at the 20th annual Fallen Patriots NHRA Route 66 Nationals in Joliet, Ill. Only one rider has been better than Arana lately, LE Tonglet, who managed to edge him in the final for his fourth victory in six races this year.

“Not bad at all,” Arana said. “You have to hand it to LE, he’s been nearly perfect, but we are definitely right there. I really wish we could have brought the win home today for my dad but we gave it our best.” 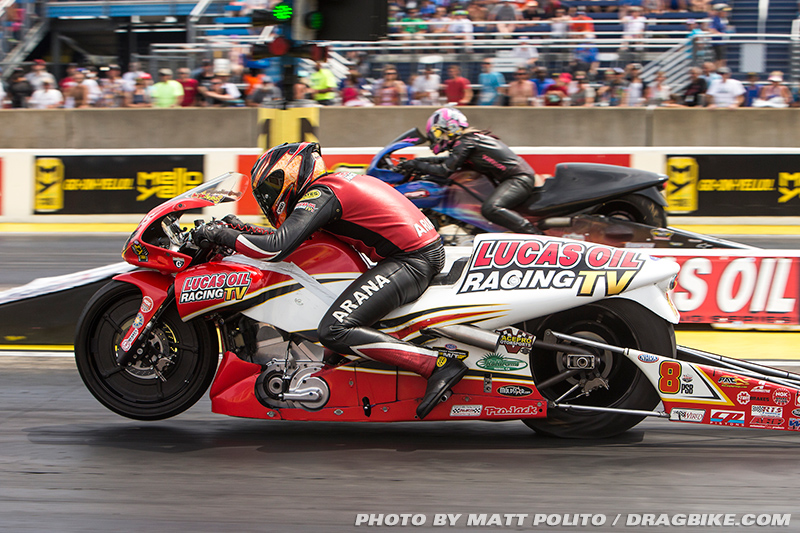 Arana and crew produced a competitive 6.878 at 193.29 mph in the trophy round, just behind Tonglet’s 6.835 at 195.99 mph. Arana’s father and teammate, Hector Arana Sr., is home recovering from shoulder surgery.

“We were dead-even off the starting line but we just missed it a little bit on the tune-up,” Arana said. “We are definitely on the right track and moving forward so I know we will have something for them come these next few races.”

Sunday’s racing began with a first-round victory over three-time world champion Angelle Sampey, who never had a chance with Arana leaving .034 seconds ahead and cruising away to an easy win, his 6.852 at 195.90 mph beating Sampey’s 6.972 at 188.73 mph.

“Overall, we are very happy and I was able to leave first in three out of four rounds so I’m getting my riding back also,” Arana said. “The challenge of Pro Stock Motorcycle is that there always is something you can do better. No one ever leaves the racetrack saying they had a perfect day. It just doesn’t happen. But that’s what drives us.”