Not only is this the final race of the 2016 NHRA Mello Yello Drag Racing Series season, but it’s also the final time Arana Jr. will be racing as a bachelor.

Arana Jr., 27, is getting married Dec. 10 in New York to fiancé Nicole Nobile.

“It’s my last race as an unmarried guy and that’s exciting,” Arana Jr. said. “I’m super thrilled to be getting married. I’m marrying my best friend, Nicole Nobile. She won’t be Nicole Nobile for long though — she’ll be Nicole Arana soon — but she’ll also always be a Nobile, and I love her for that. I’m excited that my family is growing. I can’t wait.” 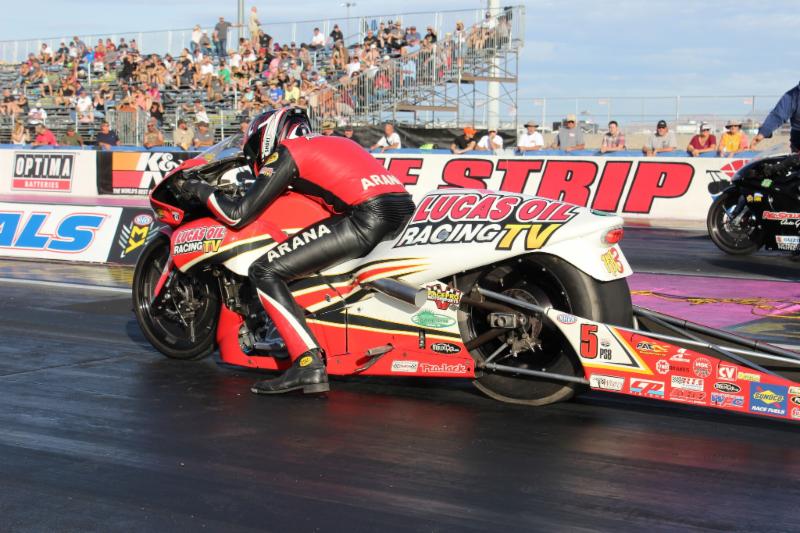 First things first, as Arana Jr. will be looking to take some late-season momentum to Pomona. After a tough start to the Countdown to the Championship, Arana Jr. has qualified seventh or better in each of the last three races, racing to the quarterfinals at the last stop in Las Vegas. Plus, Arana Jr. shook off some red-light blues that had plagued him this season.

Closing out the year with a solid performance in Pomona is his primary goal, and Arana Jr. hopes to score his first victory of the season, too.

“It would be awesome to be able to get a race win for the year, to go out on top and give everybody a little preview of what we have for next year,” Arana Jr. said. “I feel really good about next year. I’m excited. I’m also excited for what Pomona holds for us. Like I said, I feel like I’m 100 percent confident that I got over the hump as far as my riding goes. I’m ready.

“Lucas Oil, who has sponsored me my whole career and my dad also, they have a big office in Corona so it’s a big race for them as well because a lot of the employees come out and cheer for us. There’s always a good vibe in Pomona and I want to add to that feeling.”