Arana beat defending class champion Andrew Hines in the first round before knocking off No. 2 qualifier Jim Underdahl in the second. Then he beat son and national speed record-holder Hector Jr. in the semifinals before taking down three-time PSM champion Eddie Krawiec in the final round.

Arana toiled in the PSM class for many years before partnering with Forrest and Charlotte Lucas and Lucas Oil Products. He earned his first win in 2008 and then won five more times in 2009, capping a remarkable year with the championship. 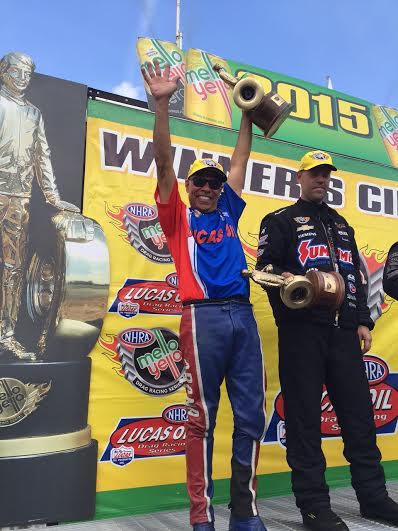 He raced to 11 final rounds in the years since, including racing Hector Jr. in Chicago in 2014, but was unable to break through again until Sunday to end a drought of 86 races.

“It makes me feel great for everyone on our team,” Arana said. “I take care of Jr.’s bikes first and then mine. What I did for this event, I paid more attention to my bike, to my program. That’s what I need to do more of, take care of me.”

“We were able to stay consistent on every run,” Arana said. “We didn’t deviate that much, so we have a good tune-up. It looks like my bike is coming around at the right time. We’re going to keep looking forward and narrow this bike to be perfect.”