A frustrated Hector Arana Sr. vows to return his Lucas Oil Buell to prominence after a difficult NHRA Sonoma Nationals this weekend at Sonoma Raceway.

Arana has performed well this season, winning in Atlanta and qualifying in the top half of the field in seven of the eight NHRA Mello Yello Drag Racing Series Pro Stock Motorcycle races in 2015.
He certainly didn’t expect to struggle in Sonoma, even after qualifying No. 7.

“We did well in Denver,” Arana said, “so we came here with high hopes to do even beter.”

But Arana wasn’t able to dip into the 6.80-second zone in Sonoma, and it cost him in the first round against Jim Underdahl. 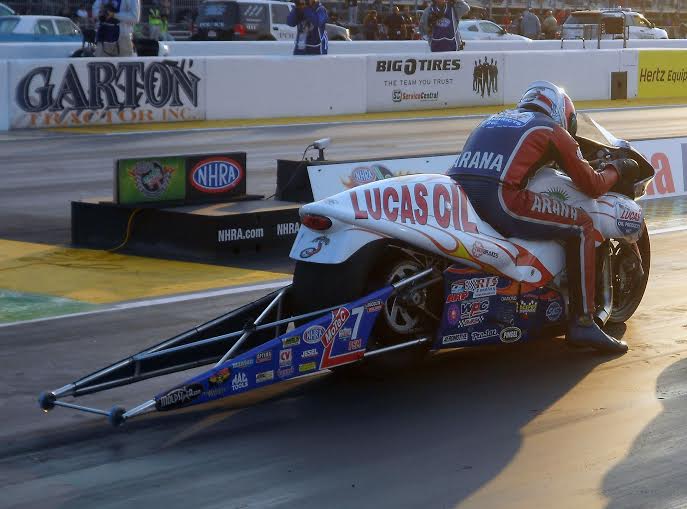 “I know this bike should be able to run in the .80s,” Arana said. “I struggled here all weekend. No matter what I do, it doesn’t seem to respond to my tune-ups. We’ll just have to go back and look at something else. The problem’s got to be somewhere: Harness, software, something. It doesn’t respond. It shouldn’t be running like this.”

The Pro Stock Motorcycle class gets a couple of weekends off before returning for the Lucas Oil NHRA Nationals on Aug. 21-23 at Brainerd International Raceway.

“We haven’t been to Brainerd for a couple years, so everyone will be on the same level there,” Arana said. “We need to get back to work and figure this bike out so we can do well for Forrest and Charlotte Lucas and everyone at Lucas Oil. It’s an important race for them and for us, too.”
QUALIFYING

Hector Arana Sr. aiming for round-win No. 200 and beyond

Arana, who qualified No. 7 for Sunday’s eliminations, is sitting on 199 round-wins in his long career. If he beats Jim Underdahl in the first round, he will top the 200-win mark.

“I hope we can get that one and then three more,” Arana said. “I didn’t know I had 199 round-wins until earlier this week, but that doesn’t change how hard we work and how we race on Sunday. Of course I’d like to have 200 round-wins, and I’d love to get it out of the way tomorrow.”

Arana started his career in 1990 and began racing full time in 1994. After some lean years at the turn of the century, he partnered with Lucas Oil and began to show marked improvement in his performance. 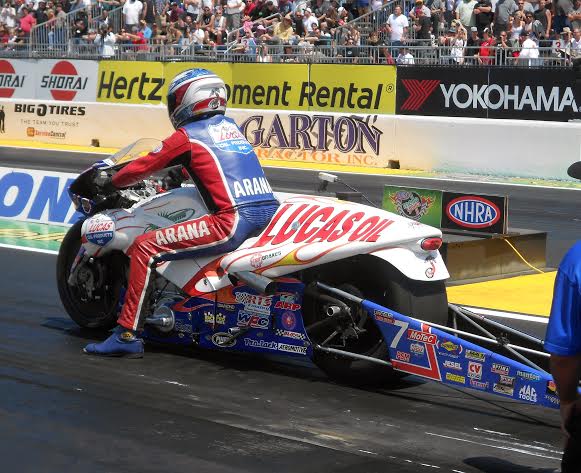 Arana, 57, has qualified for 129 races in a row, eighth-longest among active NHRA racers and 19th all time. He won in Atlanta to snap a five-year winless drought and nearly even his win-loss record, which stands at 199-200.

“Overall, it’s been a good weekend so far,” Arana said. “We were able to fix the motors that had some damage in Denver, and they’ve been good here in Sonoma. We just need to focus on the bike to get it running as good as it can, and I need to focus on one round at a time tomorrow.”