Racing came to a halt at 11pm and all unfinished classes with commence on Monday morning at 9am.

Larry McBride ran an impressive first qualifier with a  5.83 @ 247.29 MPH to lead the Pingel Top Fuel class after Q-1. Korry Hogan occupies the #2 spot with a 6.022 , despite causing an oil down to kick off the qualifying session. Mitch Brown made an great licensing run aboard the Dennis Bradley’s bike running a 7.213.

Eric McKinney in Falicon Performance Pro Mod class posted the low qualifying number of 4.00 to leave his teammate of Ashley Owned int he #2 spot with a 4.04.

Travis Davis blew everyone away in the Nitrous Express Pro Open class qualifying with a 6.347 elapsed time edging out the #1 spot over Chris Cutsinger who ran a 6.348

Mark Gargiulo’s 6.88 was good enough for the low qualifier Friday night during APE Pro Street qualifying. With a field of 32 bikes, we except the #1 qualifying number to drop into the 6.70’s

Johnny Dobrin’s 7.83 @ 190.75 leads the pack in the Shinko/WPS Real Street qualifying after Q-1. Champion Anibal Merced following in the #2 spot witha 7.848. Noticeably missing from the top half of the filed was Roger Starrette how had some issues to put him in the bottom of the 12 bike field.

Sportsman had two qualifiers Friday night. Second round of qualifying came to a halt after Jalessa Minor went down on the big end. She suffered only road rash and is expected to make a return to the track on Saturday. Chester Lee leads Grothus Ultra 460 with a 4.603. Champion Mike Konopacki leads with Top Gas with a 8.20. Matt MSith leads MTC Engineering Super Comp with a 8.904. Bryan Pryer leads Worldwide Bearing Crazy 8’s with a 8.885. Kevin Haag leads Wiesco Street Fighter with a 9.506. Alex Hughes leads Super Eliminator with a 8.007. D&G Chassis is lead by Vance Houdyshell.

We had a special event before racing started when UK racers Lizz McCarthy and Kevin Charmen tied the knot on the starting line before Top Fuel’s first qualifier! Congratulations to them both. 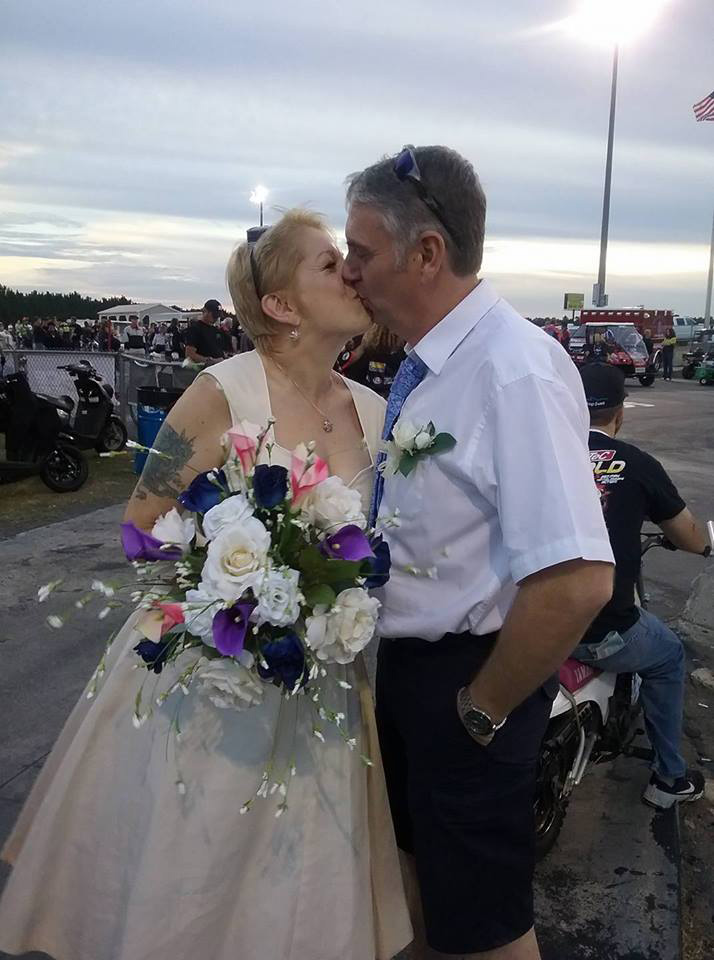 Eliminations for the second half of yesterday’s DME sponsored $10,000, All Star Shootout commenced on time Friday afternoon, picking up the action with E-3 pairings. The racers were primed and ready when they hear the call to the lanes by ManCup veteran announcer Bill Hahn Jr.

Rodney Williford lead things off with a sound defeat of Bud Yoder, 6.87 to a troubled 8.84 elapsed time. Joey Gladstone made it to the big stripe just ahead of Jamie Lopes, 6.84 to 6.95 to advance to the semi final round match up with Rodney Williford.

On the other side of the ladder, Ehren Litton drilled the tree with a perfect .000 light against Jordan Haase, then out ran him 6.87 to Jordan’s 7.06 to advance to the semi-final round.

Michael Bayes, defeated Mark Gargiulo in a close one, 6.87 to 6.94 respectively. The racers returned to the pit areas and with much anticipation were ready for the next call about 90 minutes later. The final four were the toughest of the tough guys in Pro Street, 2016.

The first pair up in the semi-final round was Joey Gladstone Vs Rodney Williford. Joey’s .027 reaction time was good, but Rodney got the better of Joey on the tree with a slight advantage .022, then widened his lead over Joey with a stunning 6.77 elapsed time to Joey’s 6.86, ending DME’s title hopes for the All Star Shootout.

Michael Bayes was then defeated by Ehren Litton, 7.98 to 6.81 to set up an all Williford Racing finale with $10,000 on the line: Rodney Williford Vs Ehren Litton. Friends yes, but on the starting line there are no “friends.”

The final round of the DME All Star Shootout took place at 4:49 PM, with excitement in the air for all in view. After their burn outs, Ehren moved in first, followed by Rodney and in a flash they were gone. Rodney Williford in the left lane started drifting to the right by mid track and had to course correct and that was all it took: Ehren Litton was gone like a summer breeze. A cool $10,000 breeze.

Gallery by Tom McCarthy – To purchase prints or see more of his work visit Digital Image Now on Facebook. 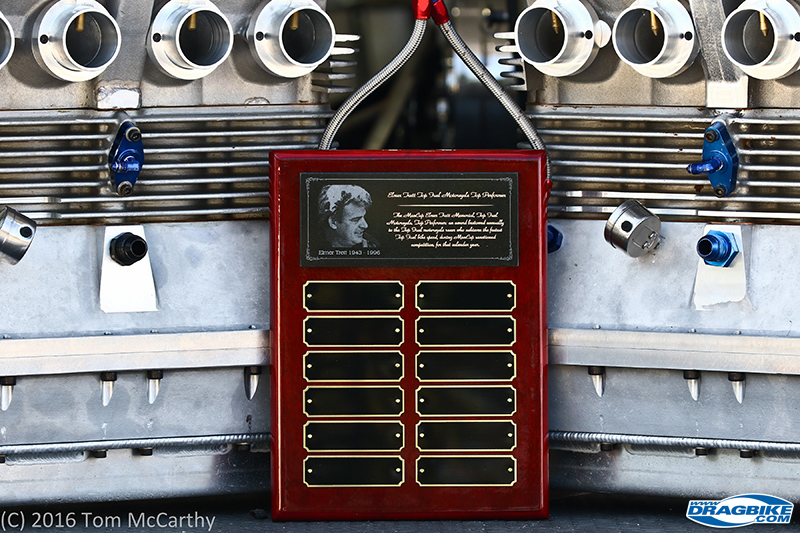 The plaque has twelve blank name plates on it and features a black Granite block area atop it with the likeness of Elmer Trett, laser engraved into it. Beginning with the 2017 Man Cup season opening race, the Top Fuel racer with the fastest MPH from the 2016 season will be presented this plaque with their name and top MPH for the previous the season.

Mr. Trett, who was inducted into the AMA Motorcycle Hall Of Fame in 2000, lost his life tragically in September of 1996 in a racing mishap. Prior to that, Elmer Trett devoted two decades of his life spanning from 1976 to 1996, in the pursuit of the top performance for Top Fuel motorcycles. Elmer was the first in sanctioned competition to crest the 200 MPH barrier; a feat he achieved in 1983, that landed him in the Guinness Book of World Records at that time. Elmer was also the first motorcycle drag racer to crest the 210, 220, 230 and 235mph barriers in competition.

The race within a race, the DME $10,000 All Star Shootout has been a big hit with the ManCup Pro Street racers. The specialty event, the first of its kind, began on Thursday, during the 40th annual, ManCup Mann Hill Garage World Finals. The World Finals, expanded from a 3 day event to a five day event in 2016, has so far been a huge success for motorcycle drag racing.

The early Test & Tune on Wednesday was a flurry of activity that evolved into a sizable P/St. bike test & tune that saw many of the Pro Street teams testing the track and their combinations a day prior to the Thursday competition. Despite the fact that it was open test and tune for all bikes, very few sportsman racers were able to take time off from work and join in the testing during the mid-week.

On Thursday, the first of two qualifying sessions kicked off just after 1pm with 29 motorcycles entered into the field. After the smoke cleared from the two sessions, Rodney Williford emerged as the #1 qualifier with a very stout, 6.79 @ 217 mph. High MPH for the qualifiers was Ehren Litten with a whomping 220.48 MPH blast that got his competitors attention.

Track prep was excellent for the shoot-out with many racers exhibiting power wheel stands. SGMP and Man Cup went the extra mile in preparing for this race. Jeremy Teasley’s 6.77 in testing on Wednesday showed that as did Joey Gladstone’s 6.85@217, fresh off the trailer Wednesday afternoon.

With Q-1 and Q-2 ran in quick succession in the afternoon, E-1 for the DME All-Star Shootout began and the 29 bike field paired down through E-1 and E-2. The Ronnie Mitchell Racing camp had the biggest win of the day when Michael Bayes ran a 6.894 at 213 mph to finally land Michael in the 6.80 zone he has been shooting for. Bayes celebrated after the round with a cigar he has been holding onto all year just for this occasion.

At the conclusion of the first two rounds of eliminations, Rodney Williford Vs Bud Yoder, Joey Gladstone Vs J Lopes, Ehren Litton Vs Jordan Haase, and Michael Bayes vs Mark Gargiulo are paired up for E-3 which will take place on Friday afternoon, prior to ManCup Q-1 for the professional classes.

After the DME All Star Shoot Out, the entire pit area of DME played host to all who wished to attend and a BBQ banquet was served up featuring pulled-pork, BBQ Chicken, baked beans and all the fix’ns. No one walked away hungry and a good time was had by all.

All things considered, the DME All Star Shoot Out with the ManCup at the World Finals has been a big hit with all in attendance. E-3 is slated for 1pm Friday and it’s to be complete by 5pm, just prior to Q-1 for all professional classes of ManCup competition. Can motorcycle drag racing live up to a five day event similar to the NHRA Indy “Big Go?” That’s a big 10-4.

Day one is in the books for the ManCup Mann Hill Garage World Finals.

About two dozen motorcycles took advantage of the early open Test & Tune today on Wednesday.  The bulk of the drag bikes testing today were Pro Street motorcycles, and a T/F Twin driven by a racer under the guidance of Tak Shigematsu.

Joey Gladstone unloaded a stout 6.85 @ 217 mph right off the trailer.  Not to be out done, Jeremy Teasley was testing several bikes today and uncorked a stout 6.77 @ 214 MPH.

Tomorrow the gates will open at 9AM, with open T&T set to commence at 11AM.

The 2016 Man Cup 40th annual Mann Hill Garage World Finals presented by Kibblewhite Precision Machining are in the preparatory phase with the HQ for ManCup racing installed and parking layouts underway.  The parking lot of the South Georgia Motorsports Park has been a beehive of activity since set up began in the early hours of Tuesday.

While Dave Schnitz and Jay Regan head up the administrative duties, Man Cup staff members have been setting up the headquarters and getting the lot ready for the hundreds of racers due in for the race, with first arrivals entering the pit gates, starting tomorrow morning on Wednesday for 5 days of motorcycle drag racing.

As the Man Cup staff kicks things off in the pits, the SGMP staff is hard at work on the track getting a world-class racing surface ready for the weekend.  A full on power-scrape of the track began today before noon, followed by the sweeping and scrubbing of the racing surface.