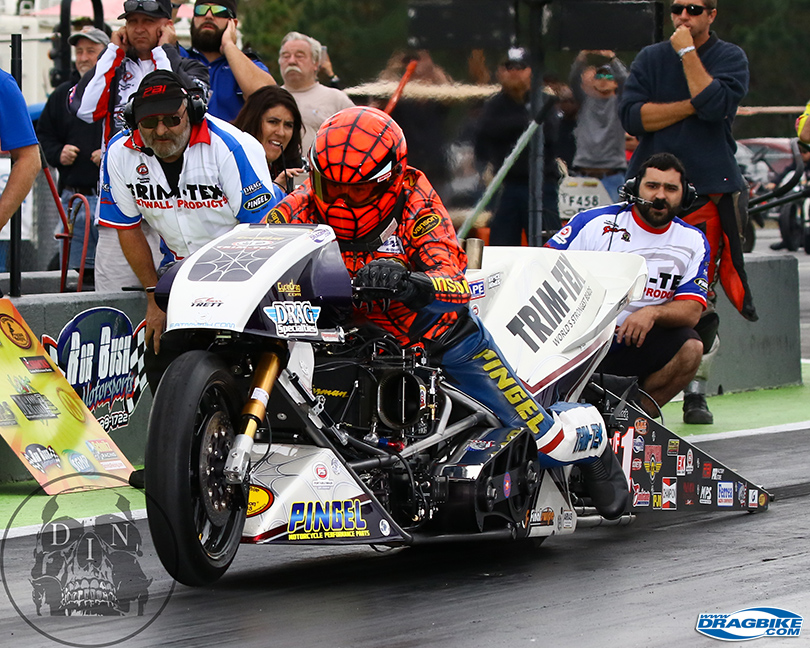 In the Pingel Top Fuel motorcycle drag racing series, Larry McBride has plans to once again go out and contend for his 18th Top Fuel Motorcycle #1 plate. “My goal for the year is to run hard, be consistent and to bring home that number one again by the end of the season” says the Spider Man from Virginia. His shop, Cycle Specialist, in Newport News VA is a busy place with his latest Top Fuel motorcycle being freshened up and the reconstruction of his old bike “Blue,” well under way. Larry and his team will have their hands full to defend their 2016 championship title.

Ian King, the ten-time FIM European Top Fuel motorcycle champion hopes to secure funding to race all five Man Cup events in 2017. Ian is a championship contender that will add another level of excitement for the fans of Top Fuel. While Ian is looking forward to the competition, he is more focused on the comradery of the Top Fuel class and being part of its growth. Larry’s thoughts on Ian coming to the USA “I think it’s a good deal. That will make us work even harder.” If Ian can bring home a championship this year with Man Cup, he will be the first European to do so since the late Brian Johnson accomplished the task in 1984. 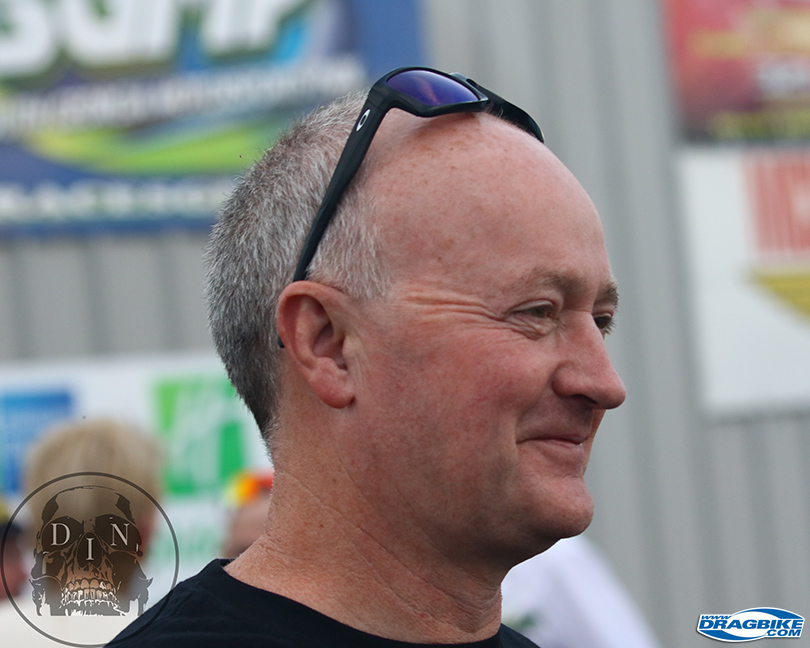 New to the class, Mitch Brown, will be driving for Dennis Bradley, and will enter 2017 as his first full year of competition on an I-4 Top Fuel motorcycle. He’s driven just about every other class of professional drag bike, so Mitch is no stranger to high horsepower. During test runs at the Man Cup, Mann Hill Garage World Finals in 2016, Mitch looked completely at home on Bradley’s new Top Fuel bike. The bike was created by Sam Wills and big things are expected from this team.

And speaking of the Nitro Conspiracy team, Sam Wills and Mike Dryden will be in attendance for the first race of the 2017 season, but how much they will run in competition this year is dependent on finding additional funding to race with. Sam and Mike are looking forward to helping Dennis Bradley’s team come together and the same can be said for their efforts in helping the new David Ledniky, Houston Motorsports Racing team.

Terry Kizer, who is no stranger to Top Fuel bike racing, will be driving for the Houston Motorsports Racing team. Terry is best known from his legendary Funny Bike racing days with the Orient Express team back when he and Mo Parsons were THE team to contend with in Funnybike racing. Terry has raced in Top Fuel before and he’s damn happy to be returning to motorcycle Top Fuel drag racing.

In the world of Top Fuel Twin racing, Jay Turner and his JTR (Jay Turner Racing) team are the ones to watch first and foremost. After winning both the NHRA and the last IHRA championship in 2016, Jay Turner is hands down the baddest of the bad in Nitro Harley racing. Jay is building himself a new Top Fuel bike for 2017 and he also has new monsters under construction in his shop for Tii Tharpe and Tracy Kile. Mike Scott and Randal Andras are also looking forward to 2017 racing action. 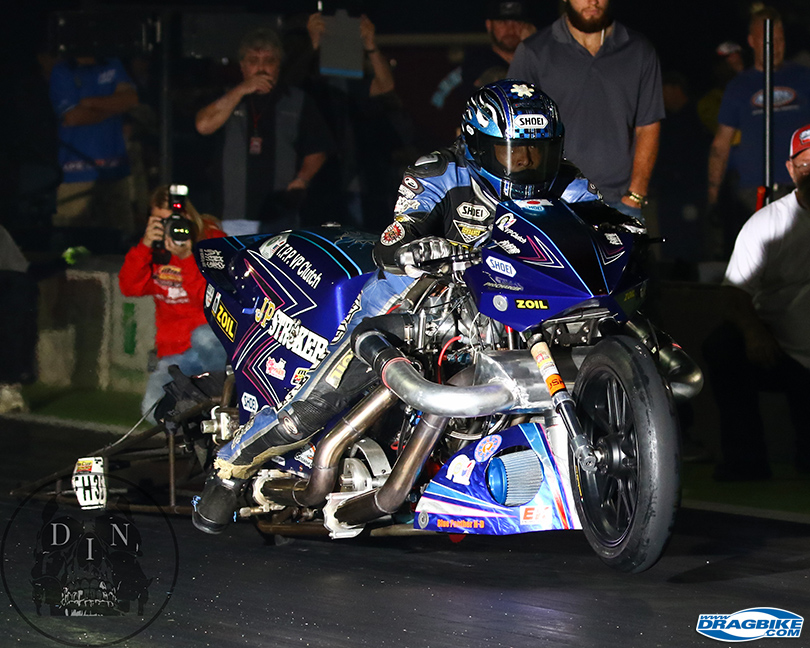 Top Fuel Harley new guy Jim Page, racing with Don Johnson (DJ) will be a man to keep an eye on in 2017. 50 Year old Jim Page of Winter Park, FL., made a great impression his first outing in Top Fuel Harley by driving DJ’s Nitro Harley to a stellar 6.66 @ 210 MPH with his first pass on the motorcycle! DJ had enough faith in him to enter the Top Fuel Harley class at the 2016 Man Cup Mann Hill Garage World Finals for Jim’s first race in competition.

Jim started out riding motorcycles in 1970’s and began riding a RD400 street bike in 1975. He got into motorcycle drag racing in 1980. He began in the ET class. Jim raced sportsman class bikes from 1980to 1985 when he started racing in the professional ranks on a Top Gas/MPS built nitrous Suzuki bike with a best ET & MPH that year of 770’s at 168. 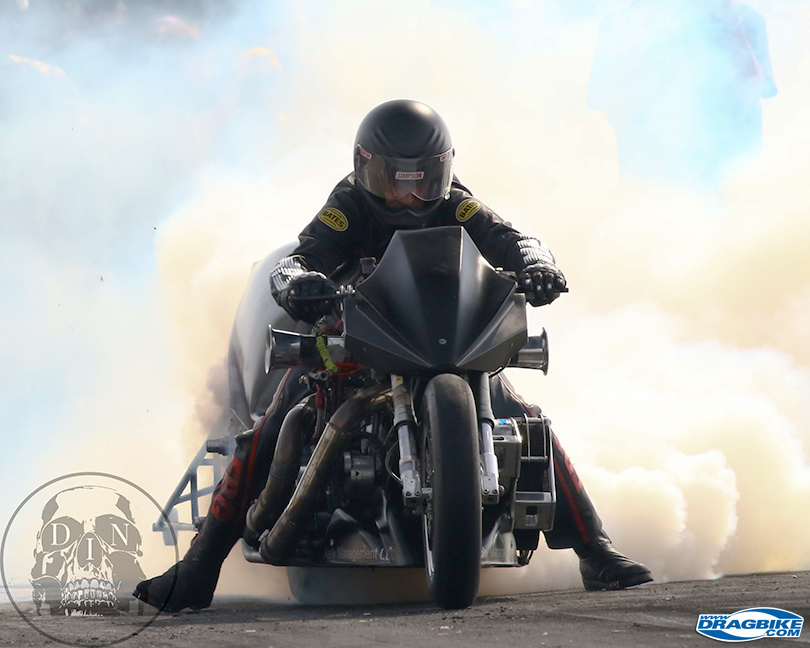 Prior to his debut in November of 2016 on DJ’s Top Fuel Harley, Jim had a previous quickest ET of 728 and his fastest MPH prior to his Top Fuel Harley debut was a 182 MPH pass on his Pro-Stock bike. Jim had this to say about his first time racing a Nitro Harley, “Loved every second. Felt like I was born to do it.”Jim and DJ for 2017 have plans to race as many events as possible for 2017 and plan on contending for a Top Fuel championship with the NHRA sanction. 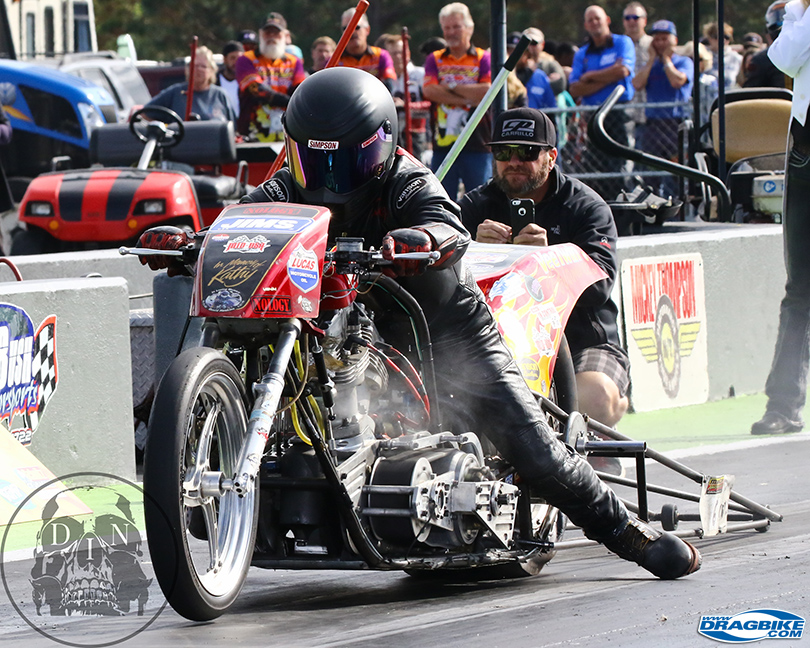 Mike Beland will also be out racing in 2017 with Carl Pelletier; they have a two race deal and will be hitting the NHRA Mellow Yellow series starting with the season opener in Pomona, CA. Frank Capone is also ready to rumble this season.
In Hawaya Racing Pro Fuel for 2017, Tyler Wilson, who unseated Rocky Jackson as the Man Cup Pro Fuel champion, will have his hands full in holding off Michael Ray who will be out with blood in his eyes from race one of the 2017 season. Michael Ray will be driving Johnny Vickers “Terminator” Pro Fuel bike and with Johnny tuning, and Michael driving, everyone is in trouble. This is not to say Kirby Apathy, or Rocky Jackson or Janette Thornley can’t upset the apple cart, they sure can, but they’ll have to go through Tyler or Ray to steal the show. Hawaya Racing Pro Fuel class in 2017 will be a real Nitro-Brawl! 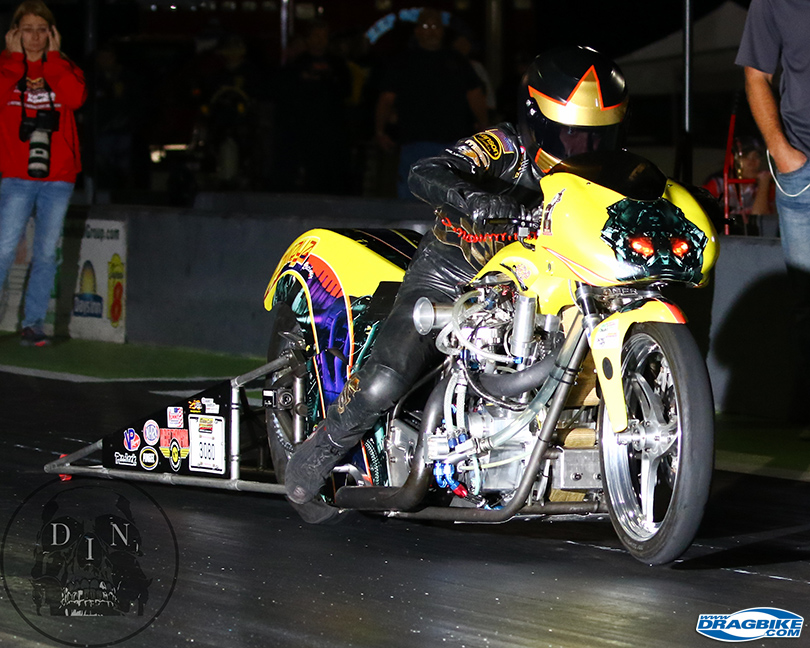 And if you’re wondering now that Johnny’s bike is for sale/rent, what’s he up to next? Yes, you guessed it, his next creation is in the works and yes he’s taking it to the next level! 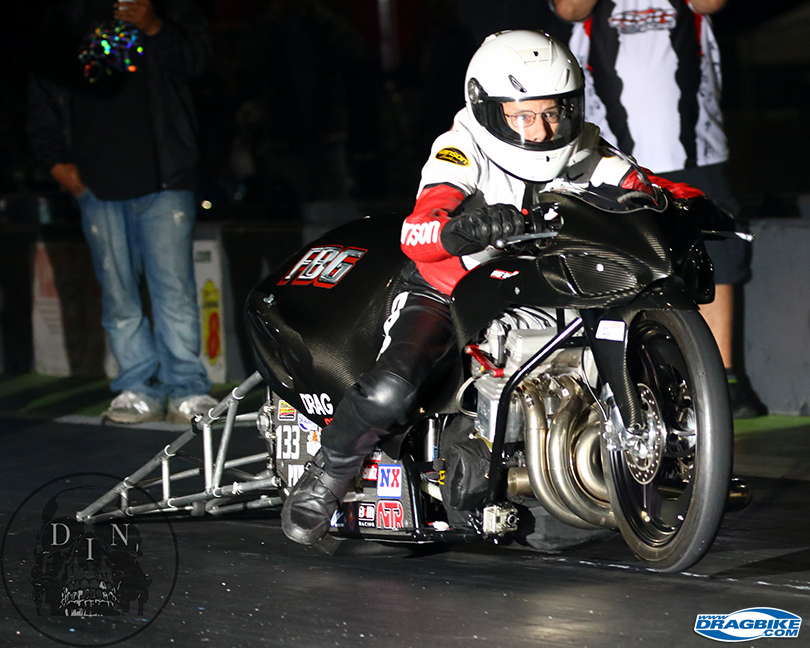 In the Falicon Performance Pro Mod series, there is so much talent, so capable of winning races it’s a delight to watch the class every race. There is NO Way to predict an outcome in advance. Paul Gast clinched the 2016 championship for Pro Mod, but he did so with Travis Davis just a few points behind and Brunson Grothus right behind him. Knowing Eric McKinney, Ashley Owens, and the Prophit(s) are in the mix, expect the methods of mayhem to be the norm. BUT, keep an eye on Jeff House and Shane Eperjesi to sneak into the top five in 2017. Fate and hard work will determine how far up the ladder they go. 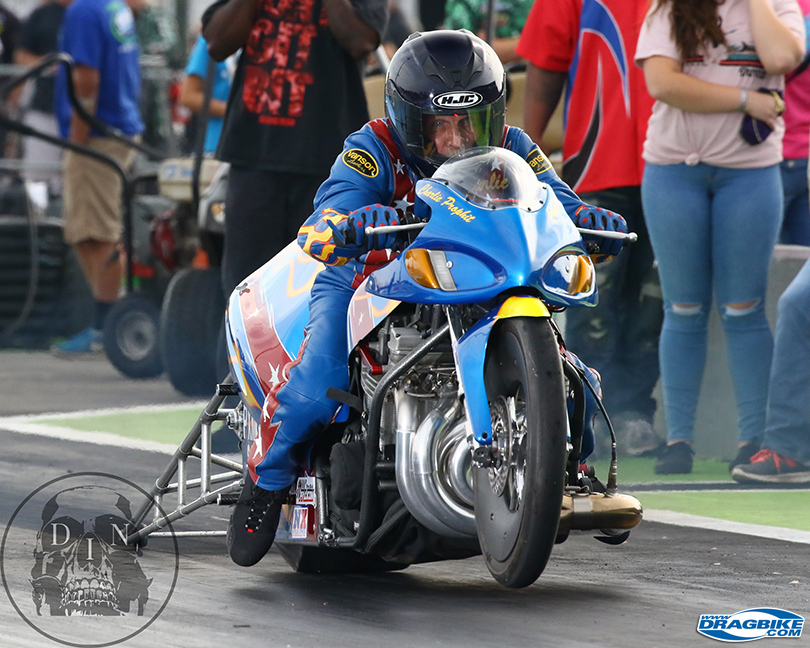 Nitrous Express Pro Open class racing has been the domain of Mark Rendeluk for a few seasons now, watch for 2017 to be the year he has his first real challenge to his throne. Rob Giard was the first to win a P/O championship and he’s been a while now setting up new digs and when he’s done he IS returning to Pro Open competition. Mark’s understudy in 2016, Miss Niki Zakrzewski, finished national #2 in points to Mark and she has big plans for her developing race team in 2017. 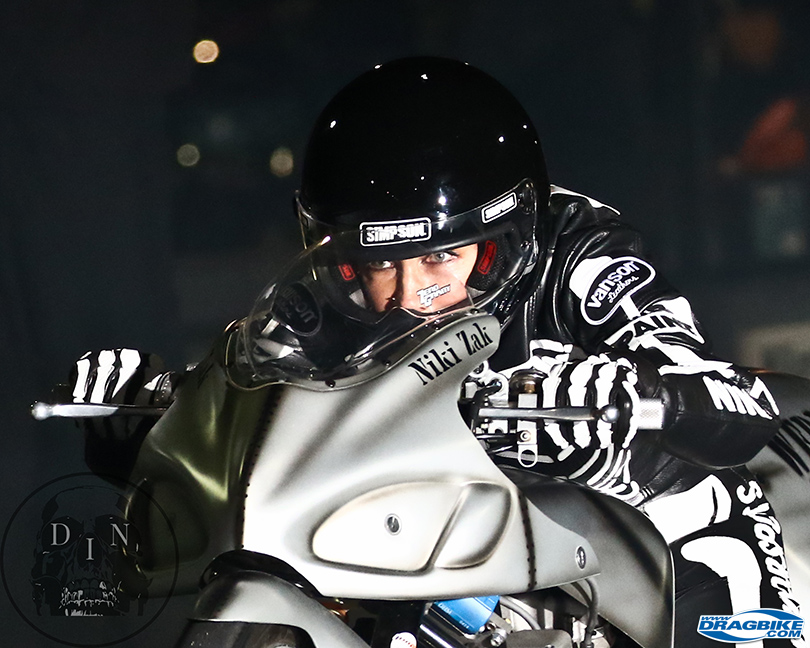 “I had a huge race season in 2016 with a lot of travel from across the pond. I raced at PDRA events, Man Cup, Texas, Rockingham, Memphis, Valdosta, Tulsa; it was not easy to just step off a plane and go racing but we did it! I can’t thank Mark Rendeluk, Chris Wedman, and their families enough for their support throughout the 2016 season.

In 2017, with my own home coming into light in the USA, this will ease up on the travel a bit and allow me to focus more on racing. Having my own home, kitchen, garden and fur-babies will make it all so much more enjoyable. I will still race on both shores of course, one bike in the USA and the other based in my home of Sydney, Australia. The former “Cooper Performance blue bike” I now call “Quick” is on its way to Sydney and the silver “Pony” I raced in 2016, will stay in the USA. In 2017, you’ll see me on both bikes. I’m blessed to own and race two Timblin chassis bikes!” 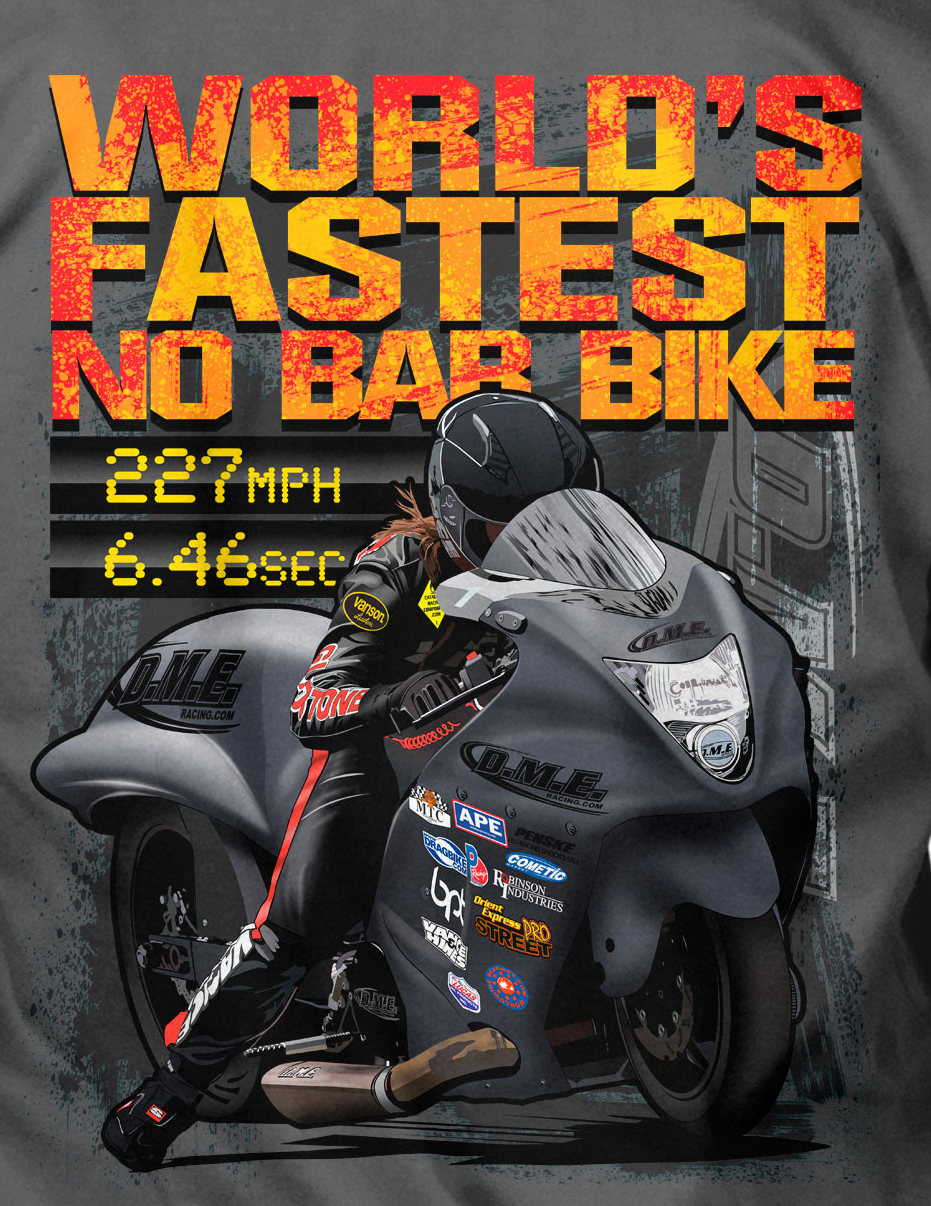 Tony Steel of Massachusetts has put the word out he’s racing in Pro Open for 2017 for much of the season. He’s short on funds for the first race, but says he will be at the remaining 4 events. That’s not likely to give him a shot at Mr. Paint, but Tony’s bike has already clocked 6.50’s @ over 210mph, so his bike has what it takes to contend.

I also have word  that the dreaded DME Racing “Tink Tink” Pro Open bike will be out in 2017 again. The team is just looking for a good reason to unleash it’s potential and show the world what an unlimited no-bars bike can do. Fear this bike.

In the APE sponsored Pro Street class, while it’s a give you never take your eye of Joey Gladstone, keep an eye out for the black motorcycles with the W prominently displayed on them. They have not told me as much but my hunch is they are going DME hunting in 2017 with no bag limit. This class will be monster this season. Any one of the top ten point’s racers from 2016 can contend with gusto for the championship. More importantly, it will be a tight slug fest, race by race for the championship. Whomsoever wins the 2017 APE Pro Street championship, I’ll tell you this: the winner will earn it 100%! 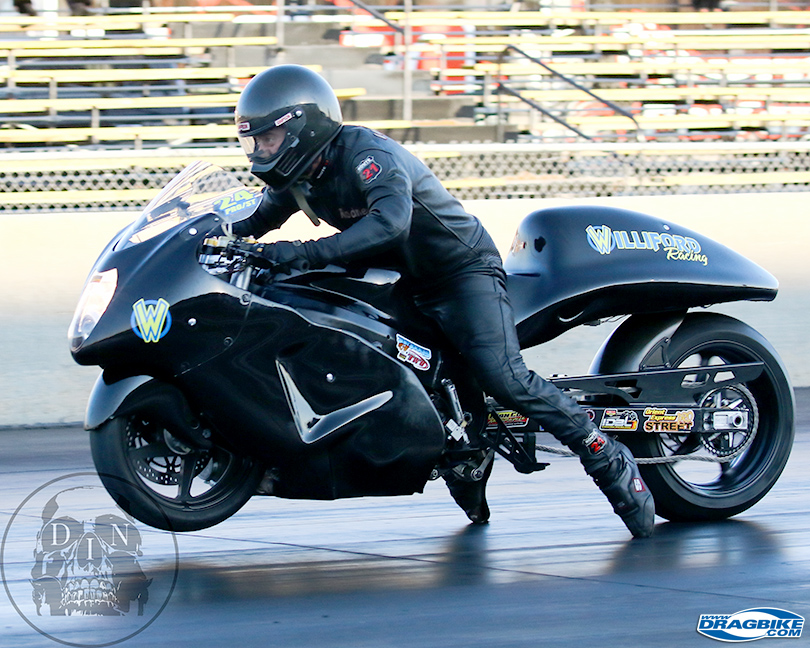 Aside from Williford Racing being the ones to watch, keep an eye out for Mark Paquette, Bud Yoder, Chris Connelly, Quicktime Motorsports, Michael Bayes, and Jeremy Teasley on a new ride in 2017. There are many in Man Cup Pro Street, and they are powerful! 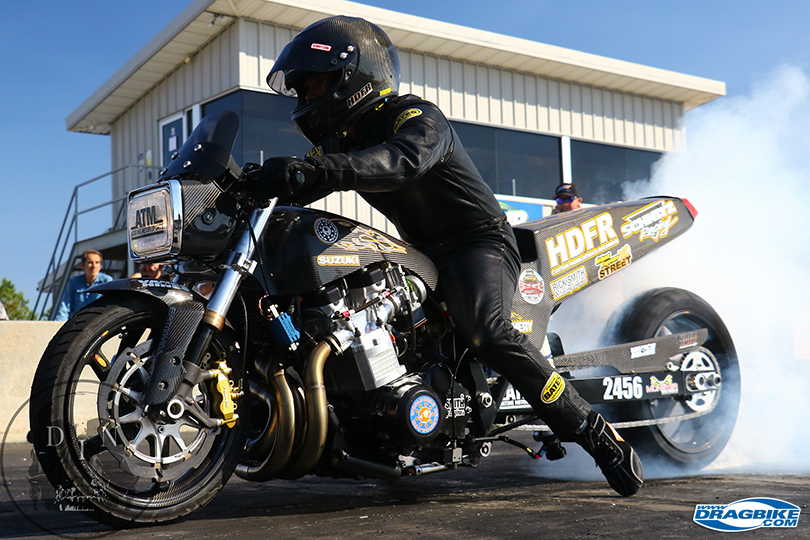 Shinko/WPS – Real Street racing in 2017 should be a great year once again for a great class. While Joey Gladstone and team DME took the #1 plate in 2016, for the new season, there is no doubt that top contenders from last year will make defending the title difficult for team DME. 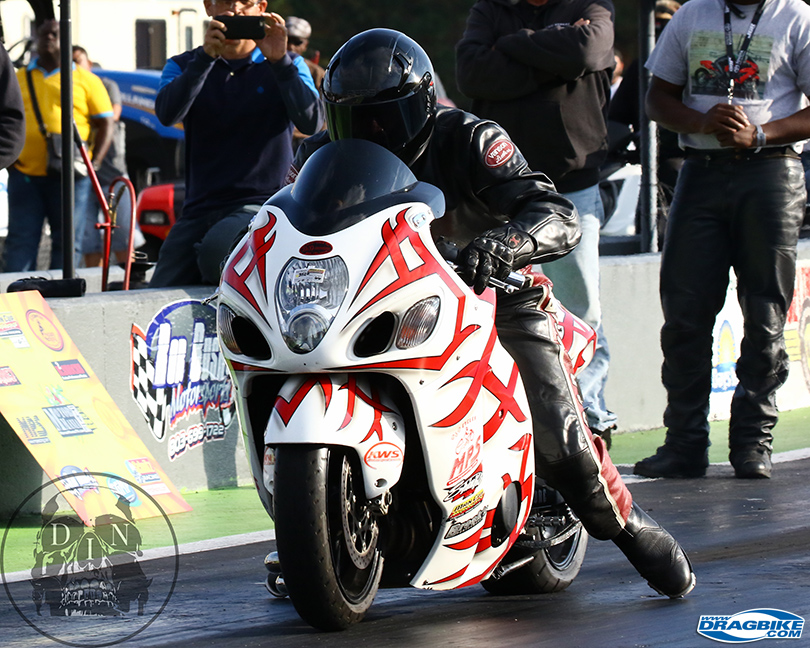 Jason Herron and Anibal Merced are both quite capable of winning races as they have in the past, they can race to the front of the class in short order. Once out front either would be very difficult to stop. Luis Hornedo and Johnny Dobrin are also valid contenders as well. Eddie Chapman, Jamie Lopes, Ricky Gadson; tons of talent abound. In 2017, these are the ones to watch! 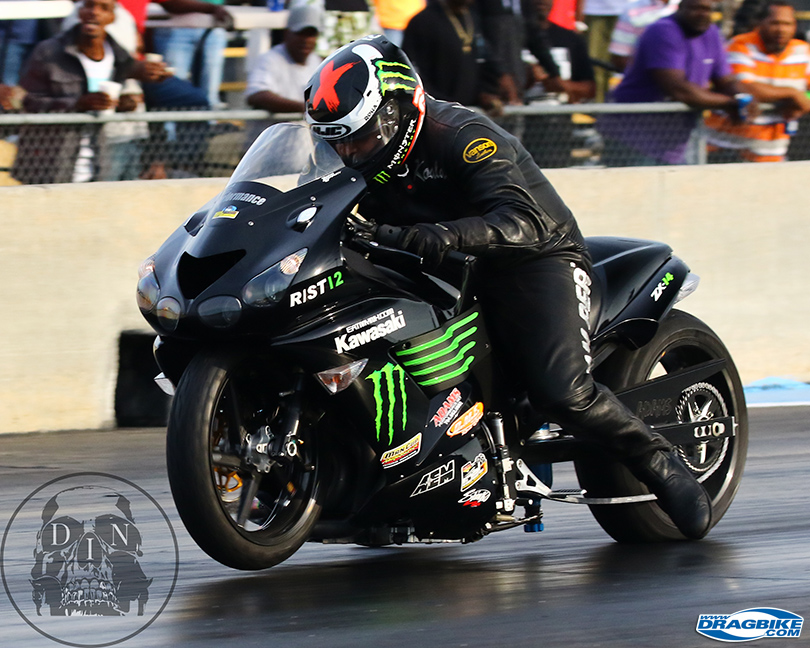