This is a true World Class Event with racers from, Finland, New Zealand, Sweden, Japan, South Africa, Denmark, and all over the USA. Somewhere between 700 to 800 contestants are expected to compete over the course of the five days of racing. Click Here to read the full Pre-Race Report.

Visit our Facebook page to stay up-to-date all weekend long at Facebook.com/Dragbikecom

LIVE FEED STARTS FRIDAY AT 5PM – CHECK BACK FOR FEED 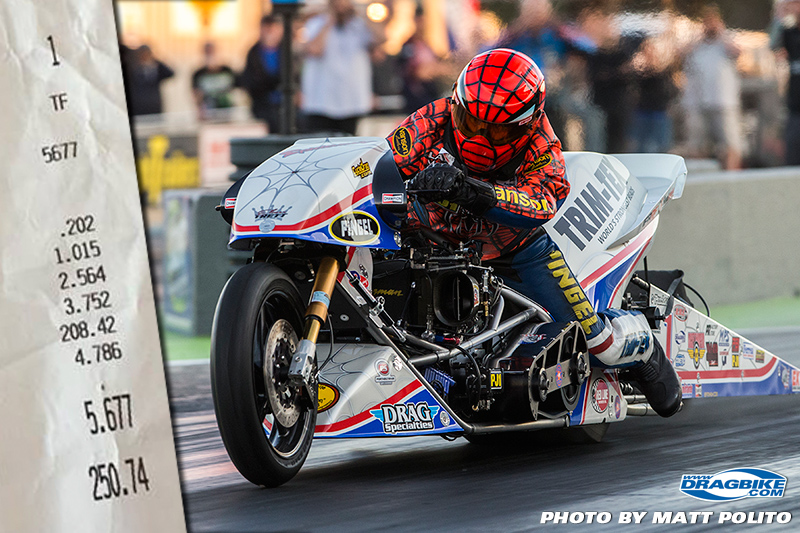 The DME All Star Shootout, for the second year in a row, kicked off on Thursday as part of the 41st Annual Man Cup Mann Hill Garage World Finals. The race-within-a-race, which pits the best in Pro Street bike competition head-to-head for $10,000 cash is popular with the baddest Pro Street bike racers, and they showed up in force for qualifying on day one of this five day event.

It was a fast paced very tough day of racing for the P/St bikes, they were allowed one test hit between 11AM and 12 Noon, with the caveat that Q-1 was looming in the 12 O’clock hour. Because there were a few racers who rolled in late to the pits, Man Cup slid the schedule a bit, to allow them time to get ready. Qualifying began just after 12:30 and lanes 2 and 3 were full of Pro Street bikes.

After round one of qualifying, because it kicked off a tad late, this made the call for Q-2 come up quicker and the pressure was on for everyone. This furious pace was necessary to fit in two rounds of qualifying and two rounds of eliminations, between 12:30PM and 5:30 PM. That’s right, four rounds of Pro racing in five hours. It was fast paced and the competition was furious.

With two rounds of qualifying completed, the man to beat emerged as Mark Paquette, of Howell MI. His 6.74 elapsed time was just a tick better than Jeremey Teasley’s 6.77 and Ehren Litten’s 6.79 time slip. These numbers are the best indication of how tight the racing would be for this prestigious event. 30 Pro Street motorcycles, the world’s quickest and meanest, showed up to feed, and eat the weak they did.

Round two of eliminations kicked off, under the lights at SGMP and the lighting system at South Georgia Motorsports Park is just delightful. The entire track, including the shutdown area is well lit, making it a real joy for the fans, as well as safer for the racers.

Mark Paquette led off the round with a bye run, stopping the timers at 6.92 seconds. Then Justin Shakir took out Chris Connelly, (7.01 Vs 7.02), Rodney Williford stormed to victory over Steve Venables (6.73 Vs 10.64), Dave Roisen over Jake Henderson (7.29 Vs 7.41), Jeremy Teasley over Mike Kovacevich (6.94 Vs 7.38), Gabe Fredrick defeated Brandon Mitchan (6.97 Vs 7.03), Ehren Litten eliminated Rudy Sanzottera (6.88 Vs 7.05) and Bud Yoder posted a 6.81 while Jason Angela broke. This action pares down the competition filed to the elite-eight, Paquette-Shakir, Williford-Roisen, Teasley-Fredrick, and Litten-Yoder; who are all headed for E-3, during Friday’s racing.

In other news, various professional teams and sportsman racers made a few test passes in between the fast paced DME All Star Shootout. Here’s a photo gallery of the day’s action. Please note that while the teams are testing they prefer their actual performance numbers not be posted. After all, they are trying out new combinations, searching for that next level of performance.

By 8am this morning the gates were open and racing rigs began rolling through the entryway of South Georgia Motorsports Park (SGMP), as the much awaited 41st Annual Man Cup Mann Hill Garage World Finals begins. Racers from all over the world are already on the property going through the motions of getting ready for the race weekend.

Racer Registration is open and tech will soon follow. The racers are unloading their gear, setting up this morning, the vibe is excellent. By 7:15AM, EST, this morning, the track surface equipment was out on the racing surface getting ready for this historic event.