The season-opening Man Cup event, the 37th Annual Exoticycle Spring Cup, presented by Roaring Toyz will kick off the motorcycle drag racing season on April 6-8, 2018, in Adel, Georgia, at South Georgia Motorsports Park. The fifteen classes of Man Cup motorcycle drag racing will take to the track for qualifying on Friday and Saturday, with eliminations starting on Sunday for Pro classes.

The official hotels for this event will be both the Comfort Inn & Suites and also the Super 8, located off Exit 16, just off I-75 near Valdosta, GA. Please call ahead for reservations and be sure to mention the Man Cup event to take advantage of the group rate discounts.

On Wednesday, April 4th, the pit gate will open from 12 noon to 7PM for vendors and early bird racers. Anyone arriving after 7PM will be directed to stage outside the North Gate. Thursday, April 5th, the pit gate will open at 10AM and close at 8PM. There will be Man Cup operated open test & tune from 12 noon, until 7PM. Racers arriving for this, be sure to check in with Registration and Tech after entry to the pits. 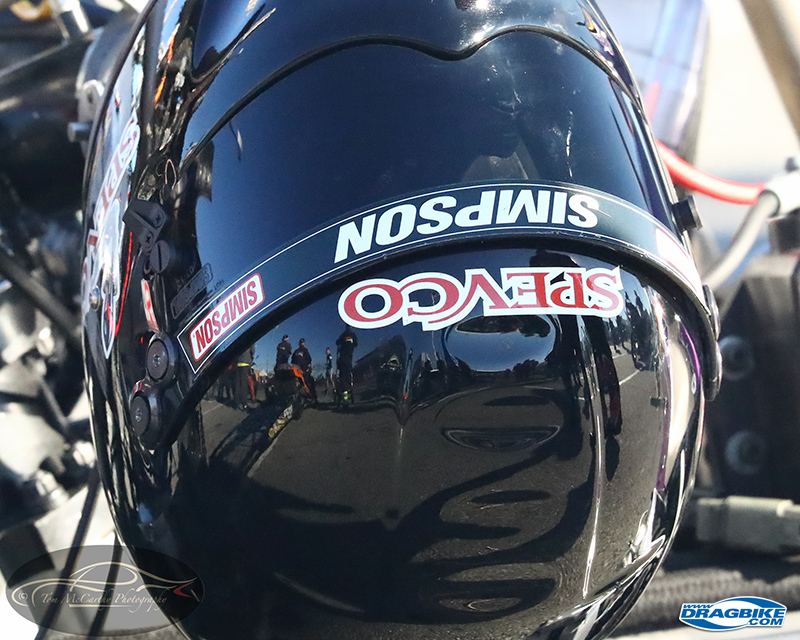 Friday,  Test-n-Tune will be available to racers from 9AM to 3:30PM. Pro qualifying will begin promptly at 5PM, with Sportsman qualifying round 1 to follow. Both Q-1 and Q-2 for all sportsman classes will be run Friday night. Racers need to be alert to announcements as run times and actual run order under racing conditions may vary as needed. It is imperative that racing on Friday be concluded not later than 10:55 PM and the gates will only be open to racers with arm-bands after 11:30PM.

Saturday racing will begin at 9AM with the first and second rounds of eliminations for Street ET, Pro ET and V-Twin which will happen from around 9AM to 11:15, when preparations for Pro qualifying will commence. Q-2 for the professional classes will begin at 12 Noon, and run again at 4PM, followed by sportsman racing. On Saturday night, first round of eliminations will happen in all sportsman classes. There will be a Grudge Fest at 9PM and no matter the number of entries, racing will conclude by 10:55PM, Saturday night.

Sunday racing will follow the usual format with racing beginning at 9AM for ET classes and Pingel Top Fuel will be leading off the big show at just after 11:30AM. The professional classes are scheduled for final rounds to be run at 6PM and it’s important to note that the Man Cup sanction is committed to running it’s events in a timely fashion for the benefit of the racers and their families who have to get up and go to work on Monday. So adherence to the racing schedule will be vigorously enforced all weekend.

In the Pingel Top Fuel series, the quickest and fastest man on two wheels, Mister Larry ‘Spiderman’ McBride will be out to defend his #1 plate against all comers and the rest of the motorcycle drag racing world will be out to play catch-up in his wake. 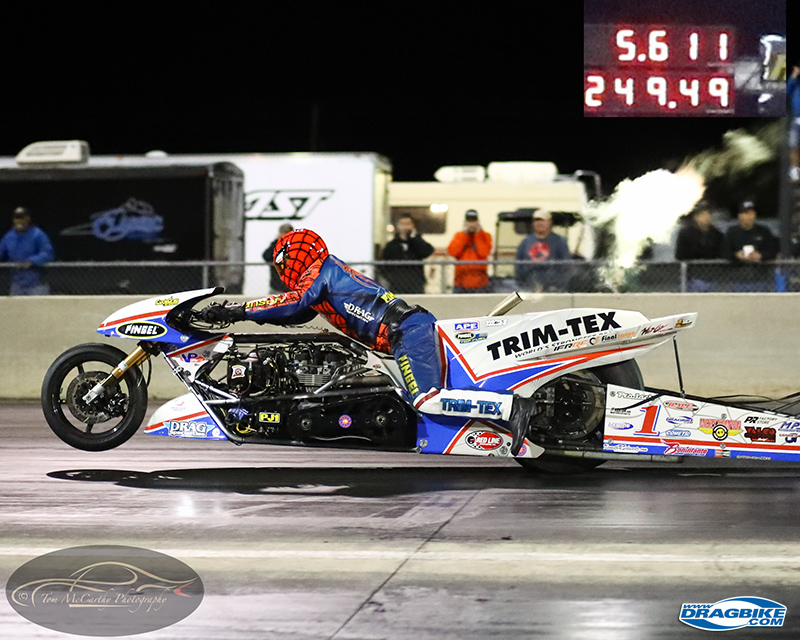 His jaw-dropping 5.61 elapsed time and booming 258 MPH passes that he unleashed in November of 2017 are still numbers being talked about around the globe. Can anyone catch the Spiderman? We will all be watching in 2018 to find out. 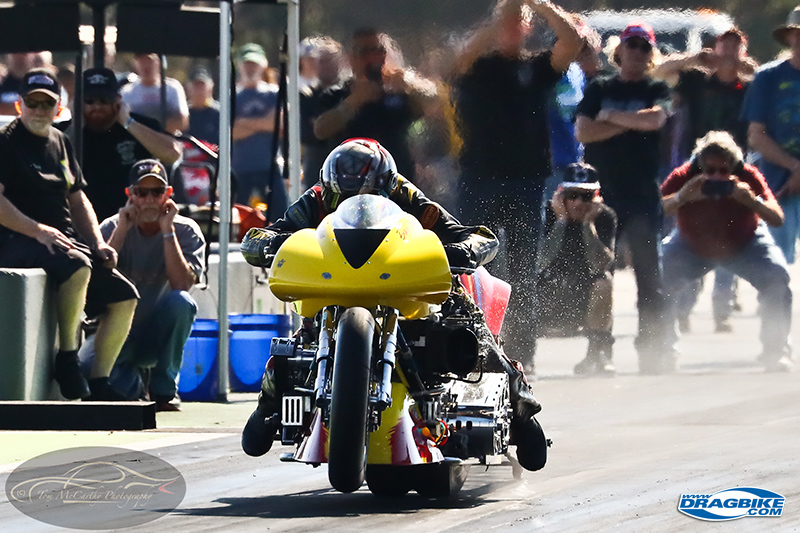 The Orangeburg Cycle Racing Pro Fuel series will kick off at this race with Preston Bartlett sporting his spanking new #1 plate and he has announce he is out to defend his title and will be at all five Man Cup events this season. The OCR Pro Fuel class is hoping to see its numbers increase this season in the participation department. With over thirty Pro Fuel bikes in garages spread out among the states, the Man Cup series offers some of the best racing on the fastest and quickest race tracks in the USA. 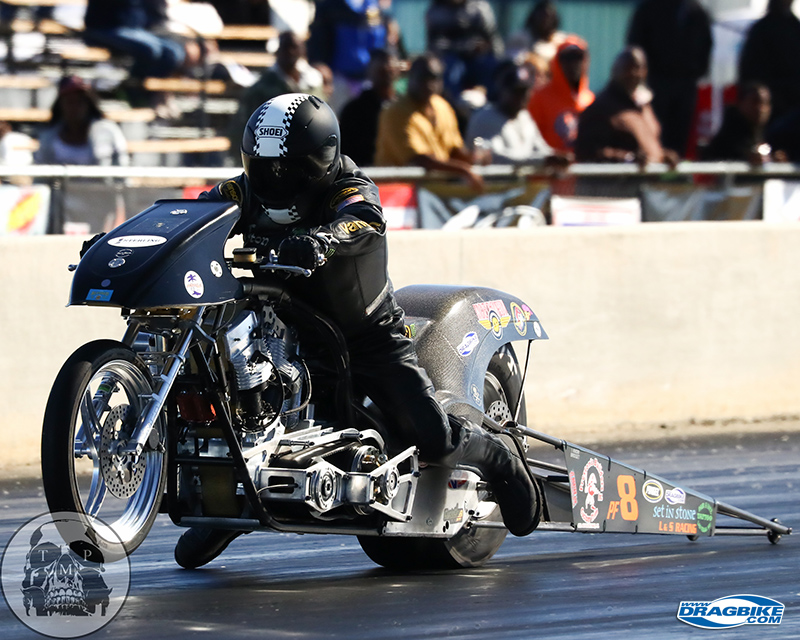 Falicon Pro Mod racing at the Spring Cup will see Brunson Grothus proudly flying his new #1 plate and the entire Grothus Drag Bikes team are eager to defend that hard earned plate. They finished 2017 just ahead of Bad Brad McCoy and there is no doubt in anyone’s mind that the championship for 2018 will be a dog-fight in Man Cup Pro Mod. The top five from last season, Brunson, Brad, Jeff House, Paul Gast and Travis Davis; are all capable of trading places at any time. The struggle for supremacy will not end until November, that’s for sure. 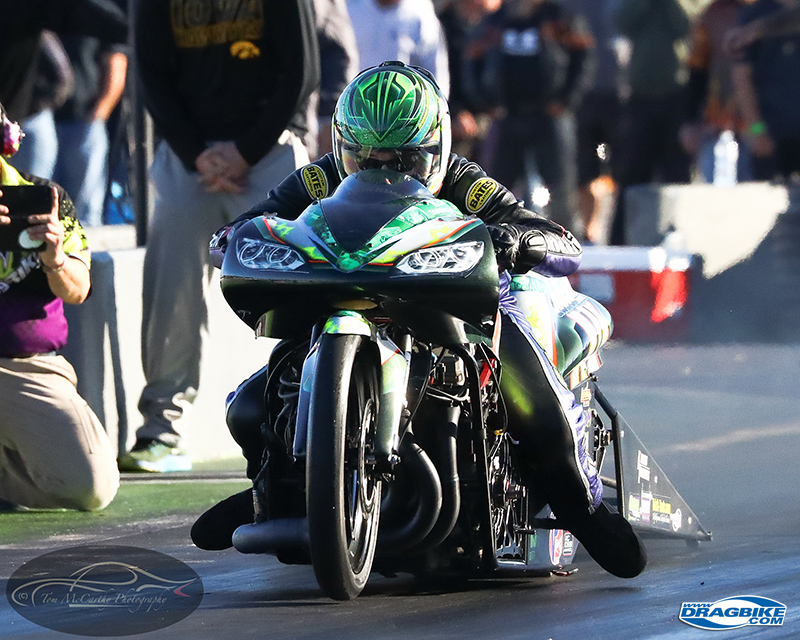 In Nitrous Express Pro Open class racing, the famous, or infamous if you prefer, Mr. Paint – Mark Rendeluk – will be out defending his #1 plate and loving it. After all, with three Man Cup championships to his credit, you’ll see more of Mark in 2018. But don’t be surprised if you see Brunson Grothus push HARD for the championship. He was national #2 in the class last year and Brunson will be punching tickets in multiple classes all season. 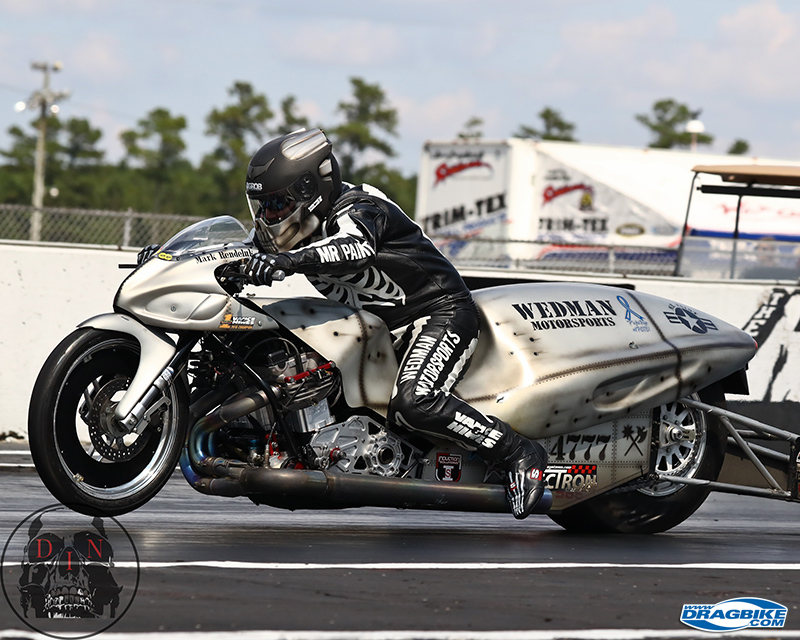 APE Pro Street class racing in 2018 will be better than ever! The talented Jeremy Teasley won the championship last year for his sponsor DME Racing and there is no doubt they will be back with a fury to defend it in 2018. The racers of the Pro Street class have a tremendous amount of talent, so over the five-race season, exactly who will be in points position come November is anyone’s guess. 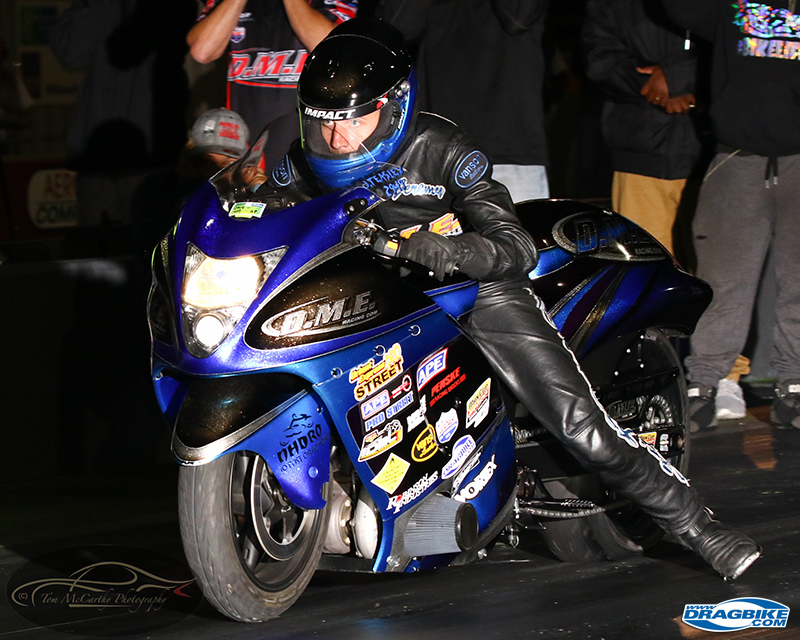 One thing we are assured of is race to race, handle bar to handle bar racing! Perhaps of greater interest is who can force their way into the top tier? Any of last year’s top-ten can do it, but who will? 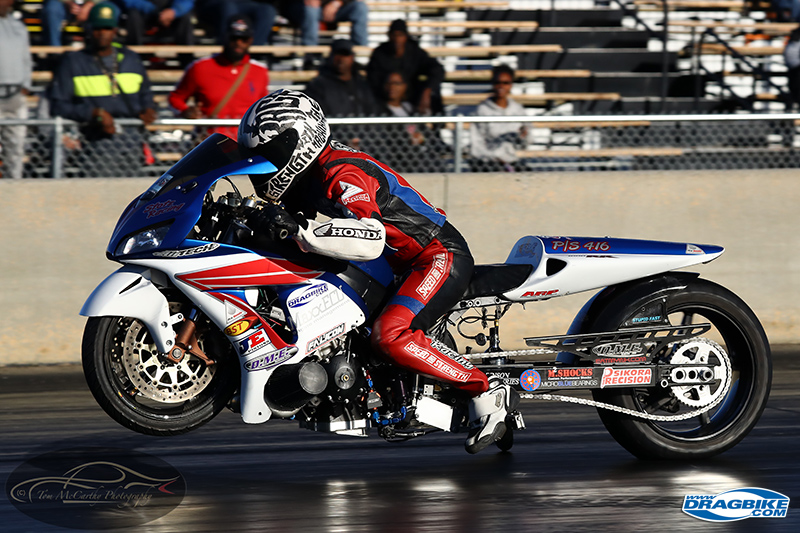 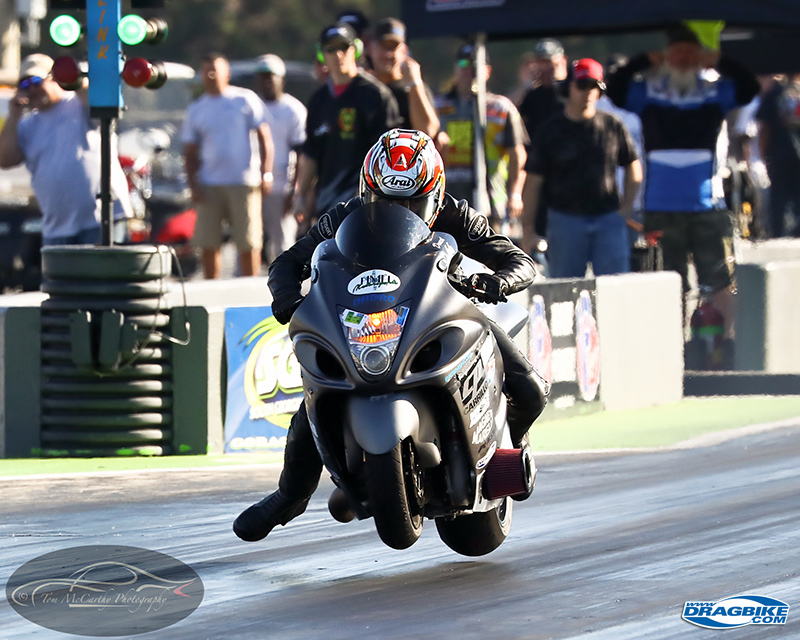 In Shinko/WPS Real Street last year, Johnny “Turbo” Dobrin whomped racers good  and he’s capable of doing it again. No one but Johnny knows what speed secrets he’s uncovered during the winter months, so the first race of the season will be an interesting one. With Marcus Hylton, Super Dave, Luis Hornedo, Spencer Claycomb, Anibal Merced, Jason Fernandez, Joey Gladstone, Jeremy St. Julian, Geno Scali rounding out the top-ten, the talent pool is there to push this class to new heights. 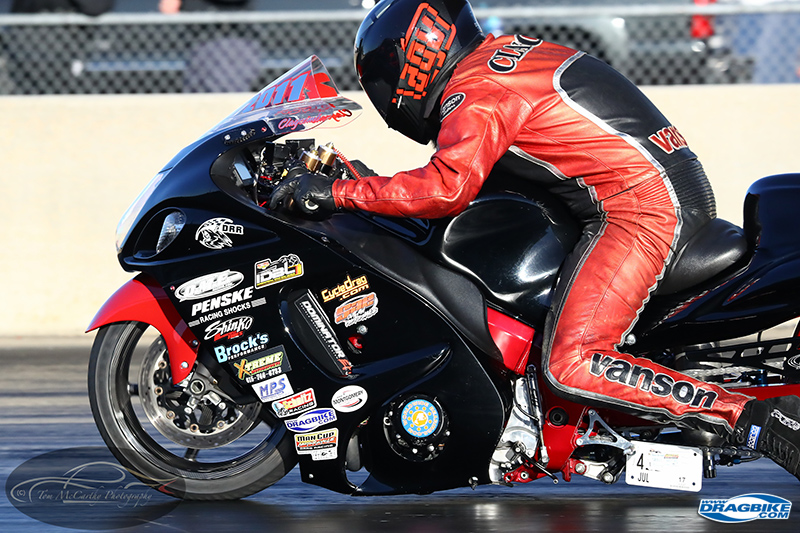 Sportsman racers in 2018 have one tough road ahead of them. The classes have some of the best of the best in sportsman racing ready to do battle all season long. Many of these racers are just a sponsorship away from turning pro, they are that good.

In Grothus Dragbike 4.60 class, the Mullen brothers, Tony and Jimmy will be defending their #1 plate against some of the biggest bad-ass sportsman racers on the planet. Brunson Grothus, Mike Chongris, Broderick Jackson, George Babor, Randal Cross, Ronnie Procopio, Jeff Jones, Mike Thyen, and Joe Rodney, comprise the ten heavy hitters from the class of 2017. Tony Mullen will need green lights and win lights to defend against these guys. 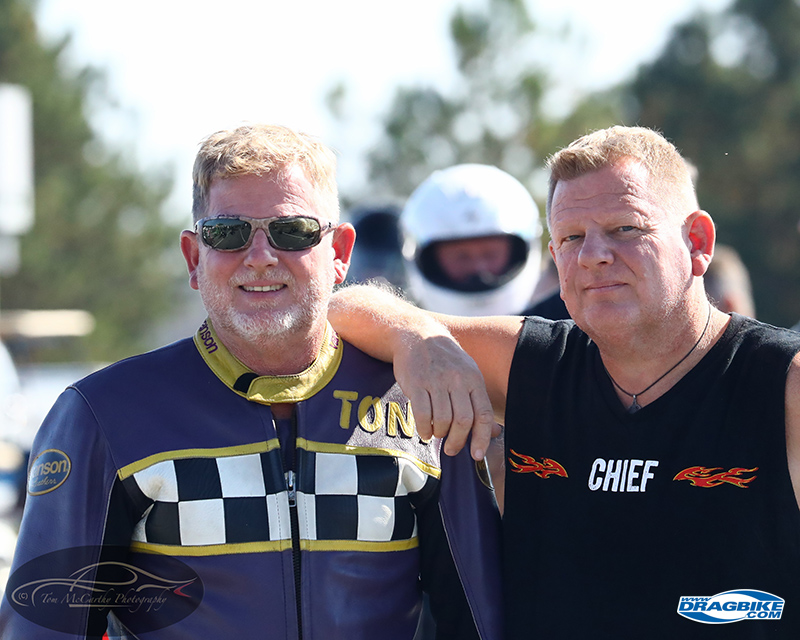 Star Racing Top Gas in 2018 will be a gas in more ways than one: fast action and top shelf competition. Pete Chongris took home the #1 plate in 2018 and he’ll have a tough time defending it against his top-ten contenders. 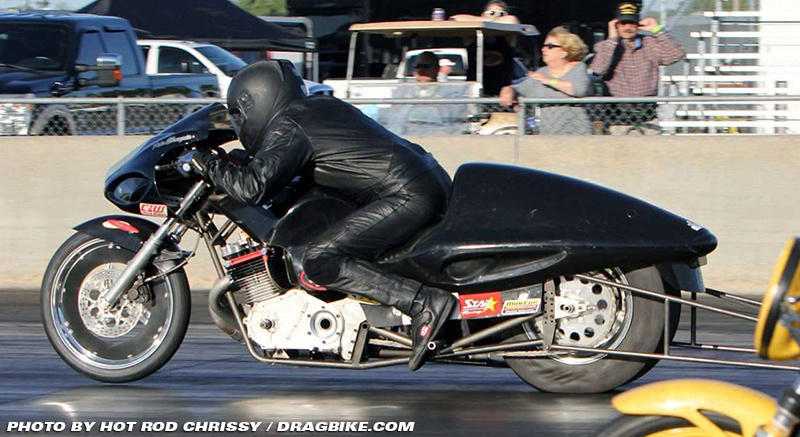 With racers like John Markham, Jim Chongris, Butch Million, Ricardo Marte, Alan Fields, Harvey Hubbard, George Jones and Frank Loney, all working to take over – Pete has his work cut out for him. 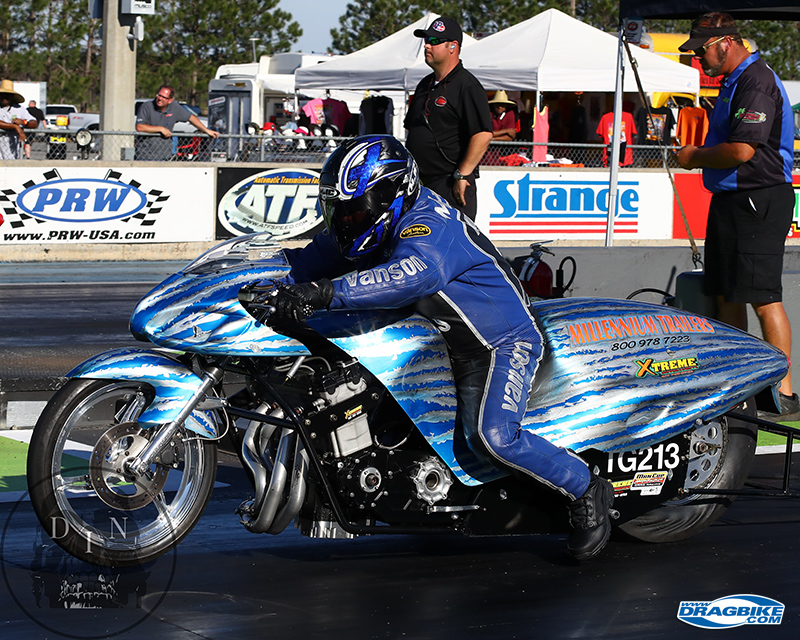 MTC Super Comp is in for a class leadership change in 2018 with #1 point man from last year, Dustin Lee, not racing in the super comp class. So the top spot in is already a wide-open affair. If you look at the next ten points racers from 2017, Dusty Brazel, Brody Grothus, Ronnie Johnson, Brian Dale, Spencer Claycomb, John Markham, Wade Smith, Randal Cross, Jeremy Teasley and Bryan Minor: this will be a tough battle that will take all five events to settle. 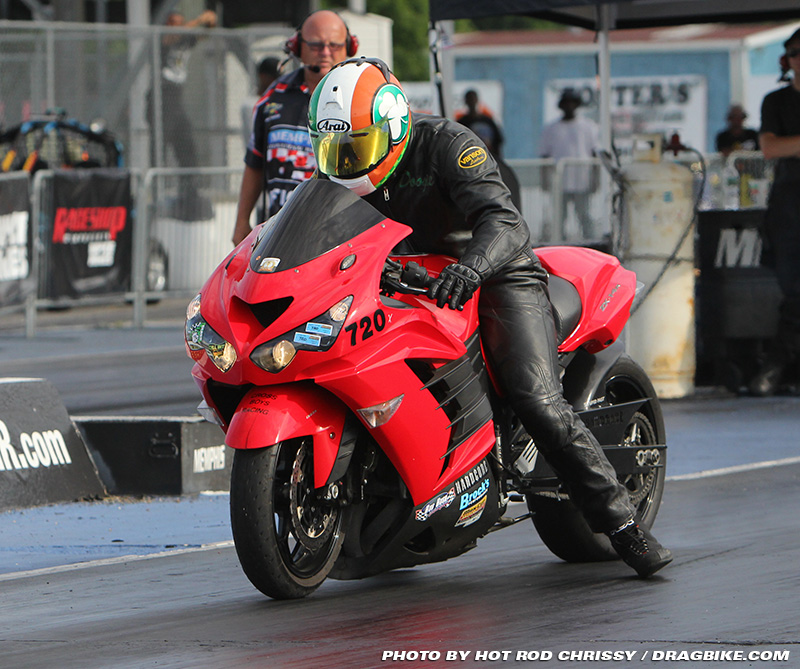 World Wide Bearings Crazy 8’s in 2018 will see if the man who won it all in 2017 can keep his #1 plate. Mr. Dusty Brazel, who worked YEARS for his first Man Cup #1 plate, well he will have to work his tale off and be damn good to keep it. Dusty finished 2017 just a few dozen points ahead of Wade Smith for his championship, but can he hold off, Brian Dale, Spencer Claycomb, Bryan Minor, Randal Cross, Ricardo Marte and Barry Prior Sr.? Crazy 8’s is going to produce some serious close racing this season and rest assured anyone who wins, man they earned it! 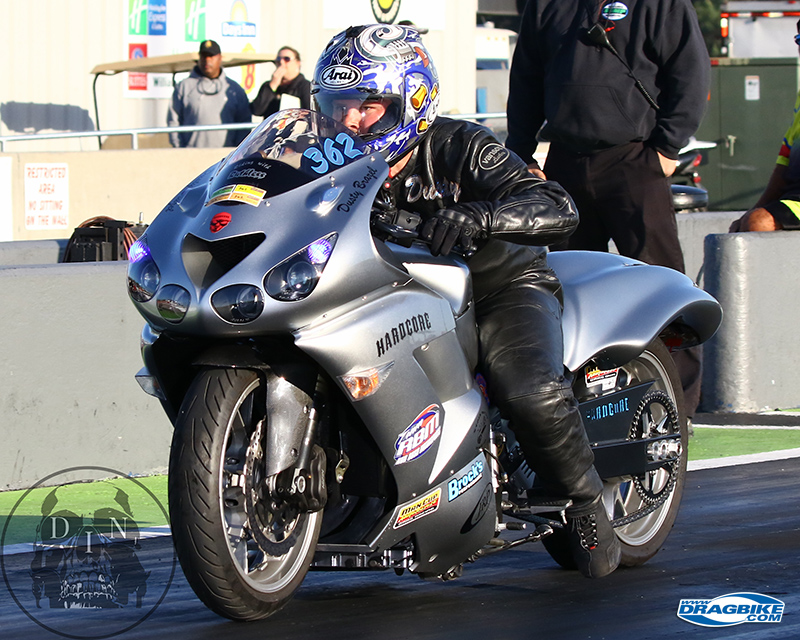 Wiseco Street Fighter 2018 – No bars, close racing every pass, here we go. Chris Roelse won the championship last year, can he repeat this season: maybe. There is a boat-load of motorcycles at every Man Cup event that can run the number in Street Fighter. There is also a like number of talented sportsman racers that can step into this class and win on any day. Anyone trying to bet on who will win the championship for Street Fighter prior to the start of the season would have to have deep pockets. It’s anyone’s race in this class, may good luck be with the racers who brave this mosh-pit. 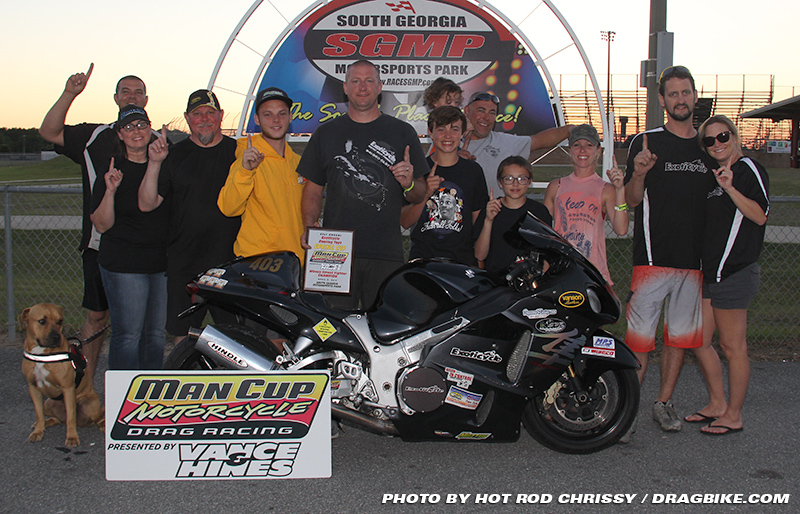 Vance & Hines V-Twin class racers will be happy to note, Vance Houdyshell, the toughest man to beat in Man Cup V-Twin Sportsman racing will be back in 2018 to again lead the way. This means they get another crack at trying to beat the best in the class – he’s one tough customer. Vance makes all the races, can race under any conditions and will travel the circuit to earn and keep his #1 plate. To be the best, it’s only fitting that one must race against the best and earn it. Anyone who races in the Vance & Hines V-Twin class, be prepared for the battle of your life for five straight races if you want to beat this man. 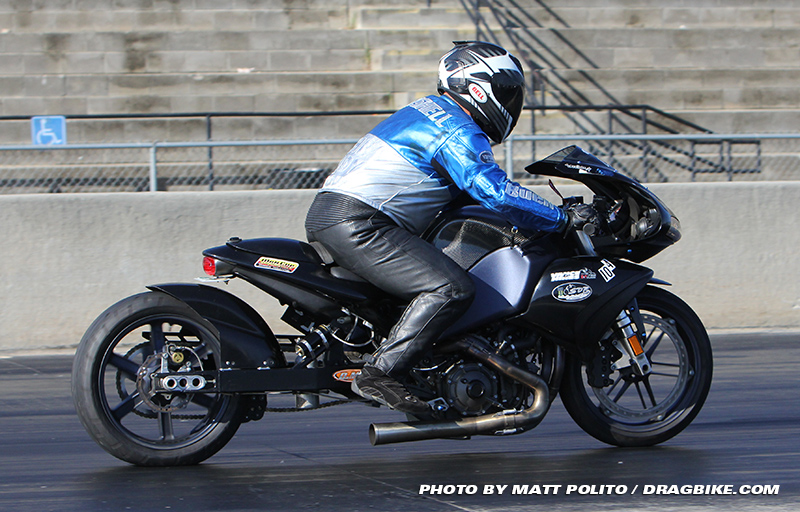 MPS Pro ET class racing, might just be the toughest fight of them all to win a championship in. This is the class with one of the highest numbers of entries and it will contain all the gunfighters who live and die by the tree and the stripe. These racers will push each other at both ends of the race track. They do everything possible to cut a light and will not lift unless it’s time. Ted Harvey III won the #1 plate in 2017. But he has to defend it against Steven Knight, John “Spooky” Markham, Jimmy Heisler, Spencer Claycomb, Harvey Hubbard, Calvin Mason, Rick Eaton, and Robin Procopio. So Ted Harvey III needs to hold off Team DRR and the Legion of Doom, to defend his plate. Good luck to all, keep it tight! 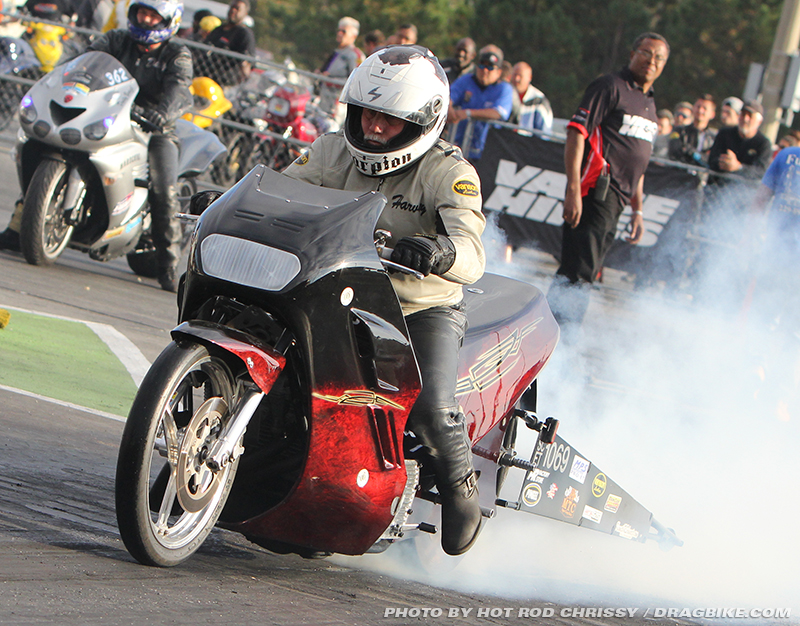 C&S Customs, Street ET class for 2018, welcome to the jungle! I love this class because everyone is equal and it does not take a million dollars to race the season. Any street bike, with proper safety features that meets Tech requirements, can compete equally in this class with any other bike and rider. 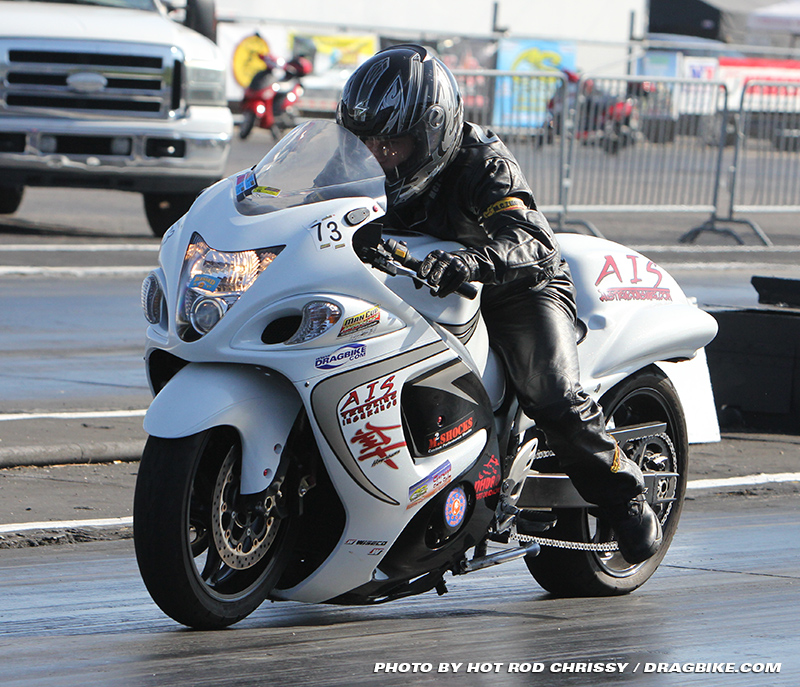 In 2017, Brian Dale is the tough guy who won the Man Cup points championship and has the coveted #1 plate going into the new season. The toughest thing about racing in C&S Street ET is going 6 to 8 rounds every race and running that number, tight as can be. This is not golf and there are no Mulligans handed out. Be ready or be gone! 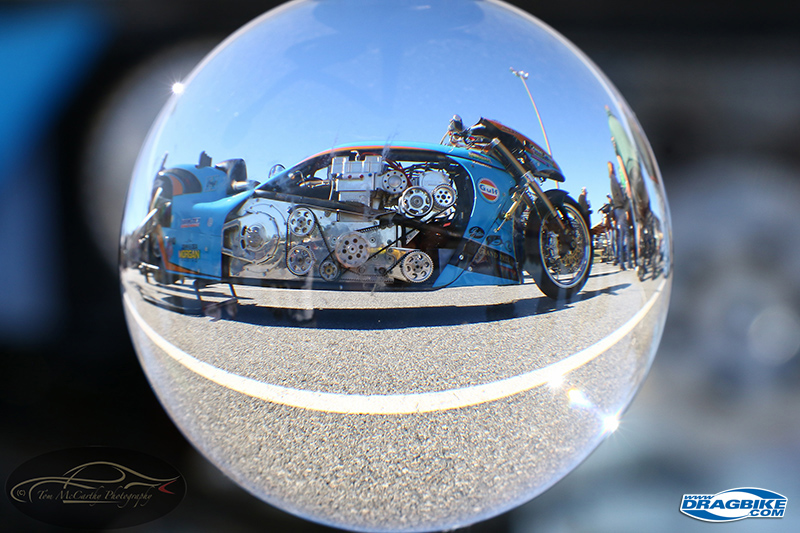