Battle of the Top Fuel Titans

The Final round of the Man Cup motorcycle drag racing series, presented by Vance and Hines will commence on November 20th at South Georgia Motorsports Park with the 43rd Annual FuelTech World Finals. Click Here for the weekend schedule.

The headlining class of Pingel Top Fuel will be a true Battle of Top Fuel Titans. The world’s only two 5.60’s Top Fuel motorcycles of Larry ‘Spiderman’ McBride (5.607 at 263.10 mph) and the Gulf Oil Top Fuel bike ridden by Ian King (5.662 at 246.74 mph) will begin qualifying Friday evening as they do battle for International supremacy. 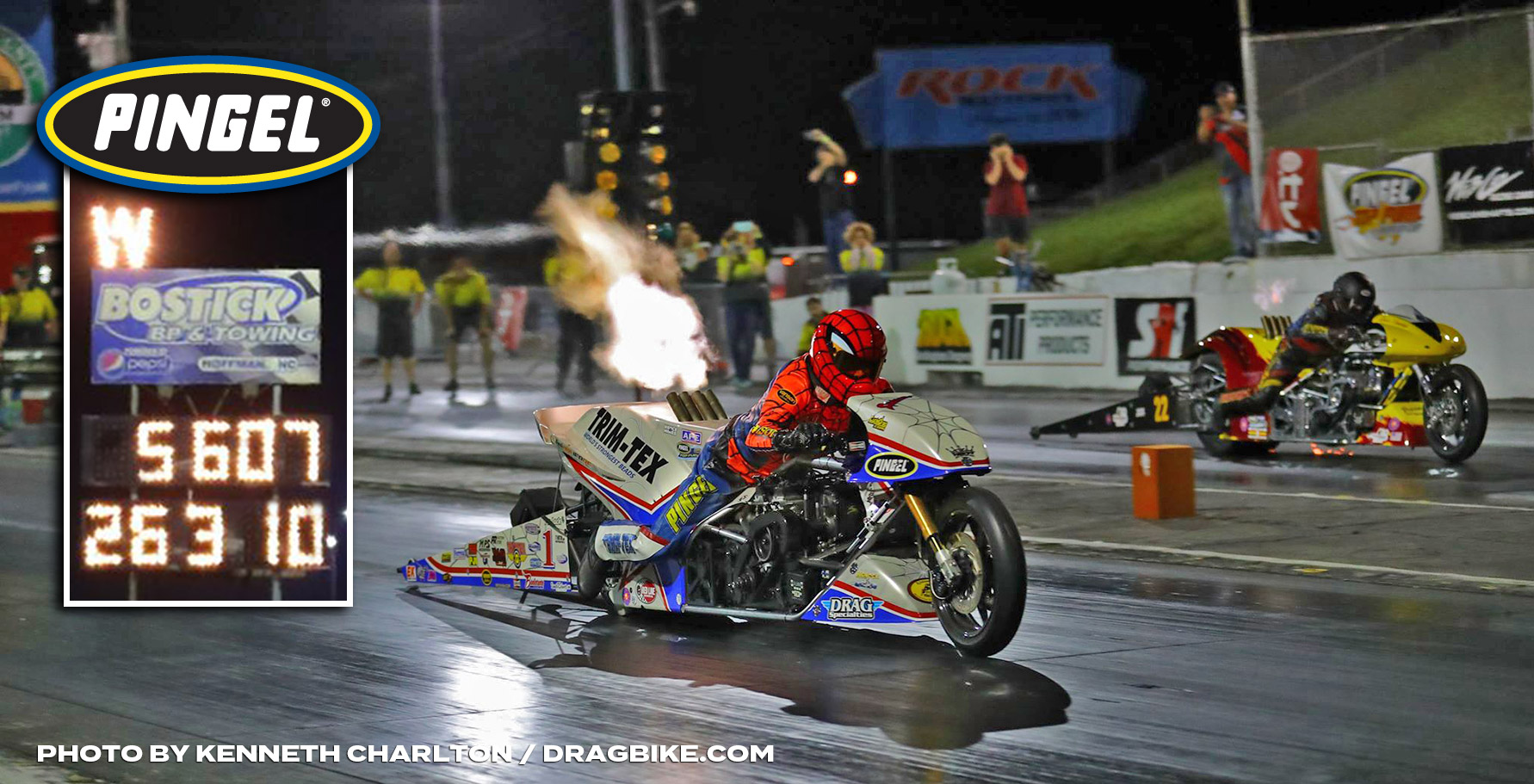 The McBride team is red hot coming off a win at the MTC Nationals at Rockingham Dragway. They were low qualifier with a 5.62, set a new world record of 5.60, and took over the points lead after a win against Dave Vantine. 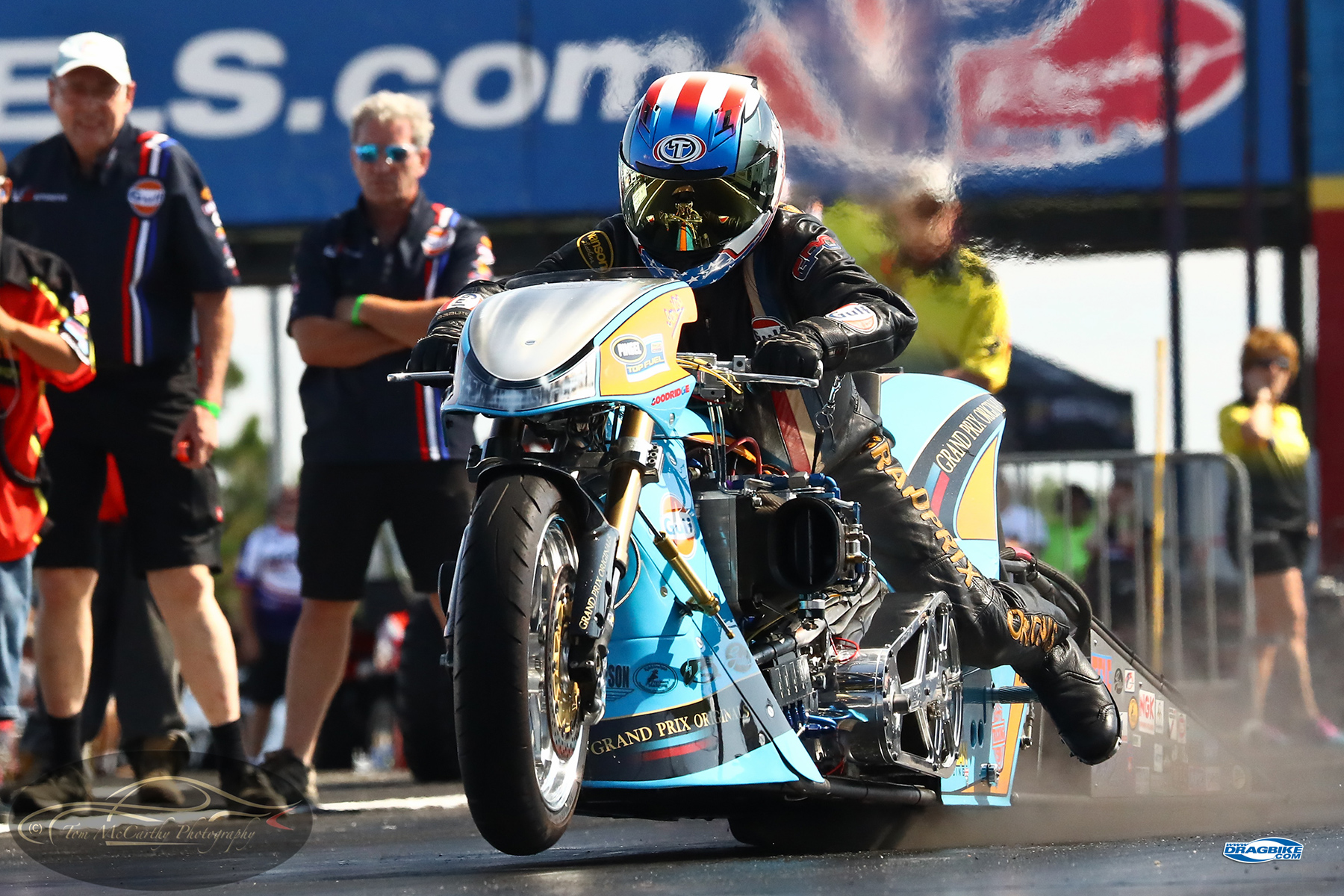 The Gulf Oil team are now 12-time European champions! Filippos Papafilippou, piloted the bike to another championship this year and now has the quickest pass ever on the bike with the stunning 5.662 at 246.74 mph combination. Ian King the 10x European top Fuel motorcycle champion will be piloting the bike during the Fuel Tech World Finals. 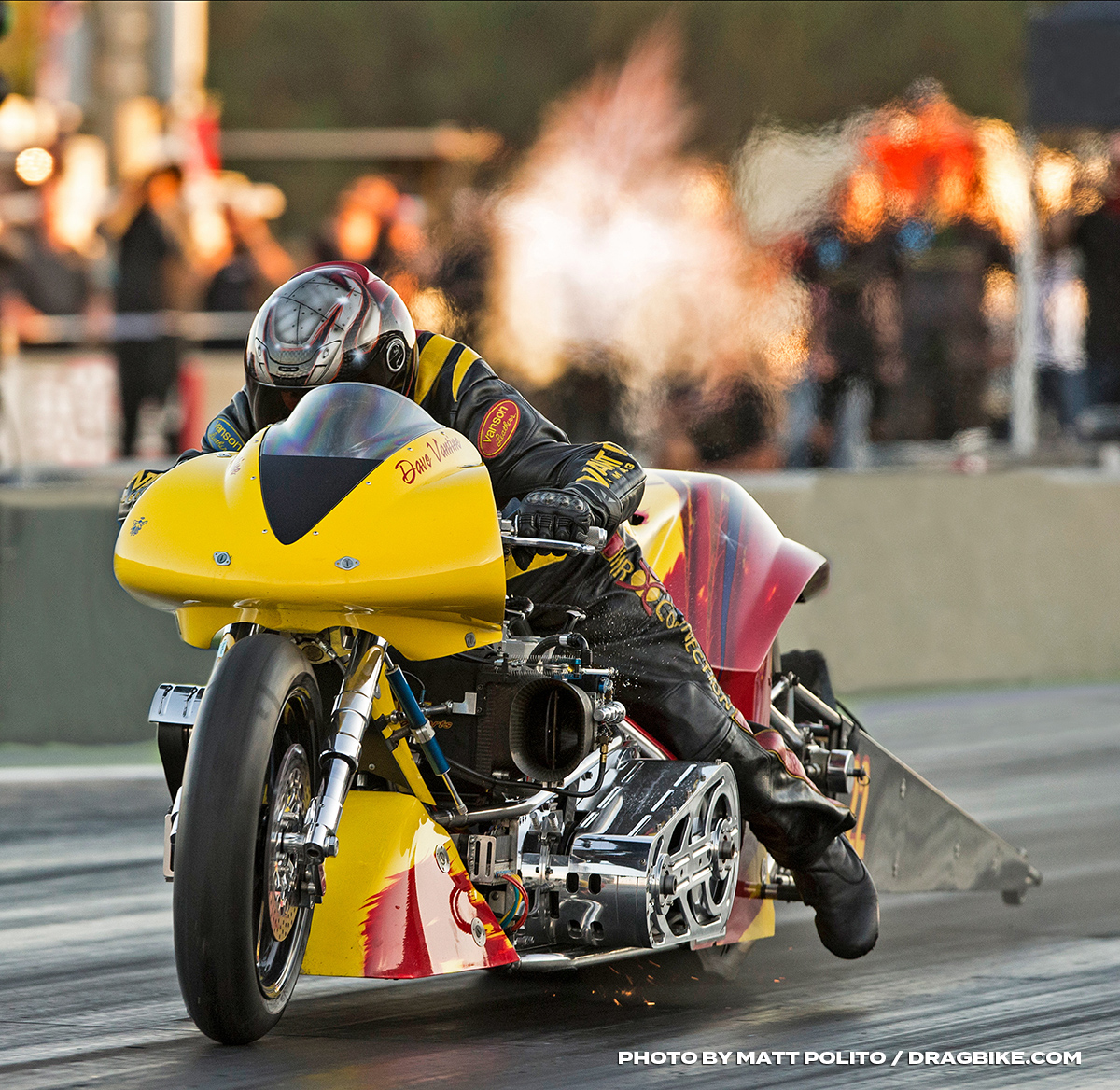 On Sunday, November 24th, the two aforementioned Top Fuel motorcycle titans will have to contend with Dave Vantine, who’s Vantine Nitrosports bike has a best of 5.74 @ 254 MPH and he’s very capable of chopping the tree down on the competition. Let it be known, this is no two-dog-fight race: not at all. Chris Hand on the Red Neck Express is also in it to win it and he’s a certified member of the official MTC 5 Second Club, with his 5.89 @ 230 MPH. 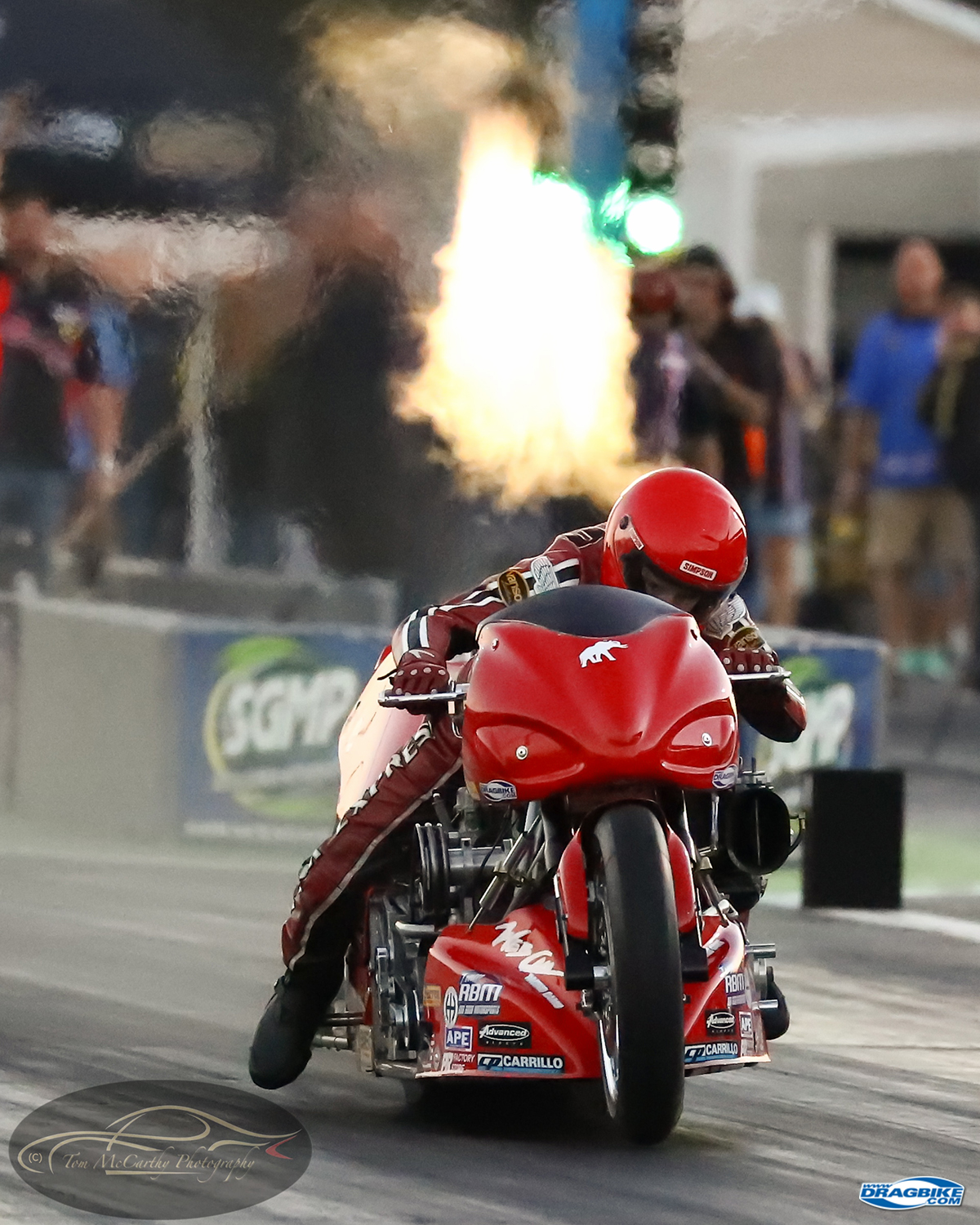 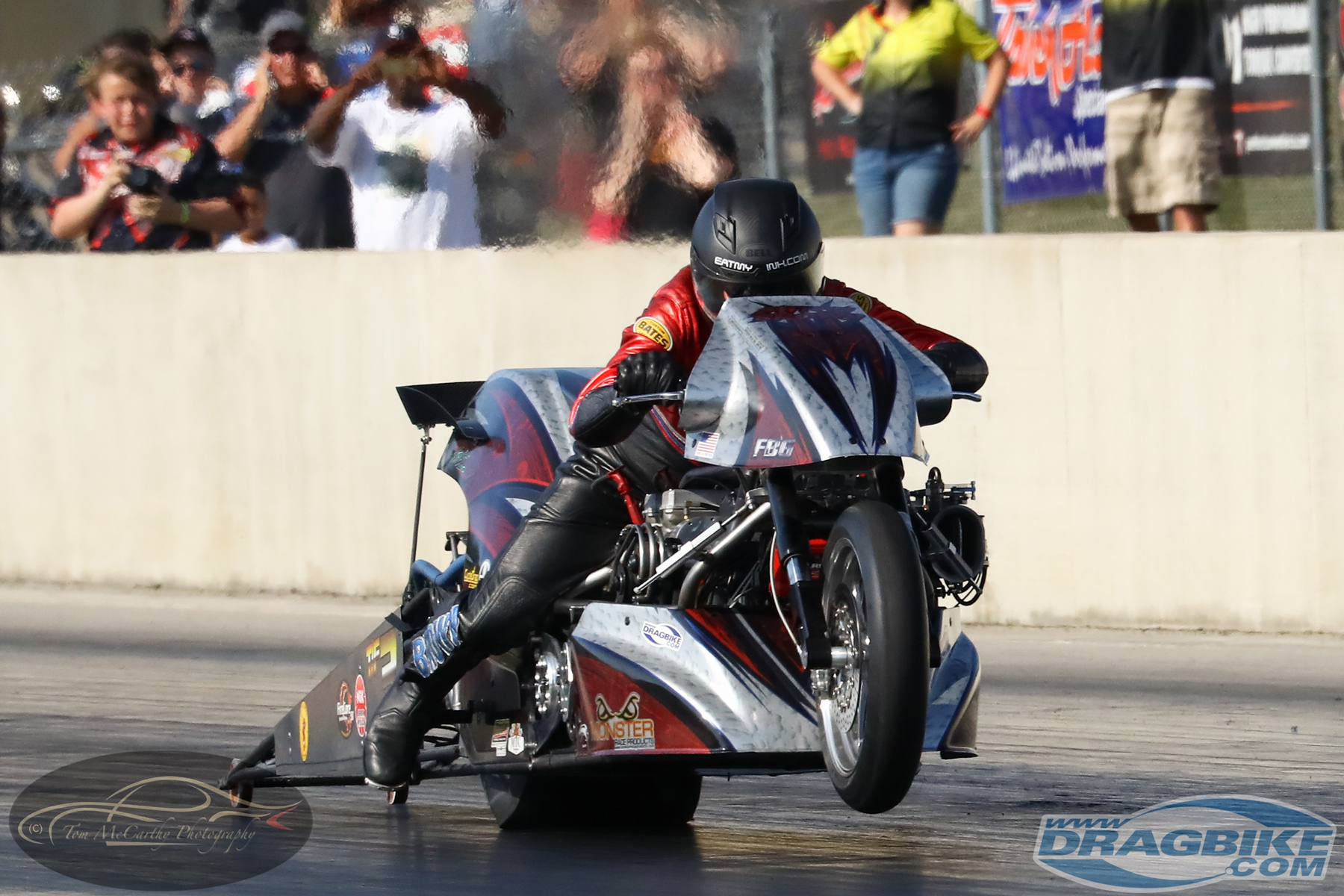 And speaking of five-second-elapsed time motorcycles, Michael Dryden of the Nitro Conspiracy team has let me know we are likely to see Sam Wills and the team at the World Finals addressing new developments on the bike. This will be the single largest gathering of 5 second, Pingel Top Fuel bikes in recent history. 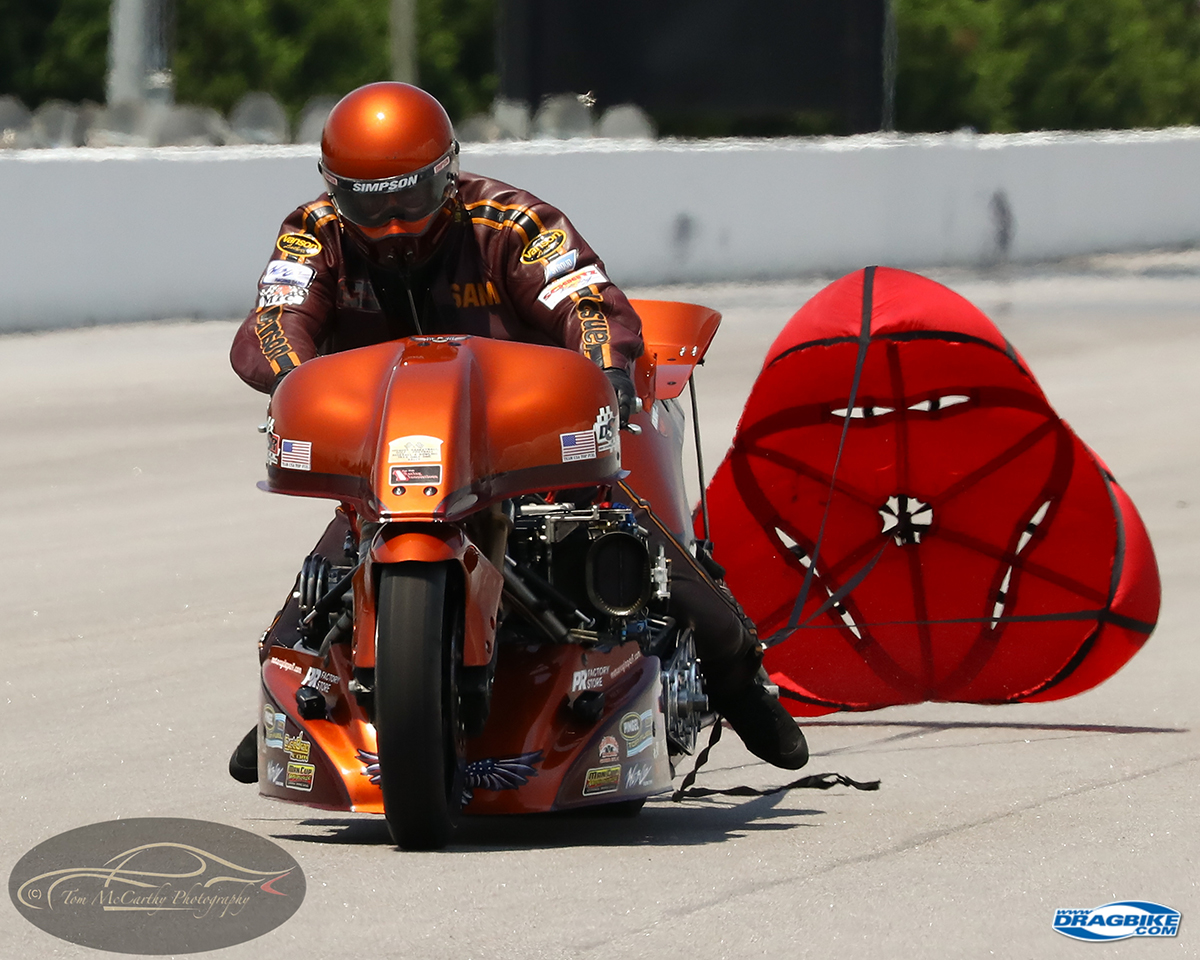 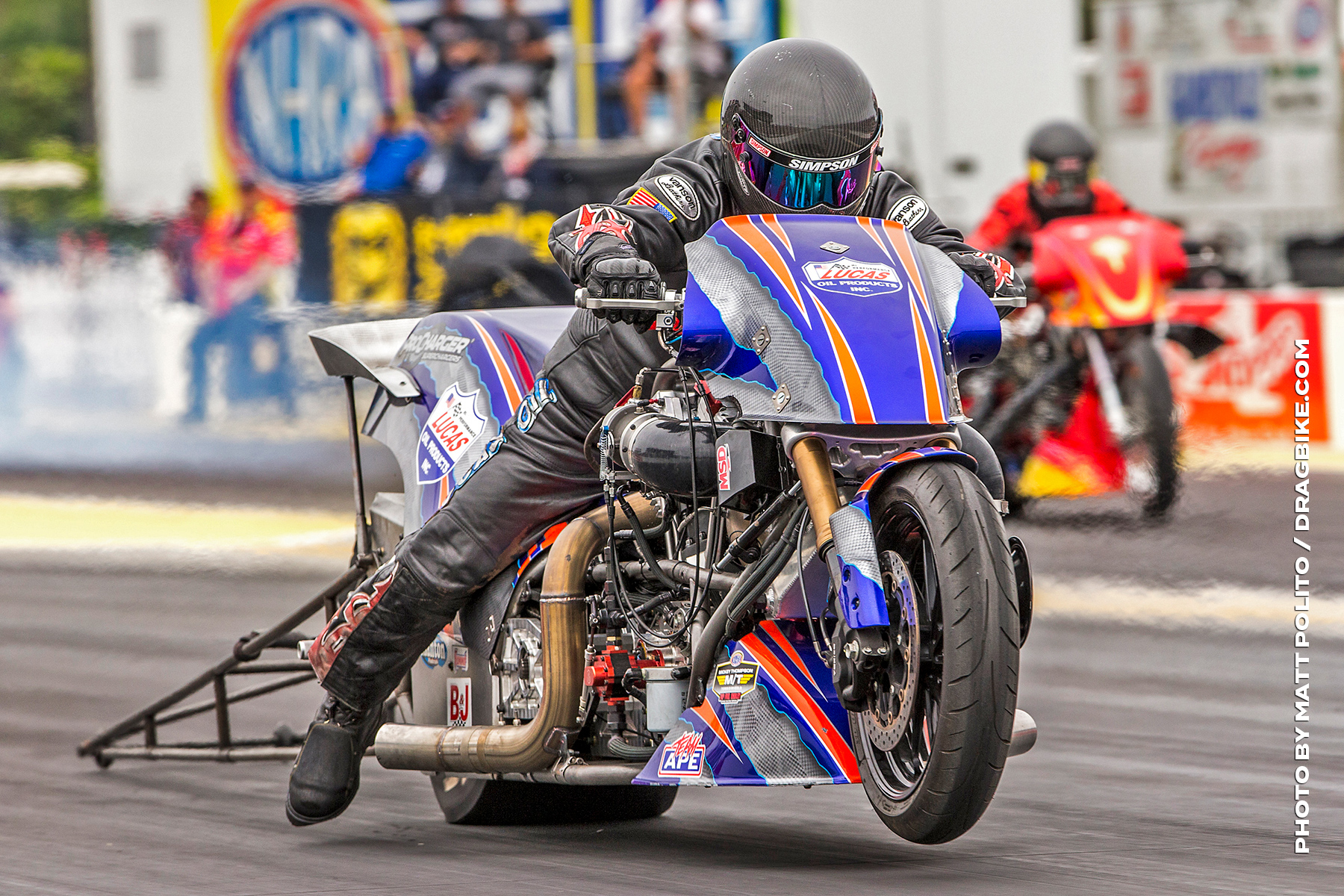 His teammate Randal Andras will also be racing at Valdosta and Randal is just as quick and deadly as Tii. Their new teammate, Tyler Wilson will also be in competiton. 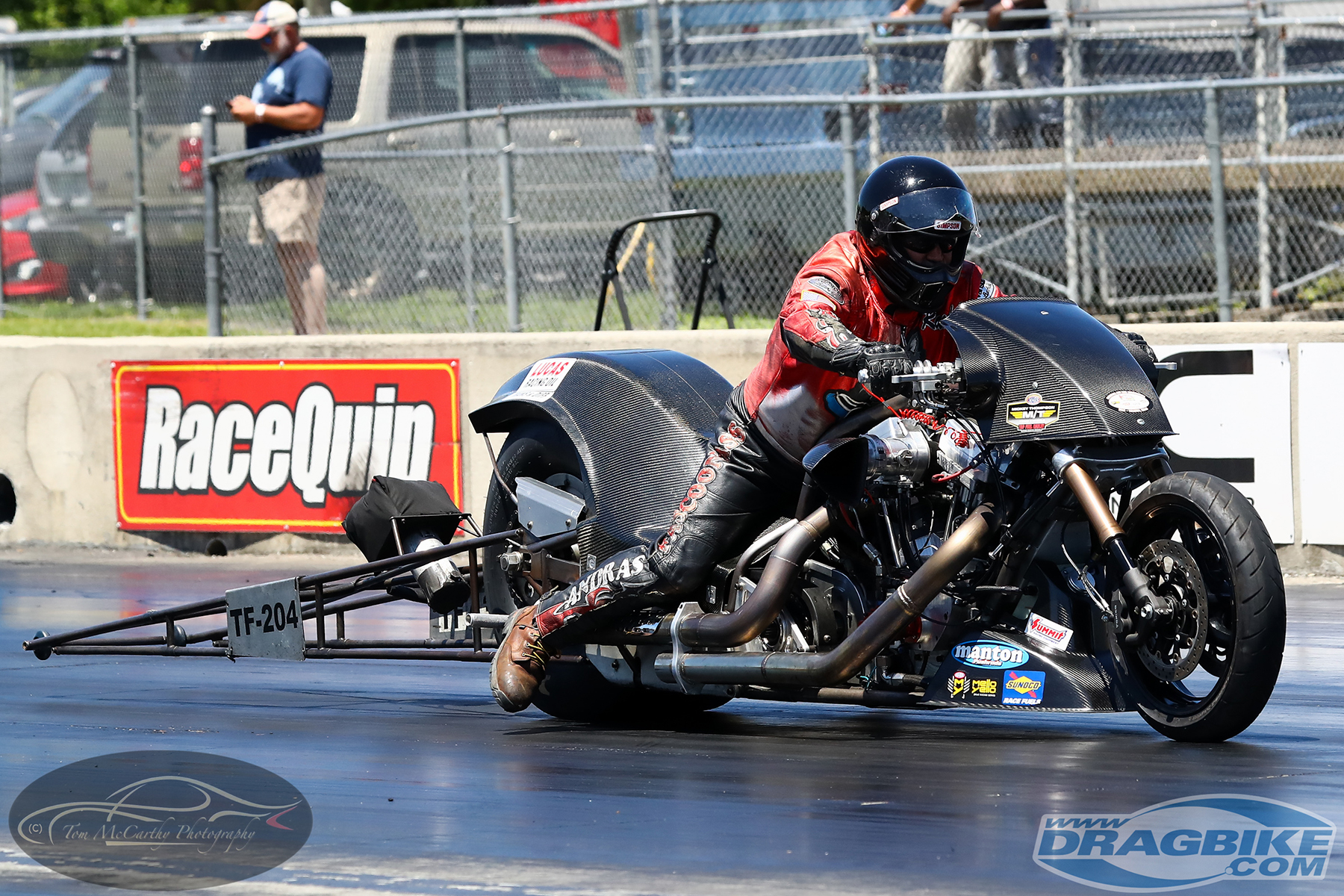 The new teammates of Janette Thornley and Rich Vreeland will be racing in Pingel Top Fuel Twin. Rich will be racing on Janette’s new bike with Buddy Foss and Janette rounding out the team. Tim Kerrigan, who recently returned to action in Top Fuel Harley will also be in the mix. 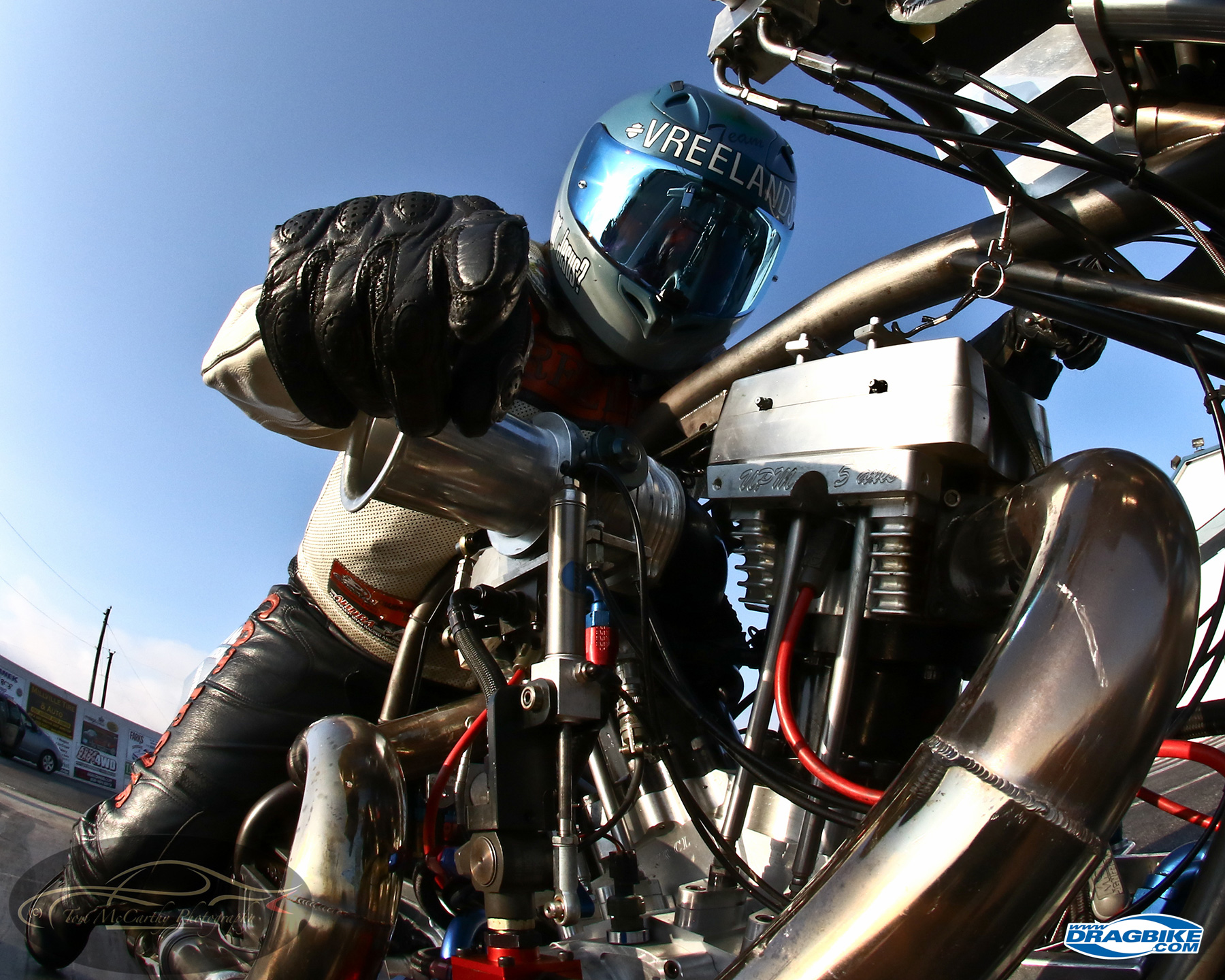 Hawaya Racing Pro Fuel will be a very difficult win for whomever can pull it off. Some of the toughest, and biggest names in Pro Fuel racing will be in attendance: Kirby Apathy, Preston Bartlett, Sam White, Rocky Jackson, all former class champions. 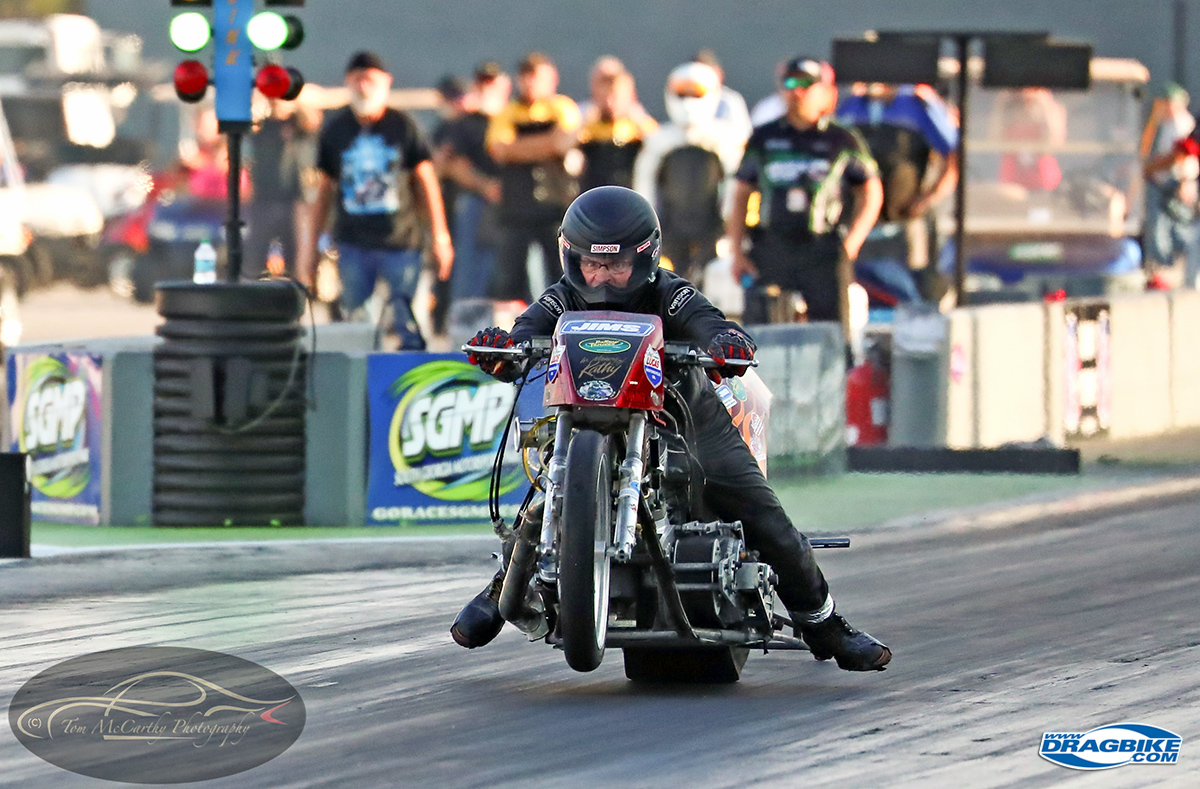 Now add to this, Jim Martin, Jay Beasley, Michael Ray and you’ve got some of the best in Nitro Harley Pro Fuel racing on the planet. Preston Bartlett has a slim lead over Sam White and his ‘White Lightning’ Pro Fuel team, featuring Johnny Vickers, 383 to 343, in championship points. Kirby Apathy, who’s home-made ‘Gunfighter’ bike still holds the world record for the class with a 6.85 @ 185 MPH, will be in the house. Hawaya Racing Pro Fuel is anyone’s race to win at this event! 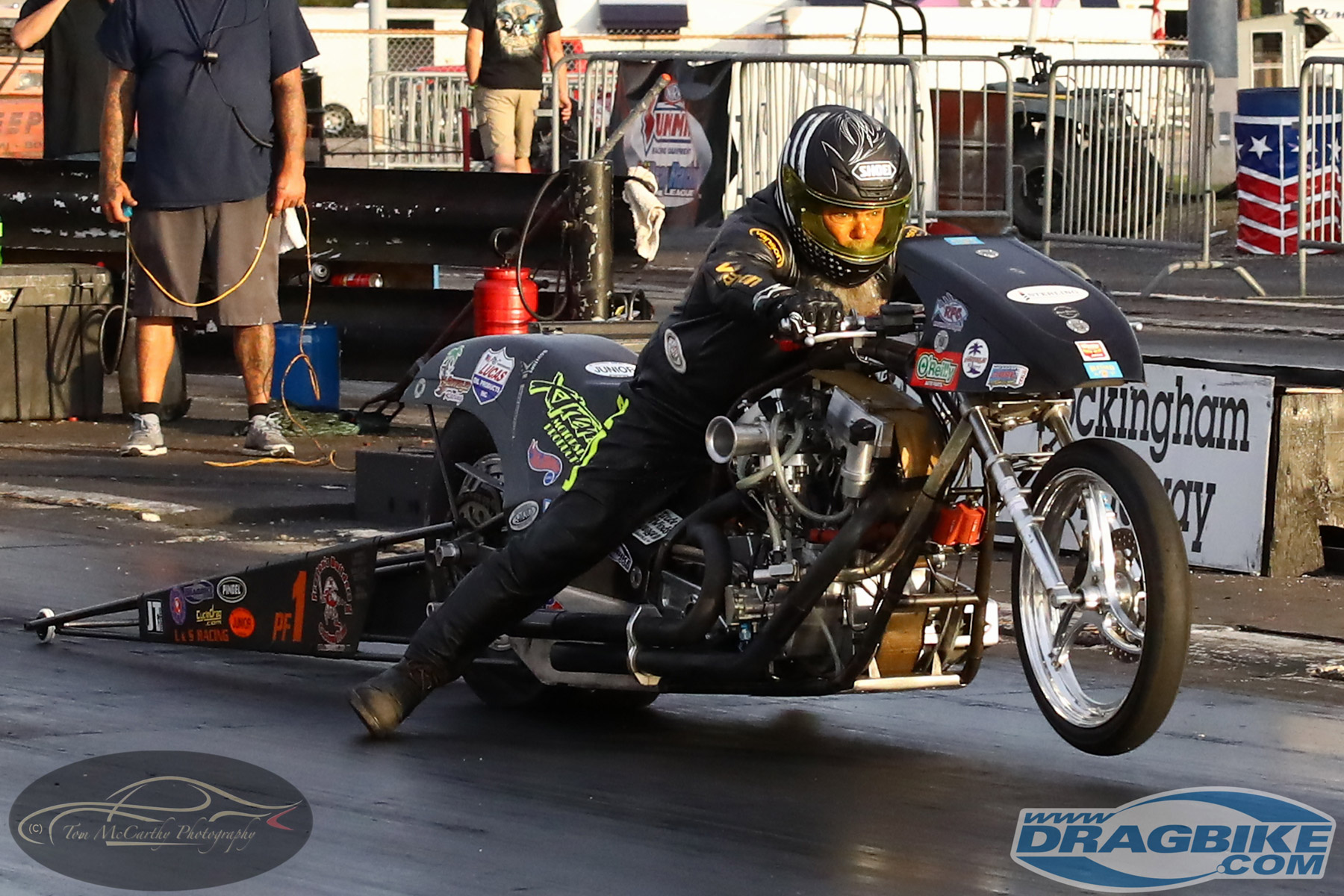 In Falicon Pro Mod, Paul Gast has such a commanding lead 425 to 271 points over Mike Chongris. There is no question who will be wearing the Man Cup #1 plate in Pro Mod for 2020. That part of this race is a foregone conclusion. 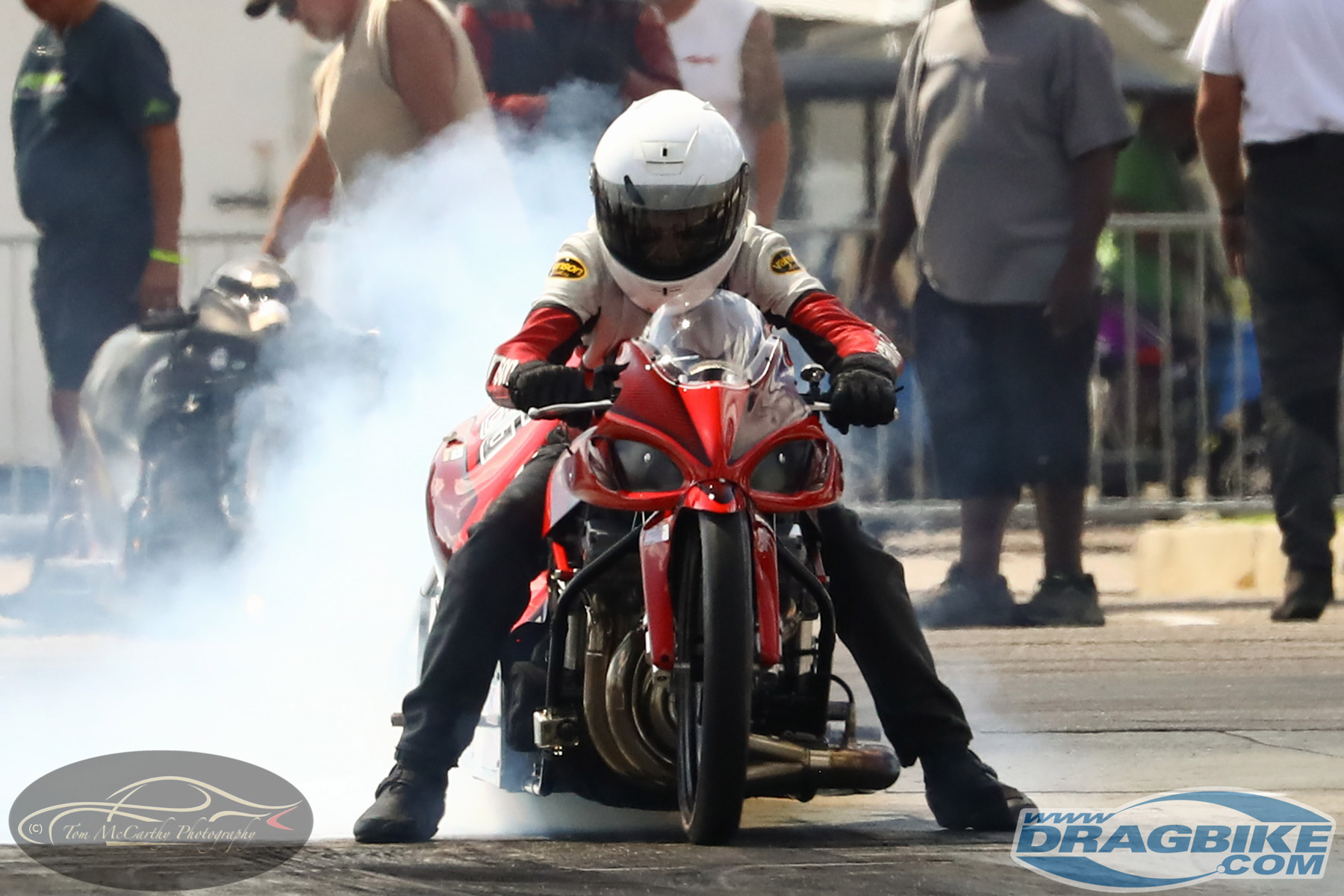 However, there is also no question that the competition coming after Paul Gast is going to push him and his bike to their limits at this event. Jeff House has been 4.0 and he’ll be right there with Mike Chongris and Brunson Grothus, The 4-0-Jones Wreckin Crew will be racing hard, Terry Wynn, Lou Grist and others; they are all capable of giving Mr. Gast a run for his money. Don’t miss out on seeing the uber-quick Falicon Pro Mod bikes! 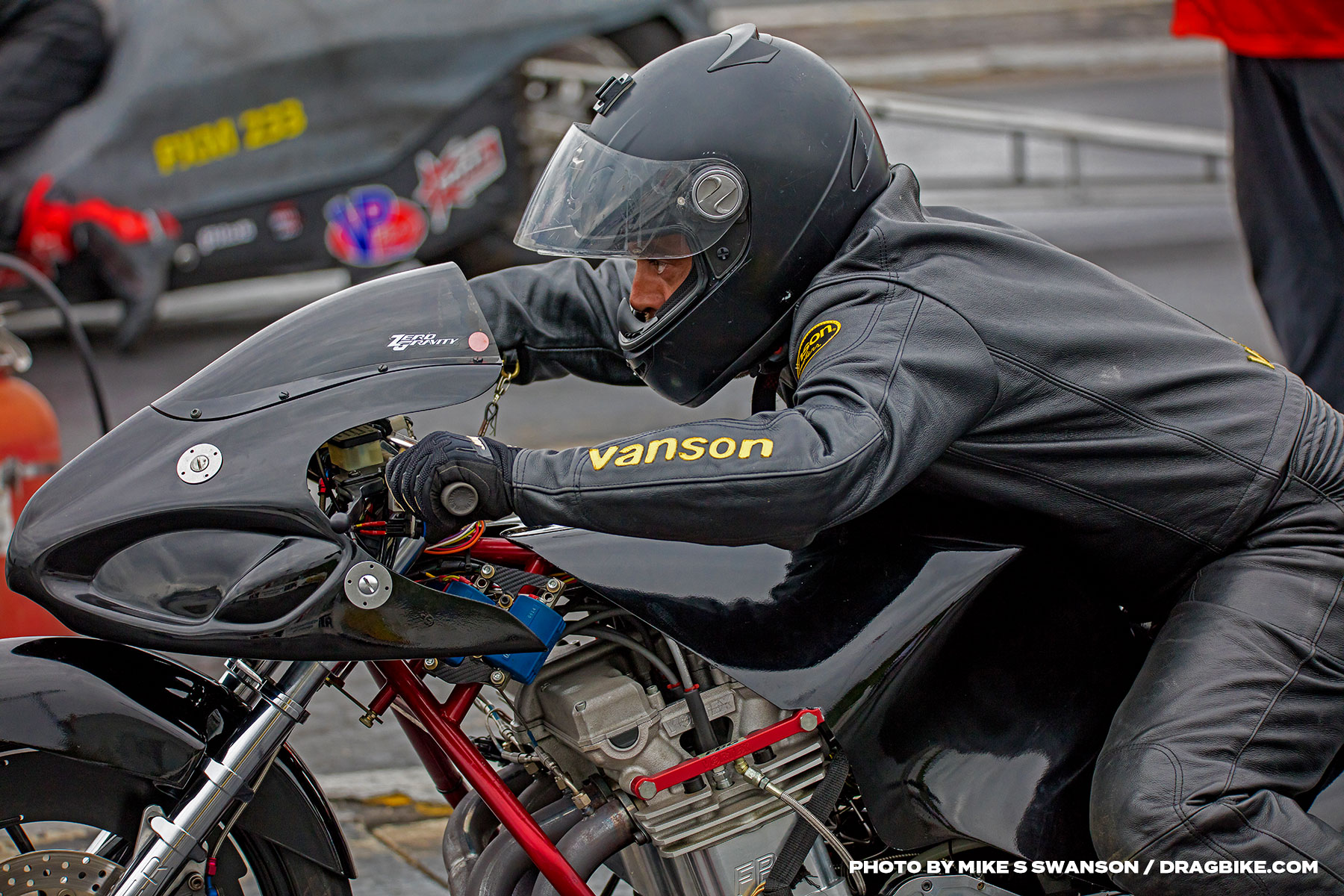 Nitrous Express Pro Open will be interesting – most interesting. The class is currently being led by #1 plate holder Jean Gosselin of Canada on his highly successful “Canadian Express”, tuned by Dan Wagner. 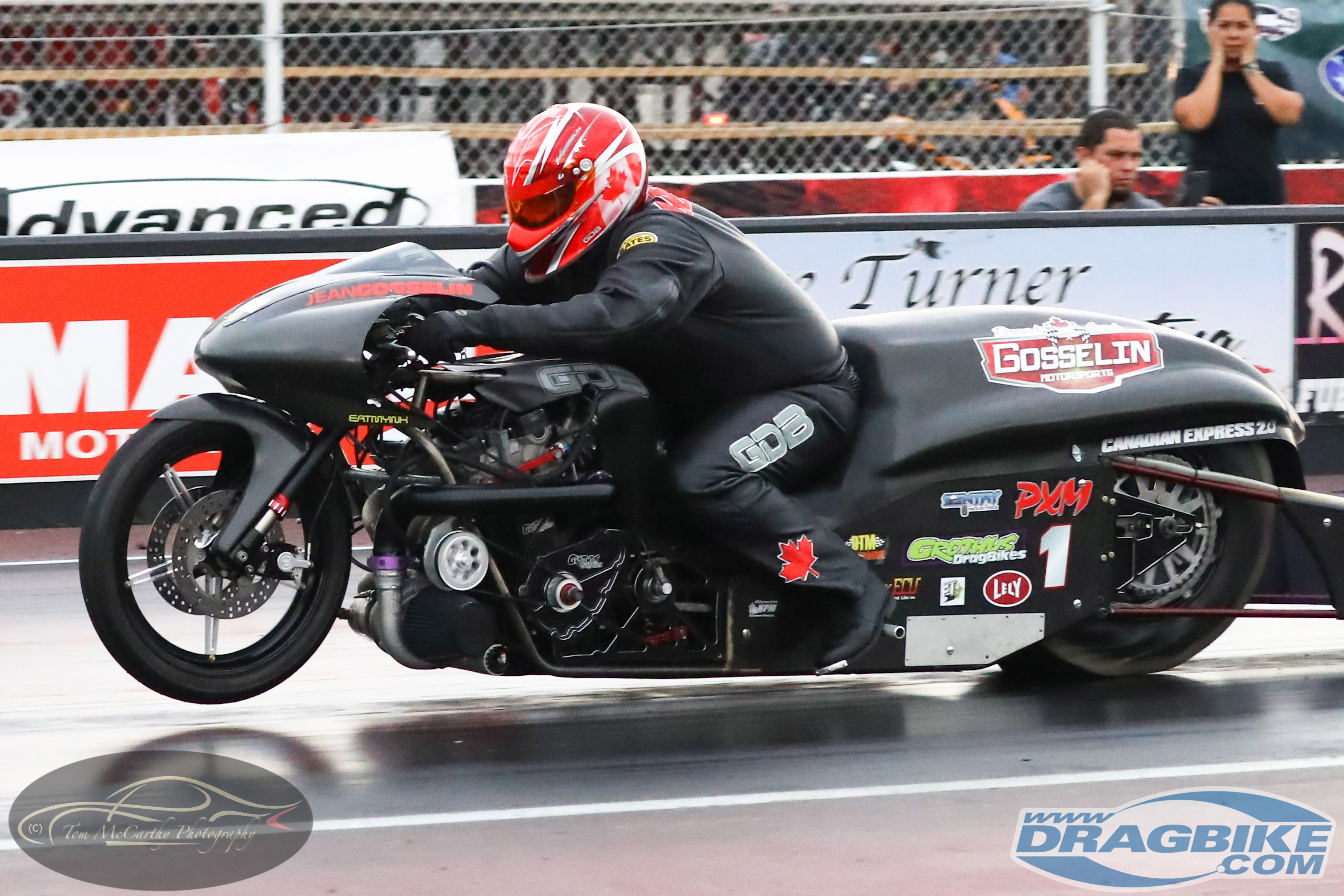 Jean’s 316 class championship points is commanding, but Mark Rendeulk, the former class champion is right behind him with 270 points going into the last race of the season. Mark Rendeluk’s 6.37 in qualifying at the Man Cup MTC Nationals in Rockingham, NC in October was, at the time, a bold statement that he’s back! 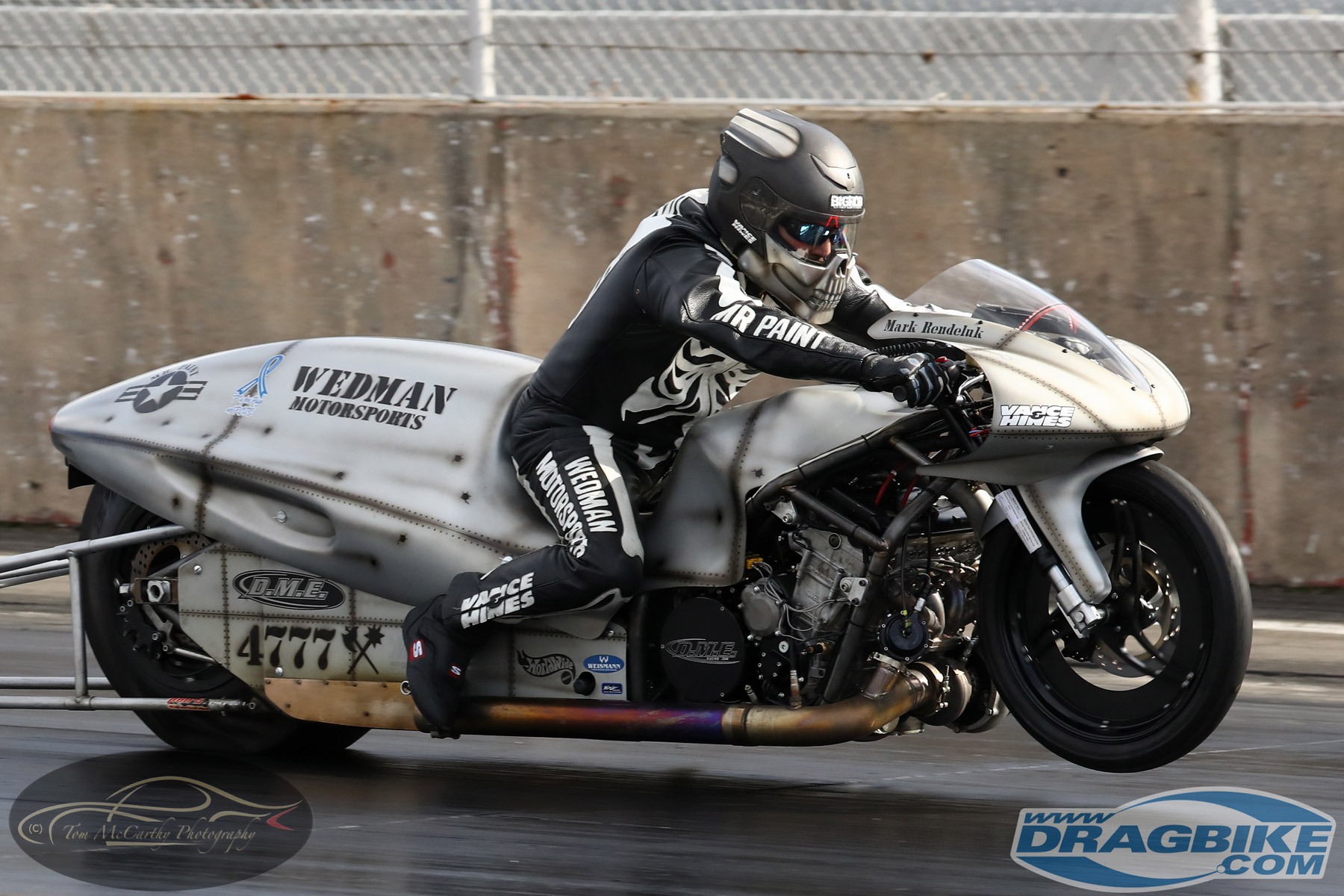 The Chris Wedman tuned bike is hauling ass and I don’t believe for a minute that this bike is even close to it’s potential – it’s a new combination and as Chris and Mark begin to uncover it’s secrets, that bike is going much deeper into the six’s and has the rider and tuner who can put the bike in the 5’s. Pro Open is a class with no limits on power and it’s only a matter of time before someone goes deep and raises the bar big time. Jean Gosselin and his team, with strong support by Grothus Dragbikes is poised to take command for the second year in a row, but they will have to fend off Rob Giard, the original champ of the class from it’s first year of inception. 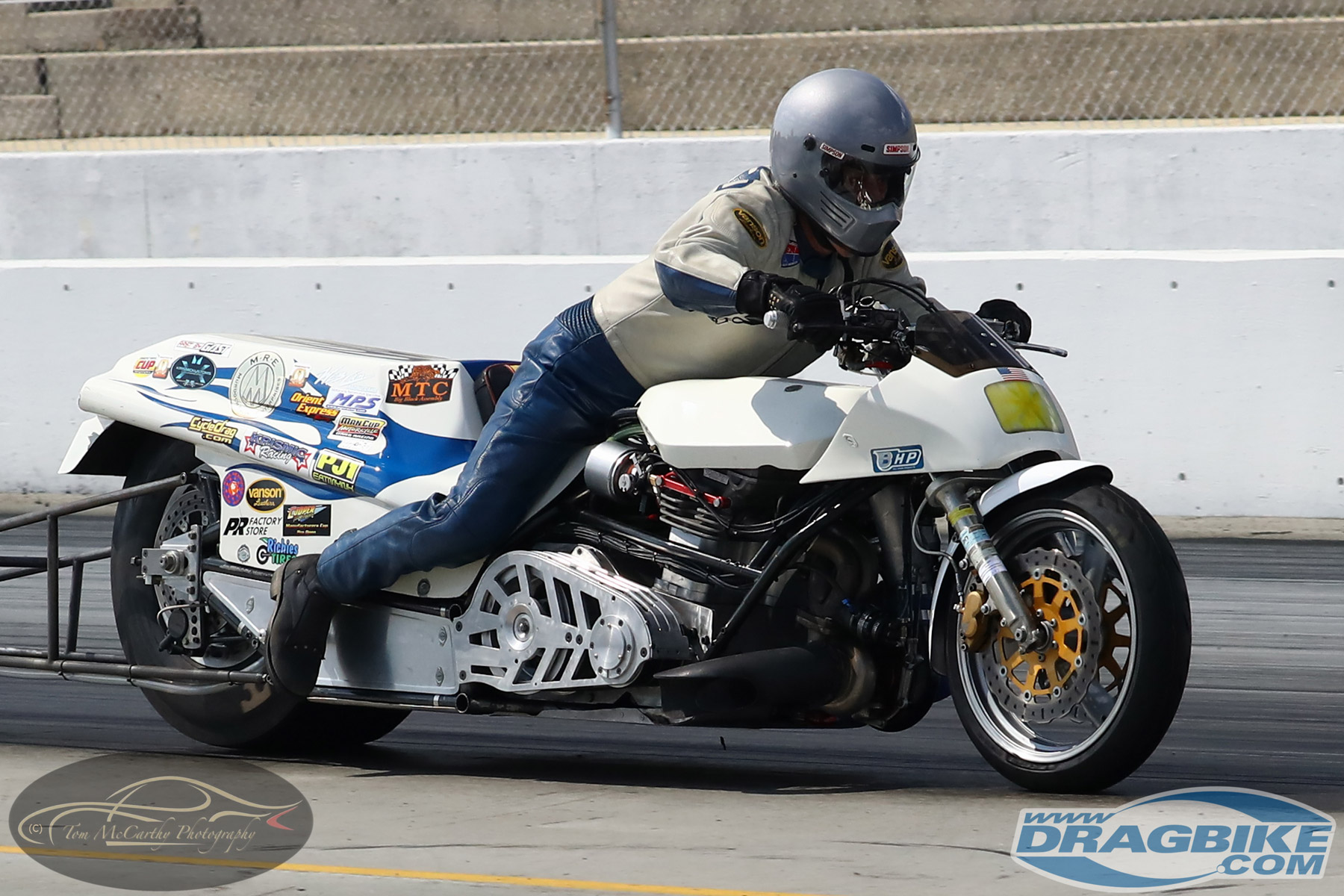 Rob’s Puma powered machine is overdue to leap back into the mid six’s and he’s on it. Niki Zak, the world’s fastest woman on two wheels who was pushing the 6.40’s at Rockingham and she did a stellar job of driving the bike. She too can send any of the big guns packing. Bobby Lovingood, Ronnie Procopio, Larry Hayes, Ron Maddox; we can expect the usual eclectitc mix in NX, Pro Open at the Fuel Tech World finals.

In APE Pro Street racing, Chris Edwards has a two-race win streak going for his efforts and he’ll be looking to make it a hat-trick at the Fuel Tech World Finals. 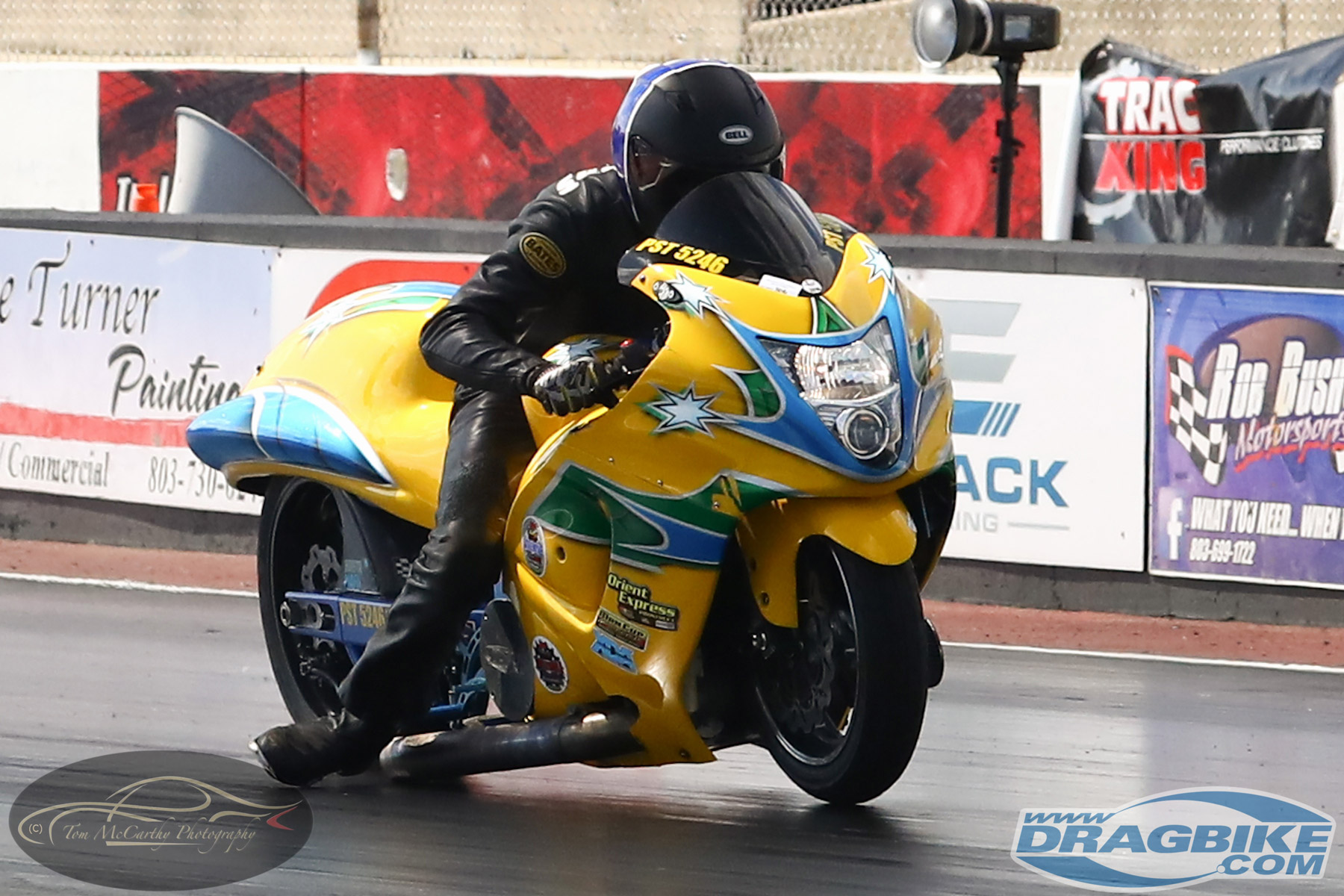 However, he will have to race DME Racing’s Jeremey Teasley, Jason Dunigan, Chris Connelly, along with Richard Gadson, Frankie Stotz and Chris Moore on the fast liter bikes. The Quicktime Motorsports bikes will be in full force, Gabe Frederick returns to action, along with a slew of the fastest Pro Streets bikes the country has to offer. The annual APE All-Star Shootout for the Pro Street bikes will be contested Thursday through Friday, as a chance for the world’s fastest and quickest no-bars bikes to dash for extra cash. The APE Pro Street racing will be fast & furious at this event! 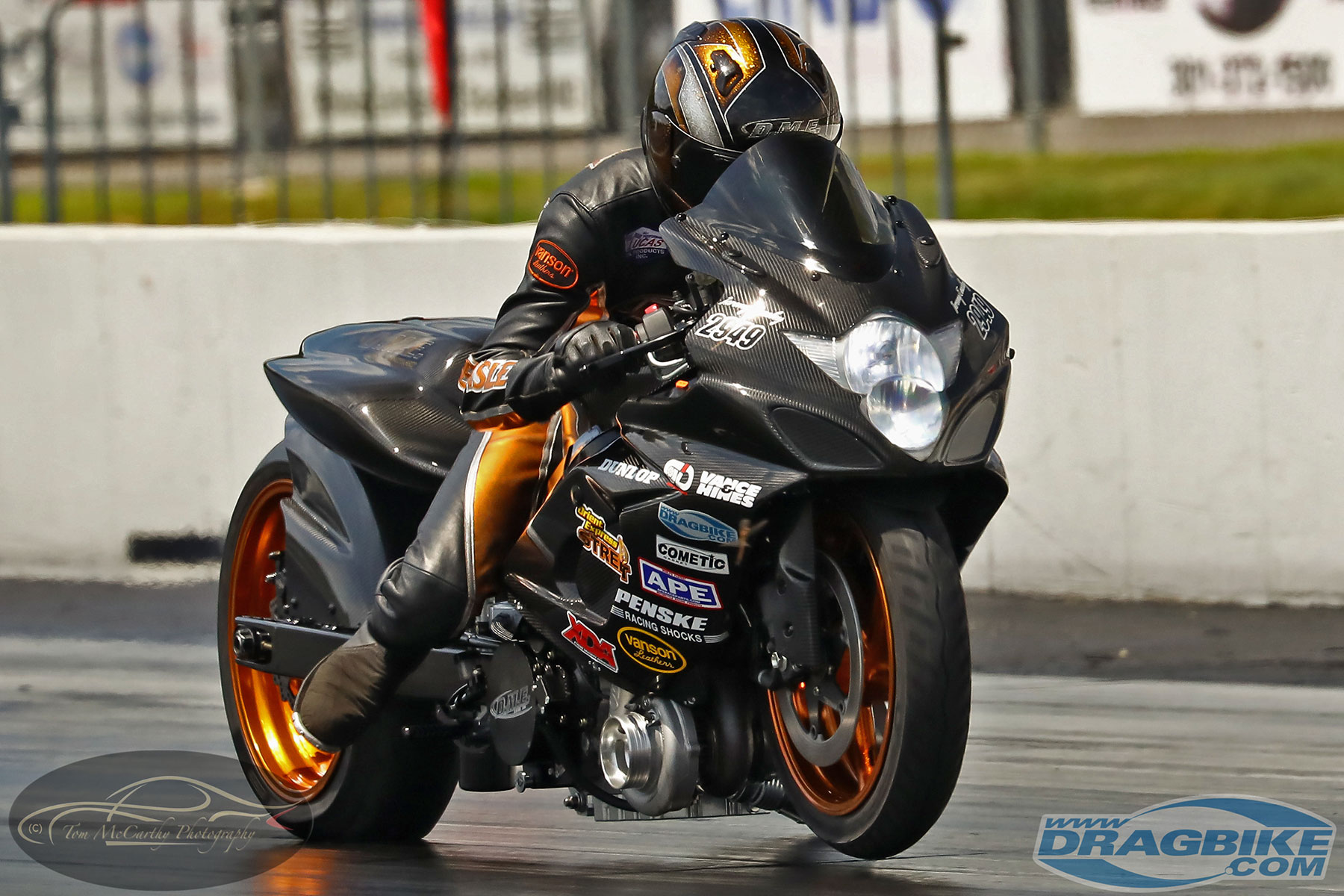 Shinko/WPS Real Street Racing at this event is very likely to be record-setting as this is the last race of the year for the class and the contestants are bring out everything they have to go for the gusto at this race. Spencer Claycomb, in a pre-race brief interview, commented: “We are bringing every spare piston, block and head we have. We are coming after the GOAT and it’s really gonna go or it’s gonna blow!” 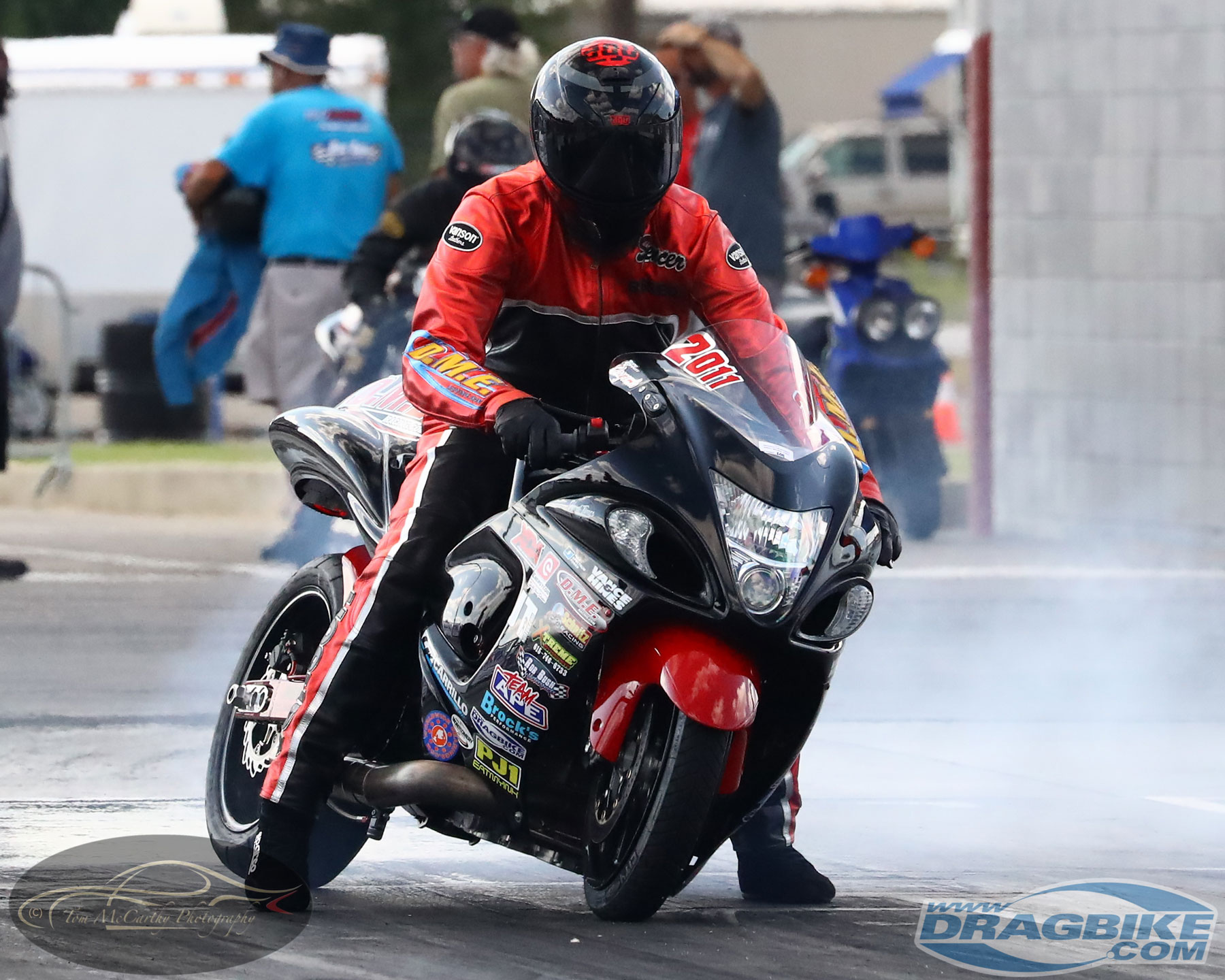 Spencer is currently #2 in points right behind the very smooth and commanding Mark Hylton. Jason Herron and Jason Fernandez are right behind Spencer. Hot shoe Jeremey Teasley may be in 5th place in this class, but he’s got something for everyone, and he will unleash it at the Fuel Tech World Finals. Sorry, not sorry about that. 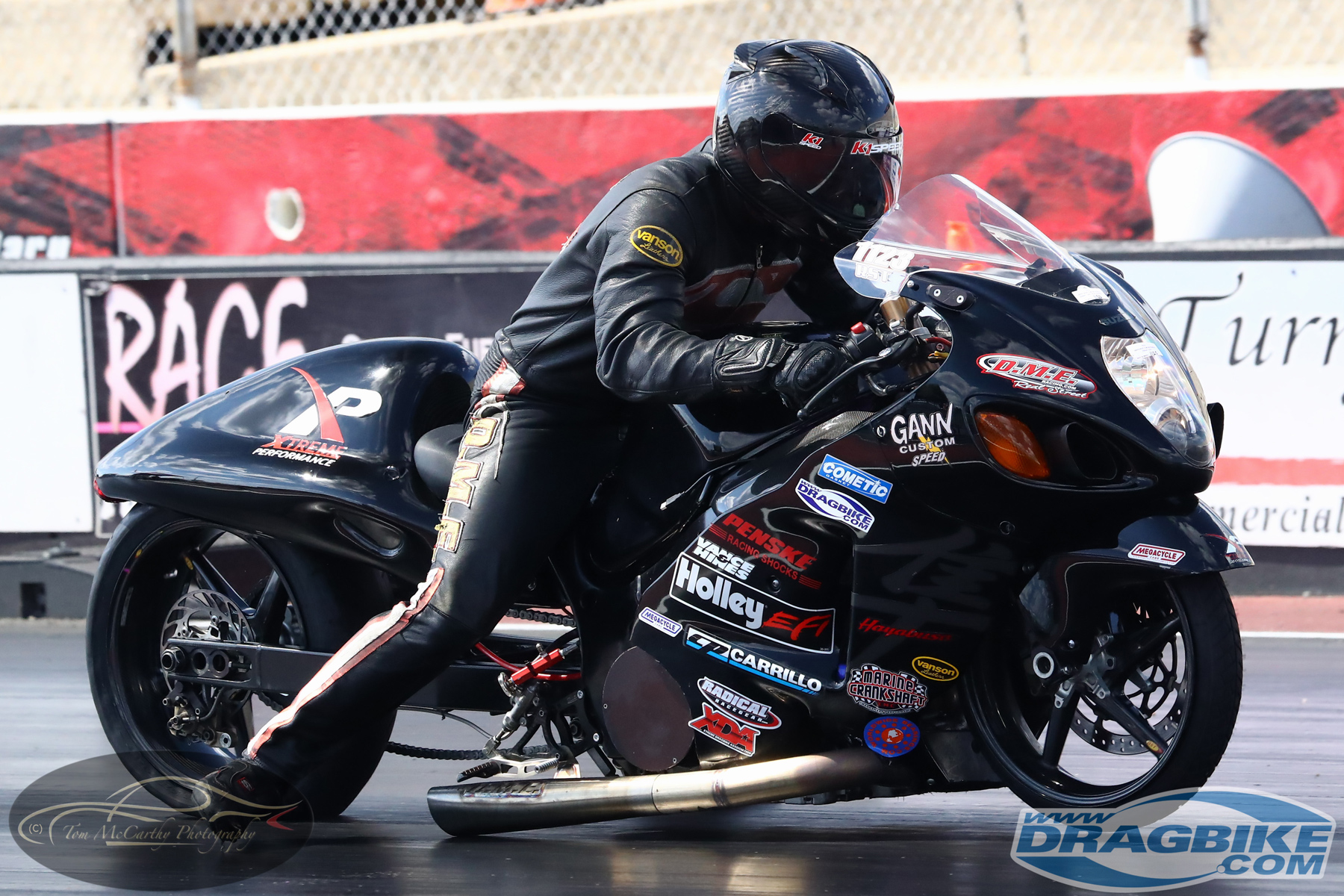 Grothus Ultra 4.60 at this event is going to be brutal to win for the contestant who can pull it off. The action will begin on Thursday with the Man Cup Grothus Drag Bikes Ultra 4.60 Challenge. In Grothus Ultra 4.60 Points Tony Mullen is only 18 points ahead of Mike Chongris and Broderick Jackson, Mike Lingo and John Schwartz will not give up on the championship without a fight. Throttle party happening here folks. 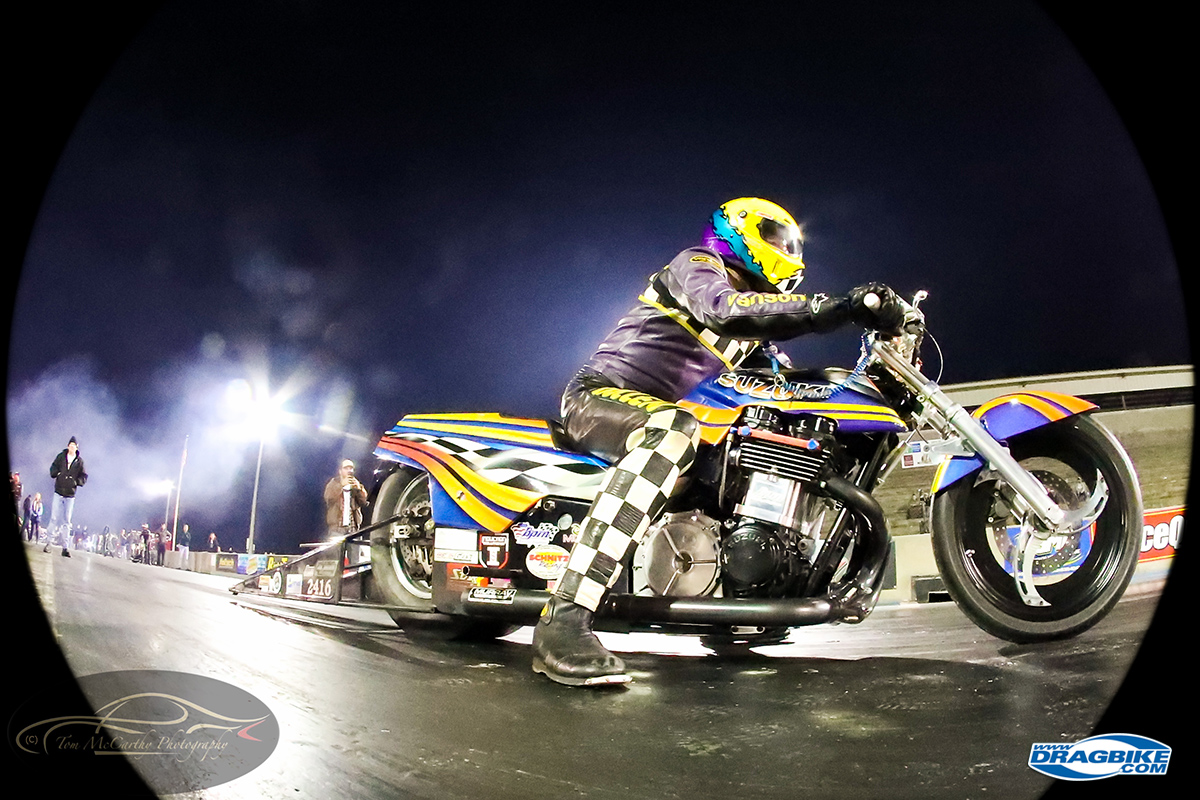 Star Power Top Gas Racing, Ricardo Marte has 298 championship points, followed by Mike Lingo with 229 and Scott Saemisch holding 215 points. The spoiler here is number four in points is the ever-deadly Jeremy Teasley, who will be head hunting at the FuelTech World Finals. This is going to have quite an impact on the class. While Jeremy currently holds 195 points, even if he cleans the table and wins, it’s unlikely he can win the championship. However, if he knocks out the kingpins early, this can really upset the balance of power. Star Racing Top Gas will be Top Shelf at the World Finals.

MTC Super Comp will be an all-out cage match between some of the toughest in sportsman racing. Going into the World Finals, Spencer Claycomb is #1 with 231 championship points. David Fletcher is right behind him with 212, followed closely by Dalton Markham with 197 and Dusty Brazel with 193. Brian Dale then enters the picture with 180 points. As you can see, any of these top five racers can win the championship. The real question is: Who really wants it and how badly? All of these racers are just tough as nails. Dusty would love to hang on to his #1 plate he’s had for two seasons now. But, Claycomb and Fletcher are not going away easily. MTC Super Comp will be super tough on Sunday! 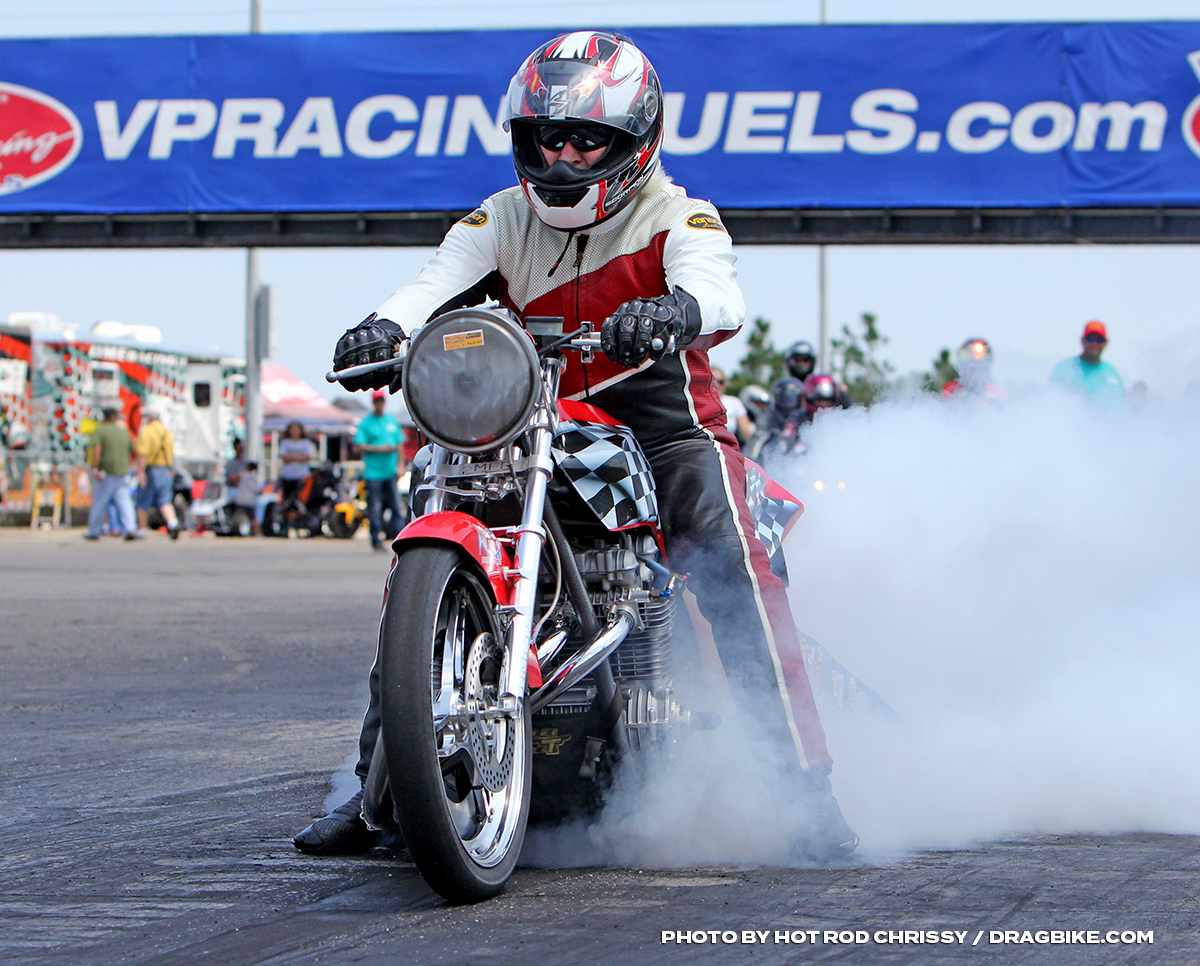 Wiseco Street Fighter class is another class that’s too close to call going into the Fuel Tech World Finals. Pablo Gonzalez has been red hot as of late and his #1 points position with 277 championship points is being challenged heavily by Dusty Brazel and his 264 points. And Dusty has Bob Burt only ten points behind Dusty! These three monsters are also being challenged by Ron Arnold, Dennis Padilla, and Vance Houdyshell. Sunday will decide who has the right stuff here. 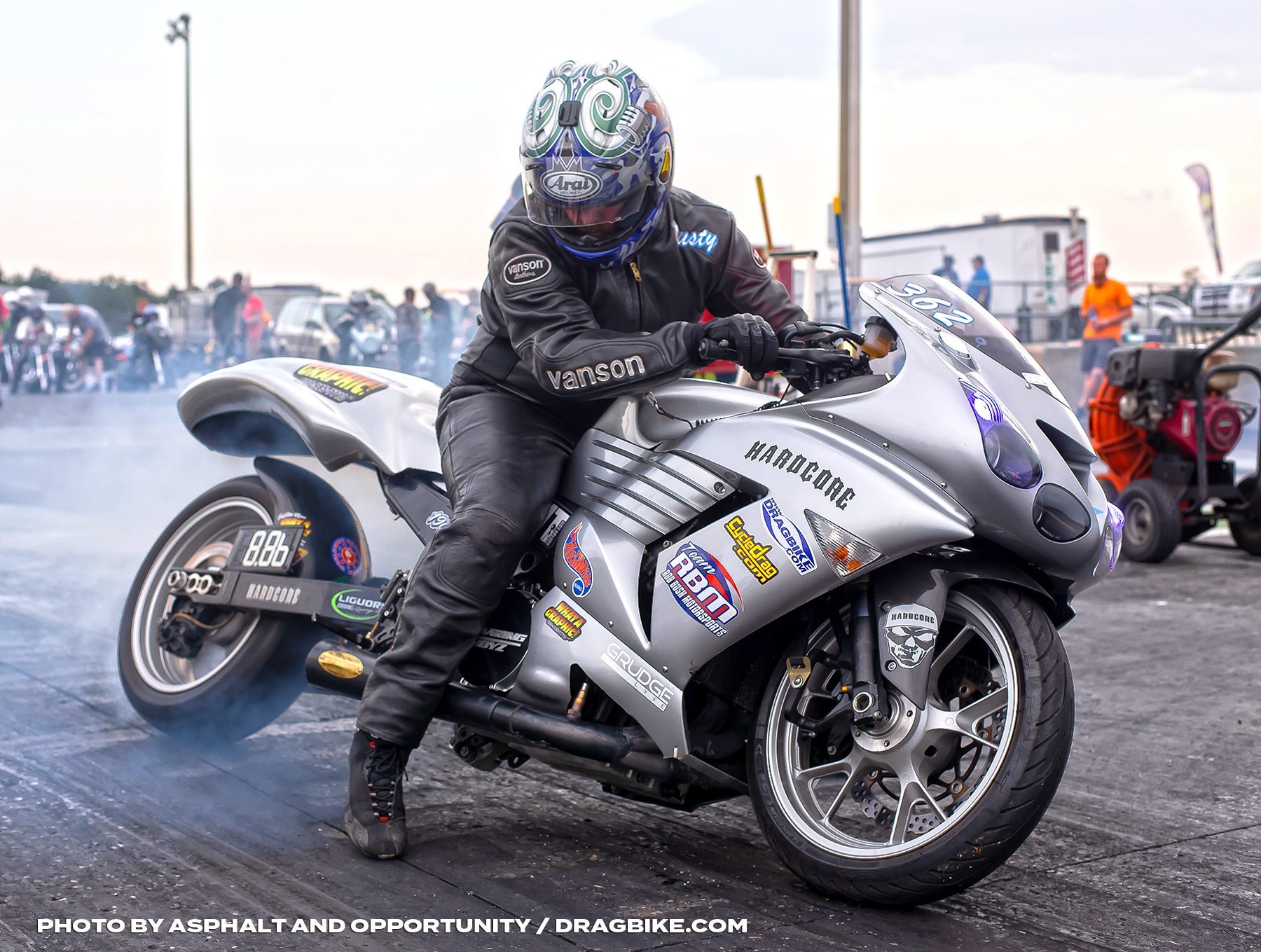 ET class racing for the FuelTech World Finals will be two days of tough racing and it’s not uncommon for racers to endure seven to nine rounds of racing to win. It’s as much an endurance test as it is skilled racing. In MPS Racing Pro ET, Gary Russell has been battling his heart out to win the title in 2019 and he’s currently #1 in the class with 440 points. In Liska Racing Street ET: Bob Burt is in the #1 spot followed by Pablo Gonzalez and Jeremy Burt. In Vance & Hines Race shop V-Twin racing, Vance Houdyshell has 72 point lead over Loren Potter, who’s followed by Freddy Barreiro and the always tough Crosby Blair. 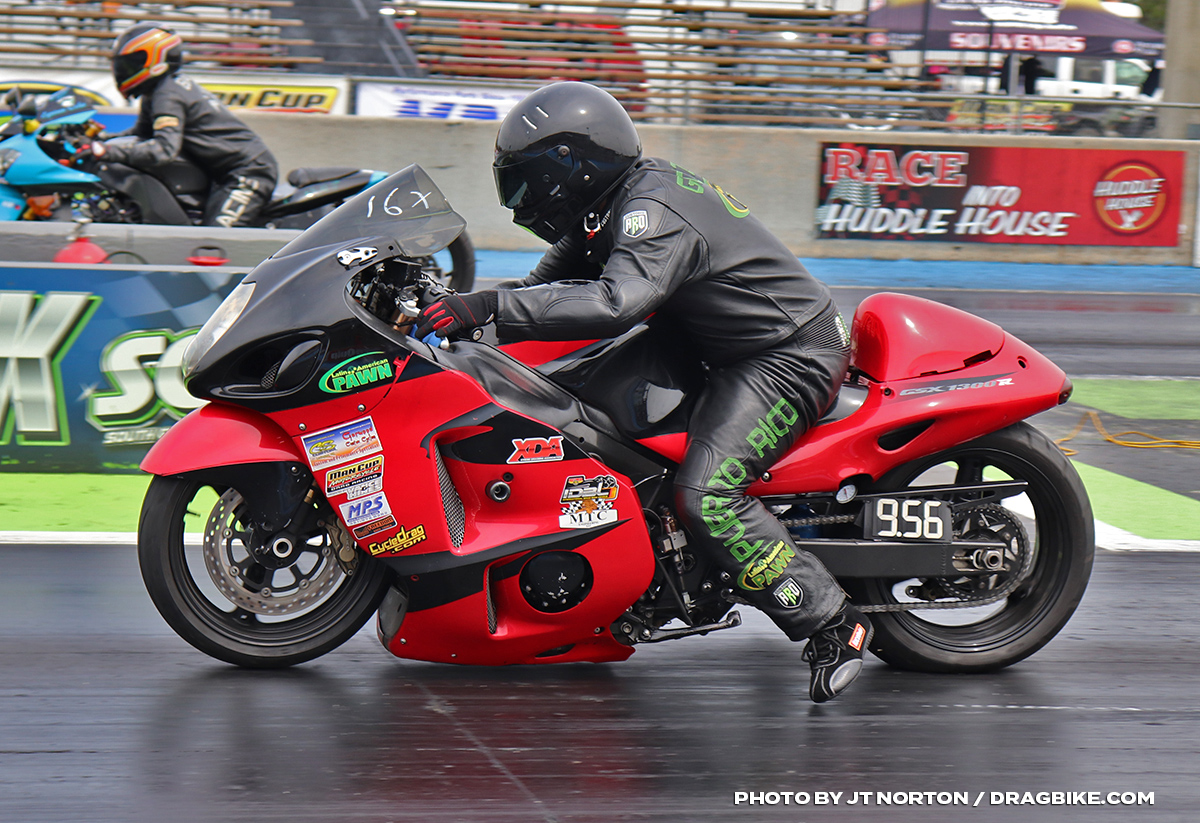 Special Announcement: George Bryce will be match racing his custom bagger ‘Bagzilla’ against Marc Fricke and his ‘Boogy Man’ bagger. Then best two out of three winner will take home 3K cash and bragging rights. Watch for these wheel standing, crowd pleasing show stoppers! Also, on the manufacturers midway, at the APE Products tent, stop by and see the Russ Collins world famous Atchison, Topeka, and Santa Fe, Triple engine Honda Top Fuel Motorcycle. Stop by and see Russ Collins Jr who will be on hand with Jerry Cooper. Cooper Performance and a cast of All Stars has played a key roll in assisting with the restoration of this very historic motorcycle, which is almost complete. 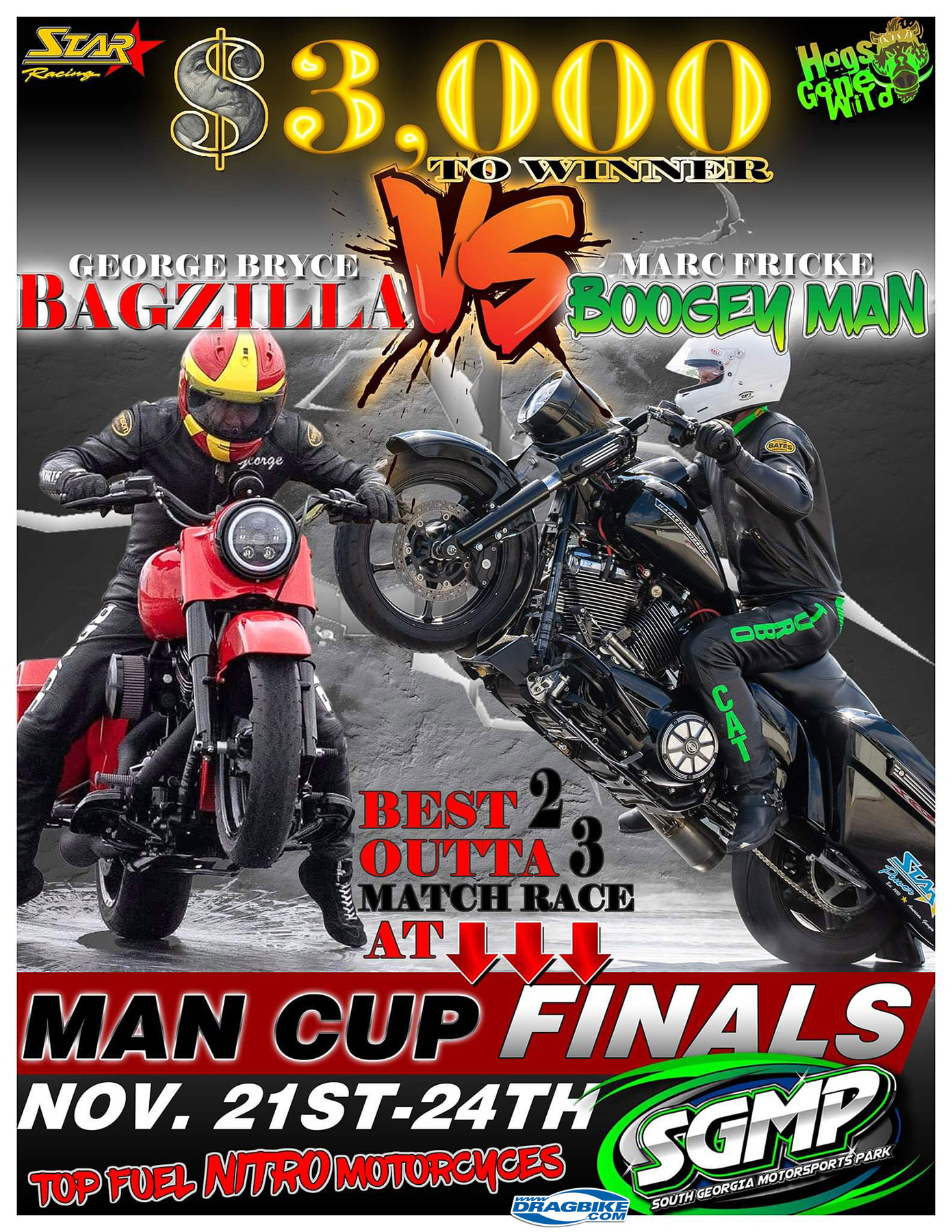 Gates open on Wednesday for parking. There will also be a test & tune from 11am to 5:30. Thursday will begin the actual racing program and open testing will be allowed as well, please see the event flyer for details. See you there!

Parking
Free parking in the grass lot north of the pit gate.
$20.00 pit parking per spectator only car/truck/motorhome vehicle – one-time charge and good for the entire event duration