A scant 147 days ago, the ManCup closed out a great 2015 season at the Finals with Dave Vantine posting the third quickest run in the history of the sport. His blistering 5.77 nabbed him his first ever Pingel Top Fuel event title. Fast forward the clock to 2016 and final countdown is on. The ManCup is poised to kick-off the season with this weekends Exoticycle / Roaring Toyz Spring Cup at SGMP just outside Valdosta, Georgia. 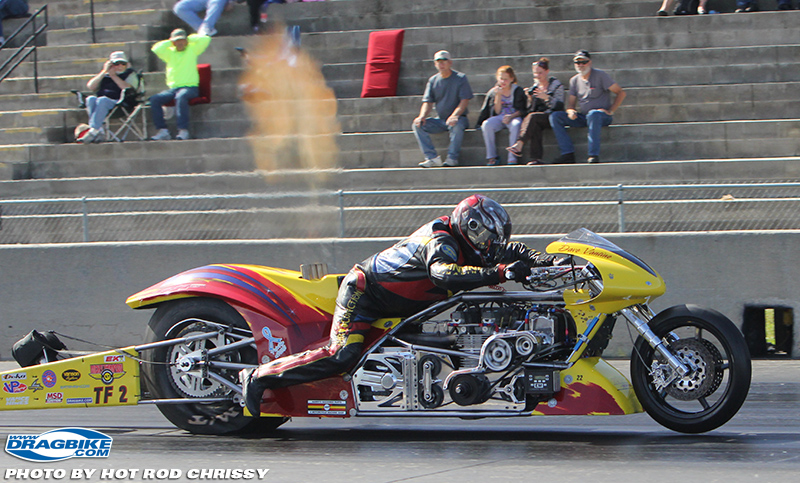 Perennial Pingel Top Fuel champion Larry “Spiderman” McBride has had arguably his busiest off-season ever. Brother and Crew Chief Steve McBride put the finishing touches on their all new, state of the art Trim-Tex / Pingel sponsored Top Fueler in time for a closed doors test session at Orlando Speed World in February. Adhering to a self-imposed eighth mile only agenda, the McBride brothers and crew left OSW licking their chops and counting the days down until the ManCup opener. Point blank, they feel they have a machine capable of returning them the “Worlds Quickest” title that they held for so long right out of the box! Yes, you read that right; With the fantastic conditions expected this weekend, the McBride team feels that a five sixty something time slip is not out of the question!

Think the above-mentioned off-season for Team McBride was busy? As hard as it may be to fathom, it pales in comparison to the overdrive of a winter Falicon Pro Mod standout Paul “FBG” Gast has endured. Paul didn’t even know he was building a new bike when qualifying ended Saturday night at the Finals! But, after a disappointing early round loss Paul abruptly and decidedly knew it was time to retire his current steed. He hunted down well-known chassis builder, Walt Timblin, of Timblin Chassis to discuss building a bike. Before Sunday’s Falicon Pro Mod winner was even crowned, Paul had an order in for a brand new pipe to put him on even footing with the classes top runners. Incredibly, the brand new chassis arrived at the snow covered Grand Island New York headquarters of Fast By Gast before the ball even dropped in Times Square! Over the coming weeks, the arduous and painstaking task of transforming a bare rolling chassis into a race ready Pro Mod contender began to take shape. Although unable to test due to there (still) being snow on the ground in upstate New York as well as the massive work load at FBG, Paul is extremely confident that his brand new machine will perform right out of the box. Like McBride, Gast can not wait to get to the renowned SGMP facility. Having very lofty goals right out of the gate, Paul believes he can lay down a 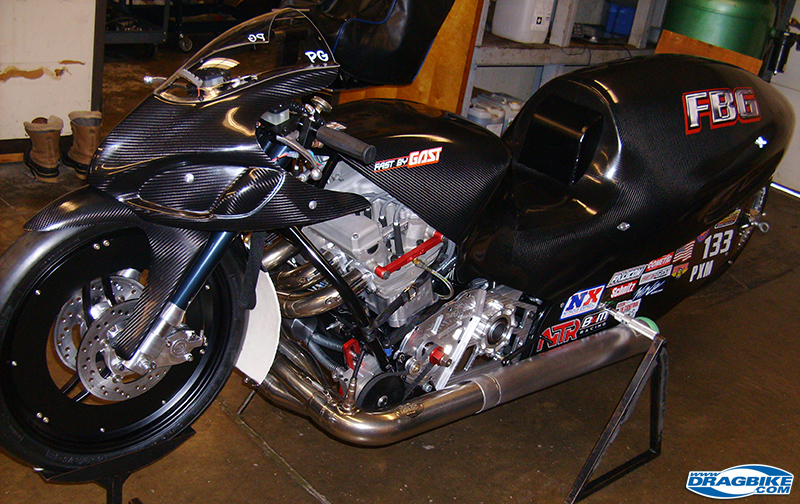 Over the coming weeks, the arduous and painstaking task of transforming a bare rolling chassis into a race ready Pro Mod contender began to take shape. Although unable to test due to there (still) being snow on the ground in upstate New York as well as the massive work load at FBG, Paul is extremely confident that his brand new machine will perform right out of the box. Like McBride, Gast can not wait to get to the renowned SGMP facility. Having very lofty goals right out of the gate, Paul believes he can lay down a sub four second quarter mile to start the season! Buoyed by the awesome conditions expected as well as the billiard table like SGMP racing surface, Paul hopes to make the memories of the “Red Bike” even more distant!

Without having to scramble thru the off-season to build a new bike begs a very scary question; What is the DME brain trust capable of next? Comprised of team owner Dimey Eddinger, Dragbike.com Tuner of the Year award winner Andy Sawyer and engine builder extraordinaire Skip Gladstone, there is literally no telling what barrier they will smash next. Also participating in the February test session with McBride at OSW, Team DME no doubt tested out some cutting edge stuff in the absence of peering competitor’s eyes. You know multi-time APE Pro Street champion rider Joey Gladstone and teammate Terence Angela will be bringing their A game this weekend. 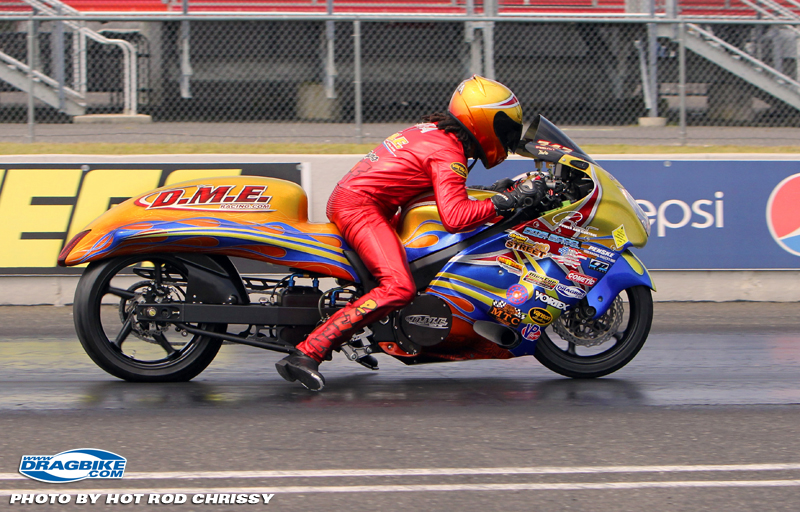 All three teams, and numerous others, plan to get a jump start on the event as well as the season by participating in Thursday’s Open Test Session being put on by the ManCup.

The weekends stellar forecast calls for cool crisp conditions that will feature low humidity, a high barometer and sunny days. This translates in to what racers refer to as MINESHAFT conditions. Records are sure to tumble as a result. On top of the incredible weather forecast Mother Nature is providing, SGMP Principal Ozzy Moya is leaving no stone unturned to assure his facility is up for the task. None other than Operations Manager of the entire DCOM Motorsports empire operation Wade Rich will be there to oversee the crack SGMP staff. Wade will be bringing his 25 years of keen track preparation skills to satisfy the racers pouring in to SGMP . Wade and crew will be sure to have the racing surface in tip-top shape and able to take everything – and anything, that the racers are willing to throw at it! Ironically, the last time that Wade was “on the tractor” at SGMP? None other than the 2008 Dragbike World Finals when Spiderman ran his 5.74 career best. WOW!

Take your pick. Larry McBride debuting his brand new Fueler. The possibility of Sixties in Pingel Top Fuel. A three second pass in Falicon Pro Mod. APE Pro Street bikes hitting 220mph on a street tire with no wheelie bar. One thing is for sure, this is certainly an event you will not want to miss! The Exoticycle / Roaring Toys Spring Cup is poised to be an event you will want to remember being there in person and seeing the history unfold as it happens right before your very eyes!

[spacer color=”336699″ icon=”fa-trophy” style=”1″]
About Man Cup Motorcycle Drag Racing : Headquartered in Safety Harbor, Florida, the Man Cup promotes motorcycle drag racing on a national event basis for professional, sportsman and ET bracket racers alike and is open to riders of all skill and experience levels. The Man Cup Series is North America’s only national event style motorcycle drag racing series comprised of events throughout the eastern half of the United States. For marketing opportunities with the ManCup as well as more information on ManCup Motorcycle Drag Racing, please visit www.mancup.info on the web or 727-742-5245 voice/text