Sunday morning greeted races with blue skies and moderate temps to begin the day of eliminations for the 39th annual Fast by Gast Nationals at Dragway 42, in West Salem, Ohio. Ron Matcham and his crew from D-42 had the track on point and we went hot right at 9AM on time. By 9:06 we had motorcycles going down the race track.

Racing began with the three ET classes going rounds back-to-back with Liska Racing Street ET leading the way, followed by MPS Pro-ET and Vance & Hines Race Shop V-Twin racing. Once the first two rounds of ET were in the books, at 10:30, right on schedule, all the #1 qualifiers were called out for recognition.

Pastor Don Dowling rendered the invocation at 10:55, the national anthem was played and at exactly 11:AM the Dennis Bradley Top Fuel motorcycle team fired up the thundering T/F bike with Mitch Brown at the controls. Mitch was the only T/F motorcycle in competition this race and he delivered a 6.63 @ 178.43 MPH pass that really held solid gold for the Dennis Bradley team.

For the first time the bike logged in a 1.04 sixty-foot time, coupled with a 4.00 1/8th mile elapsed time at 195 MPH, which if the numbers were extrapolated out, may well indicate the bike was on a solid 6-0, if not it’s first five-second ET. In as much as there was only one T/F bike, at 1:45 in the afternoon, the team made a second similar exhibition pass with great results.

In Hawaya Racing Pro Fuel competition, Rocky Jackson defeated Jim Martin 7.72 to 776 as both bikes drifted about during their runs and both drivers had to muscle the bikes to keep them in the groove. It was a great driving job by both racers and the provided excellent side-by-side action for the spectators with wheels up.

In JE Pro Mod: Title sponsor of the Fast by Gast Nationals, Mr. Paul Gast, took on all comers and he not only qualified #1, but ran the table on the class and won in the final round by defeating Ashley Owens with an elapsed time of 4.01 to Ashley’s 4.35, which was preceded by a red-eye, for the victory in P/M.

In Nitrous Express Pro Open: Rob Garcia was the man to beat going quicker/faster each pass, but he broke and could not make the call in the finals to race Shane Eperjesi, who was also showing significant improvement with each pass. In the semi-final round, Rob mortally wounded his motor and just could not make repairs. It would have been a real dog-fight if they were able to match up in the final, but such was not to be. Shane Eperjesi, soloed to victory in the final round of NX-P/O with a stellar 6.20 @ 222.77 MPH with his best pass of the weekend. 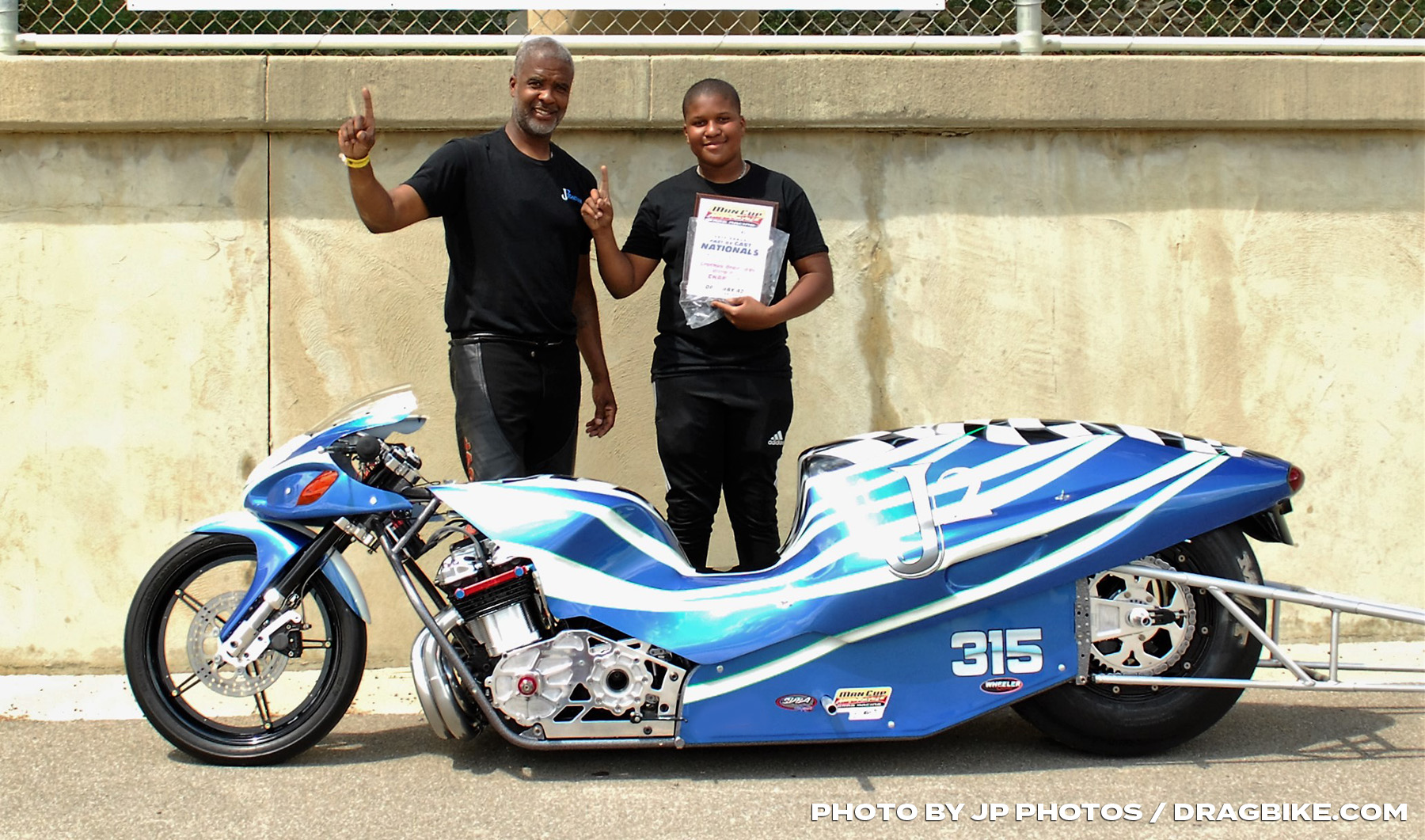 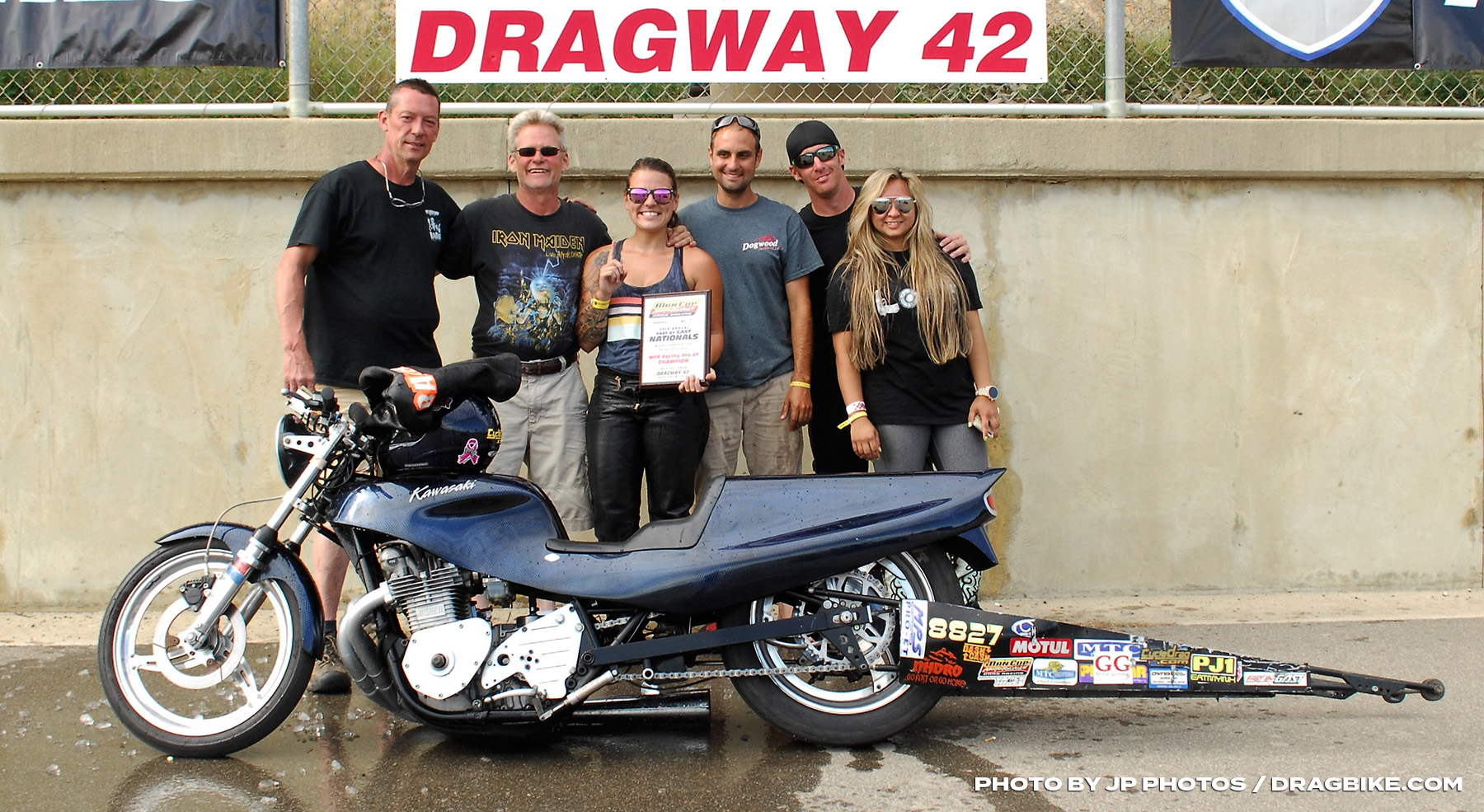 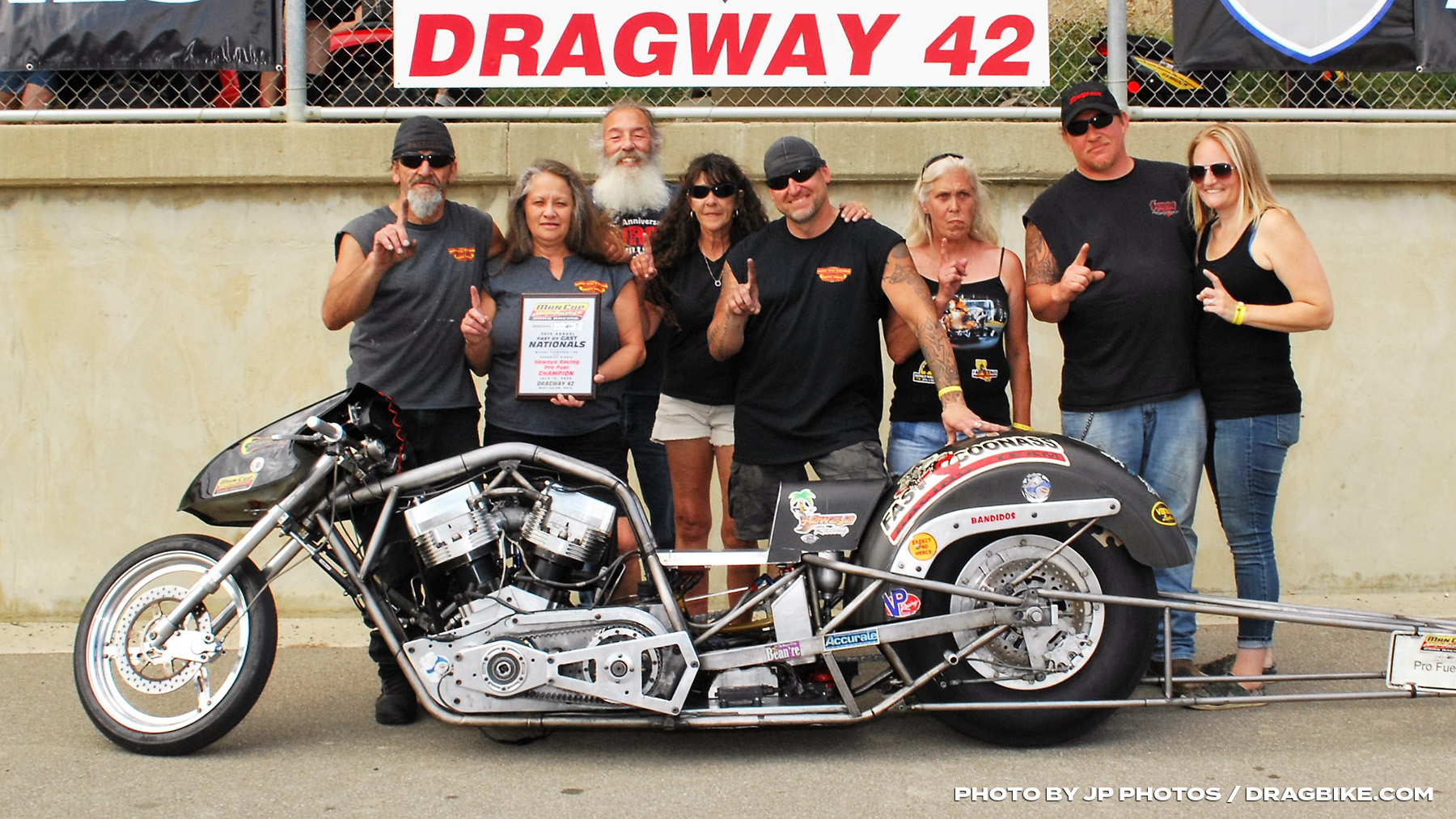 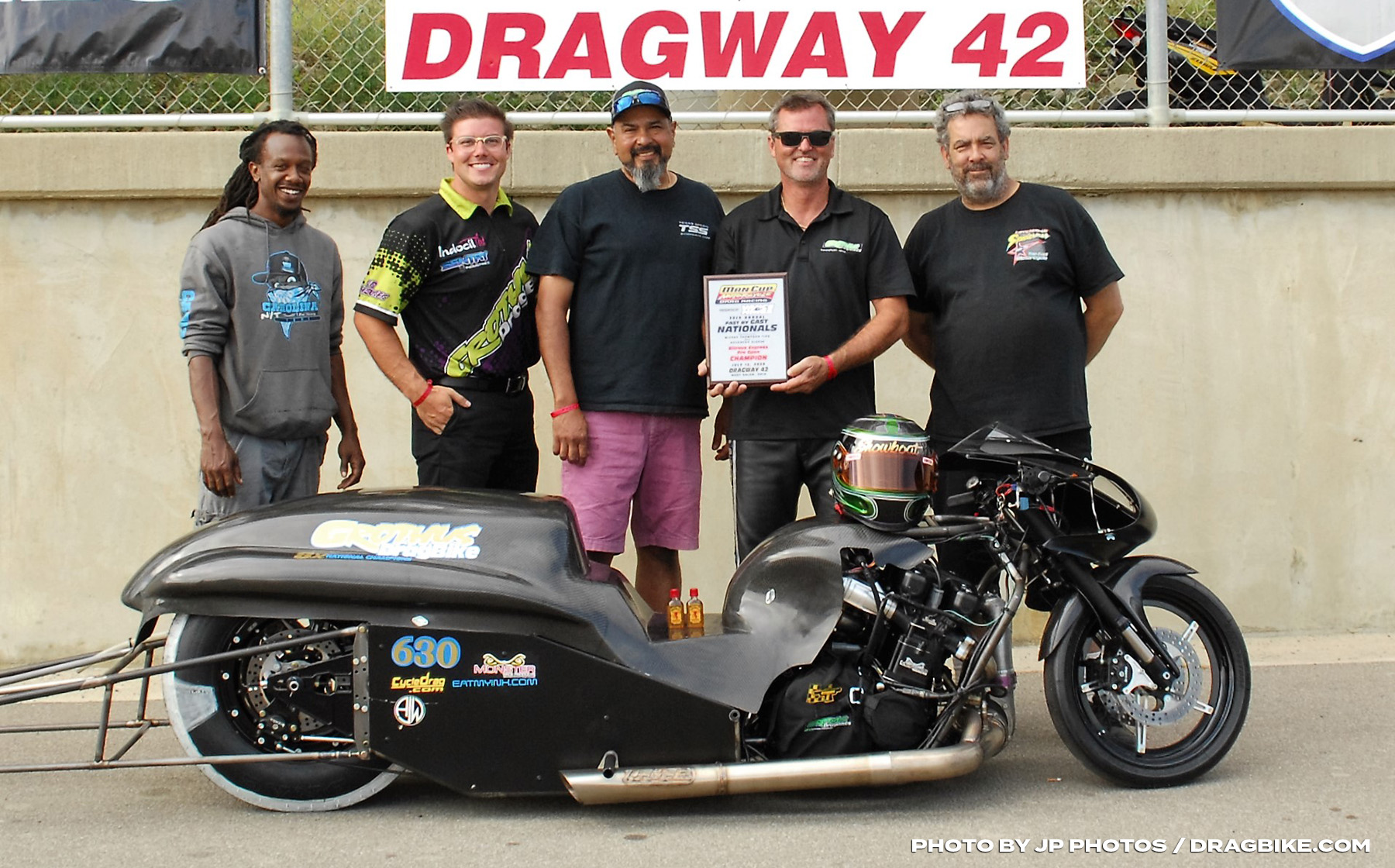 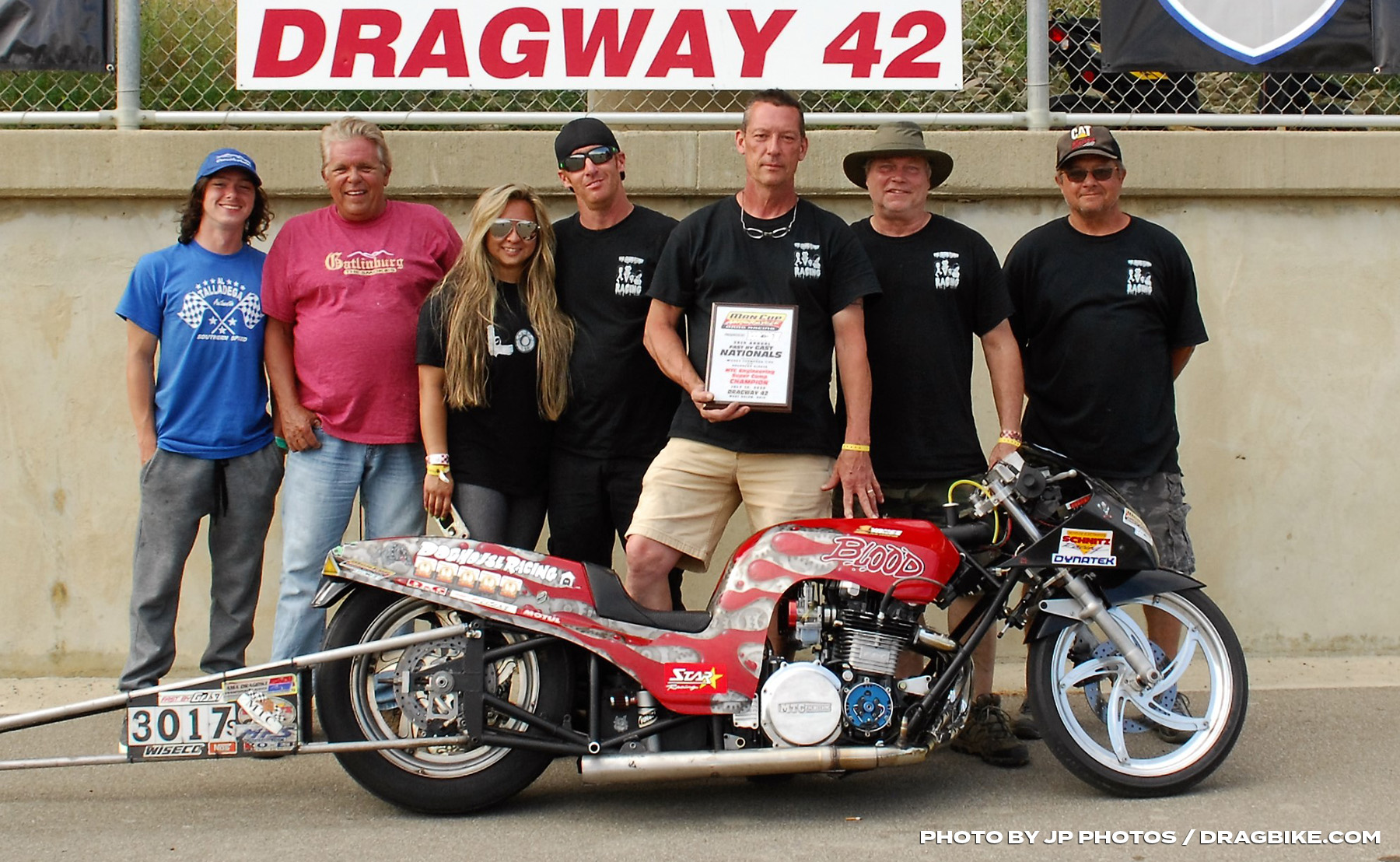 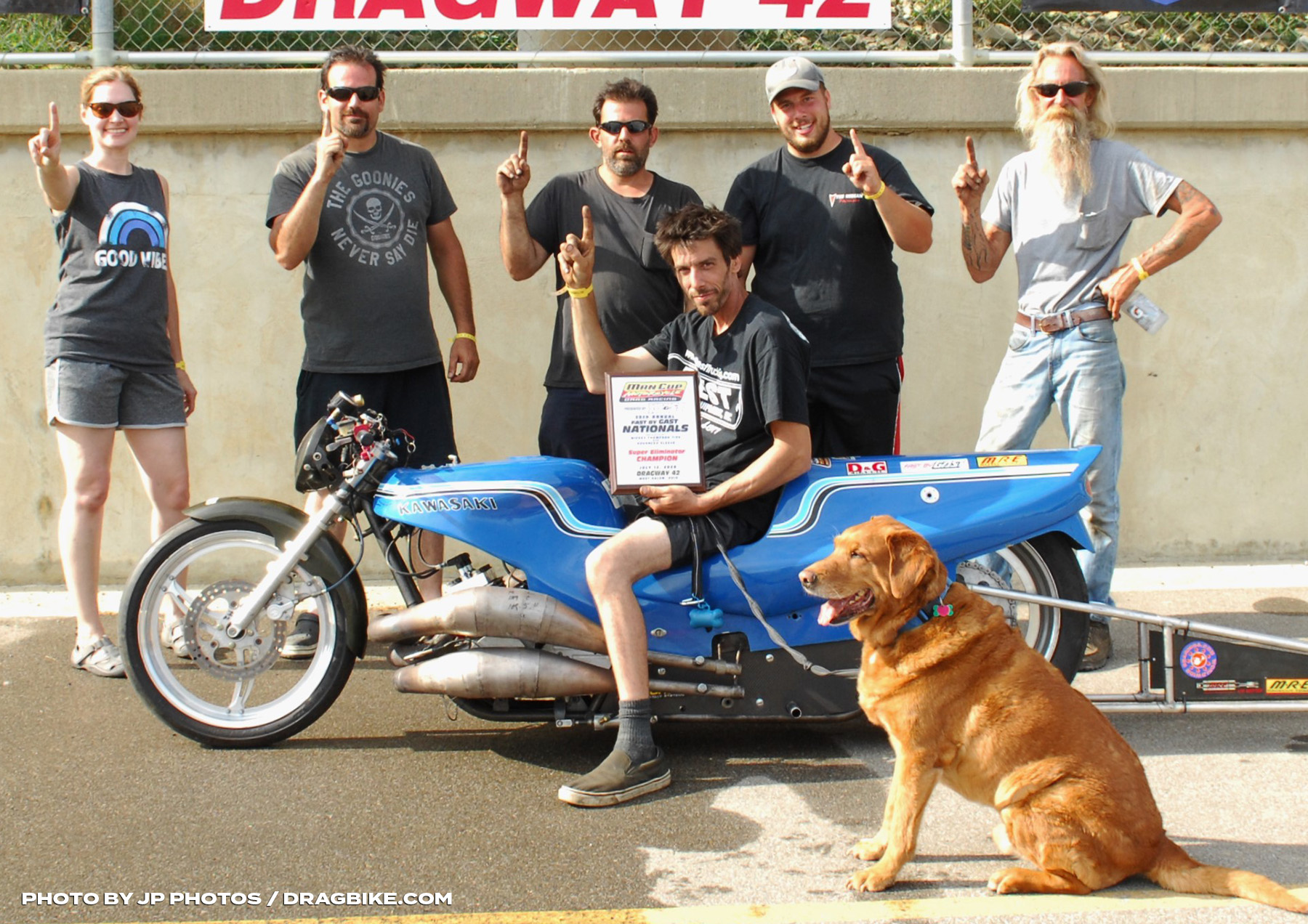 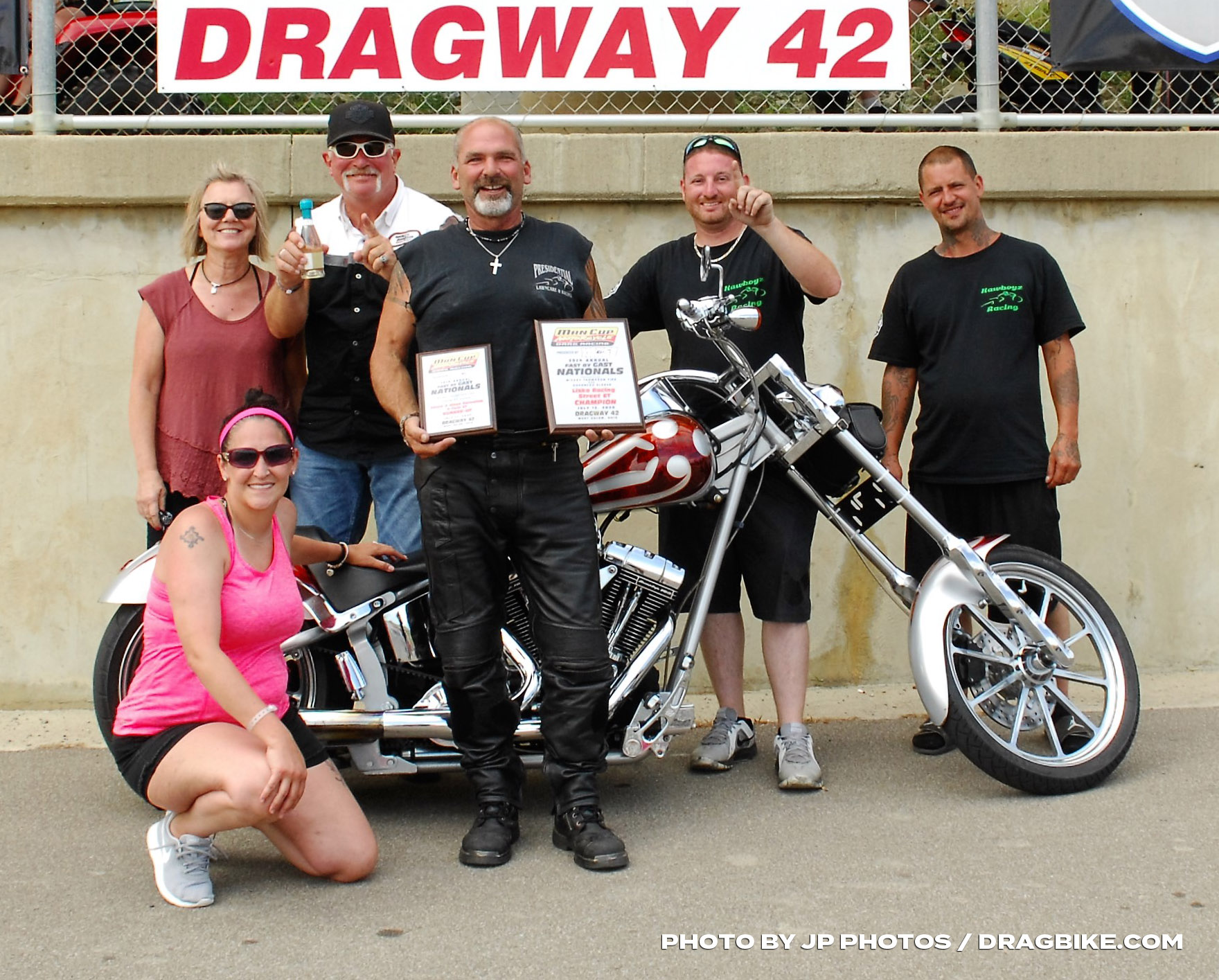 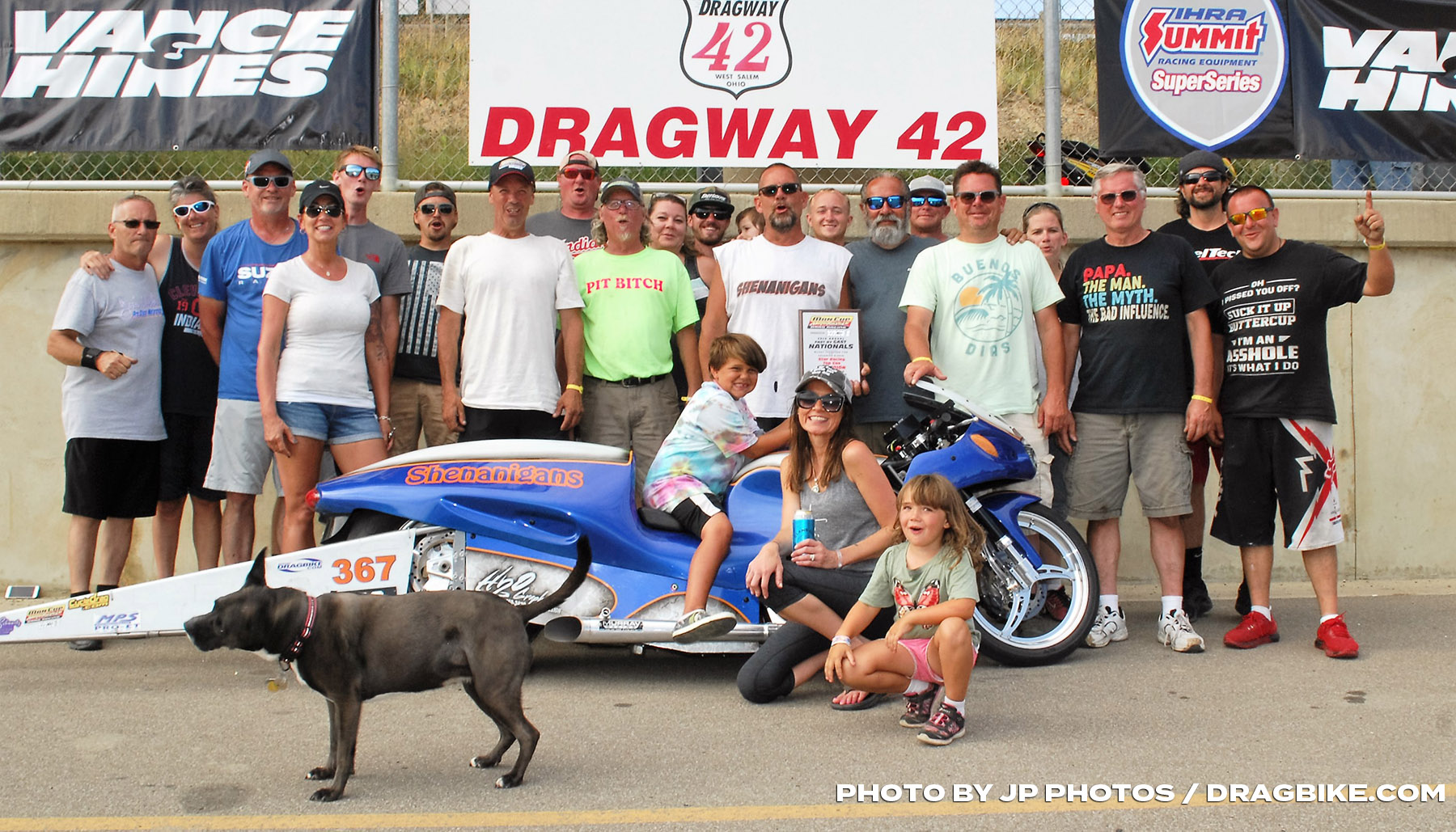 The morning started with a drizzle, but the skies burst open with bright sunshine at 9:30am. Track drying operations began in advance of the sunshine with the D-42 staff out on the race surface by 8AM, fighting back the morning mist.

Liska Racing Street ET began the racing program on Saturday, followed by MPS Pro ET and the Vance & Hines Race Shop V-Twin class. These three classes were run round-Robin to begin the day and paved they way for Pro Qualifying Q-2 at 1:45PM. 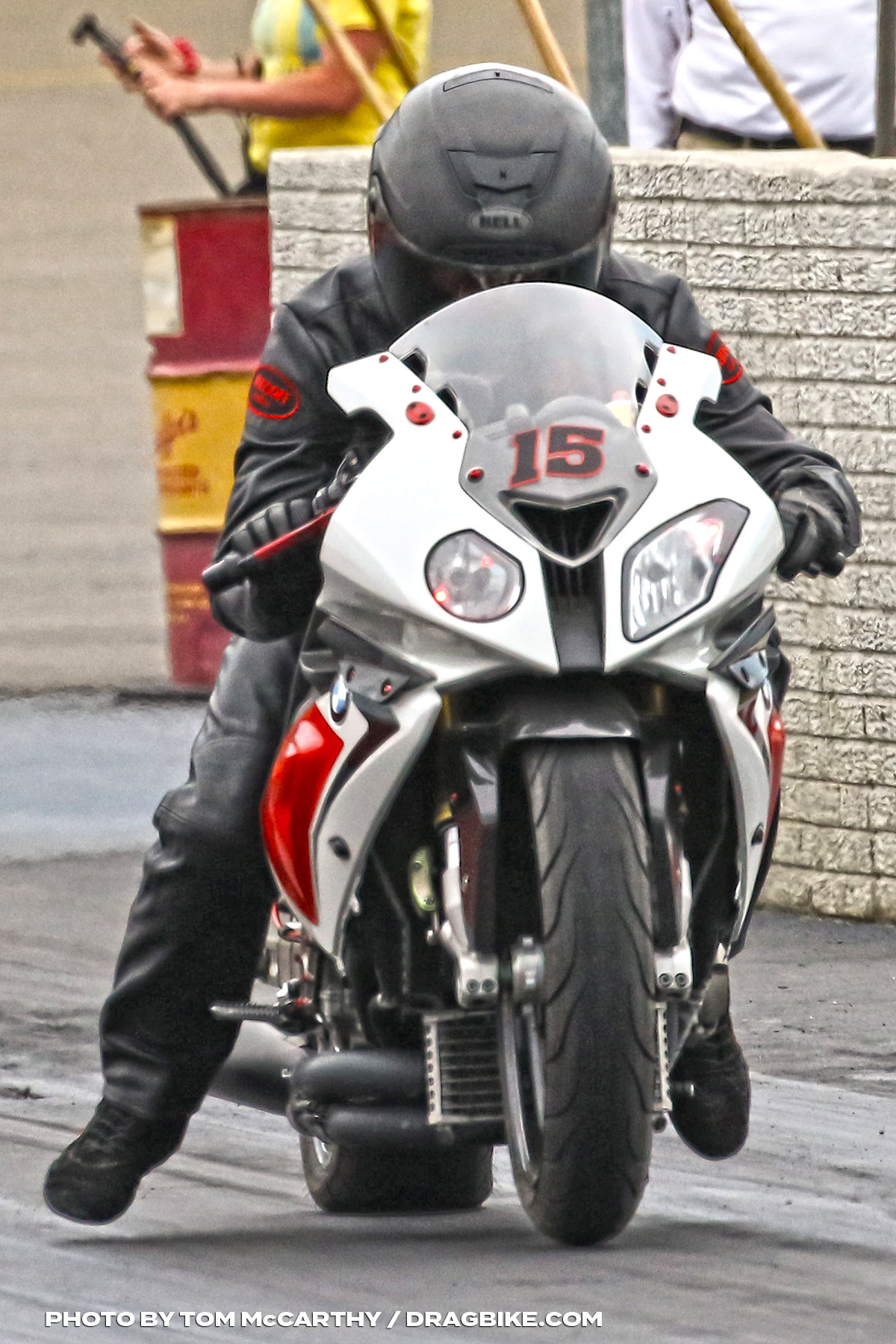 PRO Q-2 Results and Notes: Top Fuel motorcycle led off the pro-show, with Mitch Brown piloting the Dennis Bradley TF/MC and they clocked in with a 7.09 @ 152 MPH to start things off. 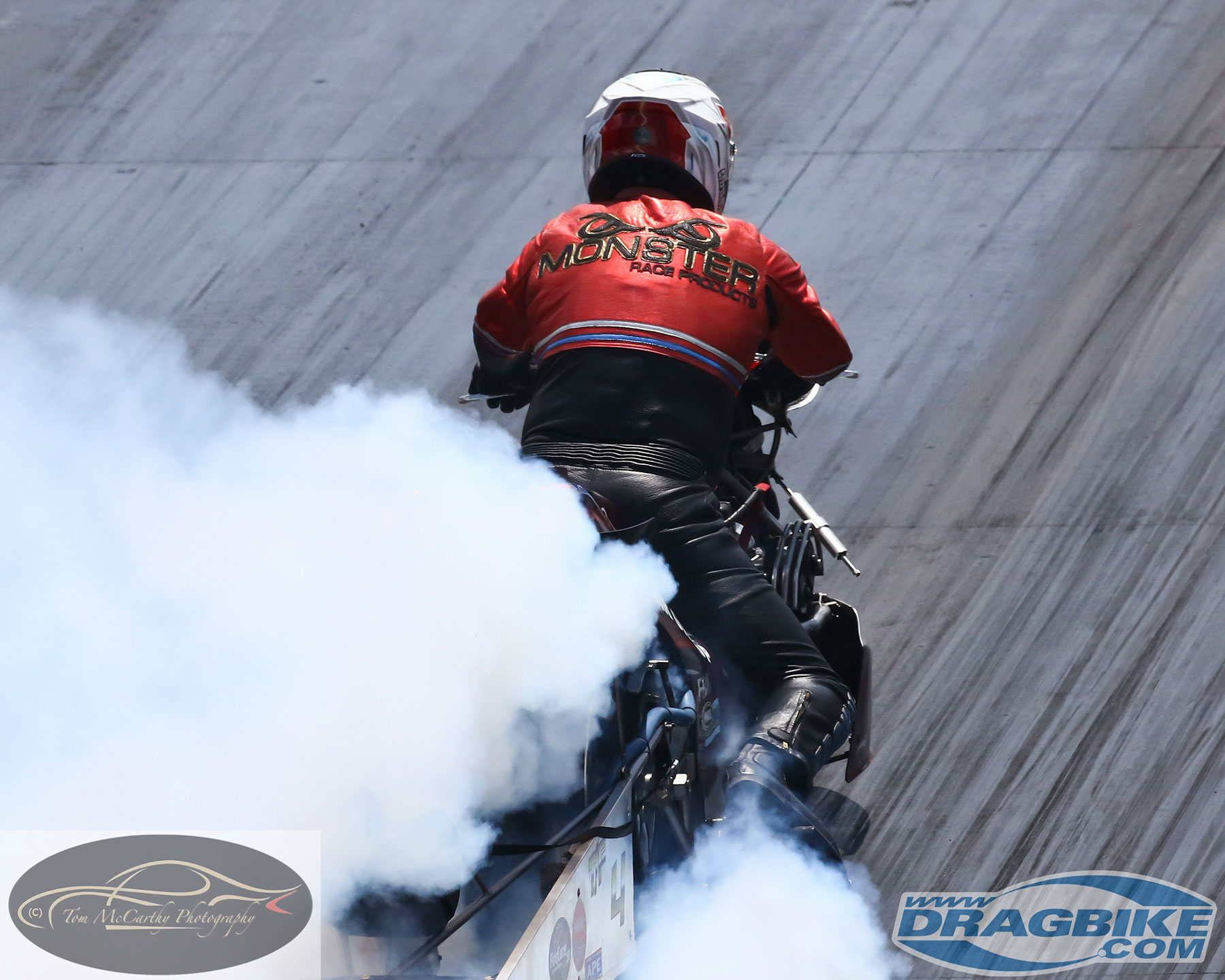 When the Hawaya Racing Pro Fuel bikes were called to the lanes, this qualifying round was led off by Sam White and Walter Halonski who recorded 7.75 and 8.50 elapsed times as the first side-by-side pair out of the gate. Low qualifier for this Q-2 session was Jim Martin who posted a 7.71 to Rocky Jackson’s 7.77, to lead the pack after two of three qualifying sessions.

JE Pro Mod bikes then took to the track next, with Jeff House bettering his previous round 4.09 with an improved 4.07, to hang on to his #1 spot through two rounds of qualifying

The Nitrous Express Pro Open bikes continued to fly here at the FBG Nationals, with Shane Eperjesi stepping up by posting a stout 6.27 @ 215 MPH, to take the top slot after Q-2 (of 3). 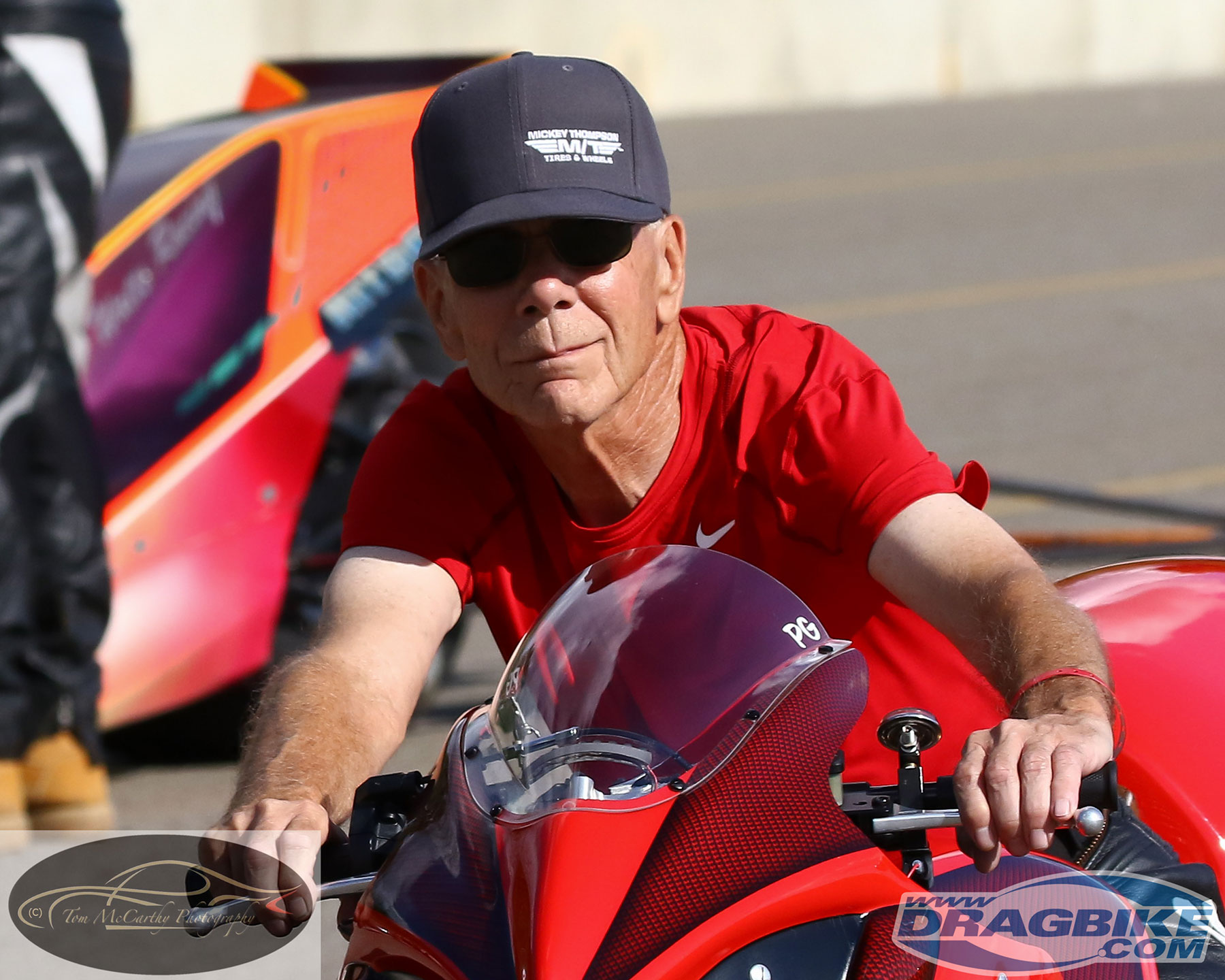 The sportsman racers of Grothus Ultra 4.60, MTC S/C, Super Eliminator, Wiseco Street Fighter and Star Power Top Gas then took to the track and began their Q-2 efforts. Racers running closest to the Index number for the respective class determine the #1 qualifying position for that class.

The Saturday winners in the ET classes: 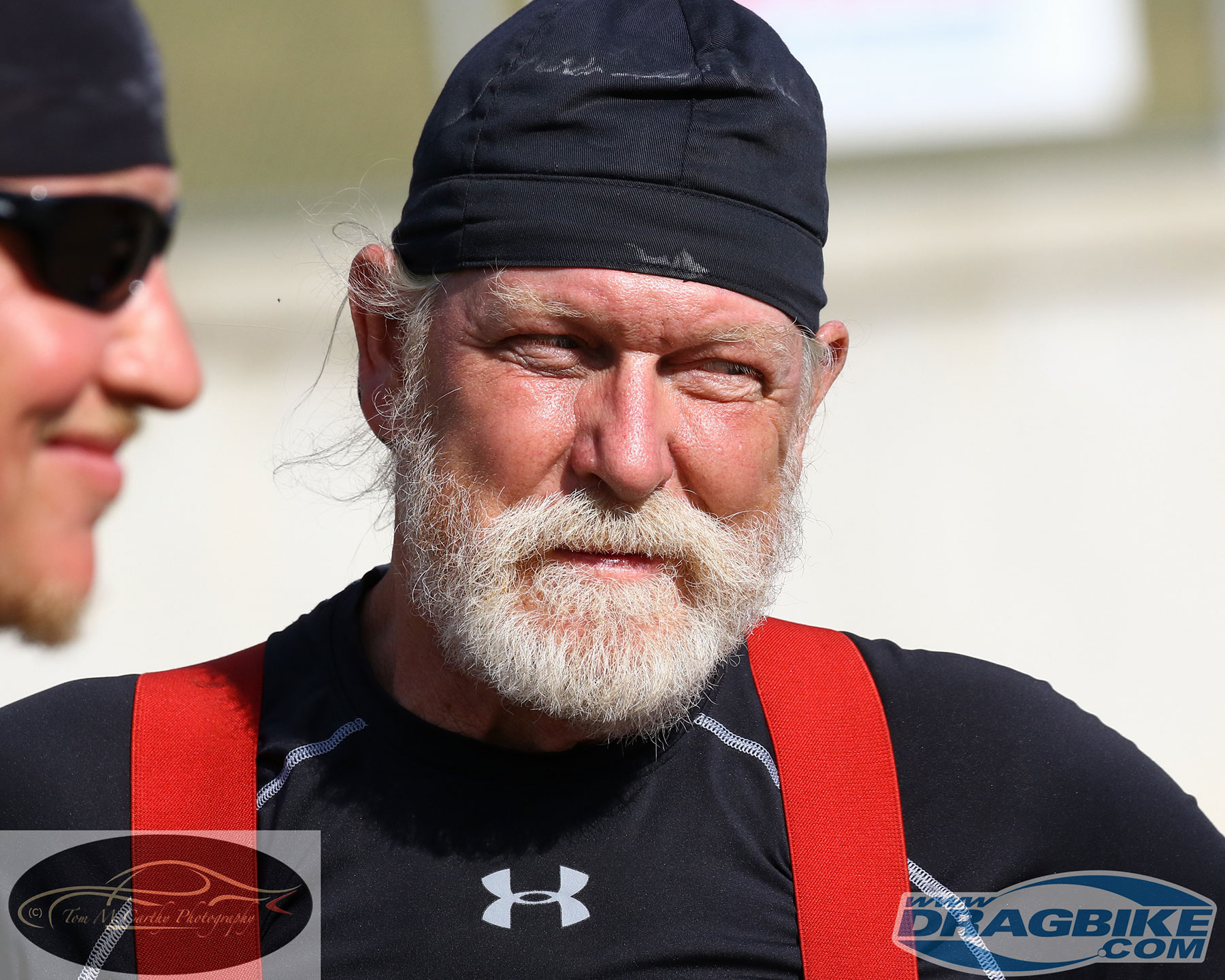 At the 39th Annual Fast By Gast Nationals, presented by Mickey Thompson Tires & Advanced Sleeve, at Dragway 42, in West Salem, Ohio, it turned out to be a hot a wild weekend for racers who make up the Man Cup faithful. Drag bike racers began loading into the pits on Thursday evening as the Man Cup event staff made all stations ready to receive racers on Friday morning.

Drag bike pilots from Texas to Boston began filling up the pits at 7AM Friday as the first race of 2020 unfolded for the Man Cup motorcycle drag racing sanction. Friday, just like the day before it, was a hot one with temps peaking near 90 degrees/f. Everyone was encouraged to hydrate often and water was readily available for all attending. 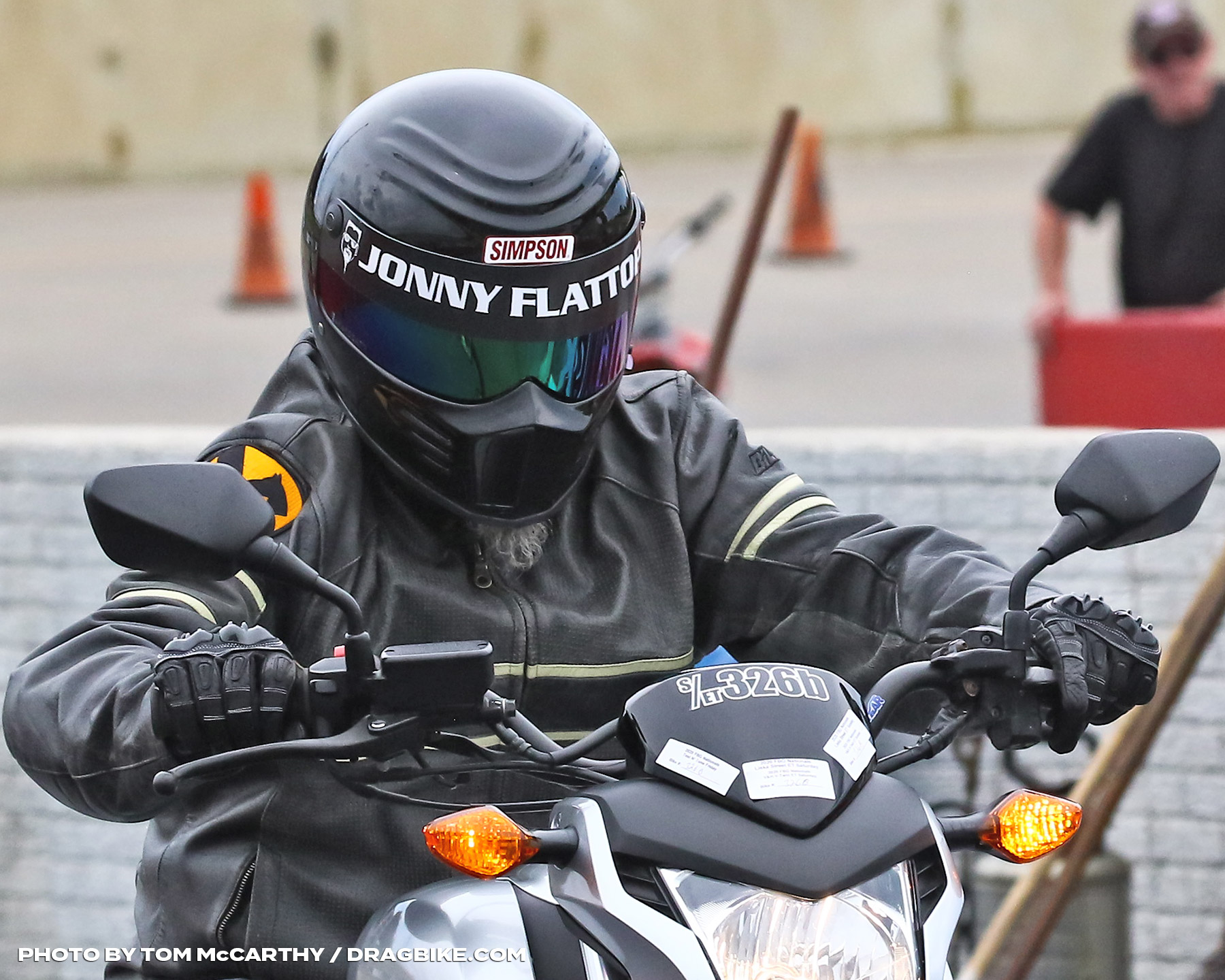 Sportsman and ET racers began the Friday test & tune at 10AM and from that time till 4:30 the Friday test session was well attended. Every drag bike racer who got in on the session was able to get in as many runs as they wanted from 10AM to 4:30 PM.

Various bikes from all the classes across the spectrum of drag bikes participated in the Friday session. Many pro class bikes from JE Pro Mod and Nitrous Express Pro Open made multiple passes. Shane Eperjesi, at 2:30 in the afternoon, during the heat of the day recorded a 6.44 @ 213.68 test pass that was just stellar. Mark Rendeluk also clocked in with a 6.57 at 202 MPH. 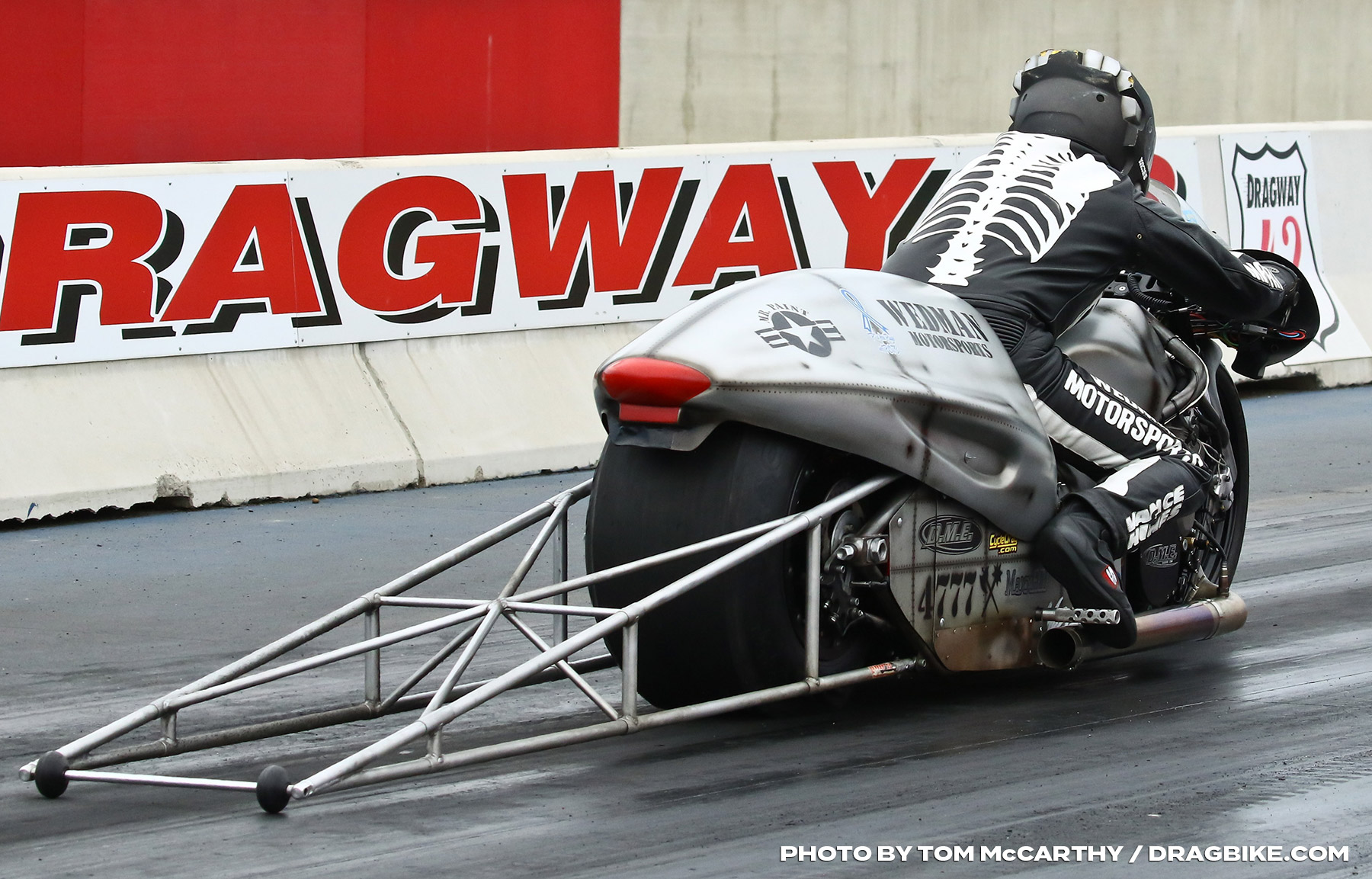 At 3:02PM, the first weather event of the weekend came to life and the sky, starting on the top end of the race track, just opened up, beginning on the top end of the race track. As the deluge just poured out of no where, it was amazing to watch the rain make it’s way down the track from the top-end to the starting line where it was still dry. Racers in the lanes were quick to return to their pits and take refuge. 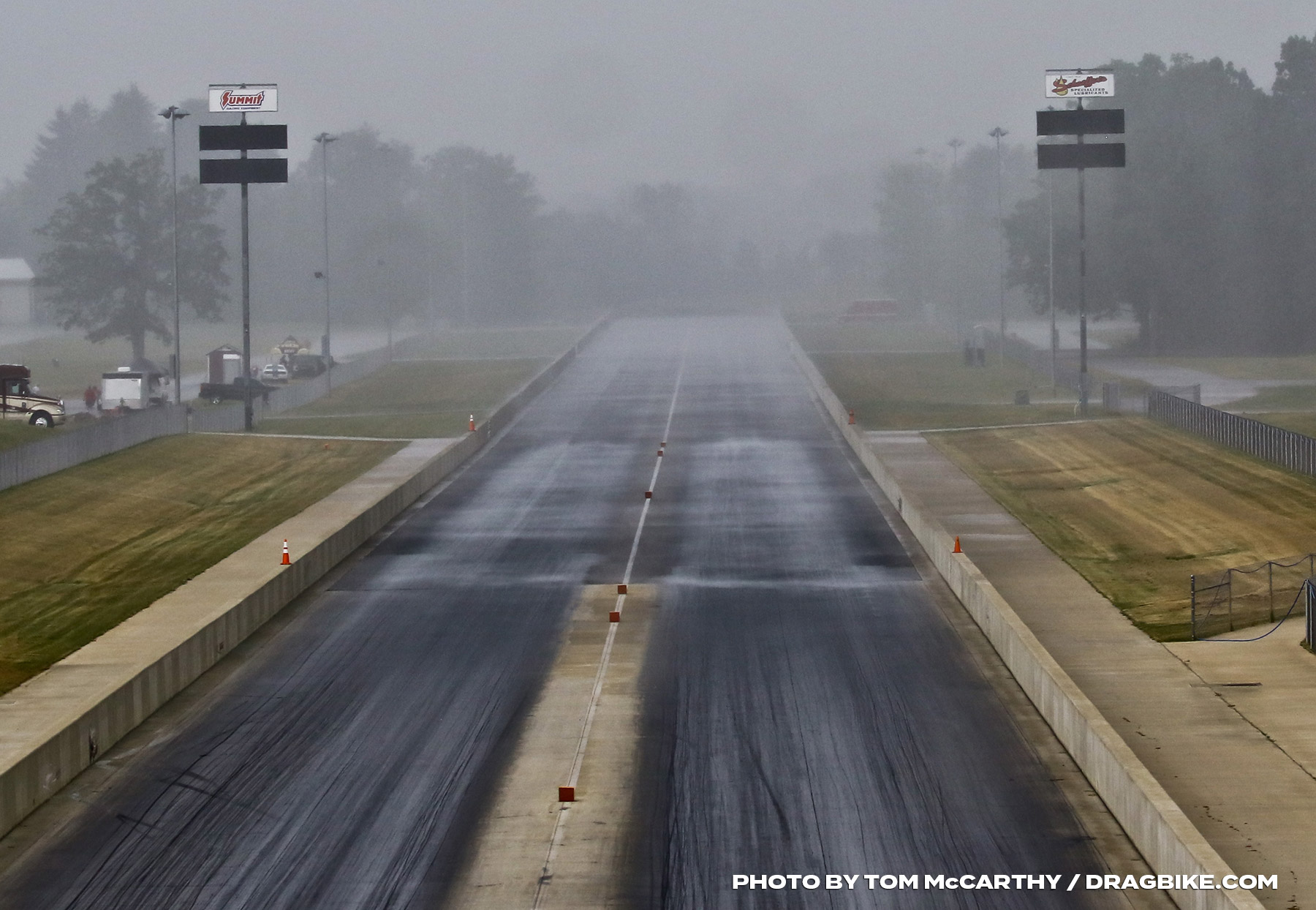 The track staff, led by owner Ron Matcham began water clearing efforts before the rain fully stopped and by 4:40 they actually had the track more than 90% dry. So at 4:45 the word was put out that Q-1 would begin at 5:30, only ½ hour off the scheduled run time.

At 5:37 PM, the call went out for the professional bikes to enter the staging lanes. The evening qualifying session was led by Nitrous Express Pro Open class.  The #1 qualifier for the session was Rob Garcia, of Texas, who posted a fine 6.32 for an elapsed time. The P/O bikes were then followed by JE Pro Modified. Mr. Jeff House of Texas was the #1 qualifier for the Pro Mod’s with an excellent 4.09 to list him in the top spot on Friday night. 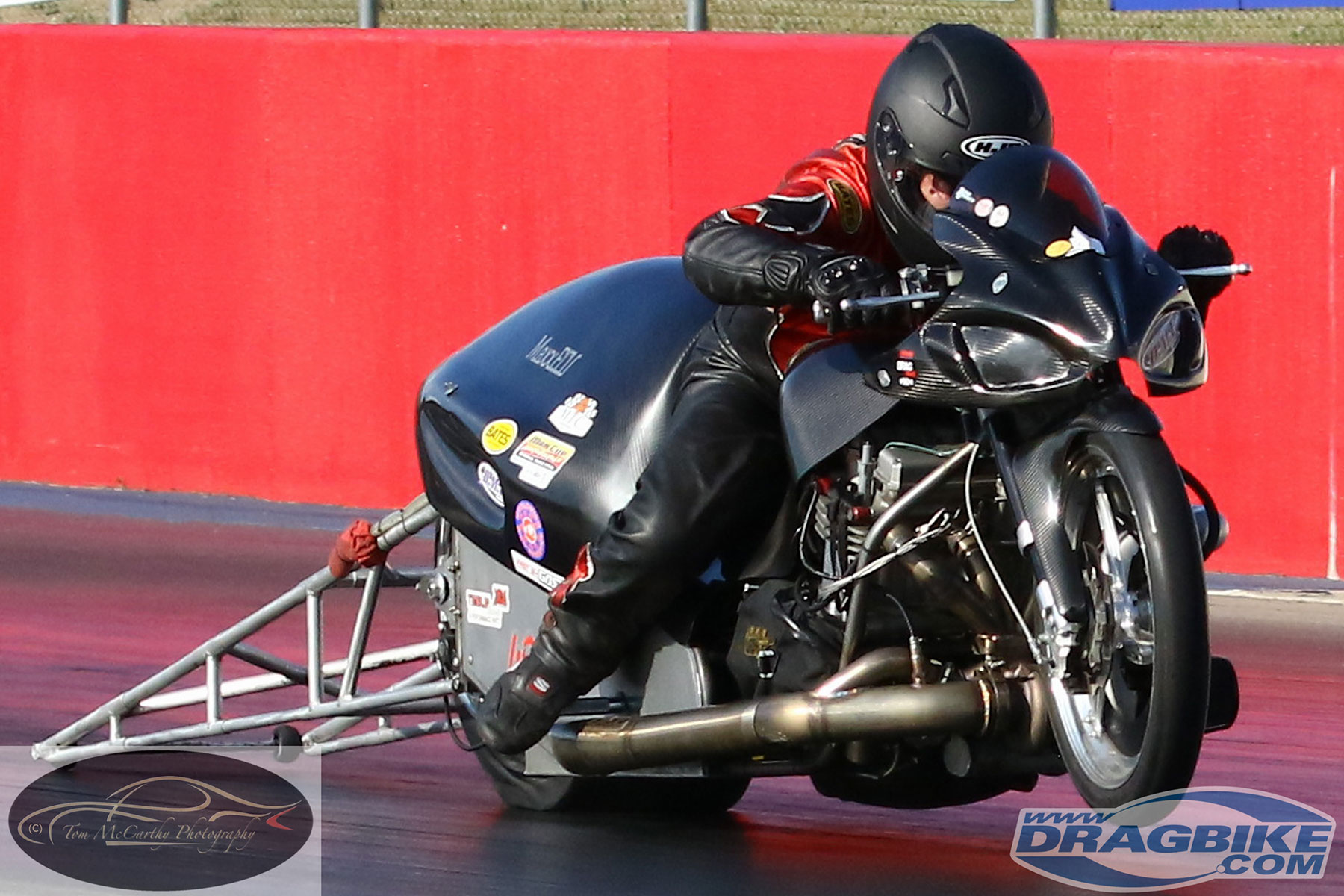 The nitromethane burning class of Hawaya Pro Fuel closed out the evening qualifying session for the pro bikes. Rocky Jackson of Louisiana posted an 8.71 elapsed time to Walter Halonski’s troubled 9.06 effort. Walter Halonski is in the hot seat for Man Cup events this year as Preston Bartlett will be racing with the other sanctions after winning three consecutive Man Cup titles.

Following the professional classes the sportsman qualifiers were interrupted by a brief shower, which did put a damper on things briefly, but within 20 minutes the bikes were back in the lanes to close out sportsman Q-1.

The Saturday qualifying will begin with Liska Racing Street ET at 9am, followed by MPS Pro ET and Vance & Hines Race Shop V-Twin racing. Q-2 is slated for 1:30PM. 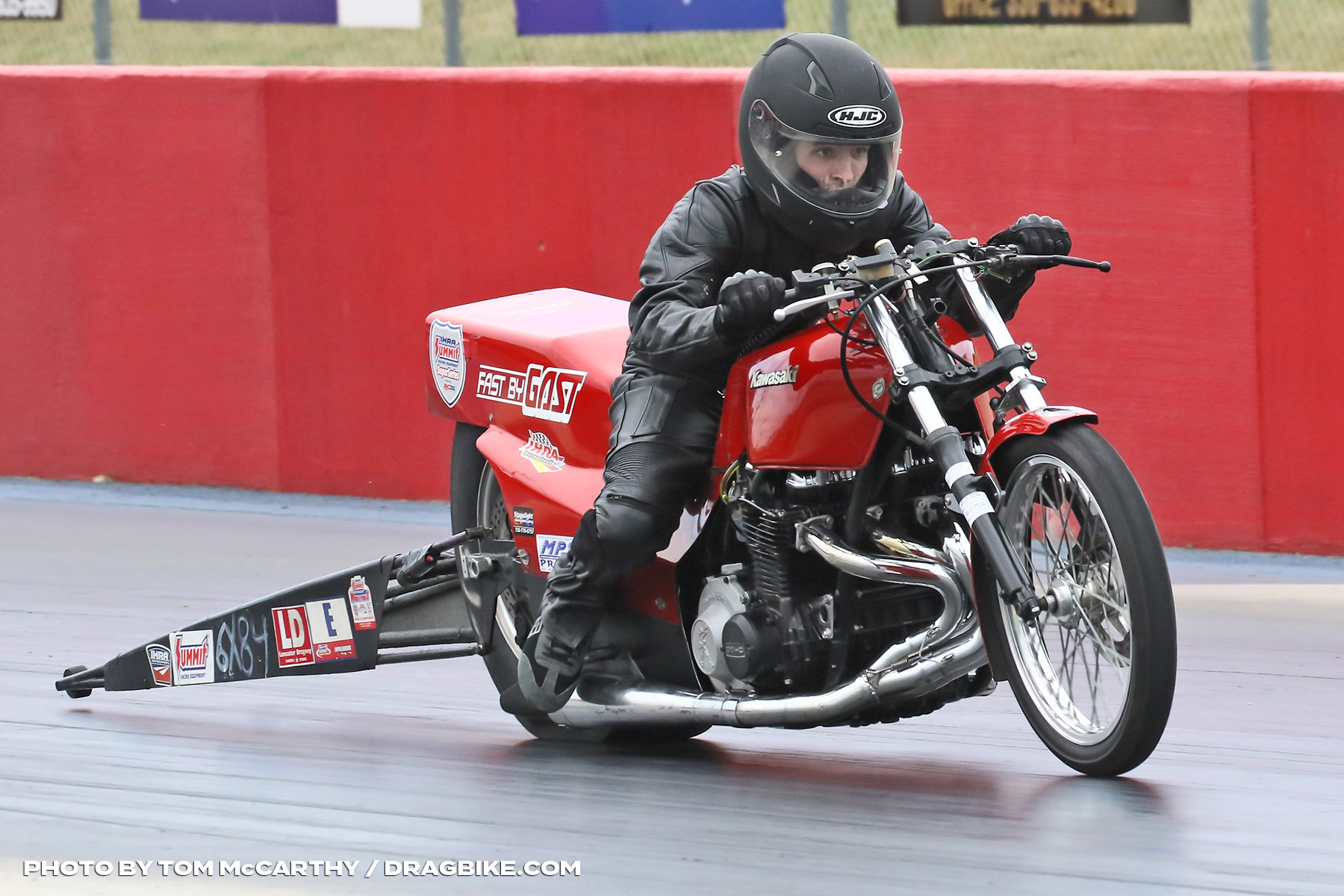