The 2012 Manufacturers Cup championship chase kicked off this past weekend at South Georgia Motorsports Park with just shy of 500 entries, a record for the Spring event, in attendance. The teams and vendors that turned out were blessed with fantastic weather for the entire event.

The Cup would like to congratulate all the event finalists.

Sincere thanks go out to all who helped make the event the huge success it was;

Cup staff of Rich and Larry at registration along with Kevin at the gate, tech director Phil Davis, the lively “Hill” and Bill Hahn on the PA

Doug Ray from DragbikeLive.com and Gary Larsen from Stripbike.com for the great race coverage along with Chaplin Don Dowling

The Cup moves up to the Midwest for event number two of the 2012 three race series. Indianapolis will come to life August 17,18,19 when the Cup, in conjunction with NHRDO, expect some 500 entries vying for the coveted event titles and valuable points towards the class championships of both NHDRO and the Cup series.

The Manufacturers Cup Motorcycle Drag Racing Series is dedicated to providing the Professional, the Sportsman and the ET Bracket Racer access to the very best facilities. Cup events consistently feature the largest fields in the sport of motorcycle drag racing. Top Fuel is our premier class, where we showcase 5 second, 250 mph action! The quickest side by side Top Fuel passes in history have been run, you guessed it, at a Cup event. With three events on the 2012 schedule, a points earning program has been put in place and the Cup Series will crown it’s first ever series champions in all classes come November.

For more information visit us at www.manufacturerscup.info or check us out on Facebook. 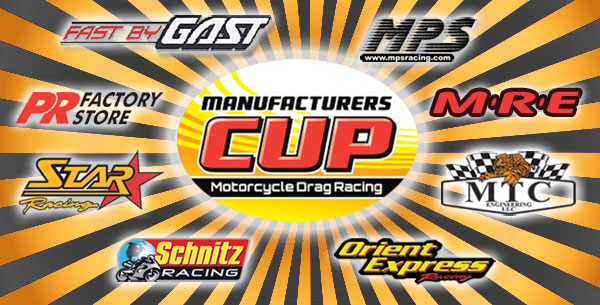