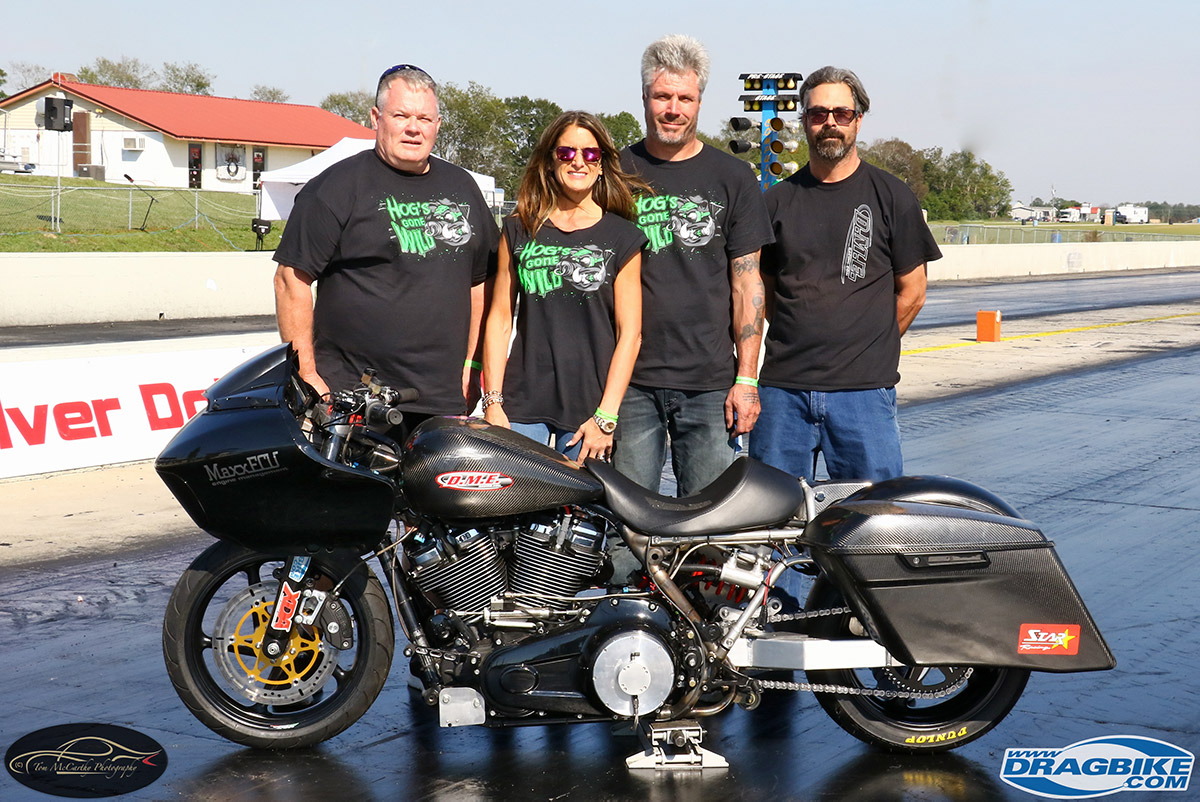 Words and photos by Tom McCarthy

At the conclusion of the 2020 Hog’s Gone Wild season, 45-year-old Marc Fricke of Chicago won the Hot Street Championship. Marc’s first national championship with the Hog’s Gone Wild sanction was hard-fought and well earned. Fricke outdistanced Jason Broski in a year-long battle, winning the title by just one point, 461 to 460. “Jason and I had our differences during the 2020 season, but he was a great competitor, and we had to work HARD to beat him for the #1 plate” Marc commented as the season came to a close. 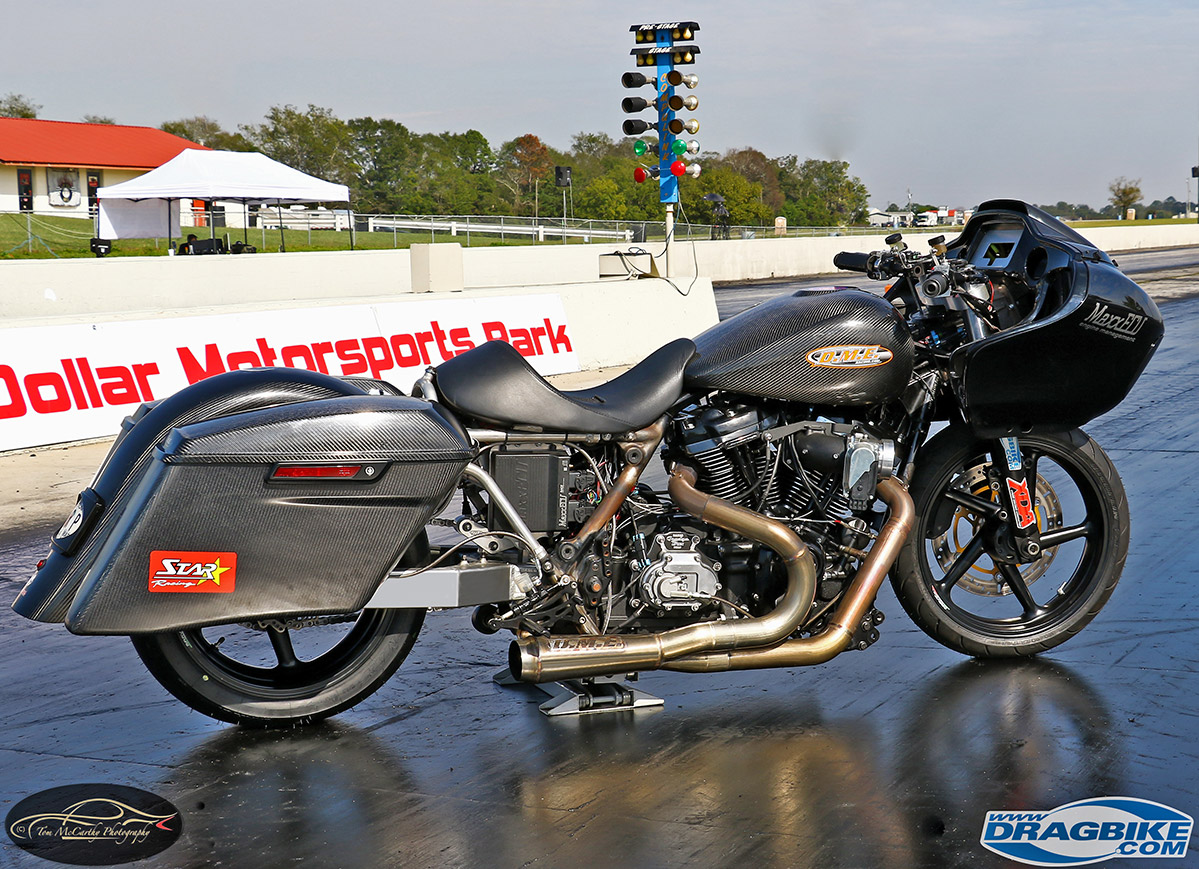 Hot Street bikes are a handful. No wheelie bars, big baggers, low 9’s knocking on the eight-second elapsed time door, things can get very exciting, very quickly out on the race track. A high horsepower Harley-Davidson V-Twin is not an inexpensive motorcycle to go drag race. There is over 50k invested into Marc’s championship-winning machine.

The bike is a 2018 HD Road King, which by the rules sports a 66″ wheelbase via a DME Racing swingarm. Its race-ready weight is 515 pounds with 3.5 inches of ground clearance rolling on Marvic Magnesium wheels and a Dunlop rear tire is a 190/80×17. 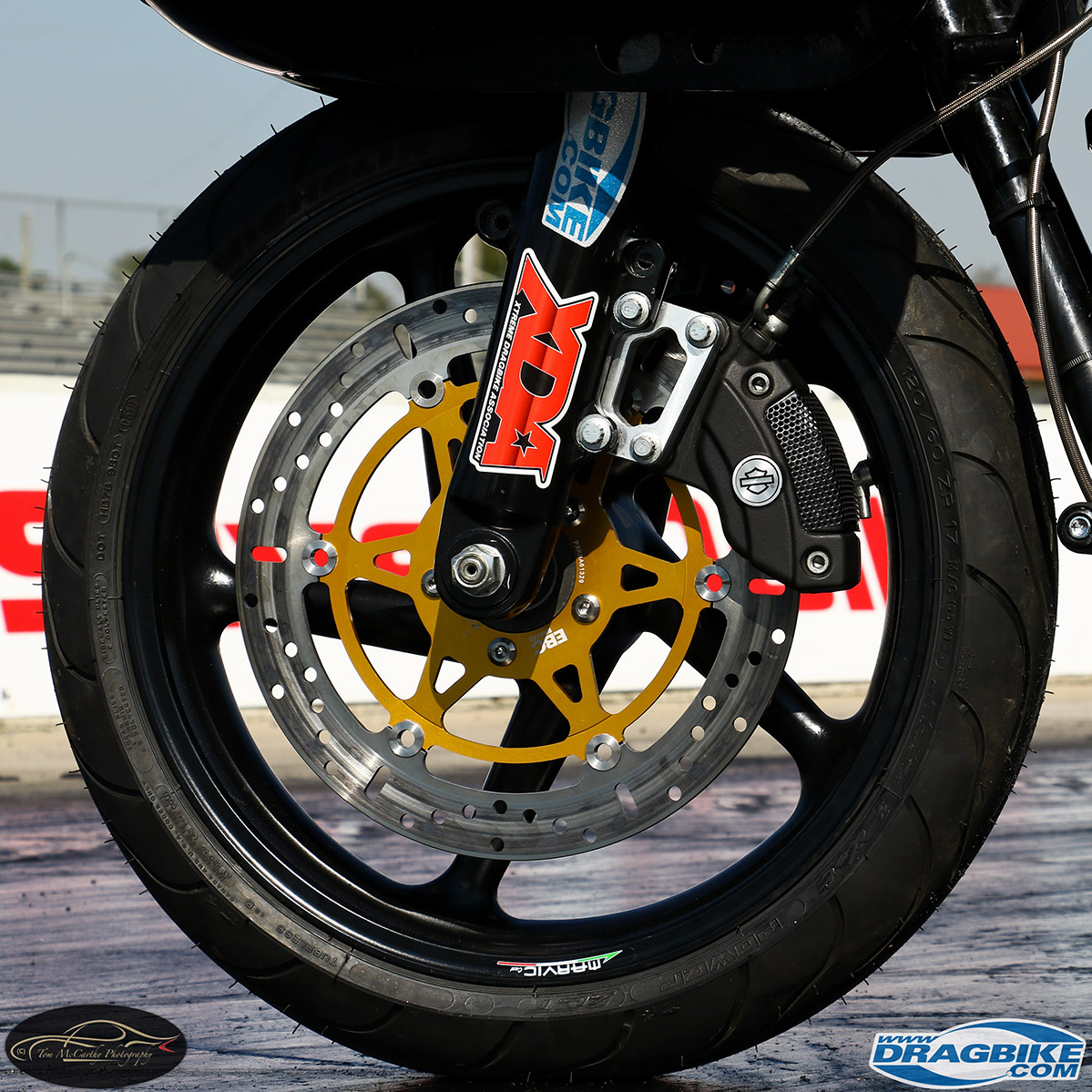 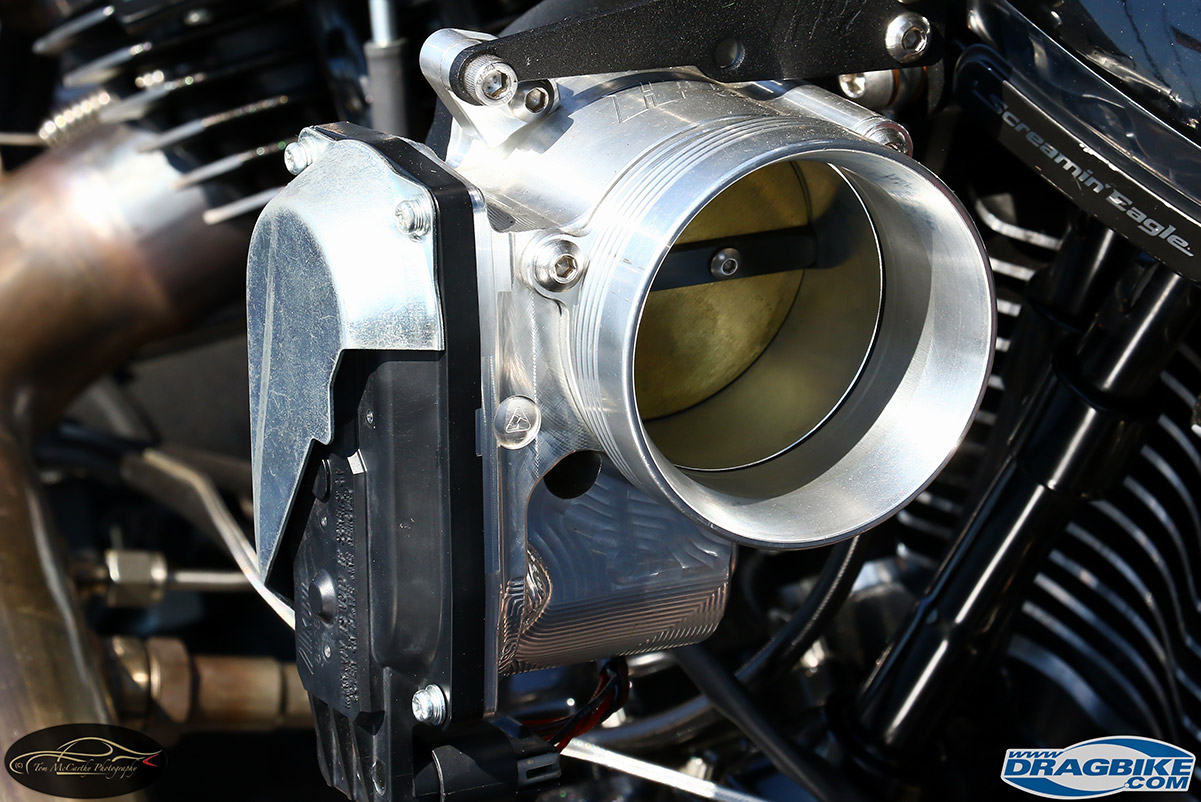 Fricke’s Road King is equipped with numerous DME Racing components, but their custom exhaust system really tunes up the horsepower output unlike any on the shelf system. 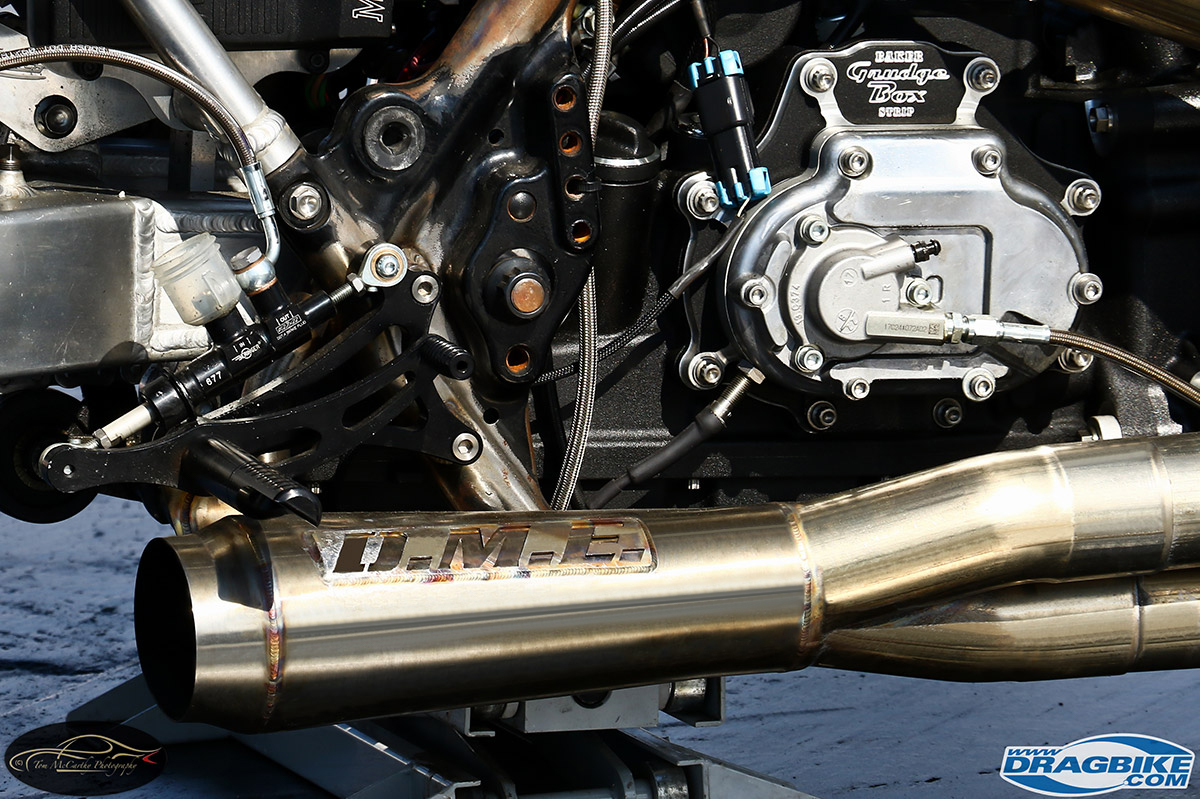 The fuel system and ignition are managed via a MaxxECU system set up by the talented Steve Nichols. Liquid nutrition for the bike is VP-M1, and the bike is not shy about its voracious appetite. 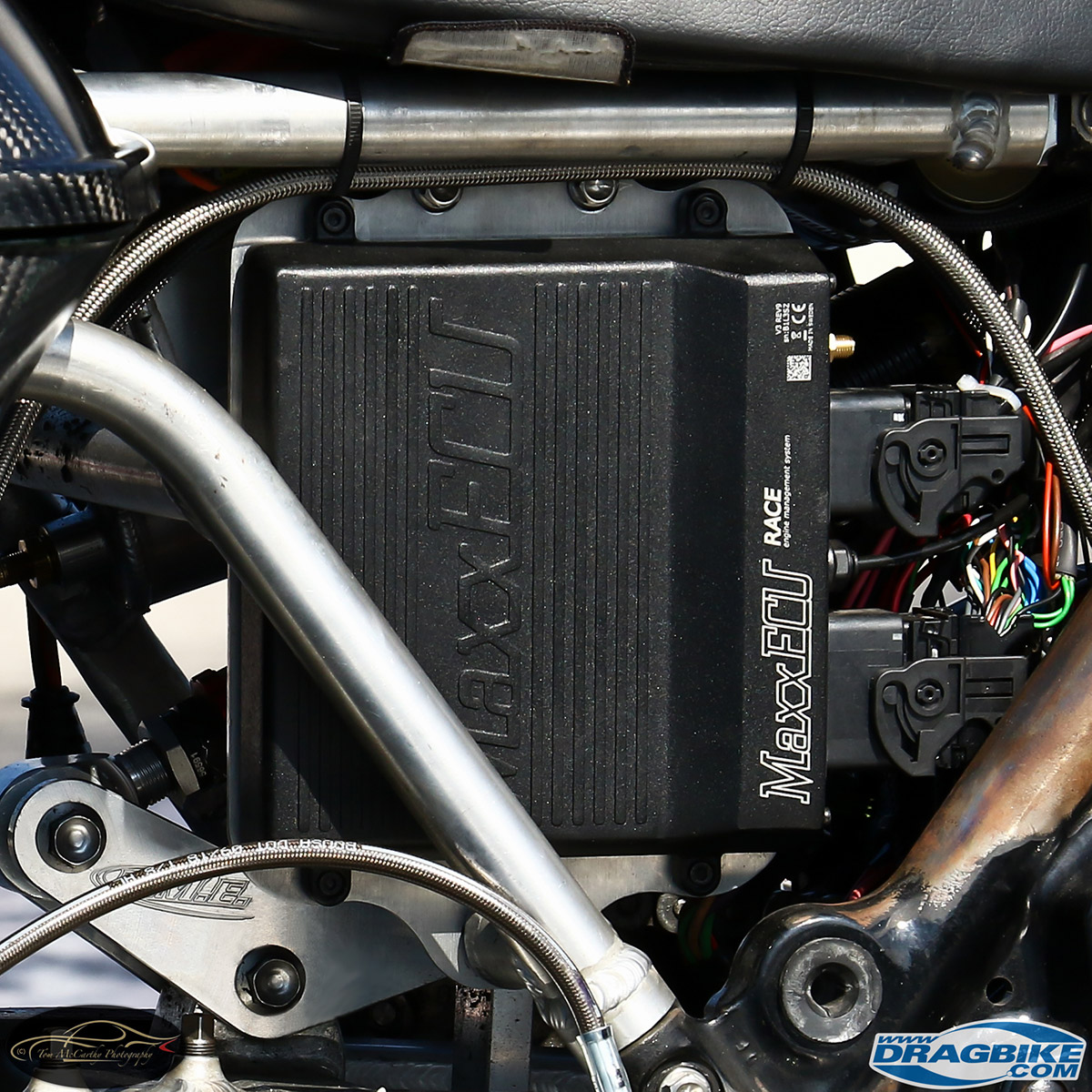 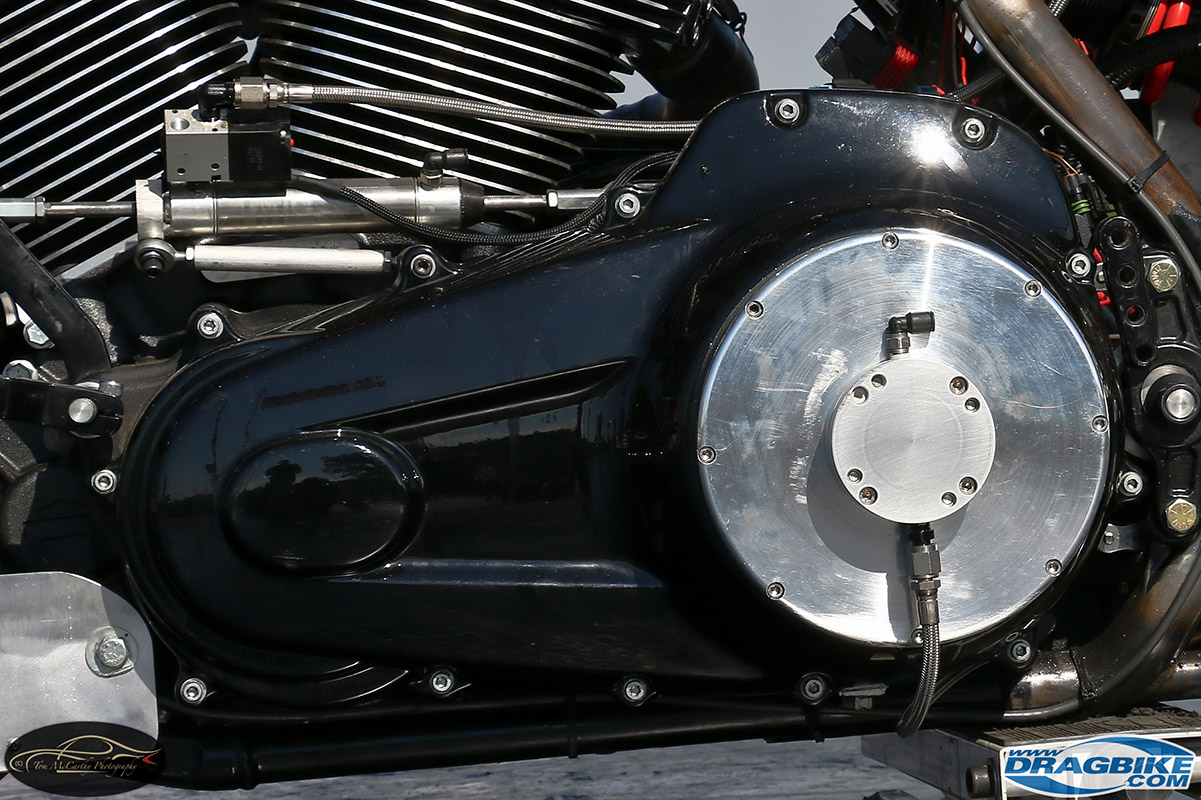 Marc has been on two wheels now since he was 21 years old. He first began motorcycle drag racing in the year 2016 on a motorcycle at Great Lakes Dragway, in Union Grove, Wisconsin.

He chose motorcycle drag racing as his sport of choice because he’d had all the fun he could have racing various car classes with the NHRA, NMCA, and of all things: Snowmobile racing. “We loved racing snowmobiles, but it got tedious trying to travel here and there just trying to find good snow to race in, so once it stopped being fun, that was it, time for something new.” 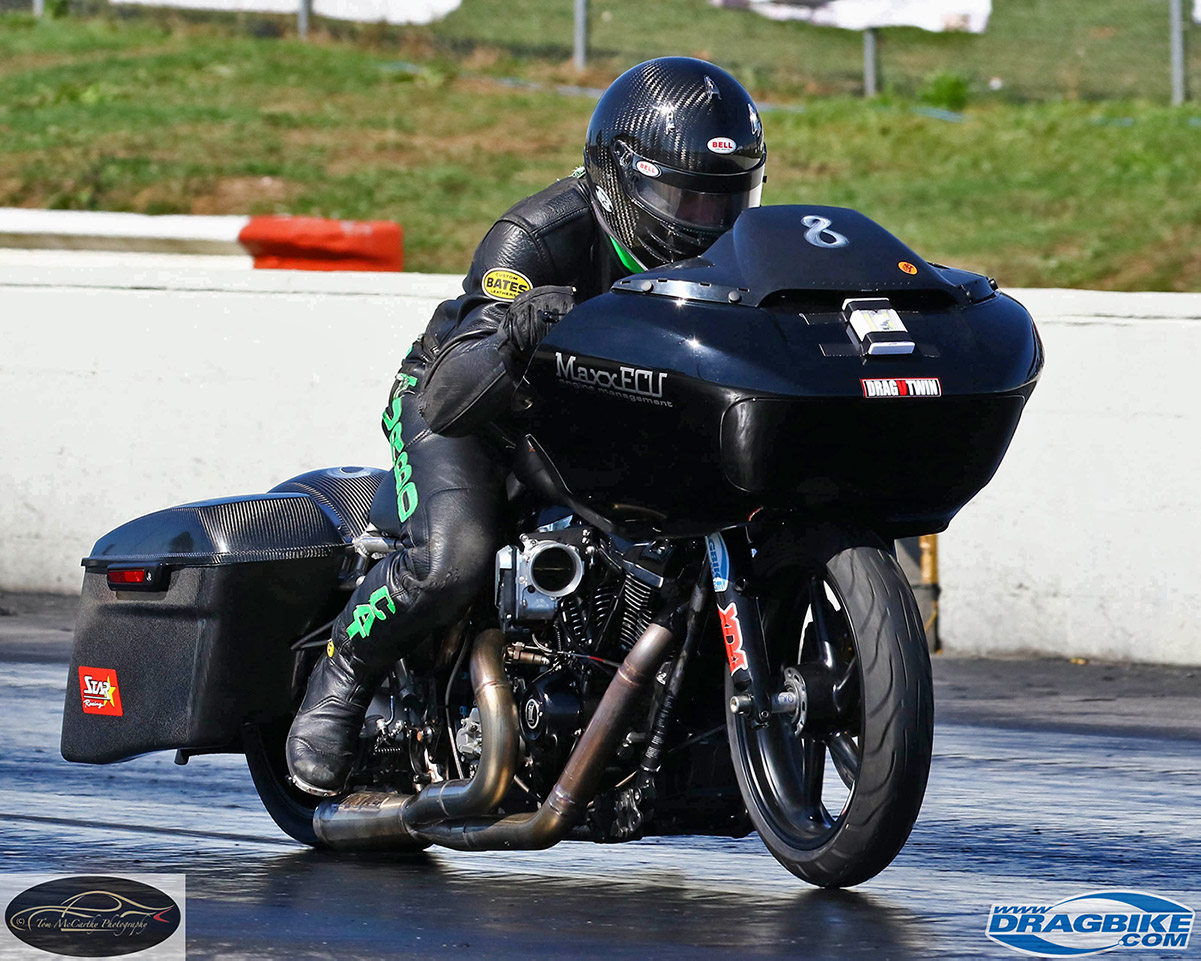 His love of motorcycles led him to buy his first bagger, and when talking about ‘hopping’ it up in the performance department, a friend recommended George Bryce. “So I looked up George,” he stated in a recent interview and recalled, “George was more than willing to up my performance level, and everything snowballed from there.”

Marc has gone from novice new guy racer to the Hog’s Gone Wild Hot Street Champion in five short years with a personal best at 9.12 @ 152 MPH. 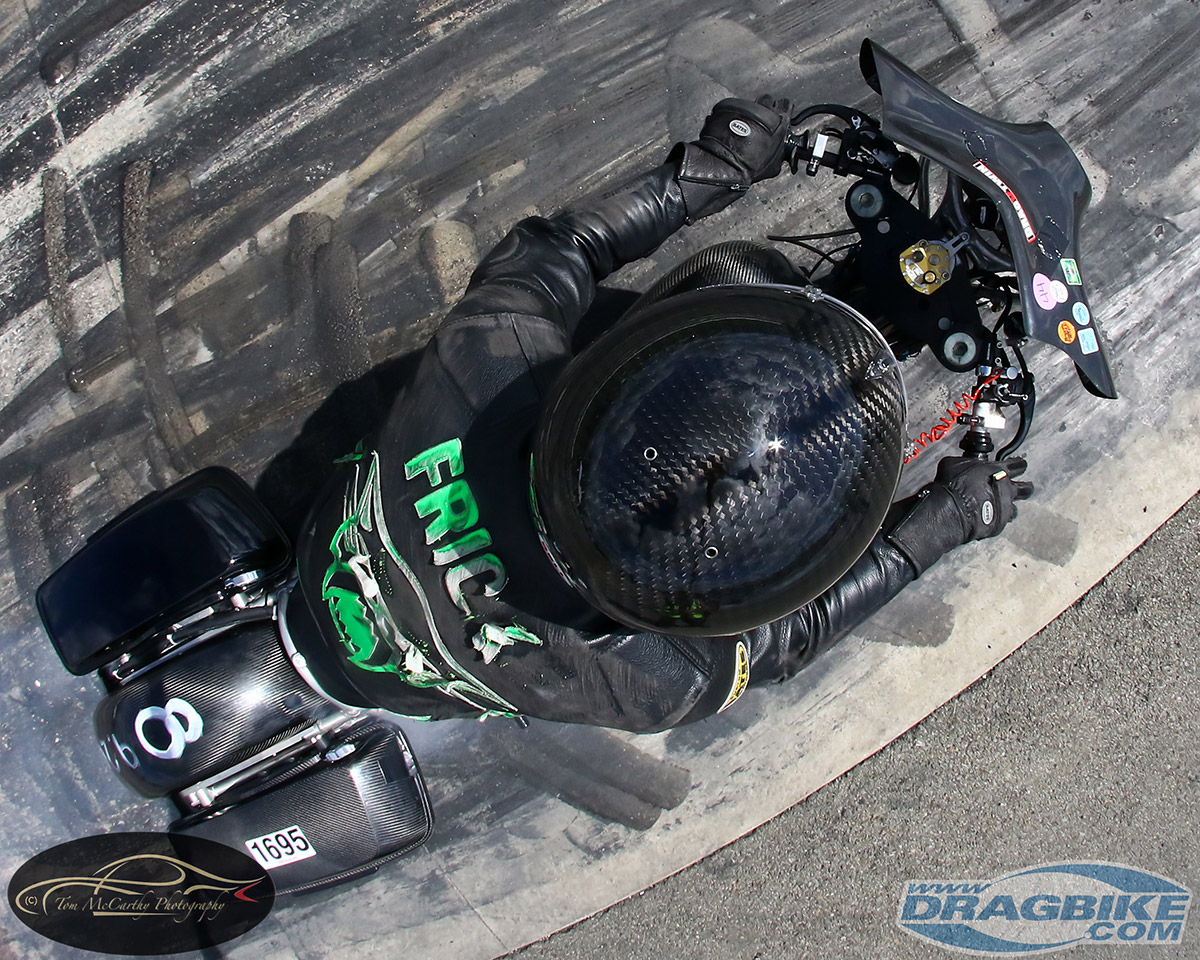 “We are excited for 2021 as we know there is more in it; we just have to figure it out methodically. We are sure we can hone our program in on running 8.80’s, and we should see speeds close to 160 MPH by season’s end.” he elaborated, “Our plans for 2021 includes going to the Hog’s Gone Wild races, and we may compete with other sanctions as well, time permitting.” 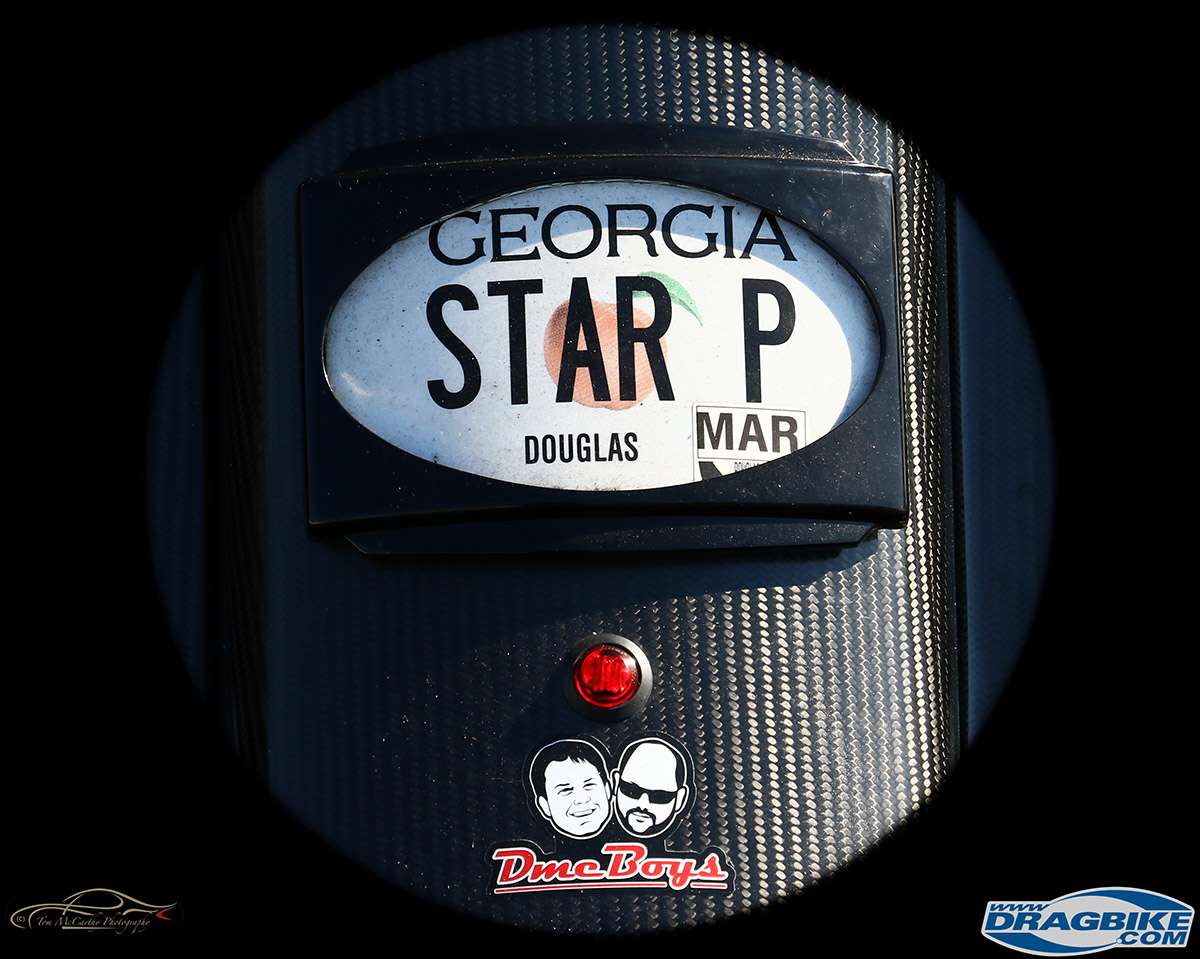 In closing, he offers this, “We couldn’t have done it without the help of the following people: George Bryce of Star Power. Dimey Eddinger and Andy Sawyer of DME Racing gave us vital support providing the chassis, swingarm, header, fuel system, carbon body pieces, and all the fab work. Steve Nichols and his MaxxECU, providing the engine management system and all the tuning. If you can dream it, he can make it do it. Without them big thumbs, it wouldn’t be possible!” 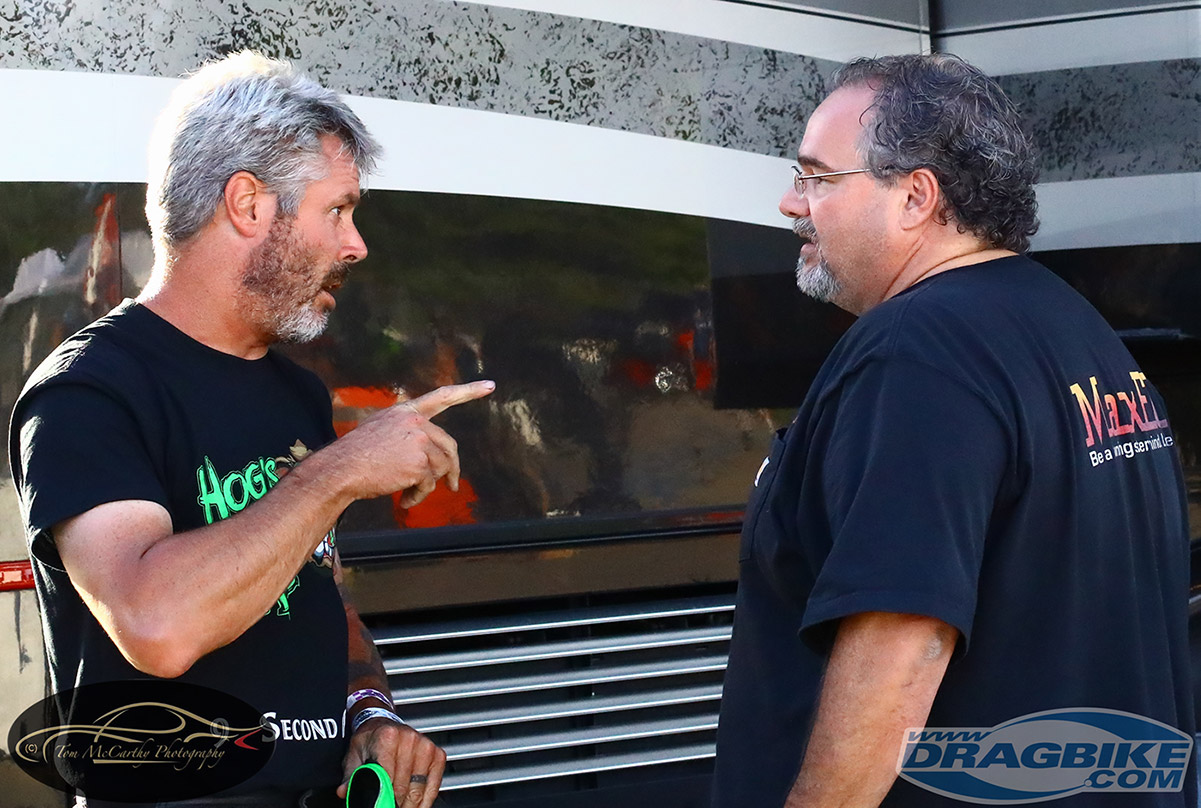 Additionally thank you to Cole Seitzinger of LKG suspension for the rear suspension. Dave Conforti of World Wide Bearings, Navel Bikoma for last-minute fabrication work, Stanley Gardner and Cullen Gillis of Gardner Racing Concepts for keeping the crank spinning. Matt & Angie Smith of MSR for helping with the clutch fine-tuning, Marcus McBain of M2 Shocks for the low-down.

And my crew and family, Nancy Terzolani Fricke, Michael Fricke, Barry Watson, and Eric Brucha – thank you for your help both on and off the track.

Also, a big shout out to Roger Edgerton and Lashonda Carter for this Hog’s Gone Wild racing thing we all love! THANK YOU!