With two ADRL Pro Extreme Motorcycle championships in their rearview, Eric McKinney and the McKinney Motorsports set their sights on the new Professional Drag Racers Association and the first ever PDRA race at Rockingham Dragway this past weekend.

But despite pre-season testing in Valdosta, McKinney and teammate/tuner Ashley Owens had to chase legendary racer Paul Gast in Rockingham qualifying, and finished the sessions second (McKinney 4.067) and third (Owens 4.088) behind number one qualifier Gast (4.036). “Paul just knocked it right out of the park from the get-go,” said McKinney. “He was talking to Dad (team owner Scott McKinney) all winter on the phone, saying ‘I’m gonna smack that kid of yours around!’ and stuff like that. And it was all good fun, but he came out swingin’ and we were chasing him.” 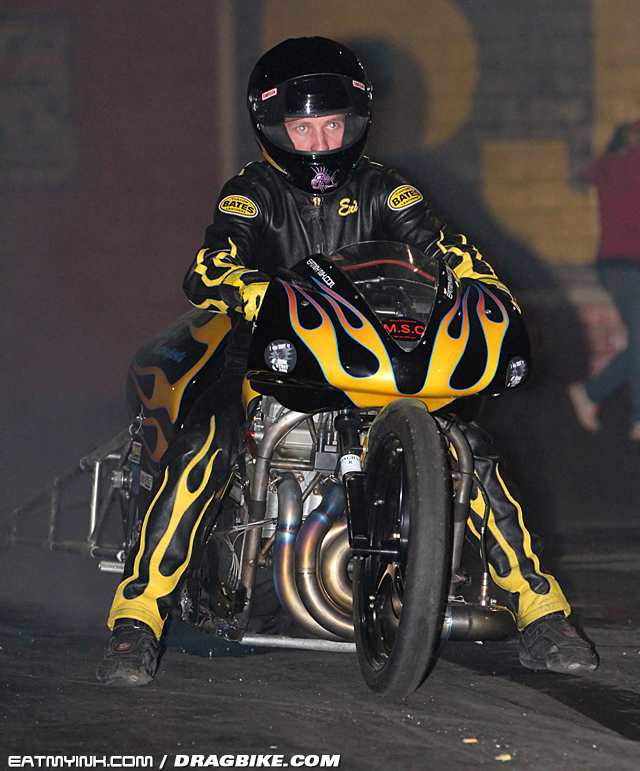 The first round of eliminations was admittedly a poor showing for the whole PXM class, as not a single pair went down the track side-by-side. Gast had a bye when broken Chuck Wilburn no-showed. Ditto for Owens’ E1 opponent TT Jones, who broke in Q4. John Collins sprung a leak at the line and was pulled off against opponent Jay Fisher. And McKinney’s opponent Ronnie Procopio installed a fresh motor overnight, only to simply take the tree in hopes of a McKinney miscue. There was none, and Eric advanced with a 4.07—low ET of the round.

McKinney’s second round opponent was to be teammate Owens, but a defective clutch basket gear sawed through Ashley’s cases in round 1 and ended his day then. Eric ran a 4.10 on his bye to the final. Gast faced the upstart Fisher. Paul had blown the tire off badly on his E1 bye, and again spun out of the groove on this pass. Fisher ran a steady 4.14 to gain his first final.

Sadly for Fisher, he was pulled off the starting line for the final by the PDRA’s Traction Twins when his beautiful yellow bike sprung an oil leak out of the water box. And McKinney was beatable with a 4.12, stretching out second gear with a startling new tune-up from Owens. “The shift points were different,” said McKinney. “It was like a Sunday drive at first, then turned into ‘Game On.’ It hit the rev-limiter going into third gear, and I’ve never done that. It probably maybe would’ve been an .06 or .07, but it caught me off-guard. Ashley’s got a new idea going on and it’s gonna be a pretty good deal for us….if I could just learn how to ride it!” 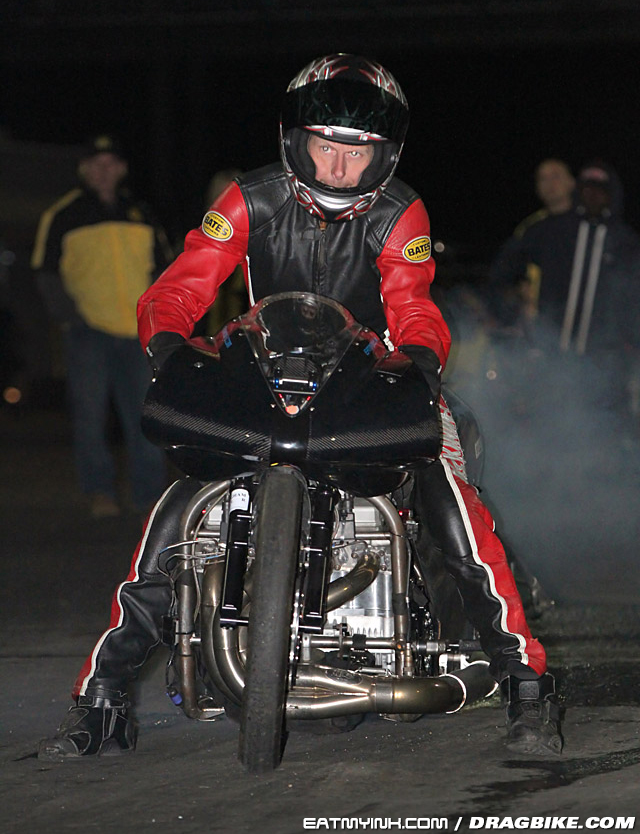 McKinney felt a little guilty about his “Last Man Standing” win. “There was a lot of luck on our side this weekend,” said Eric. “Procopio just broke the beams first round, Ashley was broke the second round, and then they shut Fisher off in the final. That was a tough break for those guys. That was his first final and they did an excellent job this weekend. I wanted to run him.

“So this win was a gift. I like to win, but I don’t want to win like this. I don’t feel like I earned it this weekend, but a win’s a win. And to win the first PDRA race is pretty awesome. I’m excited about it. Now we’re gonna move on and try and do it again.

“I don’t know if we can be as successful as we’ve been the last couple of years, but we’re gonna do what we can do. If people don’t like us because of that, we’ll keep trying to stomp ‘em. The more they hate, the harder we’re gonna work. And this was a good start.

“And it was a good start for the PDRA too. We really want to thank Jason Scruggs and everybody who put this organization together, and also all the sponsors who stepped up to make sure that bikes are a part of the show—especially Vance&Hines and Fast By Gast. 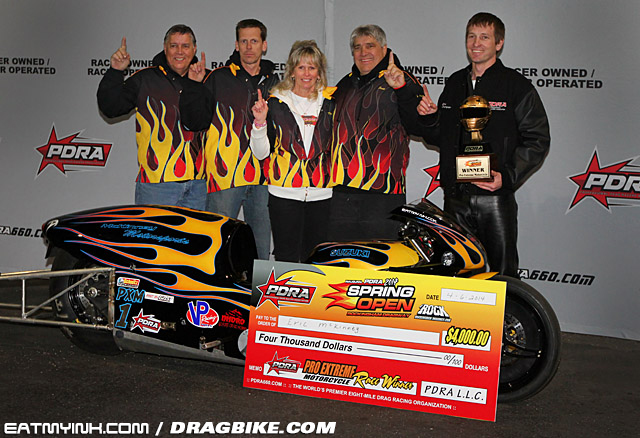 “We get our cranks from Vance & Hines and our cylinder heads from Fast By Gast, so I want to thank them for their help with our program as well. And all the people who put this rocket together and keep it going so I can come up here and let the button go. Ashley’s behind this thing. He’s the mastermind, along with Dad. My Uncle Steve’s on the clutch, and Mom’s keeping everybody in line.”

find out more about the PDRA at http://www.pdra660.com