Eric McKinney is a name that has become nearly synonymous with professional dragbike racing. Three championships across two organizations in a five year career has already inked McKinney’s place in motorcycle history. Dedicated to working hard both on and off the track, he and his team have not only been busy racking up trophies in the new Professional Drag Racers Association, but have been instrumental in the continuity of Pro Extreme Motorcycle.

Since his involvement began, Scott McKinney (Eric’s father) has always been influential in building a motorcycle platform for teams to compete. He, along with rider Steve Drake, got the proverbial ball rolling for Pro Mod Motorcycle in the early 90’s. Drake would go on to be the first ever event champion when Pro Extreme Motorcycle began competition in the now-defunct American Drag Racing League. Famed rider Ashley Owens, who was then riding for Paul Gast and is now teammate and tuner for McKinney, collected the 2010 and 2011 ADRL Championships before Eric claimed the 2012 and 2013 Championships. When the PDRA started taking shape, Scott and Eric joined the team effort to make sure that PXM would continue with the PDRA. So it was rather fitting when Eric claimed victory at the first-ever PDRA sanctioned event in April of this year, the Spring Open at Rockingham Dragway.

“PDRA has been great for us because there’s nowhere to run these motorcycles other than the PDRA now,” told McKinney. “It’s been an awesome that Dad and Jason [Scruggs] have gotten the ball rolling to give us a place to race.

“I hope this streak keeps carrying on,” he continued, “and we can actually win the Championship this year, just for the fact that I actually like this format [of the PDRA] a whole lot better because everybody that’s involved is a racer. It’s more racer friendly. Even the tech guys are more enjoyable to be around. The whole deal is pretty awesome. I love going to the races here. The PDRA is the best thing that’s happened to motorcycles and to have won their first race is pretty awesome.”

McKinney, who actually began his two-wheeled passion with Motocross before switching to AMA Dragbike in late 2008, has only lost two professional eighth mile races since the middle of 2012, going for 15 consecutive races without a loss. His most recent trip to the winner’s circle came at the PDRA Memphis Drags, May 23-24. 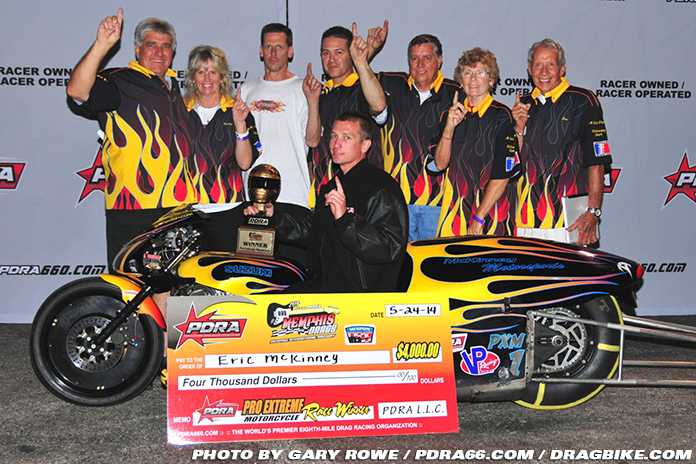 “It was incredible,” McKinney said of his lengthy winning streak. “We have a great combination with the bike. Ashley’s an awesome tuner. The entire team is great. It just kept clicking on. We’re always working ahead and trying to change stuff. On Friday we would qualify a motor. It would run good, but we would take it out and try another one. Instead of just running the race we would be trying something else, always working to improve, and it seemed like everything that Ashley tried worked good for us.”

McKinney and Owens run nearly identical bikes, giving the pair double the information to work with. They currently sit number one and two, respectively, in PDRA points standings. “I want to thank my whole team- my mom, my dad, my Uncle Steve’s on the clutch. Ashley Owens has been an amazing help to the team. Also, Paul Gast with Fast By Gast , Schnitz Racing, ProFab, Vance&Hines, and PMFR Chassis. They’ve really been behind us. My bike was built in 2012. Even after three years, it’s been the best thing I’ve ever rode.”

Most know about McKinney’s ADRL Championships and are probably familiar with his AMA Dragbike Championship in 2009, as well. But McKinney has also found success in a completely different automotive sport: demolition derby. His family’s used auto parts scrap yard, which processes around one hundred tons of scrap every day, provides ample supply of cars and parts for this secondary hobby. More than that, however, it provides the means to continue pursuing Pro Extreme Motorcycle Championships.

“It’s a pretty busy lifestyle. Come home from racing and it’s straight back to work. We work hard at everything we do whether its racing or work in general. It’s just our way of life.”

The saying goes that hard work pays off and it certainly rings true for McKinney Motorsports. They will look to continue their winning ways at the Summer Drags, June 26-28. As always, fans can follow Eric McKinney and all their favorite riders and drivers via the Motor Mania Live Feed, which will broadcast the action live all weekend.