The first race of the Mid-West Drag Racing Series (MWDRS), featuring the Top Fuel motorcycles, sponsored by Pingel concluded on Saturday, April 23, 2022 at Memphis Motorsports Park. Due to circumstances well beyond the control of all concerned, the race ended inconclusively Saturday evening with prevailing track conditions deteriorating.

Collectively, the leadership of the MDRS and track management agreed, that for safety reasons, they halted competition that night in the best interests of safety. Keith Haney, speaking for the MDRS addressed the racers after 9pm and announced that the remaining contestants would conclude their class of competition at the next available race on the schedule for the respective classes in the MDRS.

For the newly minted Pingel Top Fuel motorcycle class, this means the remaining contestants, Sam Wills and Mark Conner, will finish up their match-up at the MDRS event June 17-18 during the Summer Speed Spectacular at World Wide Technology Raceway, to be held in Madison, Illinois. 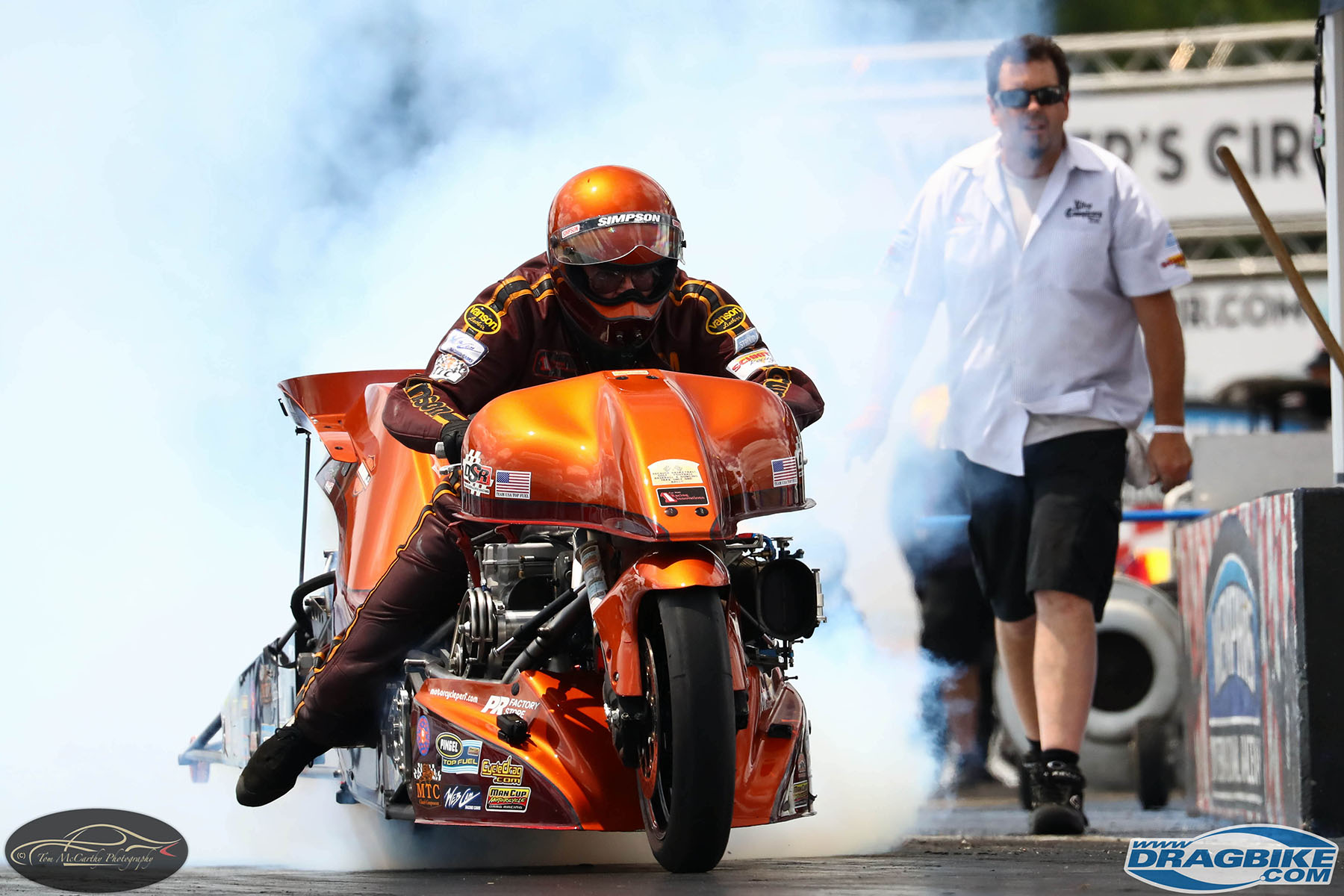 Heavy rains in the area of the Memphis Motorsports Park in the days preceding the event of April 22-23, so saturated the grounds of the racing facility, the high water table was such that water was weeping up from under the racing surface, contaminating the race track. This is the same problem that caused the shortening of the first race of the year for the AHDRA, at Gainesville Raceway, during the first weekend of April.

So pervasive was the problem that the Thursday test & tune and Friday racing was put on hold while the Memphis Motorsports Park staff did everything conceivable possible to give the racers and fans a quality racing surface for Saturday. When the Pro Mod cars came out, they performed two rounds of qualifying with the big monster cars running hard. The top 9 qualifiers of the 20 vehicles entered were all running 3.70 elapsed times, with speeds of 200 MPH in the eighth-mile, indicative of the class.

Saturday afternoon, when qualifying began, the Pingel Enterprises Top Fuel Motorcycles had six bikes entered in the contest. Mark Conner commanded the low qualifier spot after the allotted two rounds of qualifying with a best of 4.265 @ 184 MPH. Chris Hand sat in the #2 spot with a 5.13, Sam Wills 5.21, Curtis Heisler 5.55, Mitch Brown 6.20 and Armon Furr 19.99. 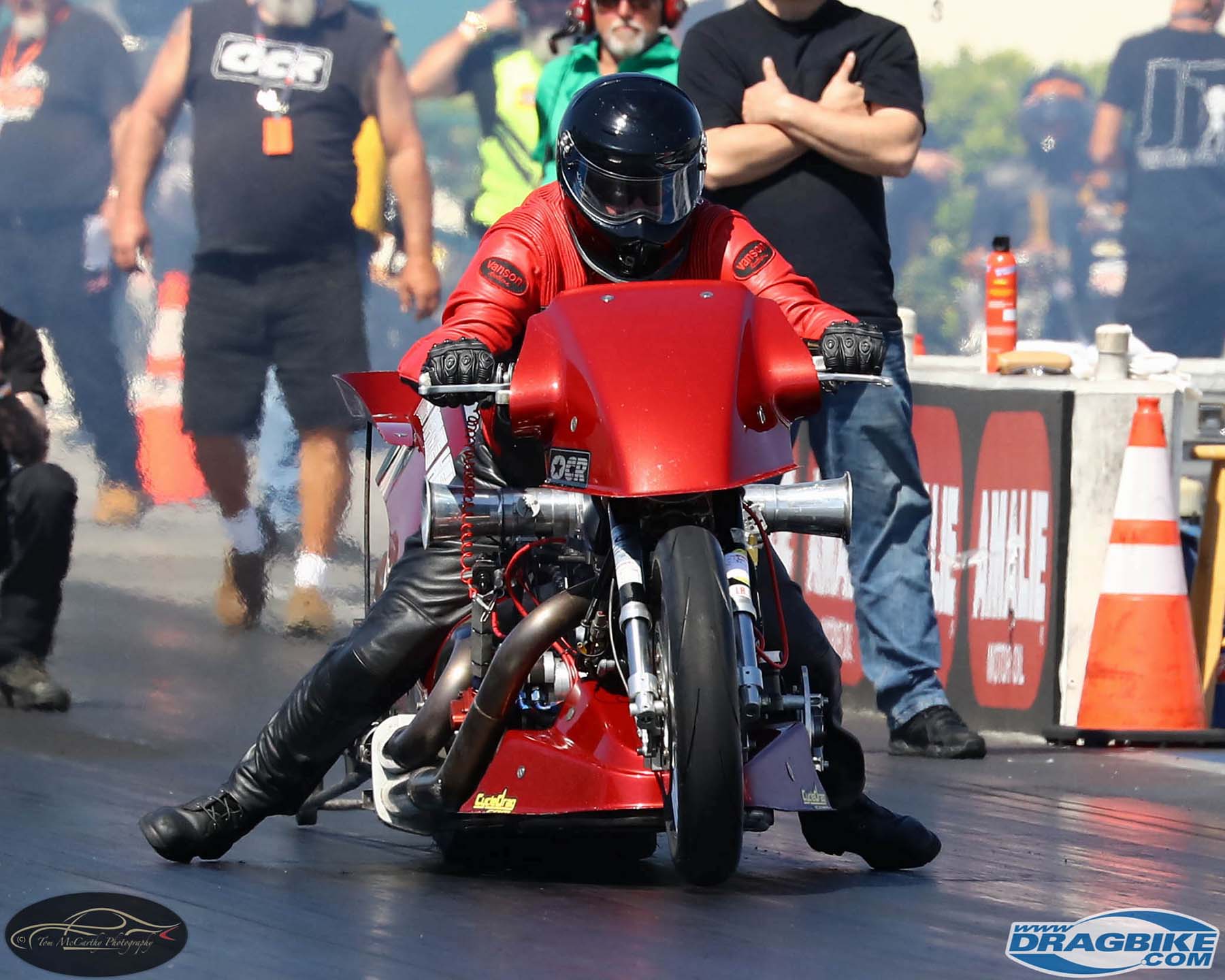 It should be noted that this series welcomes all Top Fuel motorcycles, both Inline-4-cylinder bikes and V-Twin Top Fuel configurations. Sam Wills, Chris Hand and Mitch Brown were all piloting I-4 bikes and all others were competing with NHRA type Top Fuel Harley motorcycles. 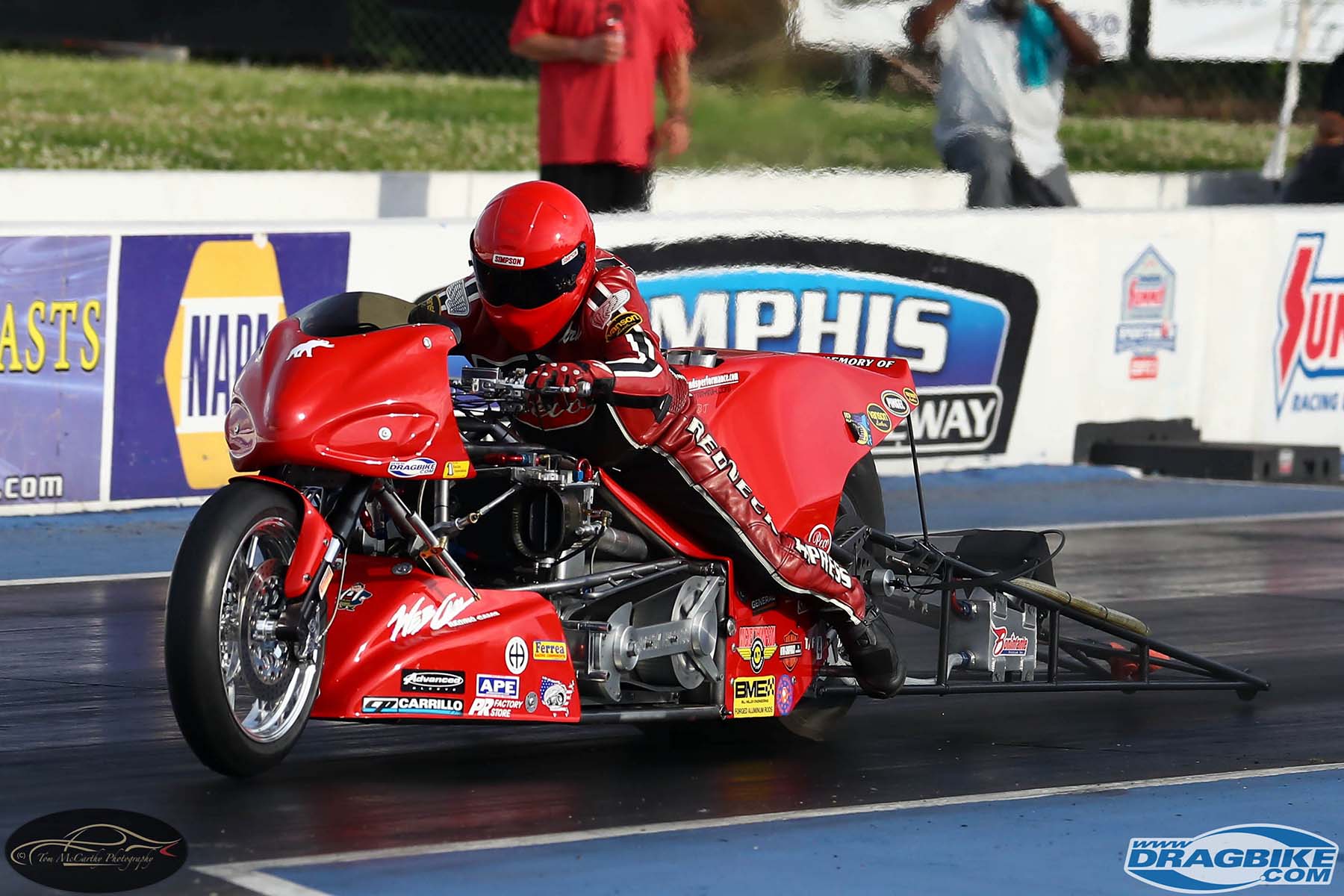 In as much as the entire race program was to be condensed into a one day event, two rounds of qualifying were held Saturday morning, followed by E-1 set for 6PM, Central time. The first round of competition for Top Fuel motorcycles began with Mark Conner matched up against Armon Furr. Mark, driving for Johnny “Red” Rhea in the PTS Top Fuel Harley, laid down a winning 5.01 elapsed time to Armon’s troubled 9 second effort. This automatically earned Conner a bye-run into the finals, next round. 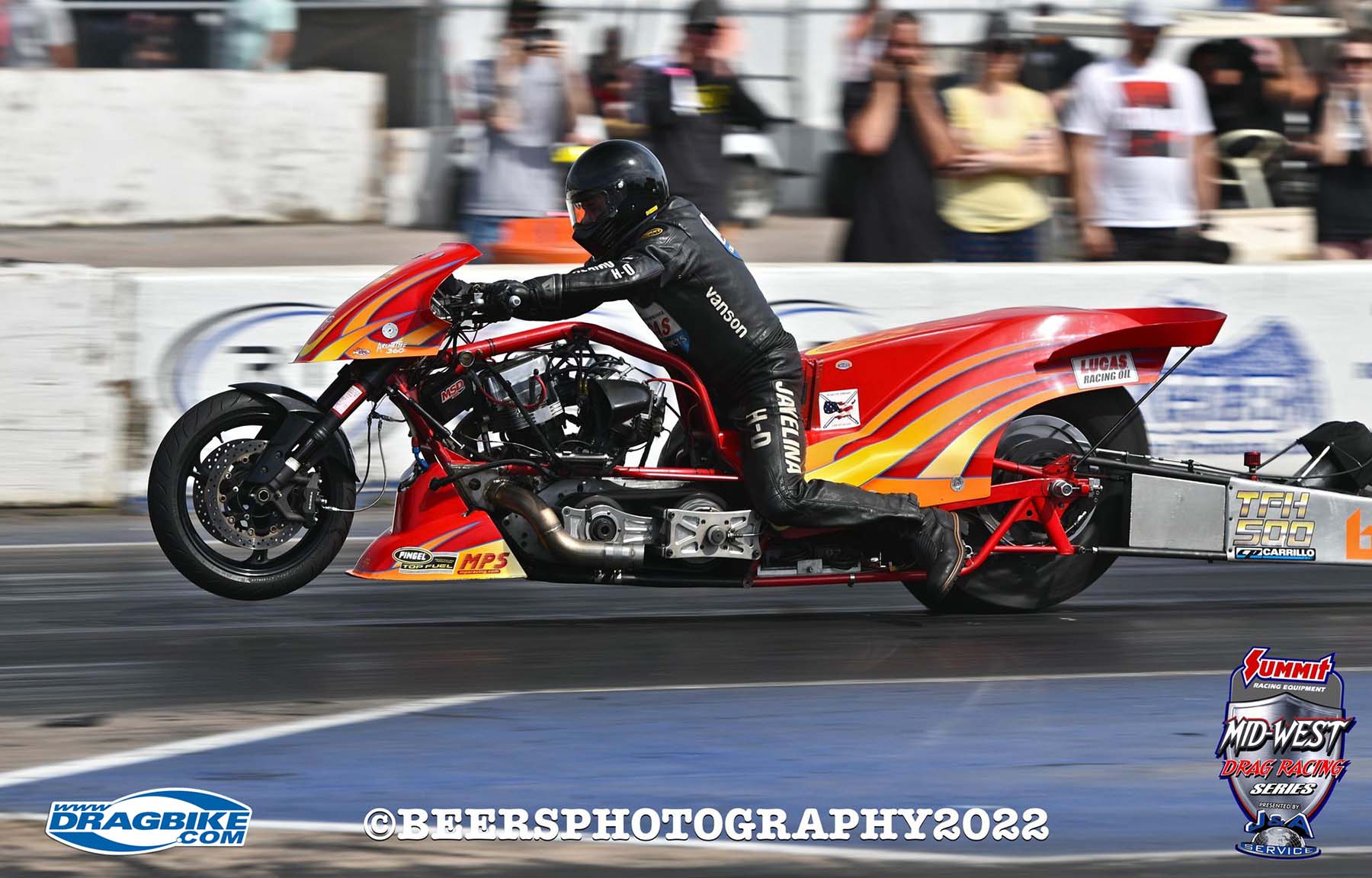 In the next pair out, veteran Top Fuel racer Chris Hand was paired against Mitch Brown. Both bikes broke traction early in the pass and they each crossed the centreline during the course of their run. This eliminated both racers from further competition. 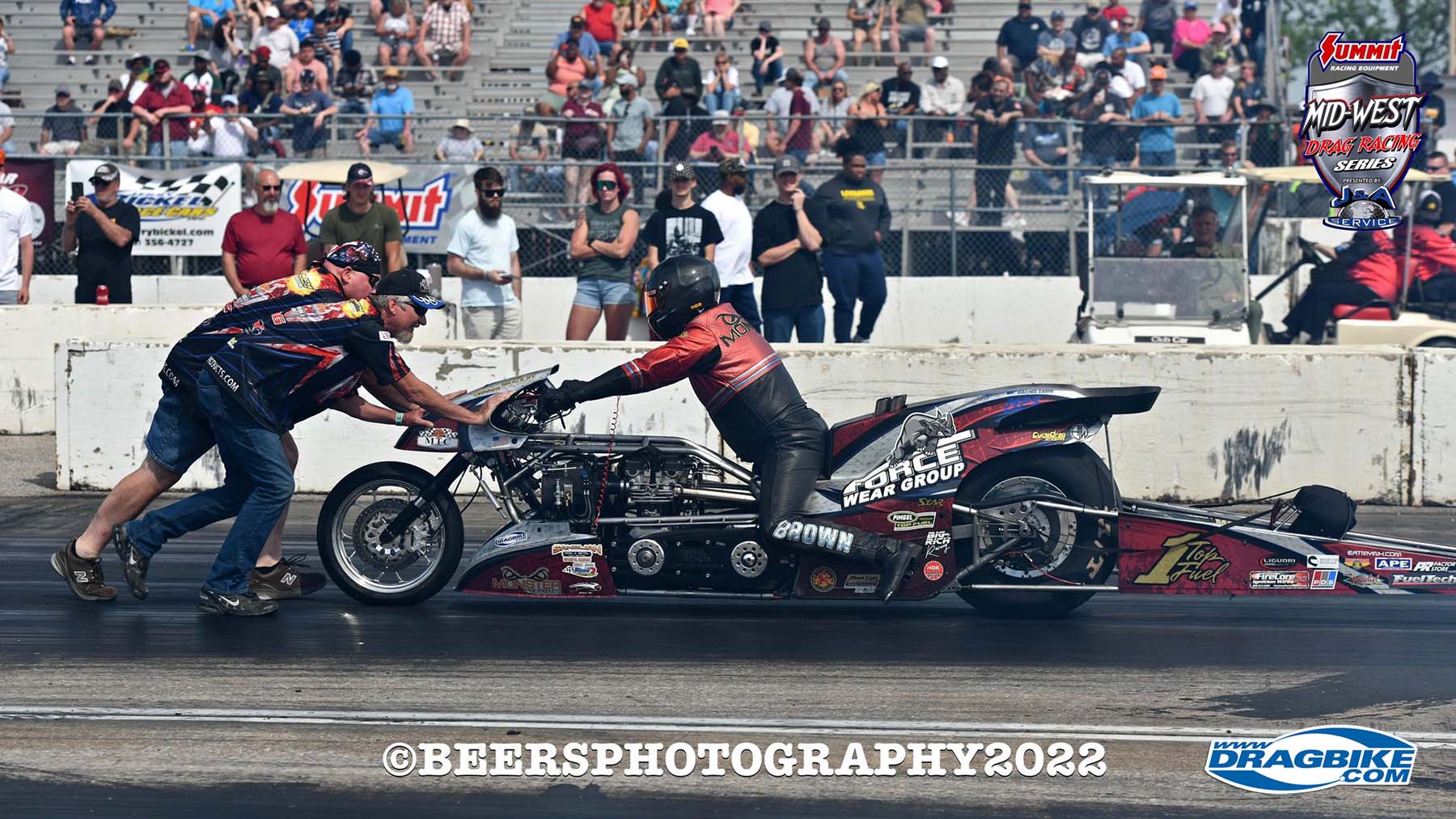 The last pairing was to be Sam Wills and his Nitro Conspiracy team, Vs Curtis Heisler, a relative new member of the T/F motorcycle racing fraternity. Curtis suffered handling gremlins during his initial qualifying attempts and opted not to run during E-1, giving Sam a competition solo. Sam struck the tire early in the pass and coasted the remainder of the run. 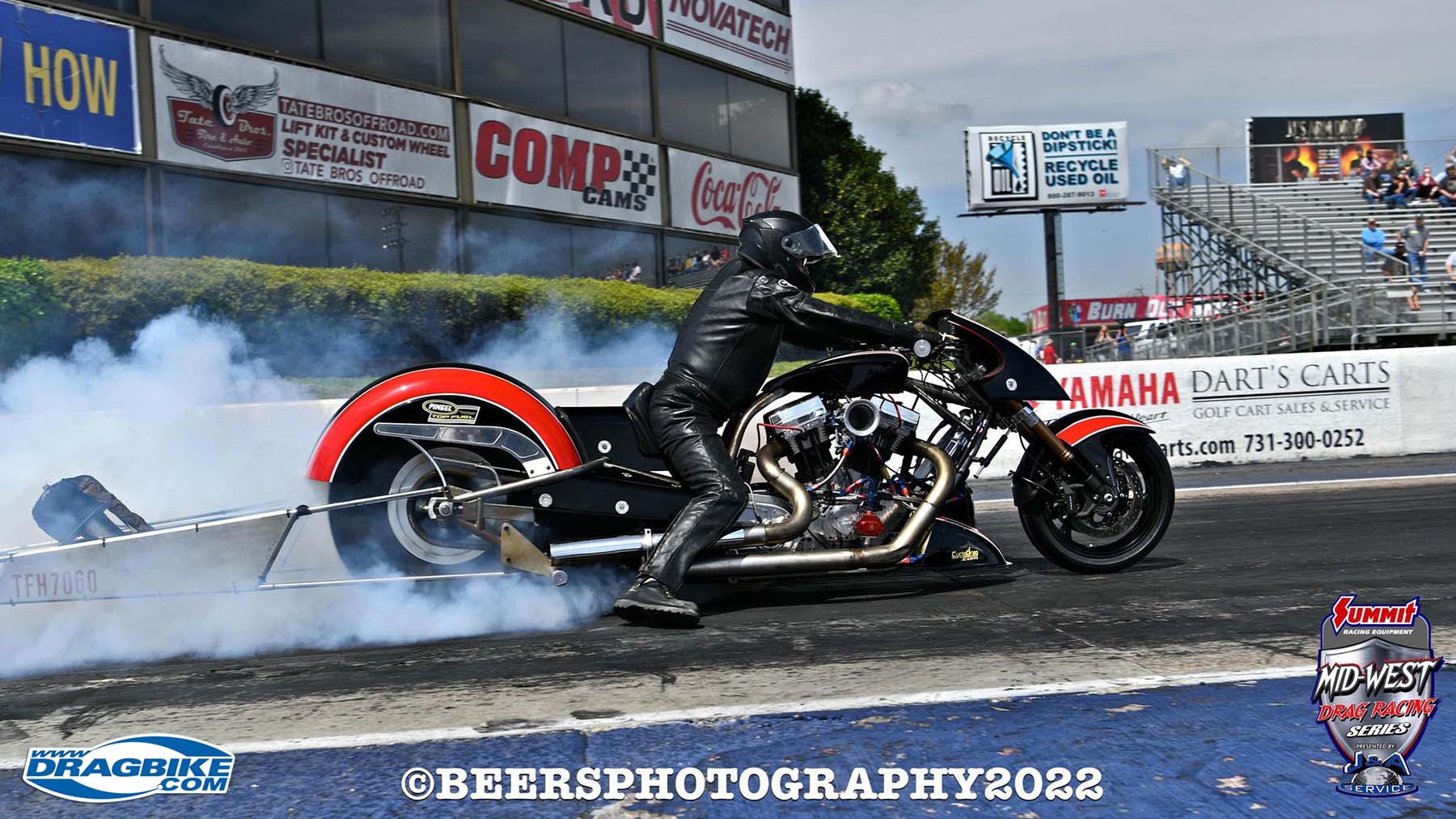 With only Mark Conner and Sam Wills as the remaining contestants to this competition, they will complete the race, during qualifying, at the next event for the Pingel Top Fuel motorcycles at the MDRS event June 17-18 during the Summer Speed Spectacular at World Wide Technology Raceway, in Madison, Illinois.

Thank you to Brian Beers, of Beers Photography, for photo usage.

And thank you to the Mid-Western Drag Racing Series Media department, Ellen Eschenbacher for timely updates and timesheets.

Early in 2017, a group of racers realized that there were a lot of Mid-west-based Pro Mod teams sitting at home and not racing. The reason for their lack of participation was the fact that most major Pro Mod events are staged on the East and West Coast, thereby adding a lot of additional travel expenses and time off work to compete in these series. This left a lot of Pro Mods sitting in the shop and racers sitting at home. The Mid-West Pro Mod Series was created to alleviate this problem and allow Mid-west racers the opportunity to compete in the central US without having to travel a long distance.

Drag racing is a sport built on passion, but passion alone can’t keep the lights on, employees paid and the track gates open. For that, a track needs to be profitable, offering a facility and events that make its customers-racers, fans and sponsors want to come back time after time. Keith Haney helped create the Mid-West Pro Mod Series (MWPMS), a professional drag racing organization that delivers a generous sponsor package, star drivers, immaculate cars and an unrivaled eighth-mile show to complement each host track’s special event. This group of racers formed the MWPMS to make a place for Nitrous, Roots-Blower, Turbocharged, Pro Chargers and Screw Blown Racers to compete on a level playing field. They decided to keep it simple – one class that promoted parity among the different combinations.

“We’re not trying to be the whole show, we want to come in and help boost a track’s already established event,” Haney explains.

They also wanted to stage well-run events at premier tracks in conjunction with their existing – well attended – large scale events. In 2019, we ran a total of 9 events: 2 at Worldwide Technology Raceway (Formerly Gateway Motorsports Park), 2 at Tulsa Raceway Park, 1 at the Texas Motorplex, 1 at Xtreme Raceway Park, 1 at Beech Bend Raceway, and 1 at Memphis International Raceway. In addition to these events the series was also invited by NHRA to hold an exclusive 22-car invitational event in conjunction with the NHRA national event held in Dallas in October 2019. The MWPMS became the first eighth mile Pro Mod organization invited to compete on the NHRA stage with the 330-MPH Nitro and Pro Stock cars.

The racers loved the feel of competing in front of tens of thousands of fans. In addition to the many fans at the NHRA event, the races at Tulsa Raceway Park saw the racers compete in front of almost 50,000 spectators, while the inaugural event held at the new Xtreme Raceway Park hosted 7,700 paid spectators.

Over 60 different Pro Mod teams competed at the 2019 events. At the St Louis event, we set the single event car count record with 38 competitors showing up for a 16-car qualified field.

As the series grew and became known as a series that truly cares for the racers, opportunities began to open up to expand the series. One of those options became available in 2020 when the series added junior dragsters to the show. “Drag racing has always been a sport that can be enjoyed by the entire family of all ages, and we saw the opportunity to bring in the young racers and their families to compete at races right alongside their big car counterparts. The junior drivers and families are a great addition and we truly enjoy having them as a part of the series”, states Event Director Ellen Eschenbacher.

With these two class additions it became apparent that the series, which was originally founded to provide a place for Pro Mod racers to race, had outgrown the Mid-West Pro Mod name. “The series was no longer synonymous with just Pro Mods, so a decision was made to change the name to something that would better reflect the variety of classes we have involved in the series, and the series was re-branded as the Mid-West Drag Racing Series”, states series founder Keith Haney.

Our business model is very lean and mean. We don’t want a lot of overhead, but we do want to make it one of the top organizations in drag racing. The MWDRS team consists of Jimmy Boles as Race Director, Lonnie Grim as Technical Consultant, Ellen Eschenbacher as the Event Marketing Director, and Keith Haney as Owner/Director of Marketing and Sales.