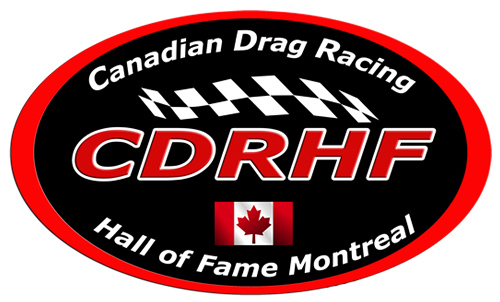 During a special ceremony, at the 12th Annual HOF Induction Banquet and Reunion, November 4th, 2017, at the Sheraton Toronto Airport Hotel, Mike will be joining such all time greats as, Bernie Fedderly, Dale Armstrong, Graham Light, Jeff Arend, and Bill Kydd, just to name a few of Canada’s drag racing greats. 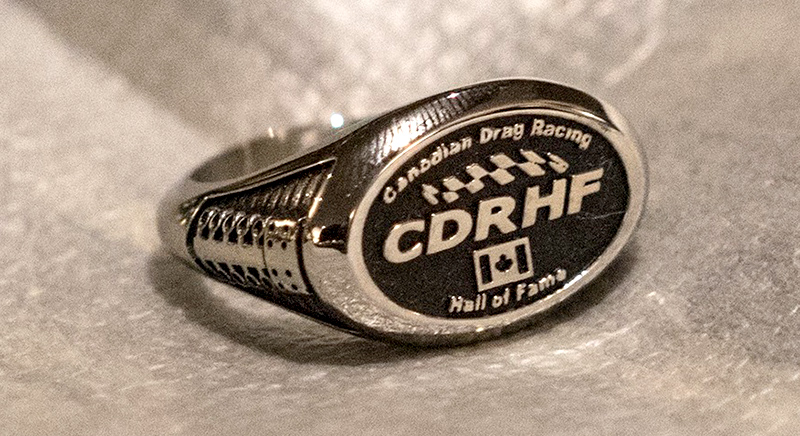 Mike was born March 31, 1959, in Bowmanville, Ontario, CA. That’s 19 hours of driving, some 1254 miles north of Gainesville, Florida, where he raced in the PROSTAR series more than once, back in the day. 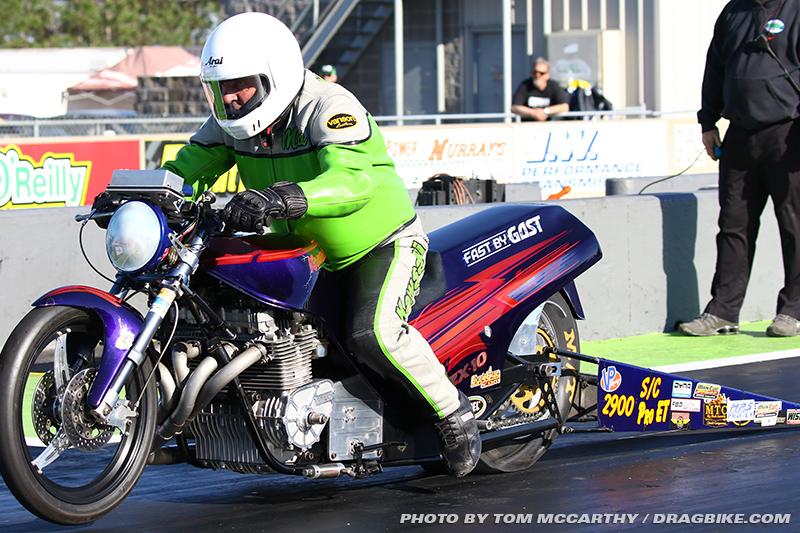 Drag racing came early to Mike, “In the early 1980’s, I went to Cayuga, Ontario and saw my first drag race. That was it, I was hooked.” Initially what attracted Mike was the adrenalin and the challenge of Sportsman racing “I love the speed, and it’s a challenge to try and run the number again and again – to repeat yourself, trying hit that same number every time.”

Mike was first drawn to motorcycle drag racing as a sport when in the early 1980’s he attended his first “All Bike” event, the US Motorcycle Nationals at Atco, NJ. He remembers “In 1981 I attended the US Nationals at ATCO and saw Terry Vance on that Top Fuel bike. After that we went every year, four years in a row. Wow what a memory, I still have the photos from that. It got rained out the next year, but we went anyway and yeah, four years in a row, we kept going back to Atco.”

During the 1980’s Mike began motorcycle drag racing with his street bike at drag strips in Canada and in the USA. ““My first race bike was a 1973 Kawasaki, 900 that was punched out to about 1075cc, and it was my street bike as well. It was a lot of fun” As he developed as a motorcycle drag racer, Mike cut his teeth at the local tracks in Canada, like Cayuga Ontario Speedway.

As the 1980 era wound down, Mike began paying close attention to sanctioned motorcycle drag racing on the National level. While he did race some CMDRA and IDBA events, his real heart was set on AMA/PROSTAR racing. “I was a loyal AMA/PROSTAR racer for years and did some IDBA races and local races as well, but PROSTAR racing was the toughest and the best. I started racing with AMA/PROSTAR in 1991 in the sportsman classes of S/C and Pro ET, back when Super Comp was an 8.60 dial-in. At one national event in 2002, at Norwalk, Ohio, I won in three of four classes I entered. I’m pretty sure it was T/G, S/G and Pro ET at that race.” 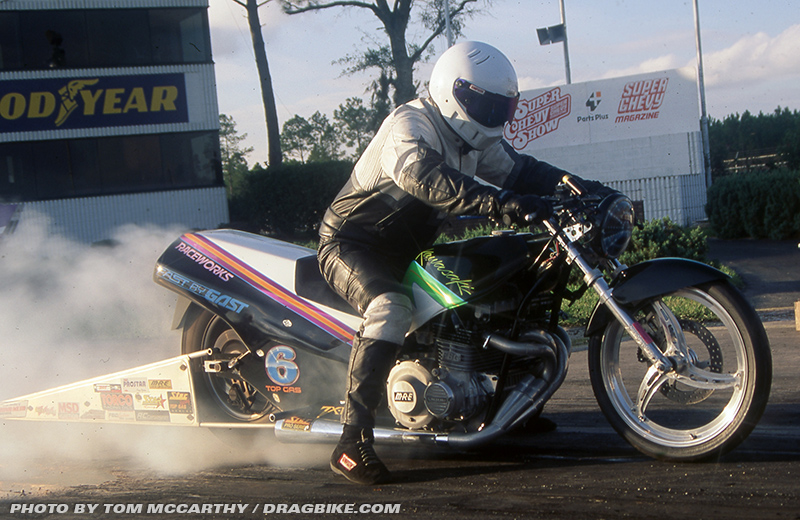 Mike was one of the early Sportsman racers to enter into multiple classes and race more than one bike at the same national event. His appetite for drag racing back then was immense and his success level was high. “I usually raced in three, sometimes four classes during a race weekend, sometimes with 2 or more different drag bikes. It was a very hectic time on race weekends for me.”

Accordingly, Mike got in a lot of seat time, “For sure I’ve made over 23 passes in one day at a one race, I like to test if I can, but I never really kept close count. I’m sure I’ve made more runs than that in a day.” Now double that number for a two day national event and you can see how Mike honed his skills to a knife edge. There’s no substitute for seat time and Mike Konopacki had a lot of that during his racing years. 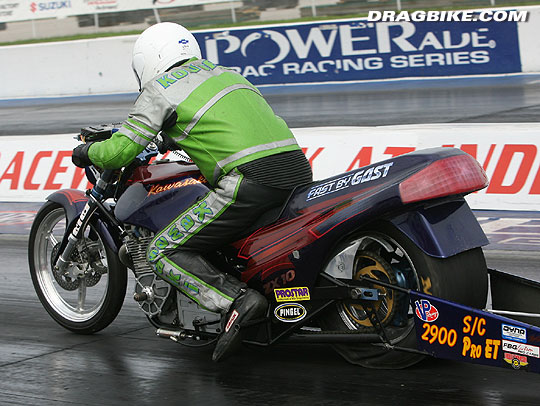 Mike’s stats are impressive by any measure, but here’s his collection as best he can recall:

During Mike’s primary racing years, he amassed, over 100 final round appearances, over 400 round wins and 9 number 1 qualifying spots; between racing in Super Comp, Top Gas and ET racing class competition. His biggest win, or most memorable: his triple championship achievement during the 2009, AMA/PAROSTAR season. 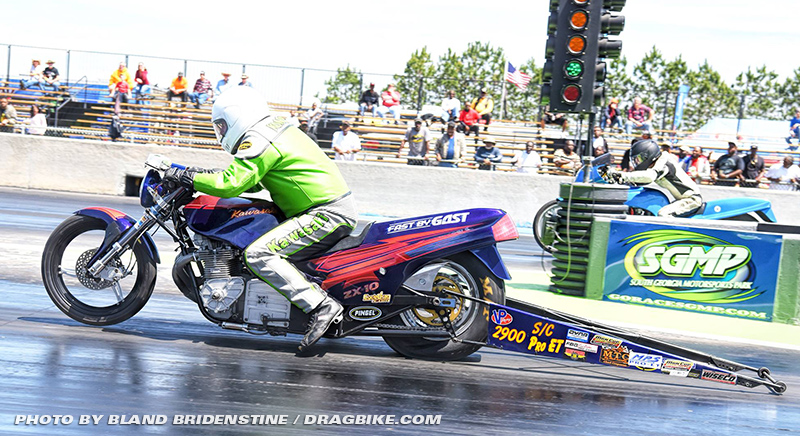 Mike will be the first to tell you, he didn’t achieve this by himself, “My family has always been my biggest supporter, I couldn’t have done it without them. It’s fun for me because I’m the one racing, but for them; it was work – I can’t thank them enough.” Mike’s family, were always there for him with support and encouragement . “I also want to thank Paul Gast and his Fast By Gast shop, they always did whatever it took to get me out onto the race track, every weekend. FBG kept me going, many, many times.”

It has not been all glory and winner’s circle photos for Mike during his decades of racing, which he still enjoys when the spirit moves him. Mike paid his dues like most other drag bike pilots, he’s been off his drag bike at high speed. His bad day of racing happened in 1993 when he came off his drag bike at Cayuga Ontario Speedway in 1993 due to a high-speed-wobble. “I broke my shoulder and some ribs, I know what it means to go down.”

Mike could have turned Pro, as many racers do, but he chose not to. Truth be told, he held an NHRA P/S motorcycle license at one time and even entered one race. But that kind of racing was not for him ““I’d rather race my motorcycles than work on them. I don’t want to go to a race and bring my bike home in a basket and have to work on it every race.”

What kept Mike going for so many years as a Sportsman racer? “The thrill of NOT being strapped in is what makes me feel alive, that does it for me. But I also enjoy seeing all my friends and extended family at the races, just talking to people, that and seeing the next generation of racers coming up.” 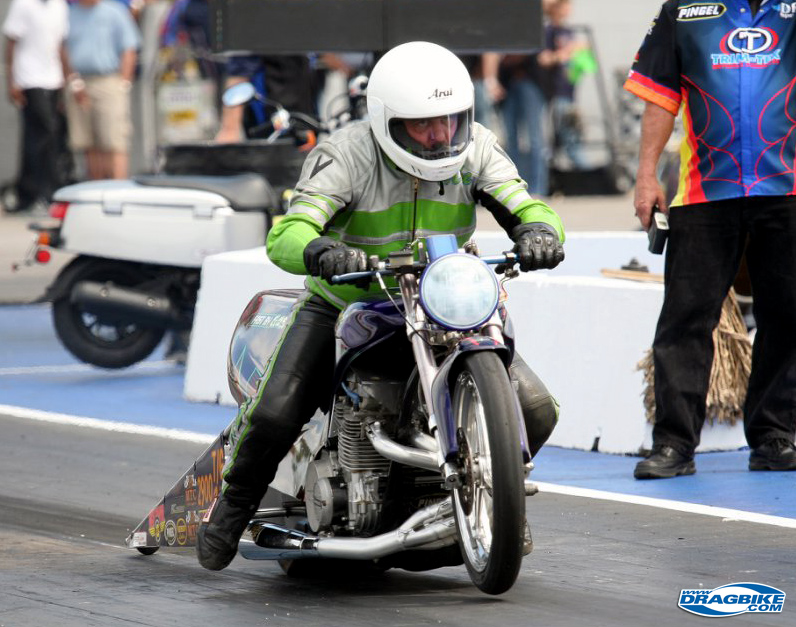 With close to three decades of motorcycle drag racing to his credit Mike now joins the elite in the Canadian Drag Racing Hall of Fame. On occasions, racers and fans will still see Mike at the races, sometimes in the pits talking to old friends and foes, other times on one of his drag bikes giving the new generation of drag bike racers lessons in Sportsman racing. Know this: if you’re a motorcycle drag racer and you see Mike Konopacki line up with you some Sunday afternoon, don’t make any mistakes on your run or your very likely going home early.