In his first full year of racing in a pro class Mike Pearce Racing has won the 2014 AMRA Pro Gas Championship. Pearce is not a total rookie to drag racing, he started racing with AMRA in 2007 at Silver Dollar Dragstrip with a Victory 2003 touring cruiser running 12.80-13.30. According to Pearce, “I decided to run in Bagger class, and won the race because the other bike wouldn’t start. I got hooked then, and decided to build a drag bike.” An auspicious beginning but isn’t that how it often is? 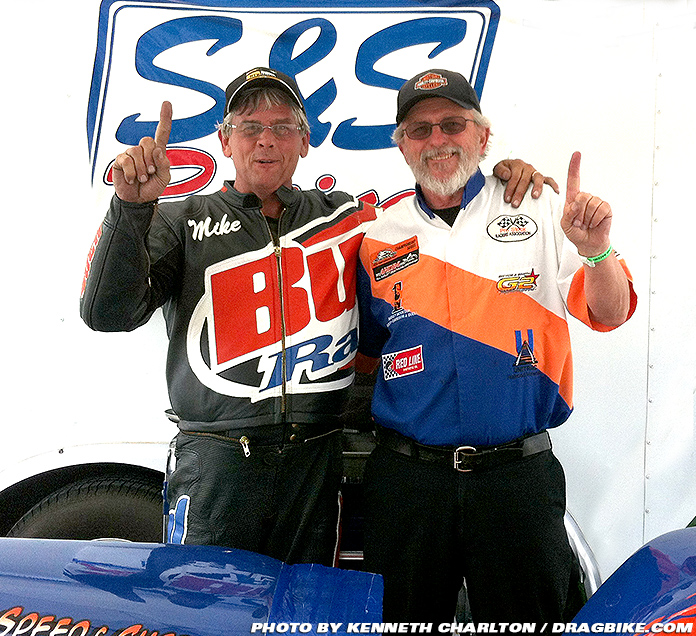 After getting the bike ready for the 2008 season, there was a small setback. I was starting the bike, and was not aware the fuel line pushed off the connector, and the bike burst into flames, with me on it. After getting the fire extinguished, I realized several things: all the work on the bike had just gone up in smoke; I had 1st and 2nd degree burns on my arms, neck, face. and I really need to go to the hospital and after 2 days, I went . One month after the fire, I got on my Touring Cruiser, and spent the next 30 days on the road, thinking about how it all happened. I came home, took the old pile of ashes, salvaged the frame, and made the last AMRA races of the year. I rode that bike until 2010 when I get a PMFR rolling chassis, but with a Victory engine. I ran that bike in v mod until 2014.”

Last winter, Pearce was ready to step it up a couple notches by purchasing the record setting and Championship Pro Gas/Pro Stock program from Tom Caldwell and probably his best decision was to keep Caldwell on as the crew chief and guide in his transition to a low 8 second running bike. 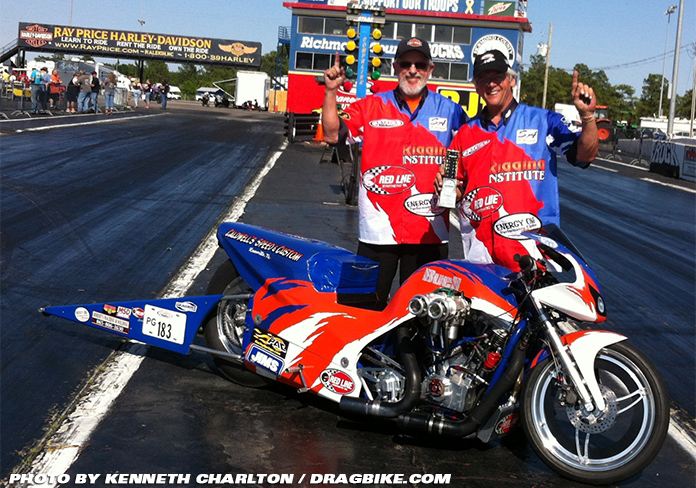 According to Caldwell, “He listens to my advice and has done very well. There have been a couple of stumbles and mechanical failures but we have won 2 races, 2 runner-up’s, qualified #1 six times, #2 twice, and ran a stellar 8.06 at the last race in Rockingham, all these were achieved within his 1st year on the bike. Our team had an 85 point lead coming to final AMRA weekend and finished in the lead after the rain out at the Rockingham race.”