Miller Brothers Productions, LLC (MBP) is proud to announce the launch of the Xtreme Dragbike Association (XDA). The series will consist of a total of 6 events in 2018, and will be held at Maryland International Raceway, Virginia Motorsports Park and Atco Dragway. The XDA will be an East Coast motorcycle drag racing series. The class structure will be made up of professional classes, sportsman classes and grudge racing. The XDA series is solely owned and operated by Miller Brothers Productions.

Maryland International Raceway (MDIR) has always been the hub of the motorcycle series for the past two decades. So it was important for MBP to wait until all contractual issues and restrictions were resolved with IRG before moving forward with the series. With recent changes in IRG senior management, the opportunity to resolve these matters and start this new series became possible. With good faith negotiations on both sides, a deal was signed to host three XDA events at Maryland International Raceway.

The IDBL will now become a single, independent event held at Maryland International Raceway on June 8-10, 2018. The event will be called the “IDBL Sport Nationals” which will showcase motorcycle drag racing sportsman classes and grudge racing. This IDBL event will be run by Royce Miller and the rest of the MDIR team.

Virginia Motorsports Park (VMP) was recently purchased by Tommy and Judy Franklin this past October. With a long-term personal relationship between the Millers and the Franklins, it was only natural to bring the XDA to Virginia. VMP is a great facility in a good market for motorcycle drag racing. MBP is excited to see the new direction of VMP and be a part of their future success with bringing two XDA events to their facility.

Atco Dragway has a rich 40+ year history in motorcycle drag racing with the Orient Express Motorcycle U.S. Nationals. This event will be a flagship event on the XDA schedule. The event has traditionally been held in September; but with the new XDA schedule and proper spacing between the events, the Atco event has been moved into May. MBP has worked with Len Capone and Caitlin Sabin at Atco Dragway for several years and is excited to return with an XDA event.

Jason Miller (XDA promoter) stated, “Chris and I have missed our motorcycle drag racing community the last couple of years. We are beyond excited to be back in 2018. There are still many details to be finalized in the series such as classes, rules, purses, etc. We expect to have XDAracing.com up and running in the coming weeks with more details on the series. However, we wanted to announce the 2018 XDA series and dates as soon as possible so everyone can make plans while we work on the rest of the program. We are going to need everyone’s support with the XDA to make this series the best it can be.”

Chris Miller (XDA Director of Operations) stated, “Jason and I are ready to roll up our sleeves and get to work. We’re really looking forward to seeing all of the familiar faces along with some new ones. This is going to be a great series for all – we’ll see you in April!” 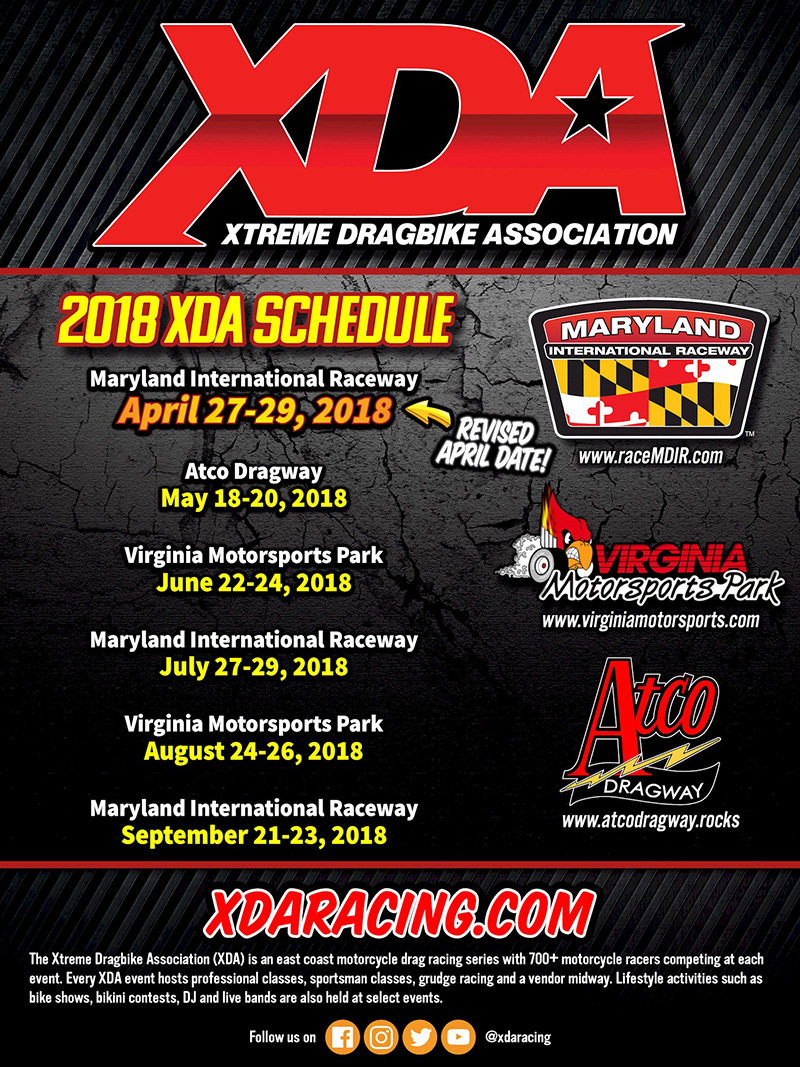