Story and Photos by Tom McCarthy

Through social media recently I asked the masses, “In YOUR opinion, WHAT was the most important event in motorcycle drag racing that happened during the 2017 season?” To be clear, an event is defined as an outcome or occurrence, usually of some importance. And that was indeed the intention of the question – what happened in the realm of motorcycle drag racing, during the 2017 competition season that was of high importance to my friends and followers.

There’s 365 days that encompass any given calendar year, 52 weekends of racing are happening and with all that on the table, who or what gave the most memorable performance that stuck with the racers and fans who attended or followed motorcycle drag racing during the 2017 season?

About 99 respondents gave input to the question. No less than twenty-five of the respondents commented on Larry McBride’s performance, close to fifteen indicated the Man Cup, Mann Hill Garage World Finals race was the shining star of 2017, close to a dozen people indicated Kirby Apathy’s Pro Fuel bike run in the six’s was the biggest thing that happened in 2017 and at least ten folks indicated Tak Shigemitsu’s run was right up there with Kirby’s run. So let’s take a closer look at what shook the world of motorcycle drag racing in 2017.

It’s very interesting to note that while a variety of racers, fans, and photographers from all across the globe responded to my question, all of them had comments with one common thread that is inescapable: the biggest and most memorable event that happened in 2017, happened during the Man Cup, Mann Hill Garage World Finals event. The race was held at South Georgia Motorsports Park in Georgia on November 16-19, 2017 and to quote veteran racer Bill Vose directly, “That event may easily have been the event of the decade, in many ways.”

In drag racing, it’s all about the combination to achieve maximum performance. No one thing makes over-the-top, world-class performance happen. It’s only when a perfect storm, so to speak, comes together in one place at one time to set the stage for the magic to be even able to happen. The tune-ups and driver actions can only happen if the track is there and the weather conditions are right.

That Jay Regan and Dave Schnitz chose to partner with SGMP and hold the event in November on an annual basis precedes the majestic accomplishments. The track prep by SGMP staff, Mother Nature gave cool favorable conditions – without these components preceding the racing, the world-class performances never would have happened, so hats off to the Man Cup sanction and South Georgia Motorsports Park for everything!

As for the events that happened during the Man Cup World Finals, here’s what some of the best racers in motorcycle drag racing did with the great conditions presented them, as deemed most memorable by the racers and fans of 2017.

The last pass of Pingel Top Fuel motorcycle competition in 2017 was without a doubt the single most memorable pass by a drag bike, arguably the most awesome pass in drag racing, ever witnessed by racers and fans alike. At 7:04PM, on Sunday night, November 19th, 2017, Larry McBride, of Newport News, Virginia, stopped the SGMP timing system, with the scoreboard in his lane showing a 5.611 elapsed time pass at 249.49 MPH. That run was/is the quickest pass in drag racing history ever recorded by a Top Fuel motorcycle. There was total bedlam on the starting line and grown men did cry when it happened. 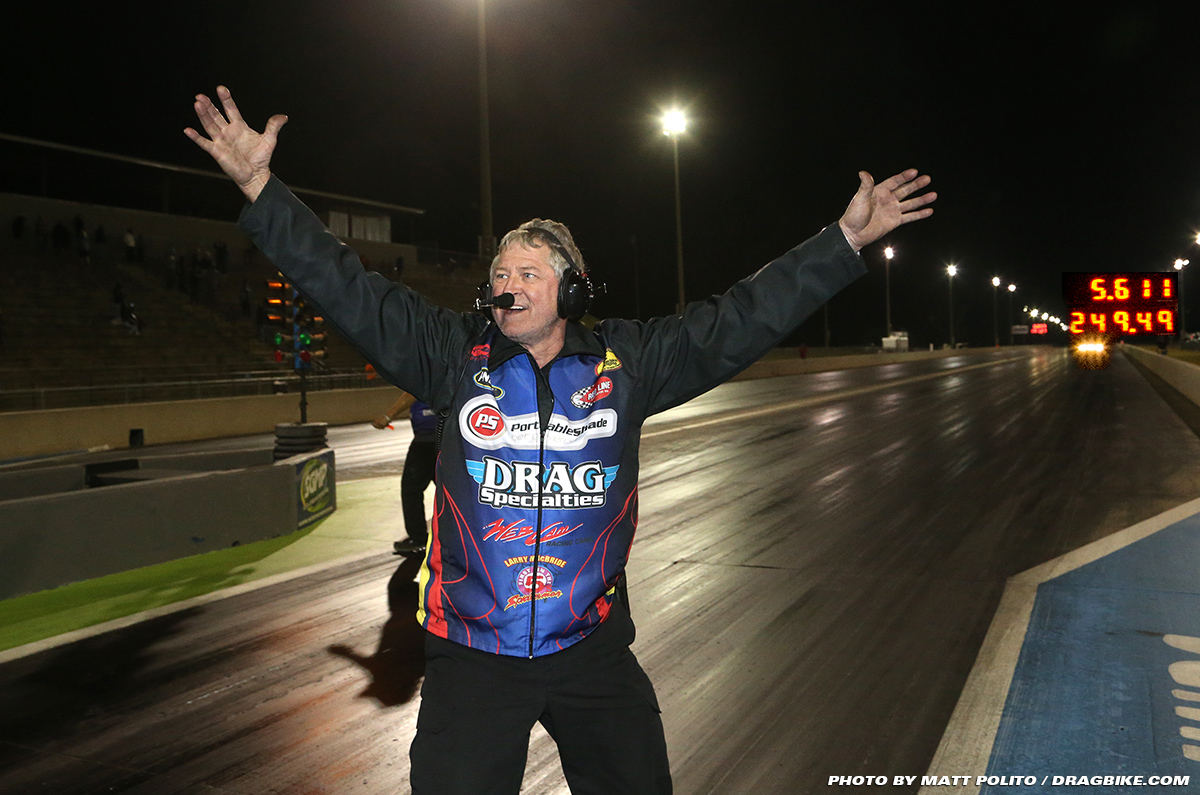 On the return road, when Larry took his helmet off and heard what he’d done, he too was overcome by emotion and stood there crying too. Man Cup sportsman racer Boo Brown, booted up the return road to congratulate Larry, after seeing his numbers and there was Larry, tears rolling down his cheeks with a grin that Mike Tyson couldn’t knock off Larry’s face. Boo recalls, “He was just overjoyed. All that adrenalin from riding the motorcycle, then finding out what he ran, well, there he was.”

Larry commented “They were happy tears. When you work so long and try so hard to do something, then you get there, you do it – sometimes it can get emotional. We worked so hard for that, we tried four different fuel systems on the bike in 2017 alone.” 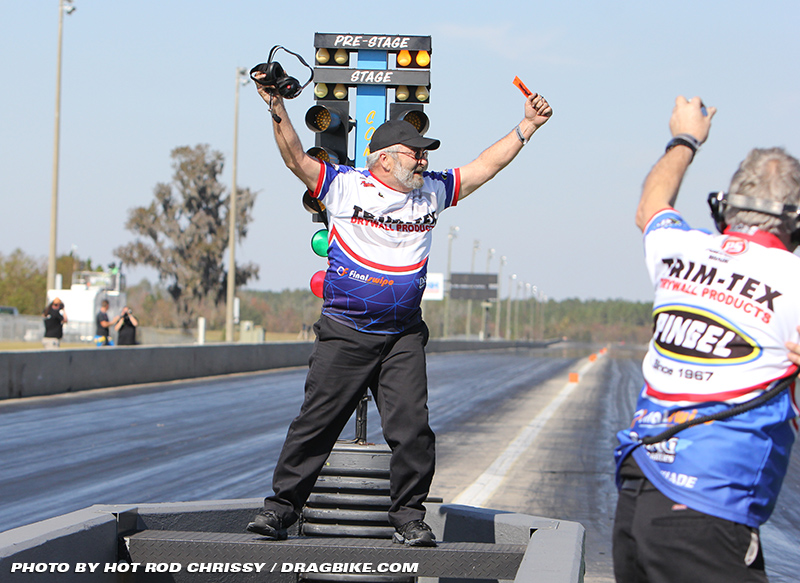 Larry McBride has been racing fuel bikes for decades, since the 1970’s in fact. He’s been racing Top Fuel motorcycles on asphalt since 1980. He’s seen a lot, more than most men can handle to tell you the truth. He’s seen things no one else wants to see, like his femur sticking through his leathers for example and his best friend make a pass and not come back from that; yes he’s seen that too.

Yet through it all, Larry “Spiderman” McBride has assembled undeniably the toughest team to beat in Top Fuel motorcycle drag racing. With that team, together they have built the quickest (5.611) and fastest (258.27 MPH) Top Fuel motorcycle on planet earth.

What made Larry’s historic run all the more impressive was that when he made the actual pass, no one and I mean no one expected it. The run was at 7 PM, dusk was well in progress, the temps were falling fast, it was cold out to begin with; over 90% of the experienced racers present knew Larry would either blow the tire away at the hit – or go like hell. Well we all know which way that went! 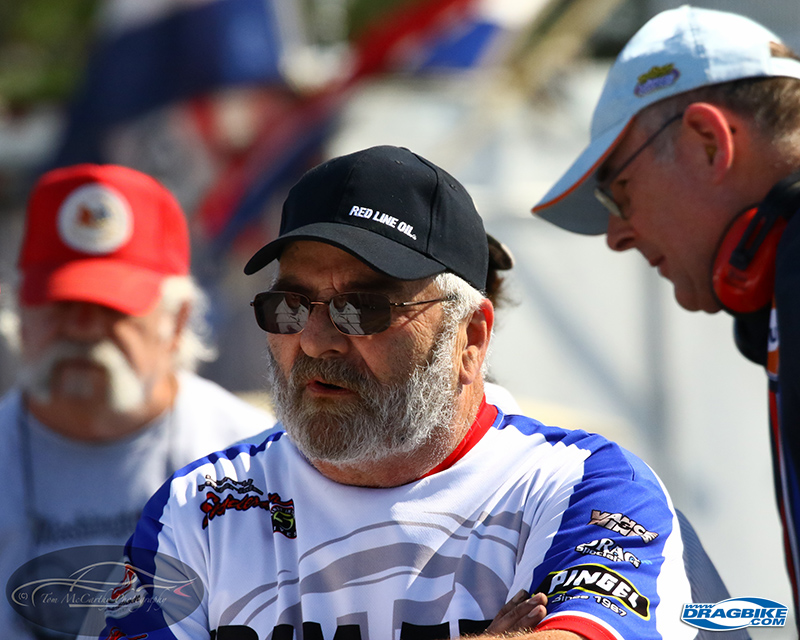 There were many memorable moments at the greatest motorcycle drag race of the decade, Larry’s was most memorable. But his big moment had very worthy competition from Kirby Apathy who races in the Pro Fuel class.

Another piece of motorcycle drag racing history that happened during the Man Cup Mann Hill Garage World Finals occurred at 12:59PM, on Sunday afternoon, November 19th, during round one of Hawaya Pro Fuel class racing. Racer Kirby Apathy, of DeLand, Florida, while racing Terry Stewart stopped the timing system at SGMP with a 6.855 @ 183 MPH up on his scoreboard. Kirby brought the Pro Fuel bikes into the six-second elapsed time zone.

Interestingly enough, when it happened, for a few brief seconds the place went silent. It was a stunned silence, no one quite knew what to make of it, people just stared in disbelief at the number on the board as if to imply, “Does that say what I think it say’s?” Then the starting line erupted and the cheers rang out “He did it!” Seeing was believing: the numbers on the scoreboard did not lie: Kirby Apathy had just run the first ever six-second elapsed time in Pro Fuel motorcycle drag racing history. This is an accomplishment of great magnitude for the Pro Fuel Nitro Harley racers.

The modern-day class of Pro Fuel is a descendant of the Pro Dragster class that has its roots in the 1970’s of motorcycle drag racing. Basically, a Pro Fuel drag bike is a nitromethane fuel based class with a small displacement motor, one carburetor only allowed and no transmission, all bikes are direct drive.   The combination has mired in the 7’s for a very long time. In the year 2000, 7.40 elapsed times were great and I’ve noted at least one competition run of 7.21 from the 2003 season. Low 7’s have been winning numbers throughout the last decade.

Just one year prior to the Man Cup World Finals, the 2016 version of the event featured Kirby Apathy and Michael Ray, driving Johnny Vickers “Terminator” Pro Fuel bike and they traded 7.0 passes that weekend convincing everyone the “6” was going to happen then – but it didn’t. You see the conditions need to be exactly correct for a carbureted bike to be able to make that kind of power and the track has to be exactly right as well to put the power to the pavement. The remainder the 2016 World Finals never presented that combination to the contestants again and for the next 51 weekends, it didn’t happen either. The whole of 2017 had to expire and bring the racers back to Valdosta a year later for the combination to present itself again. When it did, this time, the magic happened.

It was round one of eliminations and Kirby was in the left lane at SGMP and he hammered it. Just after the first 30’ of race track, his front end rose up and it just dangled there past half-track. When it set it down, Kirby stayed right in the groove and suddenly there was the number up on the scoreboard.

In remembering the run, Kirby recalls, “I knew it was better than my 7.04 I ran in the last round of qualifying. The bike left harder than it ever did before, but I was still very surprised when Mike Ray told me I ran a 6.85. The track was very good so we threw a lot at it and luckily the track held it. “

What made this a bit special for Kirby was he did this with his own motor of his own design and creation, his “Gunfighter.” Kirby’s creation is different from your average V-Twin in that he has giant Timken bearings supporting his 3-piece crankshaft. In 2015 he brought the motor to the track for the first time and it gave him a 7.60 ET, first pass. The Timken bearings help the lower end have a better crank-life which means less maintenance at the track. Kirby credits Larry Janczak, his CNC man, for doing a lot of work in helping him create The Gunfighter and giving vital input during the design phase of the project.

There were many stellar moments in 2017 motorcycle drag racing that thrilled racers and fans alike. But Larry’s 5.61 and Kirby’s 6.85 were head and shoulders above the rest. Jaska Salakari’s 6.01 on a Top Fuel Twin, Tak Shigematsu’s 6.02 on a Top Fuel Harley, Frankie Stotz 6.70 on a Pro Street Honda, Rodney Williford’s 6.66 at Rockingham, Pro Mod’s in the 3.90’s. If the happy ending to the 2017 season is any indication of what’s to come in 2018: get your cell phone cameras ready!