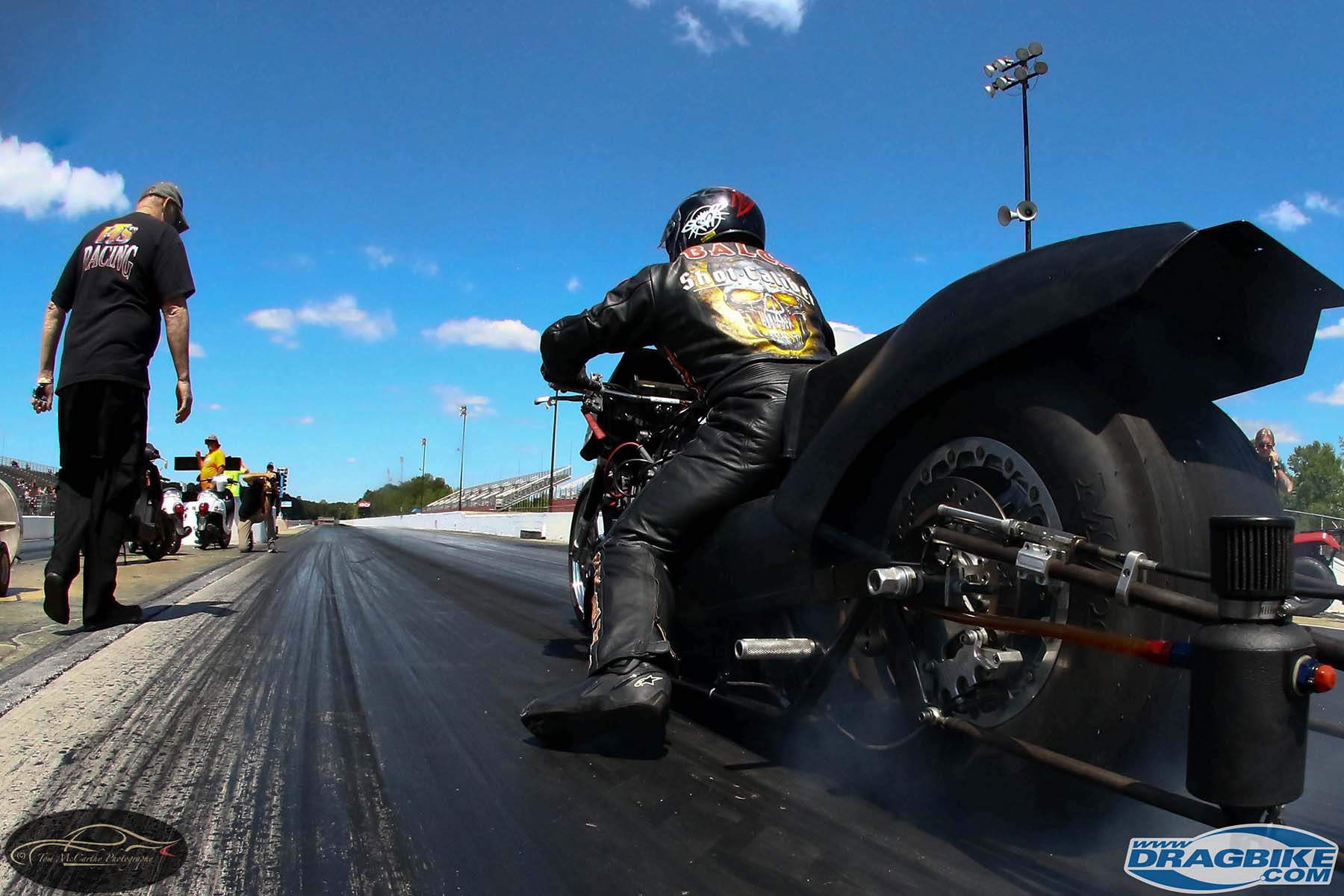 As the month of noisy November rumbles on, the sounds of nitromethane will reverberate through the winter months, if not longer, as the big nitromethane Top Fuel motorcycles come out for one last blast down the 1320. The thunder began with the loud pipes emanating from the legendary drag racing surface of Gainesville Raceway on the weekend of November 5-7, as the AHDRA closed out its 2021 season.

The weekend was fraught with rain pouring down for the first two days of a three-day season-ending World Finals. With a herculean effort, the staff at Gainesville Raceway had the track ready for racing at 10am Sunday morning for Bill Rowe and his AHDRA crew. Right at 10 on the dot, racers were hurling down the 1320 and by 11am, pre-race actions were rolling forward. 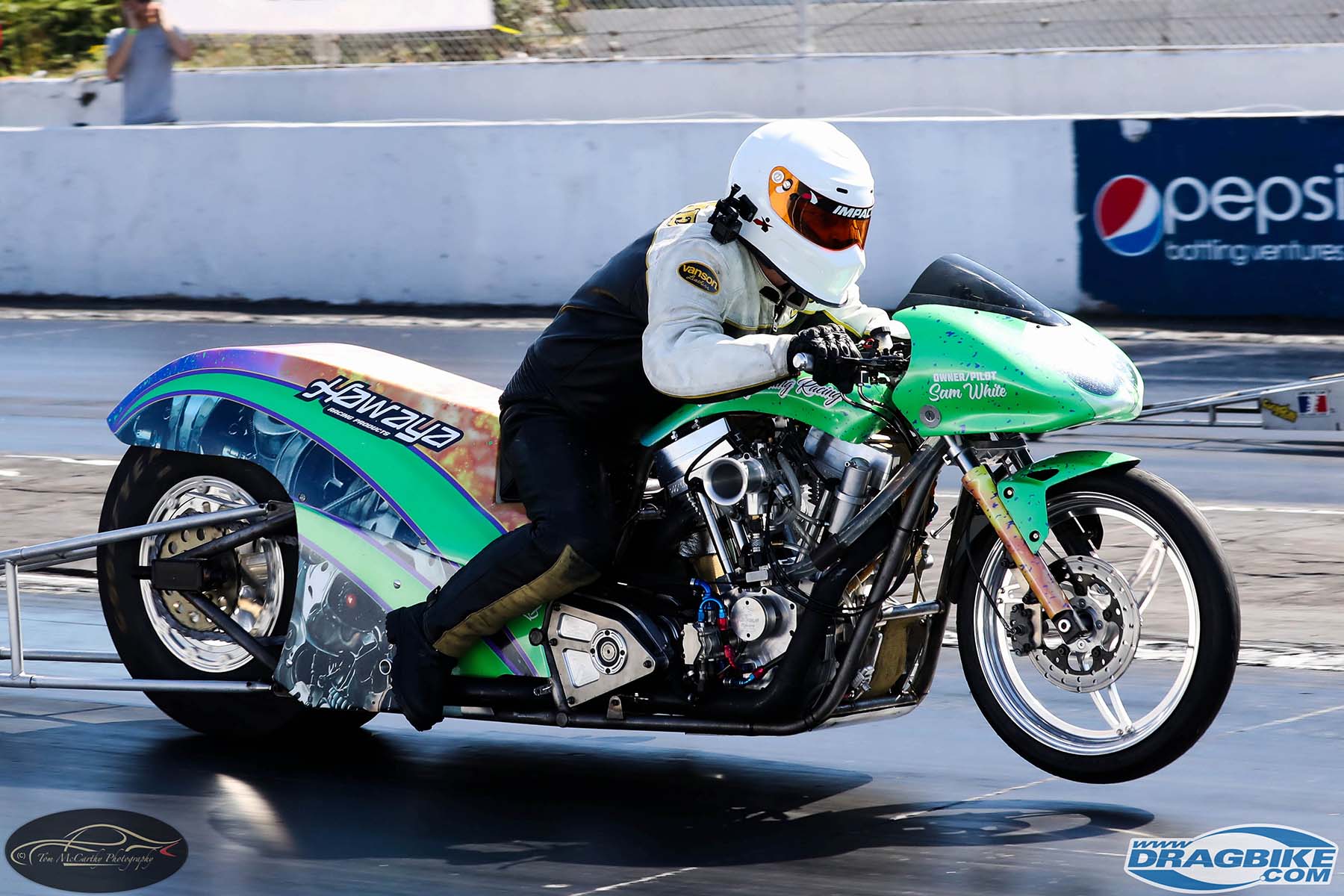 By 12 Noon, there was nitro in the air. Hat’s-off to the AHDRA as they managed to squeeze a three-day race into one day and crown their champions on Monday at their season-ending banquet, which was well attended by the AHDRA faithful. 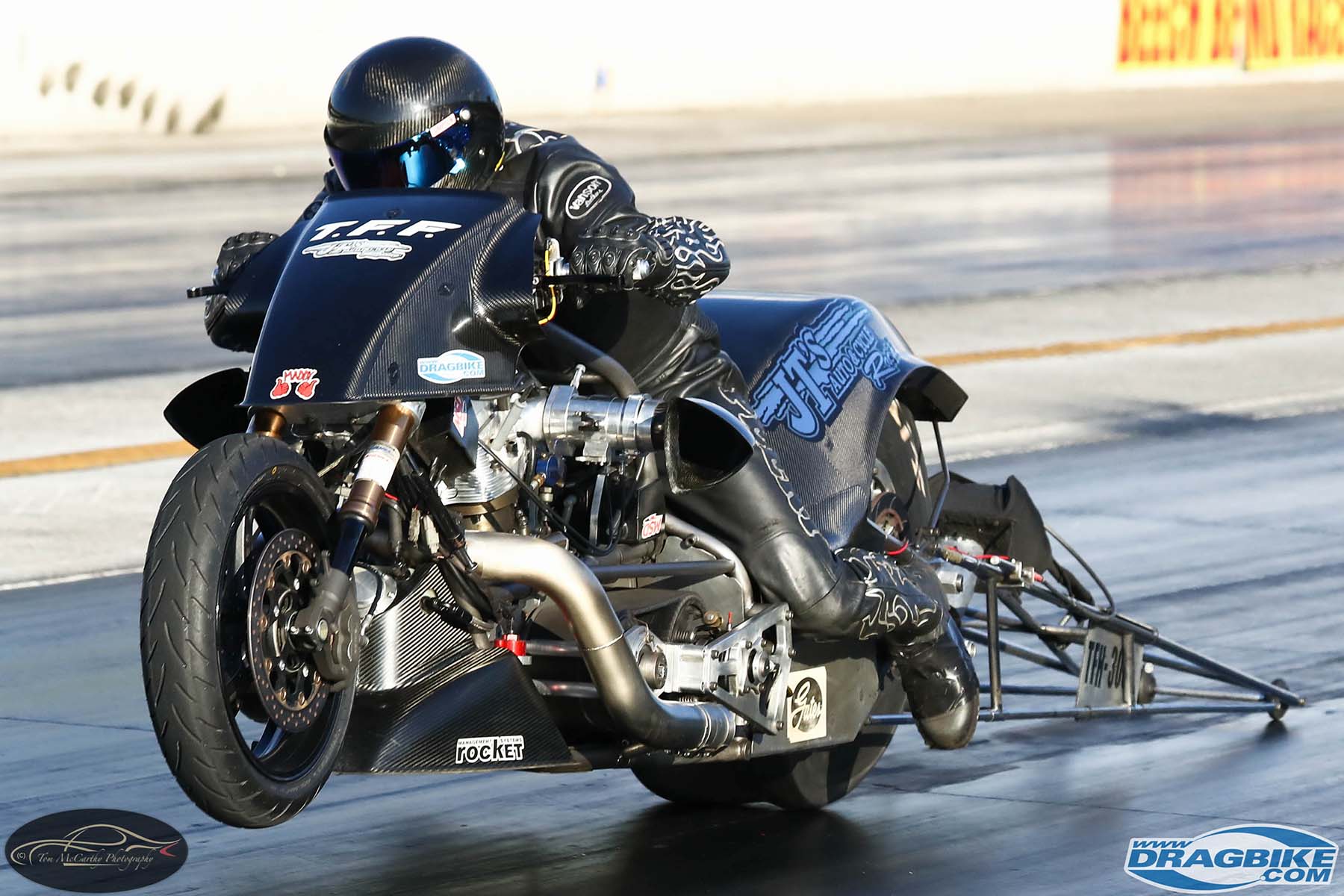 The AHDRA Champions for the 2021 season by class are: 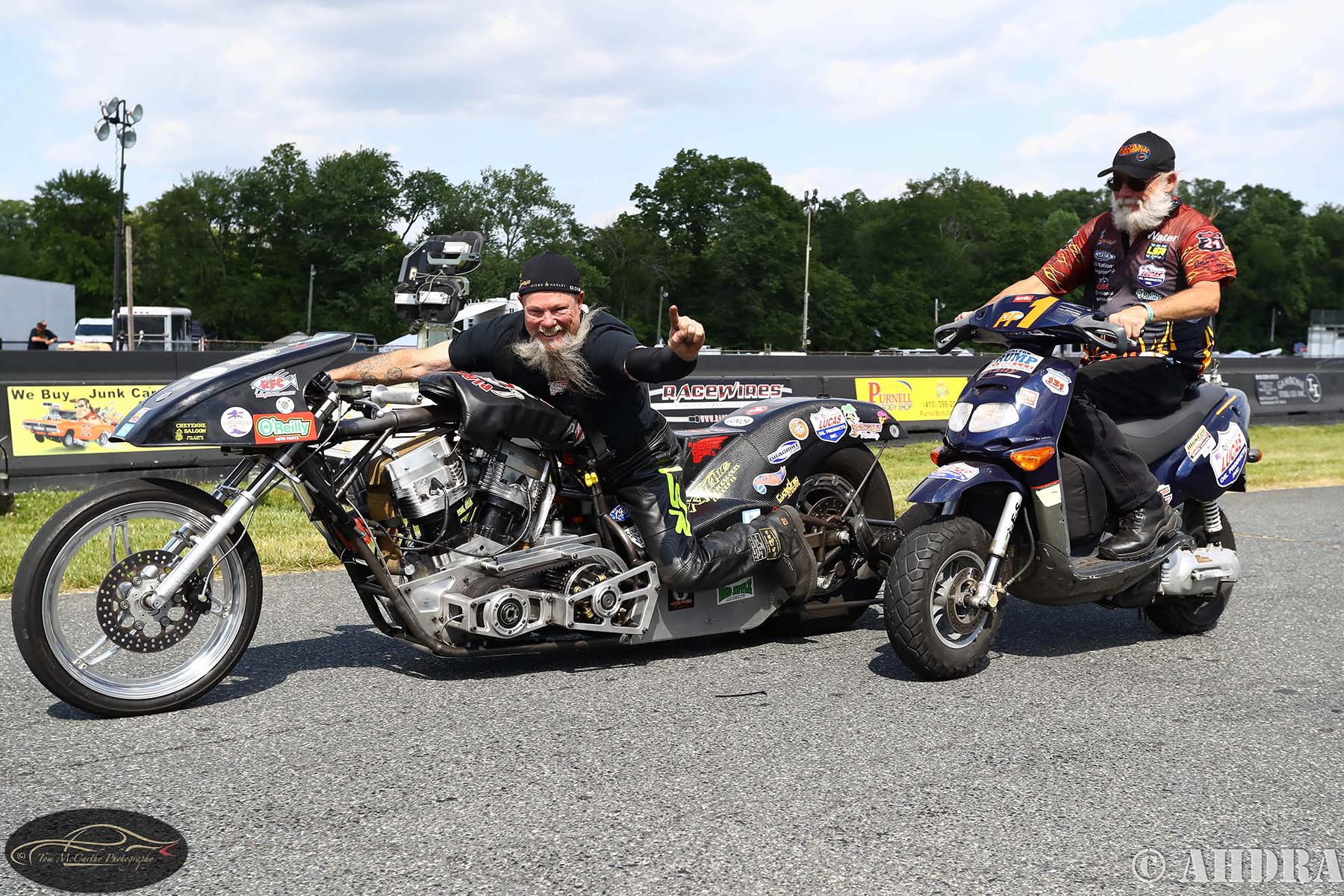 On the same weekend of November, the fantastic Maryland International Raceway facility in Budds Creek, MD hosted its annual WCF event, including the amazing Pro Street machines of the XDA. 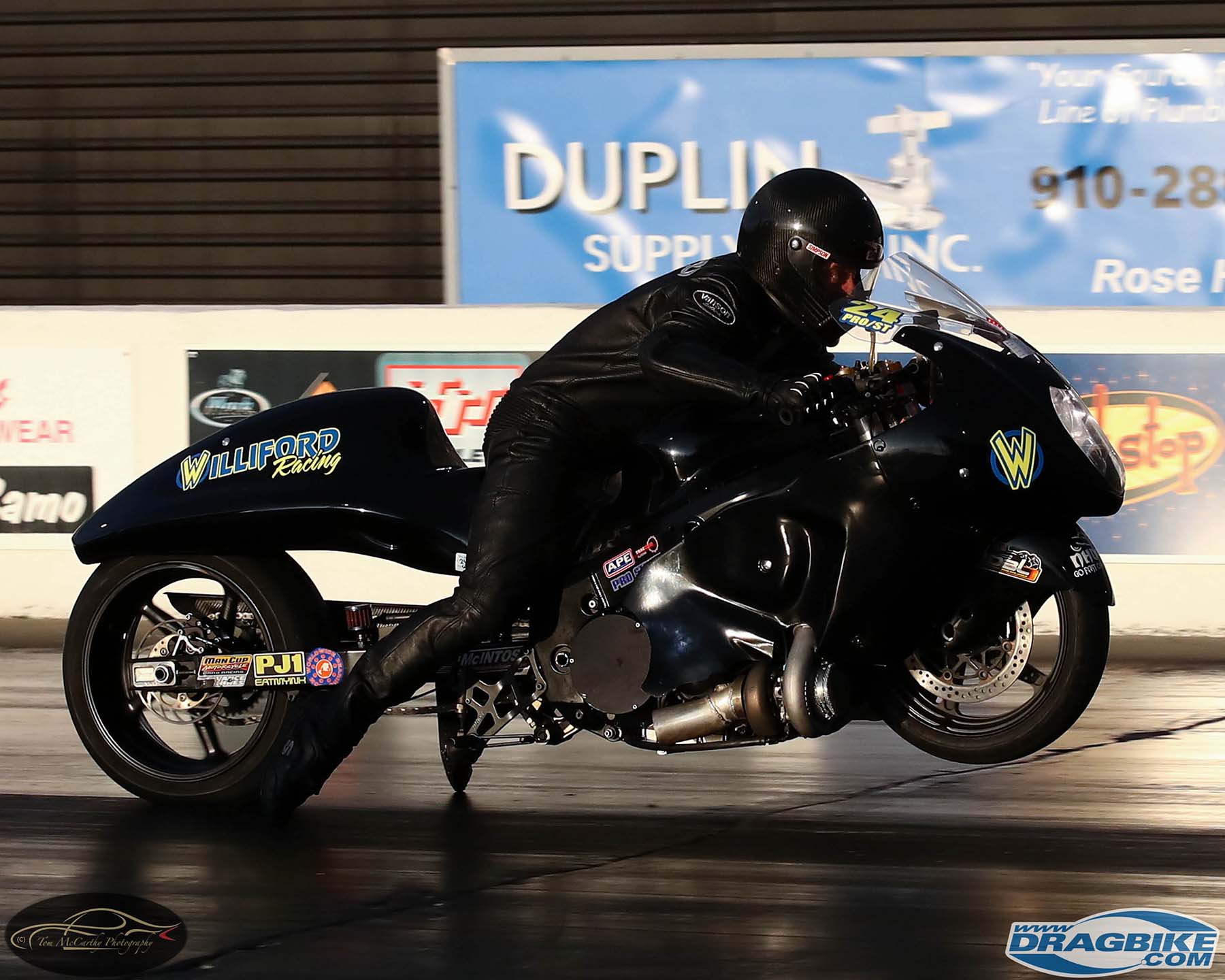 With forty thousand fans in attendance over the three days of racing, they witnessed Rodney Williford, take the #1 qualifying position with an 6.446 ET at 229.12 MPH. Williford took the win in the final over Darion Payne. But the stand out performance of the weekend came from Greg Wallace who ran a record-breaking 236.05 mph in the semi-final to become the ‘World’s Fastest No Wheelie Bar Motorcycle’!!

More Nitro will be found by racers and fans attending the Man Cup FuelTech World Finals, presented by Wiseco Pistons next weekend at South Georgia Motorsports Park. Mitch Brown, driver of the Denis Bradley Top Fuel Motorcycle has confirmed that he and Sam Wills will definitely be going full throttle in Top Fuel motorcycle competition. Dave Vantine and his yellow-bullet (5.71, fourth quickest in the world) will be testing early and going for the gusto. Alongside the aforementioned machines will be Chris Hand with the legendary Red Neck Express seeking his next five-second elapsed time. 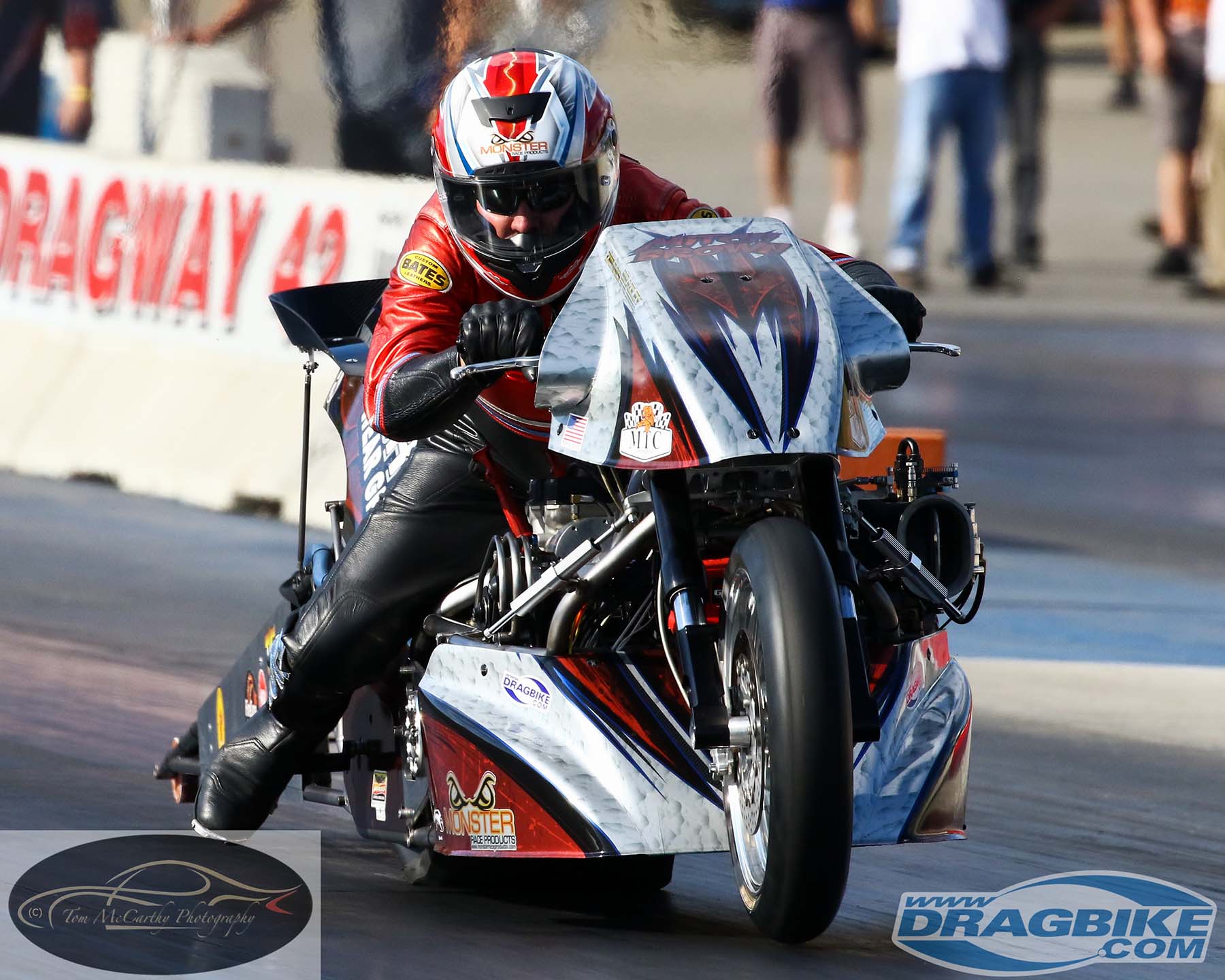 An important change to Top Fuel and Pro Open competition rules last month. The premier Top Fuel motorcycle drag racing class, effective immediately, will only allow “traditional blown, nitromethane and Top Fuel Twin” motorcycles into Top Fuel competition. Also, in the class of Pro Open: all events of competition, from this race forward will be contested to the eight-mile only.

Competition during the Man Cup FuelTech World Finals will include Top Fuel, Pro Open, Pro Mod, Pro Street, Real Street, 4.60, Top Gas, Super Comp, Street Fighter, Pro ET, V-Twin and Street ET. Of note, this will be the first Man Cup race, in the 11-year history of the sanction, that Larry McBride will not be in competition.

Larry McBride, the most prolific Top Fuel motorcycle racer of our lifetime, will not be in competition at the Man Cup World Finals this year. While Larry and his older brother Steve will be in attendance, 2021 is the first and only year, Larry has not been able to make a pass on his Top Fuel motorcycle. Larry suffered a long time with painful knees from a 40+ year career of racing fuel-burning drag bikes, and this necessitated him undergoing two knee replacement surgeries this year. 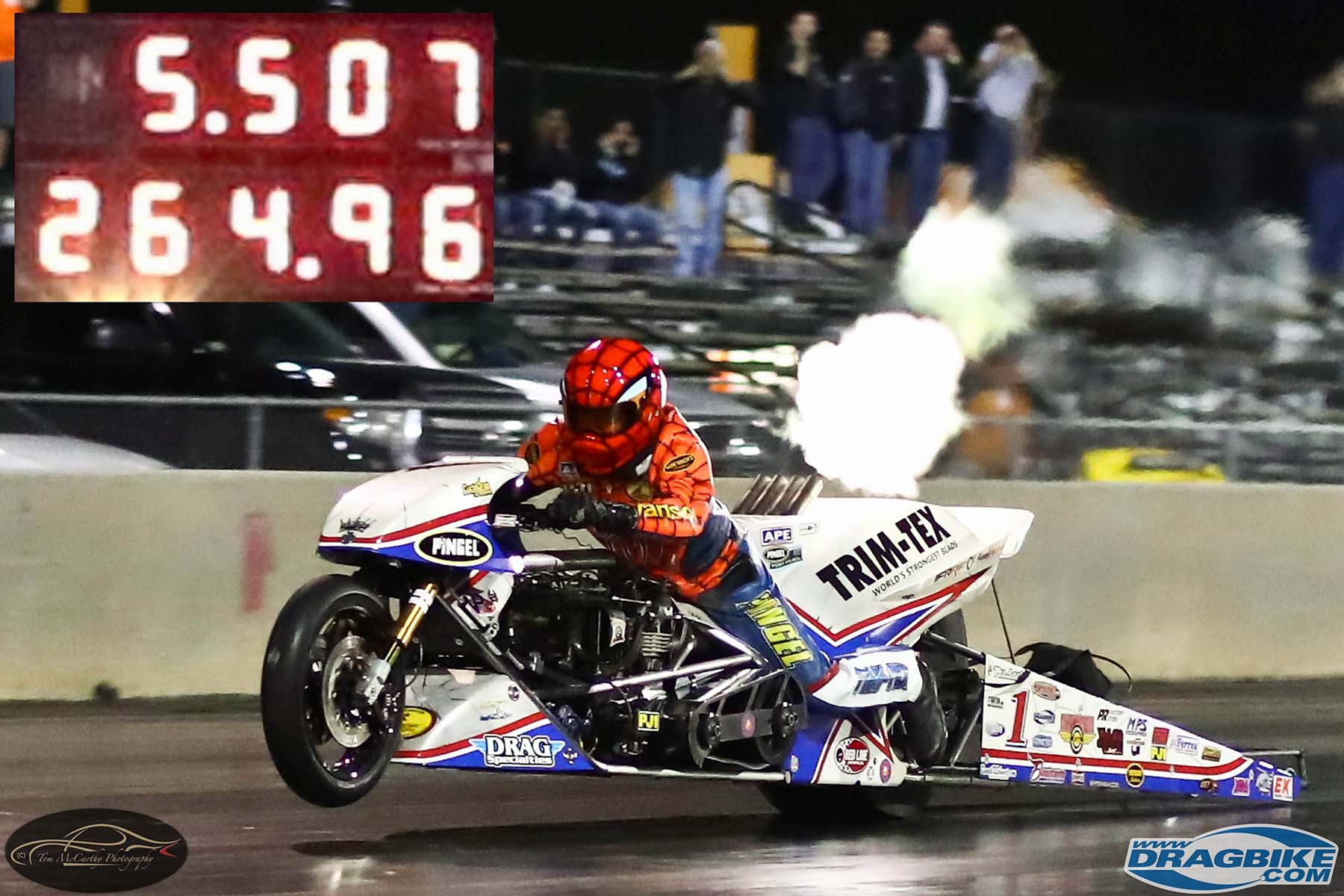 Larry’s surgeries were followed by health complications, requiring repeated trips to the hospital. While “the Spiderman” is in much-improved spirits, it has been decided that Larry is best to continue his fitness program and work towards a full recovery for the best effects on his long-term health.

In other important Nitro News, from across the Atlantic: Top Fuel motorcycle standout from the European Theater of competition, Mr. Filippos Papafilippou, sometimes affectionately known as “Flying Phil” has recently announced that his Top Fuel motorcycle, once owned and operated by Ian King, is now FOR SALE. The highly successful Gulf Oil bike created and refined by Ian King, the quickest bike on the European continent with an outstanding 5.66 elapsed time in the quarter-mile is now up for grabs.

When reached for comment, Flying Phil responded by indicating, that due to family priorities and business concerns, at this time, his focus needs to be home & hearth. He also indicated his desire to more closely attend his business interests, at least for the next three to five years. “And it would be a shame to have one of the world’s quickest Top Fuel motorcycles sitting, collecting dust, when it should be out there continuing to set new records and winning races.” So with that in mind, the great bike is now available, as is its creator: Ian King. 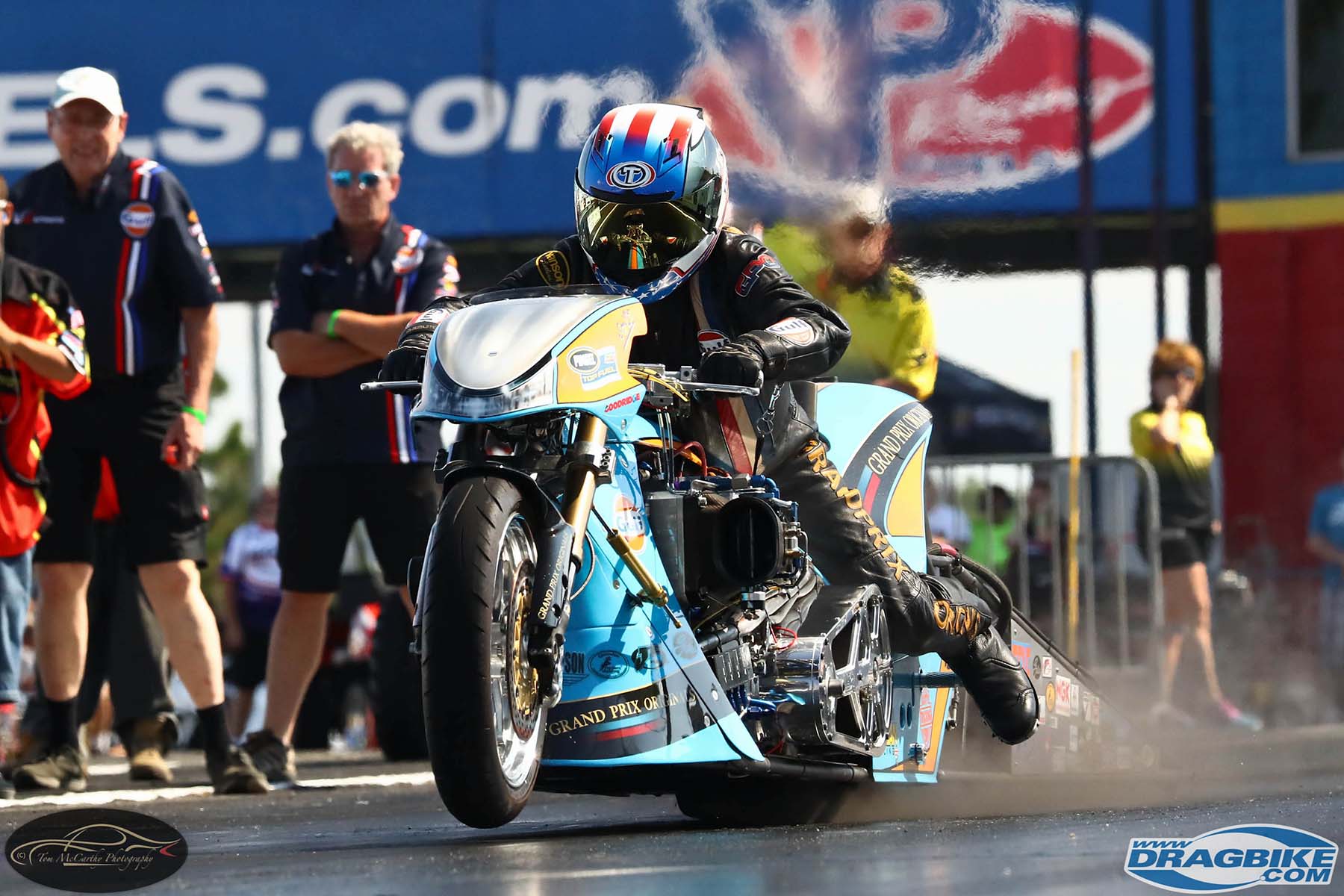 Ian has informed Dragbike.com that he is obviously, at least for the moment, without a Top Fuel ride and is available for hire. Clearly, anyone with the financial wherewithal could, in theory, purchase Mr. Filippos Papafilippou’s motorcycle, hire Ian King and his veteran teammates and contend for a championship in Top Fuel motorcycle with a proven mid-five-second, Top Fuel motorcycle.

Also of great interest to Top Fuel motorcycle aficionados, there are, as of this writing, no less than three NEW inline-I-4 Top Fuel motorcycles delivered and in various stages of preparation for 2022 competition. Jimmy Brantley’s created by the McBride’s at Cycle Specialist Inc, in Newport News, VA is now ready for Mr. Brantley to go forward with.

Another creation, fresh from the shop floor of Larry & Stevie McBride is the new Top Fuel bike created for David Vantine. Dave and his crew chief Greg Pollard have taken delivery of their new bike and it’s currently being outfitted, by Greg Pollard at his Nitro-Fab, shop in Canada.

Both motorcycles are next generation iterations of Larry McBride’s 5.50 – 264 MPH world record bike. Everything the McBride’s have learned in over 40 years of Top Fuel motorcycle drag racing went into these two new Nitro motorcycles.

The third new I-4 is a creation from the shop of John Alwine and is in the hands of its new owner Micah Fenwick of Maine. The bike sports a Race Visions Reborn chassis and an Alwine Top Fuel motor combination. This is the same basic motor and chassis configuration Korry Hogan last ran in competition to a 6.0 pass at 244 MPH. 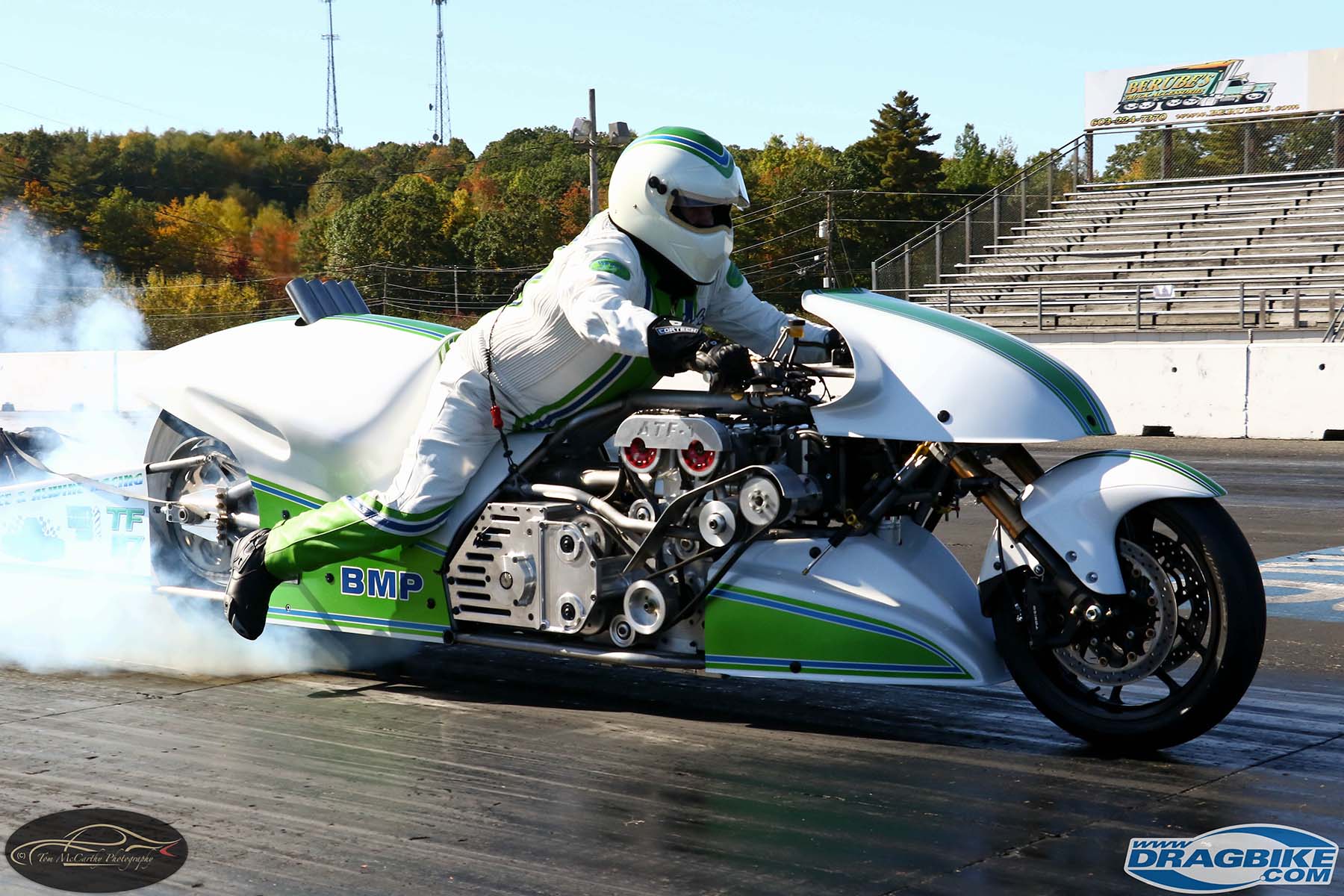 Fenwick has been taking the new bike’s testing in graduated steps as he is well aware of exactly what he has under him. He’s no stranger to high horsepower drag bikes and previously owned and raced with an inline-4 Top Fuel motorcycle.

Fenwick has zero intentions of just jumping on the beast and going out to try to rotate the earth. He is wise and knows it’s not time for that by a long shot. His eighth-mile testing numbers have already shown the bike is on-par with 6.0 quarter mile performance. Once he feels comfortable in the saddle and has his team solidified, he will move forward with his racing program. John Alwine commented recently in a phone interview “What I like about working with Fenwick is he listens to advice. He’s safety conscience and takes directions. He’s also very methodical, paying very close attention to details.”

Also, outside the realm of nitro news, on November 11-14, the Auto Club NHRA Finals will be run at the Pomona home track for the National Hot Rod Association. Going into the final event of the 2021 season, Matt Smith of Matt Smith Racing (MSR) is currently in first place of championship points with a slim 20 point lead over a hard-charging Steve Johnson, whos’ Suzuki has been causing quite a stir in the NHRA PSM (Pro Stock Motorcycle) ranks. Angelle Sampey is also only 30 points out and is also certainly within reach of the championship. 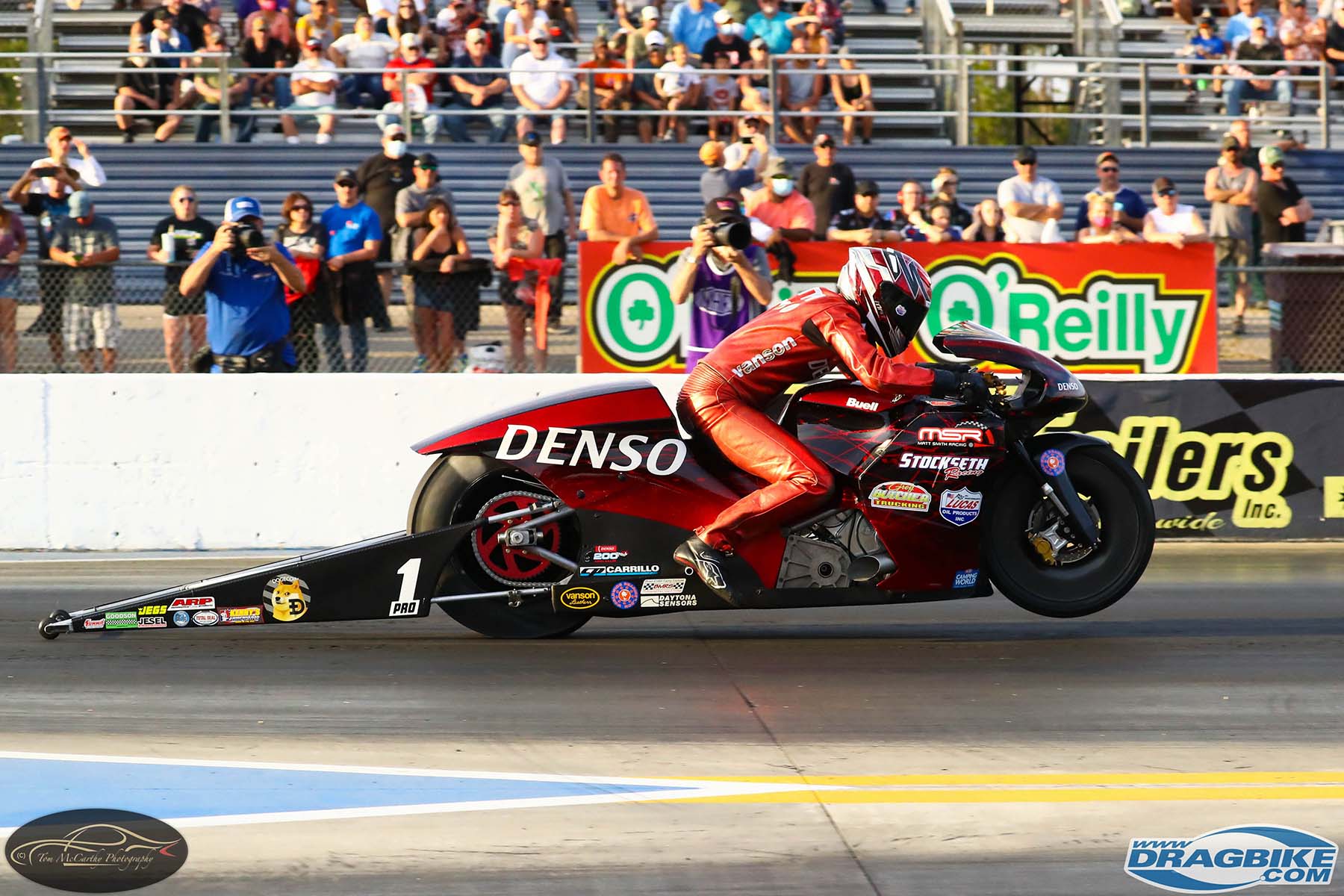 In his 34 years of NHRA PSM competition, this may be Steve’s best shot ever at winning a championship, because momentum counts heavily in every championship racing series. His win at the Las Vegas Strip, was a big one.

Also on the weekend of November 11-14 is the final event of the year for the Hog’s Gone Wild sanction. Known for their heavy competition in “Bagger” as their forte. Their racing will feature the points classes of Pro Street, Hot Street, True Street, Street ET, Street, and Non-Bagger. 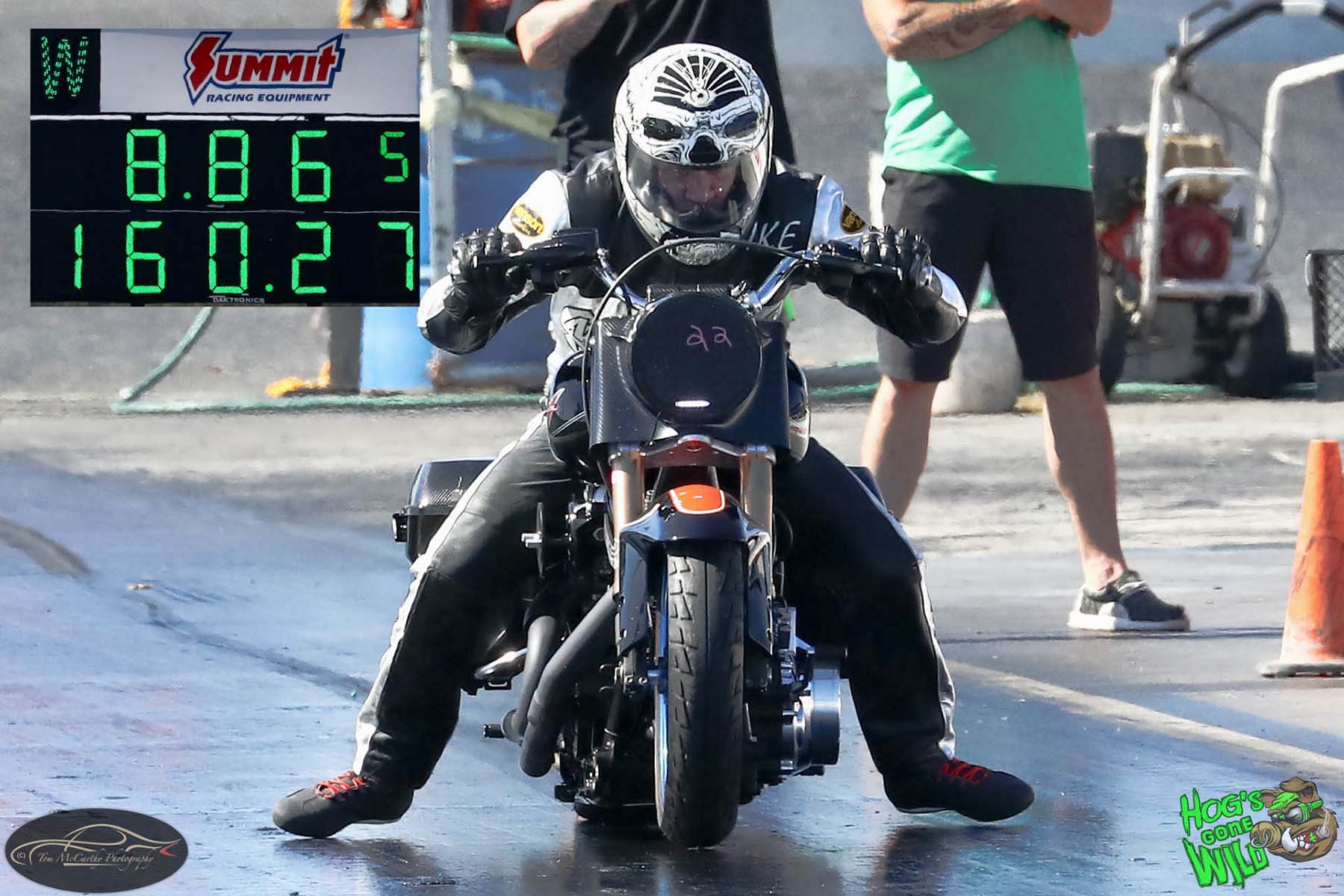 At their October event outstanding performances were turned in by Michael Beland, of A1 Cycles, with an off the trailer stunning run of 8.86 at 160 MPH. This puts to bed firmly the HGW Pro Street baggers, well into the 8’s. Another great performance was turned in by Marc Fricke in Hot Street class with his 8.96 @ 150 MPH to help him secure his second consecutive HGW Hot Street championship. Their final race of the season and championship banquet will be November 12-13, in Gulfport, Mississippi. 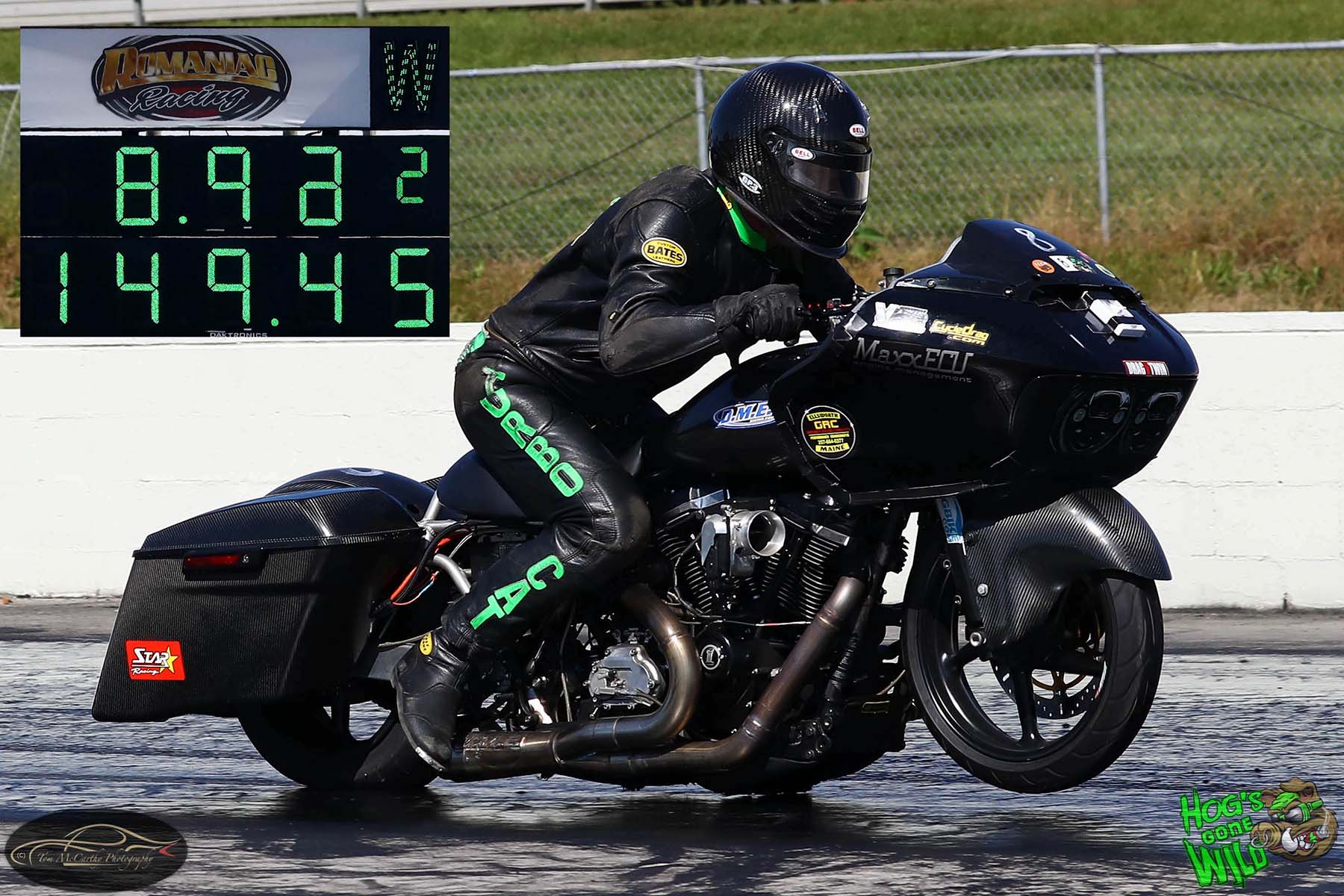