MPS ‘Rocket Science’ Debuts at XDA’s Running of the Bulls

MPS ‘Rocket Science’ Debuts at XDA’s Running of the Bulls

MPS unveiled their new grudge Hayabusa at the XDA MTC Summer Nationals this weekend in Richmond, VA with ace Richard Gadson at the controls. With only limited testing, we didn’t have super high expectations for the weekend. We just wanted to get a couple of solid passes in on a killer Jason Miller prepped race track.

We were scheduled to test on Friday, but with a work emergency for pilot Gadson, Friday testing didn’t happen. We had two shakedown passes to get competitive before round one. The first pass the bike drove left at the hit and Richard was forced to abort before hitting the wall. A wheel adjustment fixed that issue. Our last test pass the bike left like it was on rails. A world class 60 foot time and then it shuts off.

We thought we knew what the issue was and made some changes to the ECU program for our first round date with “Trouble Man”. We left hard and were out on “Trouble Man” until it quit again. It was disappointing to say the least. We have a Gremlin that we need to find and just didn’t have enough time to find it. All in all we made some progress and the bike will be competitive at the next race we attend. Thanks to Richard Gadson for his awesome riding and Wayne Palmer for all the pit help! 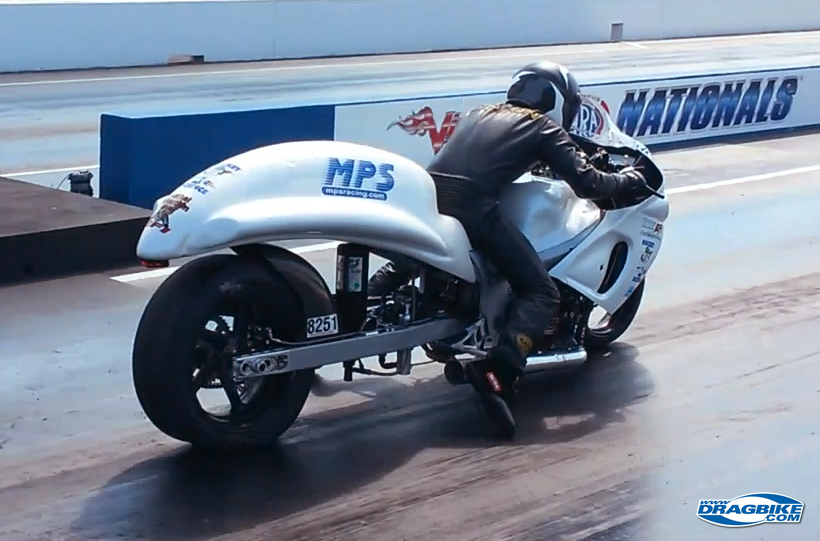 We would also like to thank all our parts suppliers without whom we could not race. Thanks to Rick & Doug at Holley EFI, Jay at APE, Billy at JE Piston, Bill at Robinson Industries, Kerry at Crower, Lori and Melissa at Web Cam, Mike at Cometic, Dave at D&G Chassis, Kurt at Millennium Technology, Will at Kibblewhite Precision Machining, Carl at ARC, Eric at MTC Engineering, Dave at Worldwide Bearings, and Dawn at Bates Leathers.