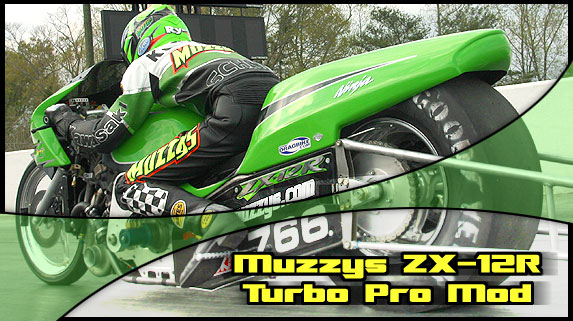 After wining the Funny Bike championship last year with their ZX-11 inspired, water-cooled entry, Kawasaki has proven that the late models are capable of surpassing the performance of bikes of the past. Rob Muzzy is hoping to reestablish that principle with his stable of 2003 ZX-12-motored drag bikes. “We are out to prove to that you can use a modern engine in drag racing and in fact, we believe that they are better than the old ones,” Muzzy said. 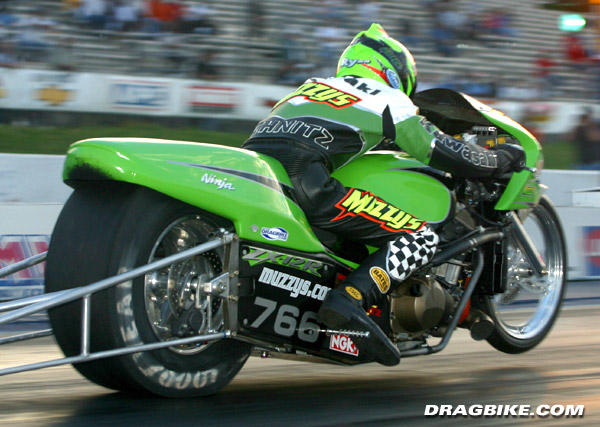 Muzzy debuted his turbo-charged 2003 ZX-12 Pro Mod at the AMA/Prostar Elmer Trett Nationals at Atlanta Dragway, from Commerce GA. This much talked about, revolutionary machine is more than a year and a half in the making.

“Somewhere in the middle of 2001 I decided I wanted to build this,” Muzzy said. “We talked to the folks at Koenig chassis and they built us a Low Boy that would accept a ZX-12 motor. We picked that up at the World Finals in 2001, so the concept has been in place for a while. The next thing that held us up a little was the transmission. We had Weisman build us a one, which took almost a year. We had to make the new Pro Stock bike the number one priority and we were pulling guys off the Pro Mod to work on it, so it was a pretty long process. The good thing about waiting all this time, is that we had embarked on our ZX-12 Streetbike Shootout project, so we learned a lot about the tuning and engine management.” 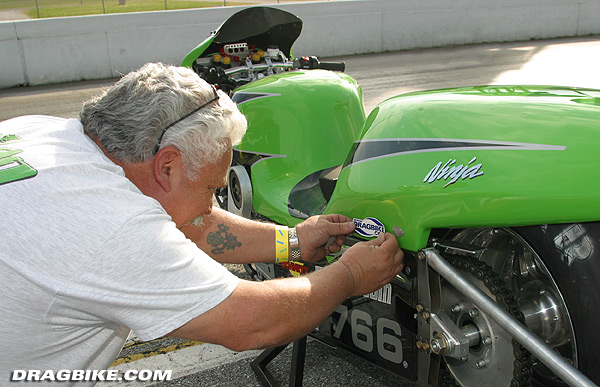 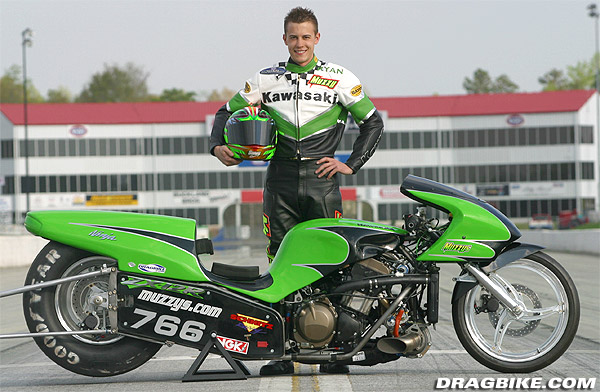 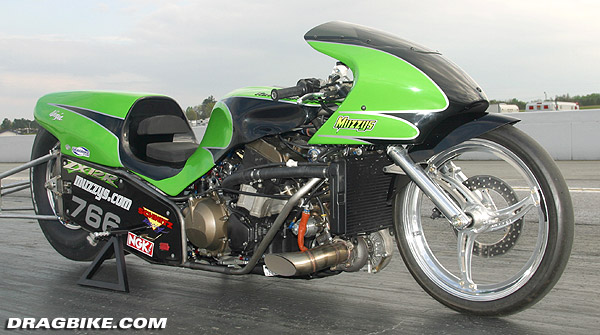 The information gained during Rickey Gadson’s learning curve with Shootout bike turned out to invaluable to the Pro Mod project. The engine in Schnitz’s bike is actually a back-up Shootout motor that Gadson utilized last year.

“That motor is identical to the one in Rickey’s Shootout bike,” Muzzy said. “The only difference is the transmission.”

In their very first outing, Muzzy and rider, Ryan Schnitz, qualified the bike in the number-one spot with a swift 6.83 at 196 mph. Schnitz, who has ridden numerous diverse motorcycles in his short racing career, was able to compare the Pro Mod to other bikes.

“The bike accelerates much quicker than a Shootout bike because of the slick and wheelie-bars,” Schnitz said. “The thing goes down the track super smooth. I’ve never had any handling problems. On the 83-pass it went straight down the track like a bullet.” 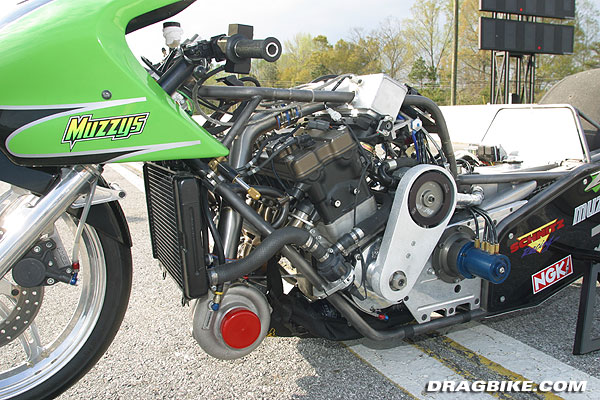 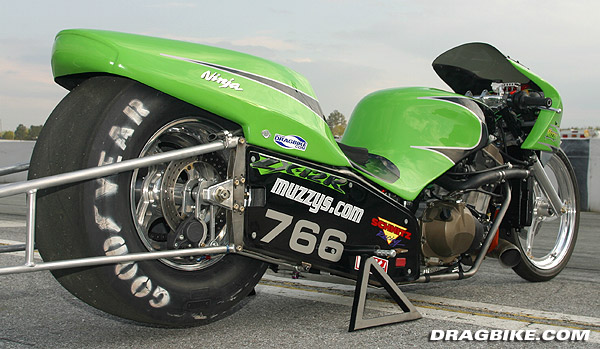 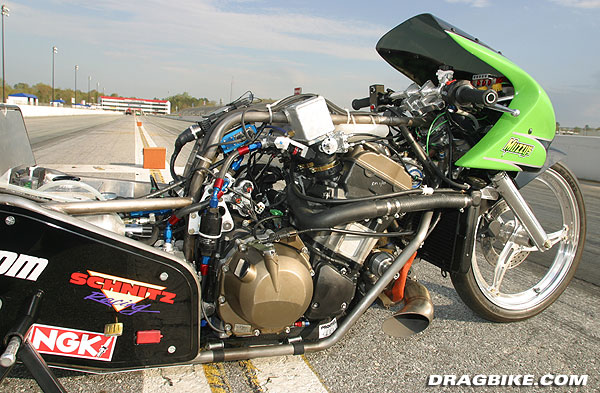 Muzzy hopes that the consistent performances of the late-model bikes will prompt more racers into switching the newer motor.

“The purpose of this is to prove to people that we have absorbed the development cost to make this stuff work and everything that we are using is available to the public,” Muzzy said. “What I have learned about the guys in drag racing is that they either don’t have the ability or they don’t want to fund and take the time to develop something, so they don’t change. I can understand that, but I just want guys to realize that we have already developed the equipment and can make it go as fast as they want. I could tell someone right now exactly what they have to do to run 6.60s in Funny Bike, and it’s not very expensive and it’s available. Now if you want to go fives, you’re on your own, but other than that the new stuff can go very quick and it’s reliable.”

Muzzy and Schnitz would like to run the Pro Mod on the AMA/Prostar circuit as much as they can, but are faced with schedule conflicts from the NHRA. “We are going to have to make the Pro Stock the top priority, so unfortunately we will probably not be back to Prostar until Indy,” Muzzy said. 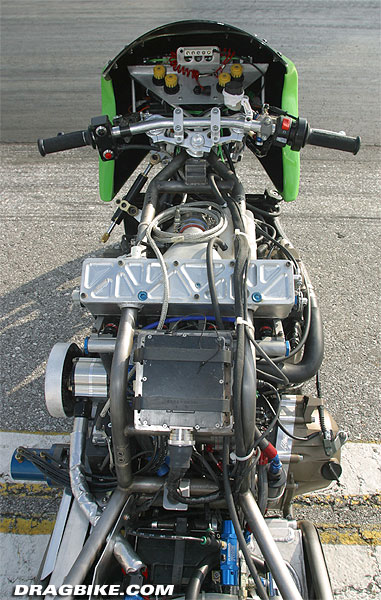 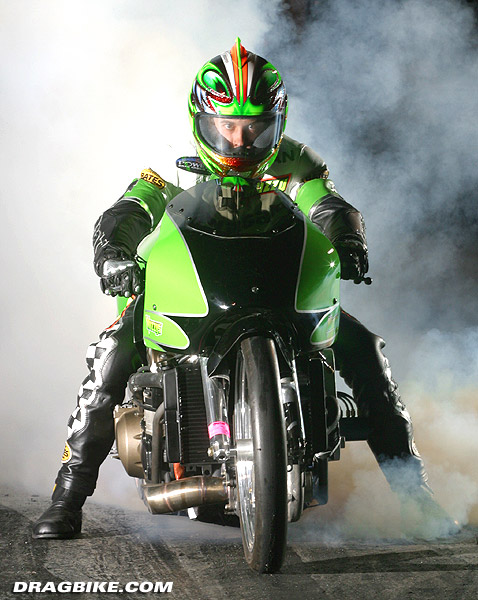 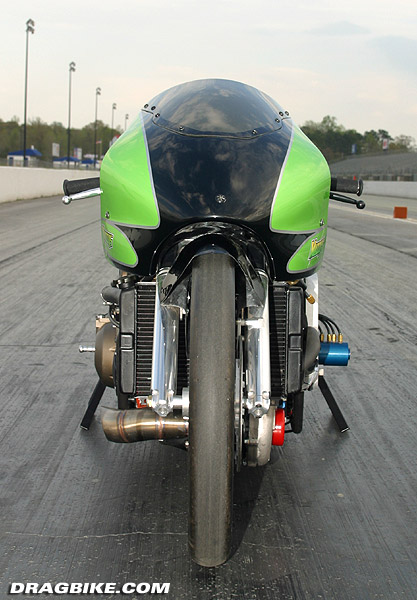