The venerable American Motorcycle Racing Association (AMRA) changed ownership over the winter, landing in the hands of four racers known as “The Pennsylvania Posse.” The new group had the first opportunity to show their skills to the biggest opening field in many years at their Spring Rally & Drags season opener on April 27-28 at Kentucky’s beautiful and nostalgic Beech Bend Raceway Park.

Former NHRA Pro Stock Motorcycle racer Chaz Kennedy made the nitro transition look easy on one of Walter Halonski’s LSR bikes. “My first nitro experience was in Rockingham two years ago. It’s safe to say the bike scared me and I struggled to get it down track,” a candid Kennedy said about that experience.

“Walter called and asked if I wanted to run the Bowling Green event, and everything lined up where I could make it. We didn’t get to test Friday due to the high wind, so we only got one pass Saturday before qualifying. 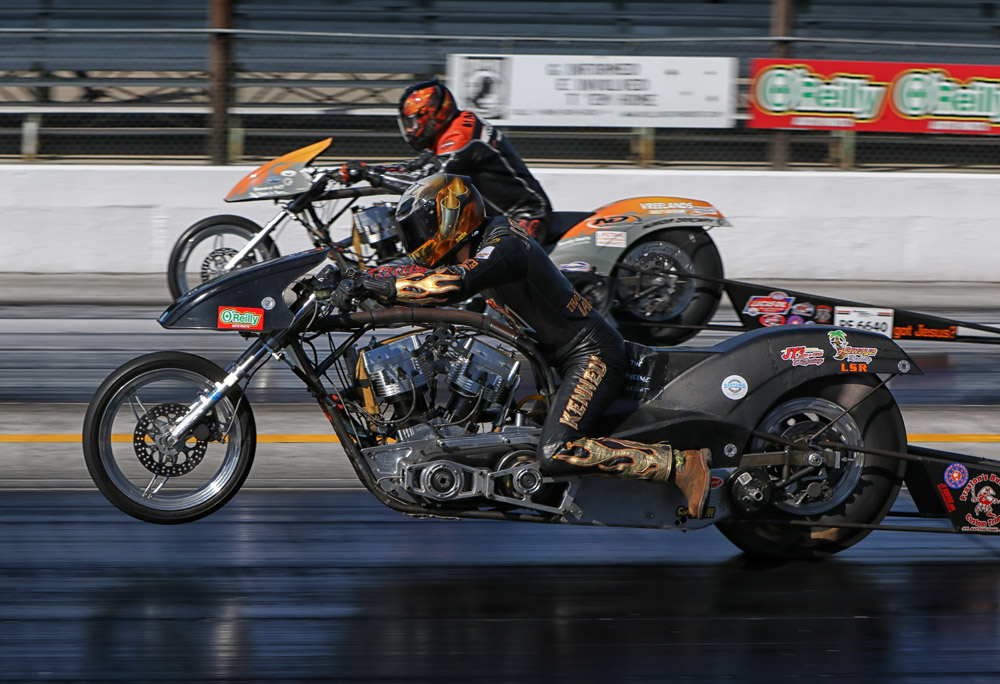 “The first hit was ugly but the rest of the weekend I made nice runs and improved every pass to qualify third.” Kennedy posted a 7.50 behind number one Jim Martin’s 7.39 at 168 mph.

“Sunday I had great races all day. None of the rounds were given to me, especially Janette (Thornley) in the finals. We left together and she passed me right before the 330 cone and I passed her back around the eighth mile. It was a great race.” Kennedy ran a 7.41 at 173.73 to Thornley’s 7.49 at 167.

“I’d like to thank Walter and Norine Halonski, and Preston and Sue Bartlett for giving me the opportunity to ride one of the best Pro Fuel bikes out there. Also Hawaya Racing, and my dad Chuck for his help turning the bike around all weekend.

“I definitely exceeded my expectations for the weekend and may have surprised some people. I’ll definitely be back to ride a fuel bike as soon as I can.”

In fact, the popularity of Top Fuel Harley at NHRA national events may be fostering a nitro growth spurt at AMRA, with a surge of nitro newbies on hand at Beech Bend.

Indiana duck farmer Don Ratliff took to the explosive fuel so easily that he led the first round of Nitro Funnybike qualifying on Red Rhea’s bike with a 6.93 at 182.7 mph—his first EVER nitro pass! Ratliff was even able to handle the bike with a loose oil line spraying the back tire in the shutdown area. “See?” said Rhea. “People shouldn’t be afraid of nitro!”

Ratliff eventually dropped to third in the order behind number one Ryan Perry’s 6.74 at 200. James Hoffman—also making his first nitro passes—put his bike in the field but used up his tires in the process and didn’t race on Sunday. 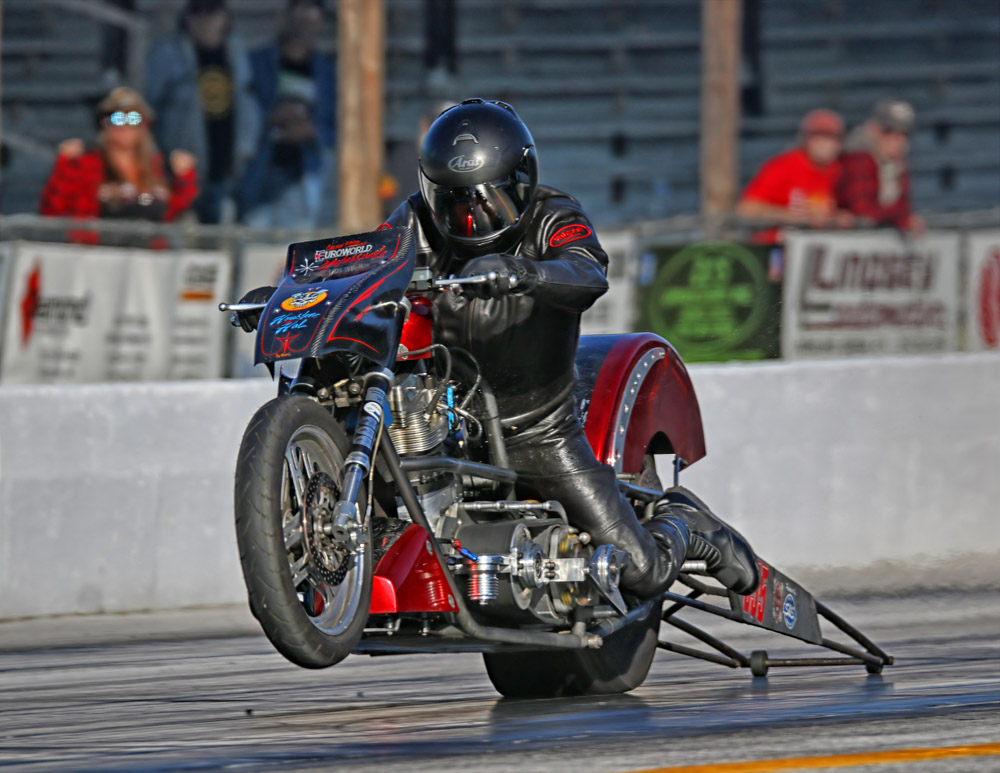 And Sunday is when the veterans took over, with “Houston” Hal Cort taking the final round win over Perry in one helluva race. The bikes left the starting line within .007 of each other and stayed neck-and-neck, with Cort’s 6.85 legging it out against Perry’s 6.87. 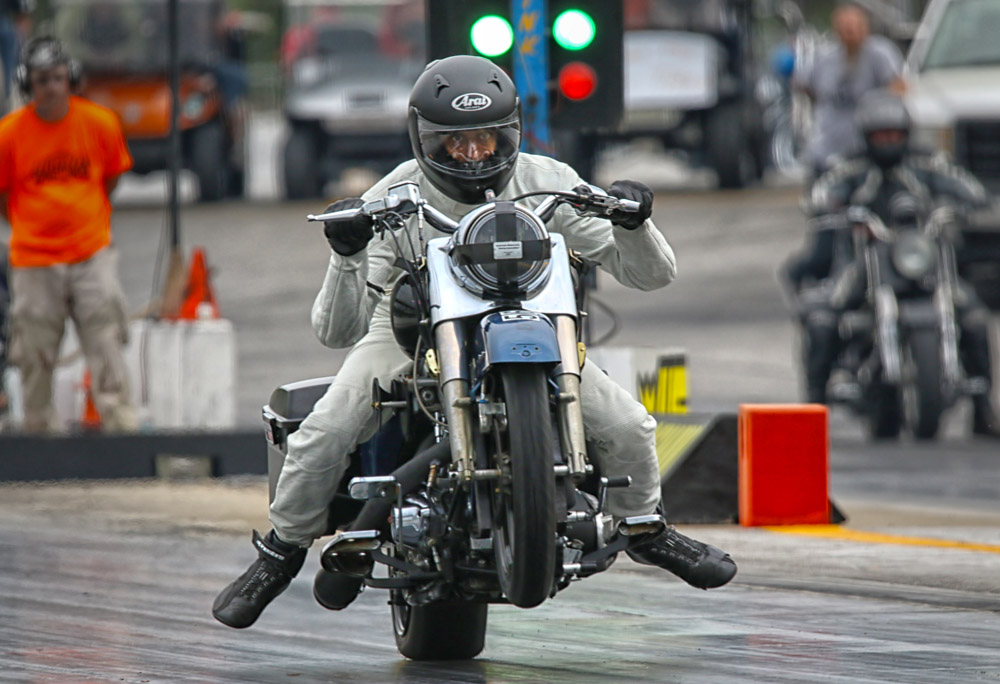 Assim Chaudhry swept the table in Energy One Dressers class, qualifying number one with a record 9.27 at 144 mph. Big man Chaudhry gave up the tree by .070 to final round opponent David Dennick but drove around for the 9.48 at 143 to 9.70 at 127 win.

“Assim came to us to get ‘The worlds Quickest Bagger’ built,” said GMS powermeister Gregg Dahl. “The one he set the records with this weekend (ET and both ends of the eighth mile) is a 1999 Road King with an uncut frame and front fork assembly. It has a 135″ GMS B2 engine with one of our in-house racing cams and our house EFI system, R&D transmission, and Bandit belt drive.” 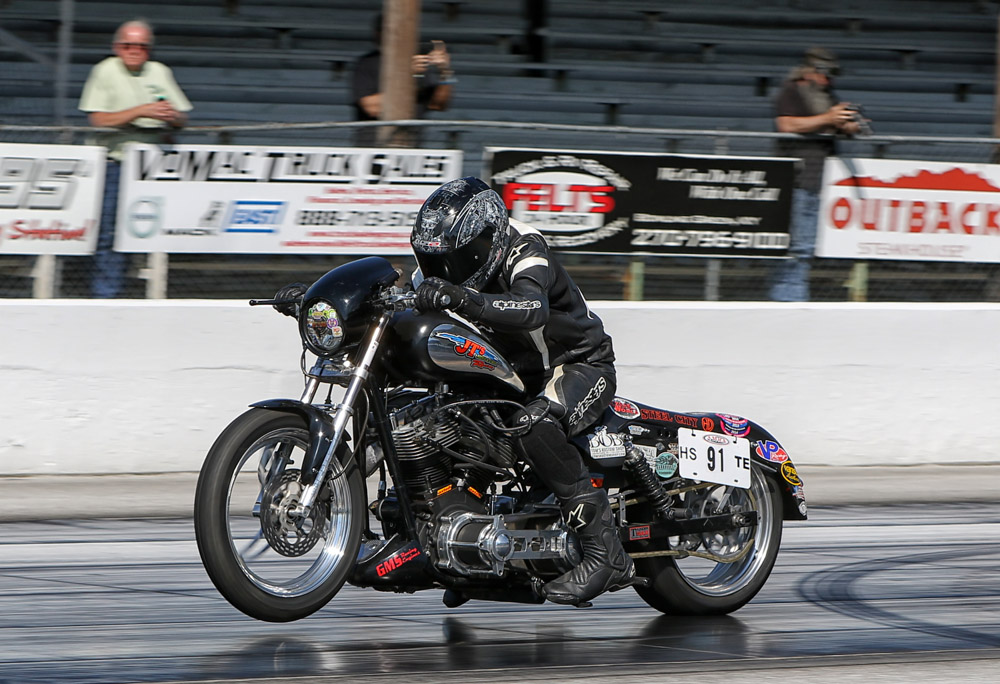 Ditto for Virginia’s Charley Douglass, who qualified number one with a 9.39 at 138 mph in Zipper’s Super Street and won the final against Joe Perry, who blew the tire away at the hit. 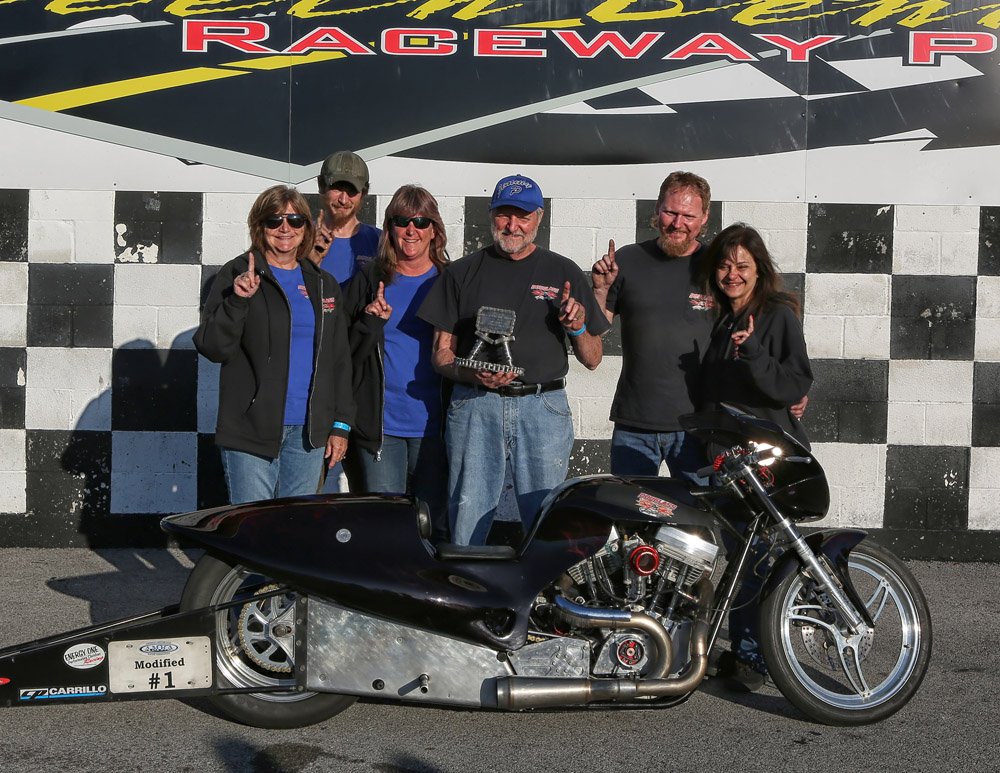 Number one qualifiers winning their class was clearly the theme of the day, with Michigan’s Billy Doherty taking qualifying honors in Pro Modified with an 8.45, then winning the final with a sweet .032 to .087 starting line advantage over Shane Pendergrast. Doherty increased that lead with an 8.37 at 157.47 to Pendergrast’s 8.77 at 134. 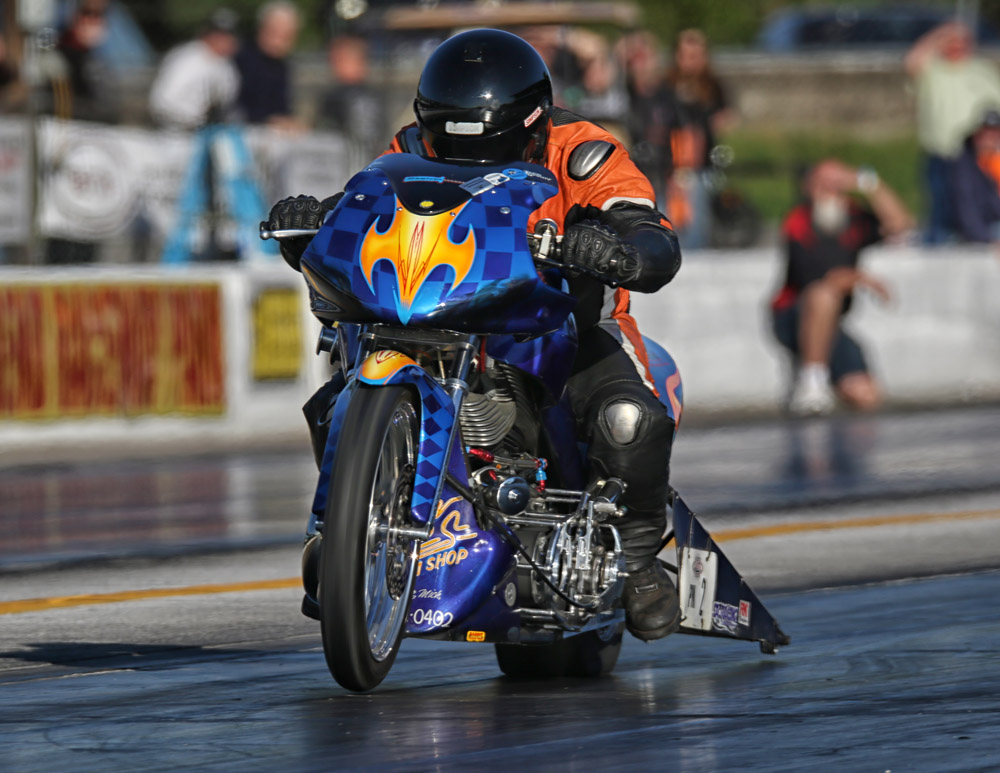 With Saturday/Sunday sweeps spreading like a bad rash, Gary Douglass (who also carries the number one plate) took Modified qualifying with a 9.12 before vanquishing Dan Leslie in the final. Douglass fed Leslie .014 of lead at the tree but reeled him in solidly with a 9.10 at 131 to a 9.65 at 121. 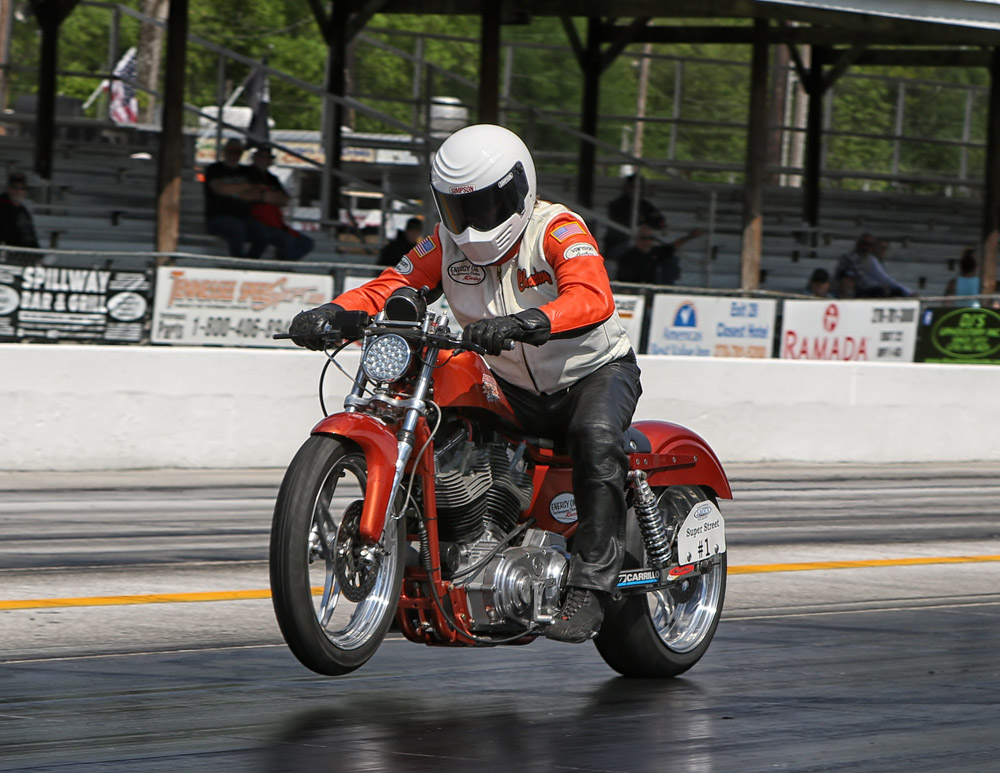 Again in Brock’s Performance Outlaw Street, number one qualifier Stephane Crete (8.20 at 164 mph) took the final round win over Super Street winner Charley Douglass. Proud Canadian Crete left Douglass at the start like Charley was stuck in maple syrup—.089 to .195. Douglass’ strong 8.25 at 163 wasn’t enough to get around Crete’s vulnerable 8.32 at 158. 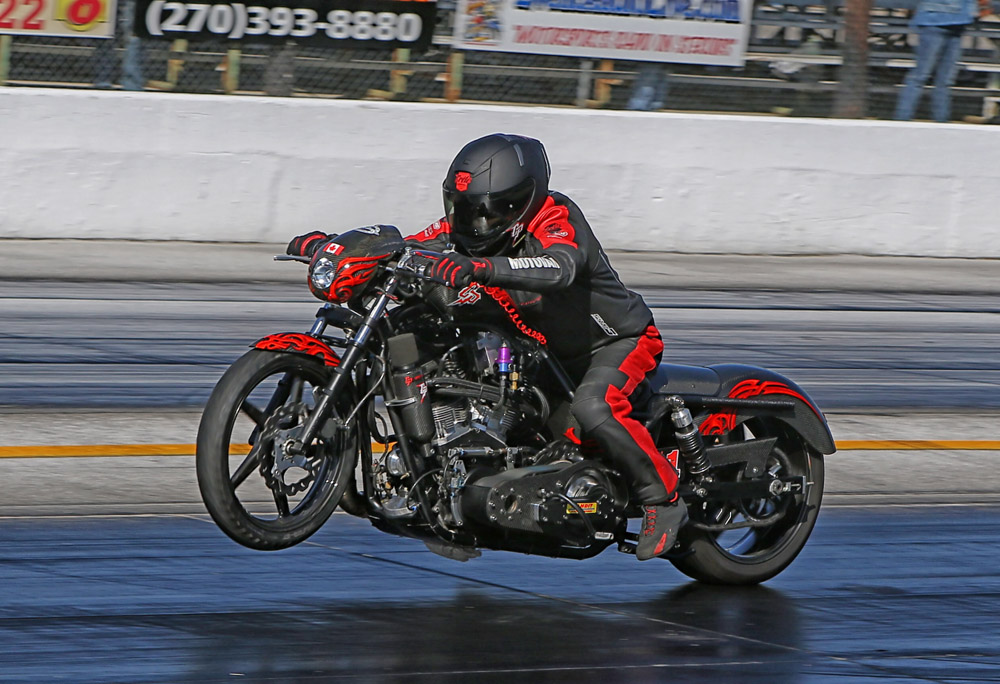 Nothing was stuck about Missouri’s Curt Stuckenschneider, who won Vreeland’s Harley-Davidson Top Eliminator 9.30 index. Stuckenschneider gave up .011 to final round opponent Steve Matthews, but ran closer to the number with a winning 9.40 to Matthews’ 9.47. Sharon DuBois was number one qualifier. 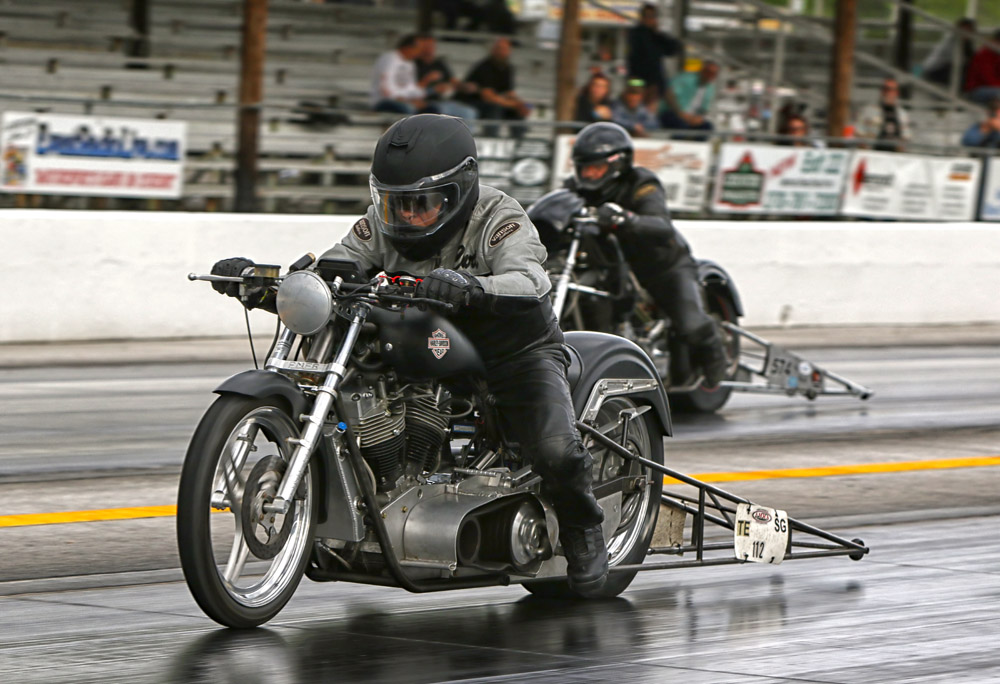 Another number one qualifying/winning combination was 23-time(!) national champion Donnie Huffman, who topped Saturday’s Super Comp charts with a 9.07 at 148 on his beautiful 2005 Quad Cam. Final round opponent Keith Richner struggled and Huffman was able to cruise to the win. 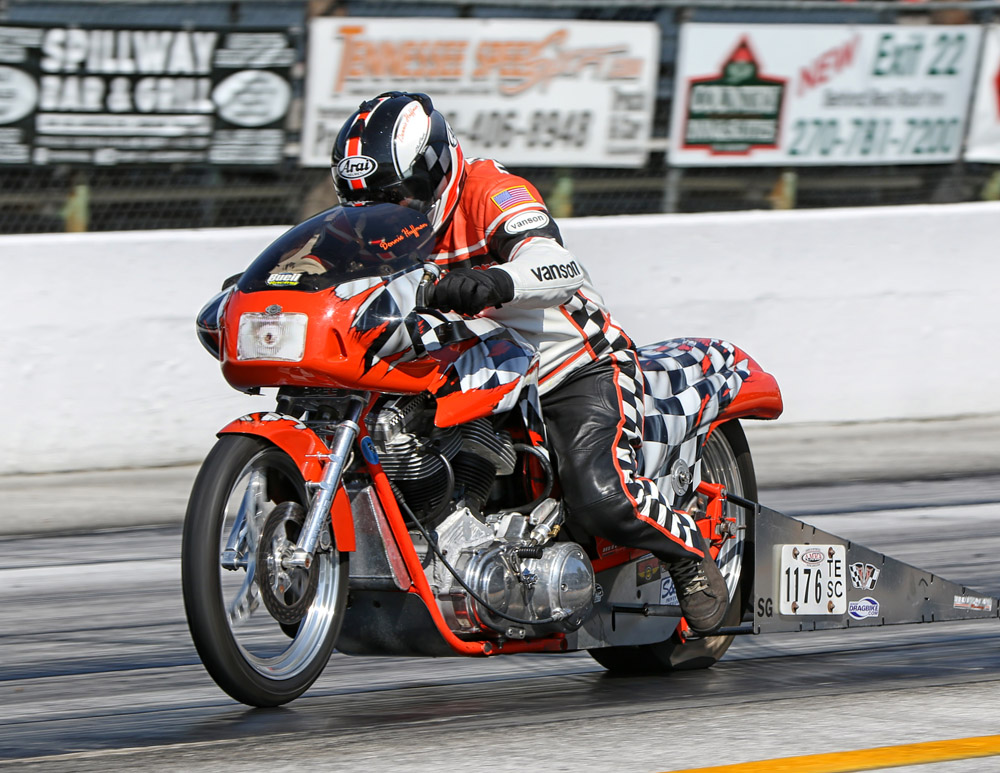 Huffman also won Pro Gas, qualifying number one with an 8.99 and, once again, scoring an easy win when final round opponent Greg Frost no-showed.

Kimberly DeShields and Bill Anderson left the line locked together with identical .049s in Vreeland’s Harley-Davidson Super Gas 9.90. But while Anderson broke out with a 9.88, DeShields took the stripe with .038 to spare for the win. 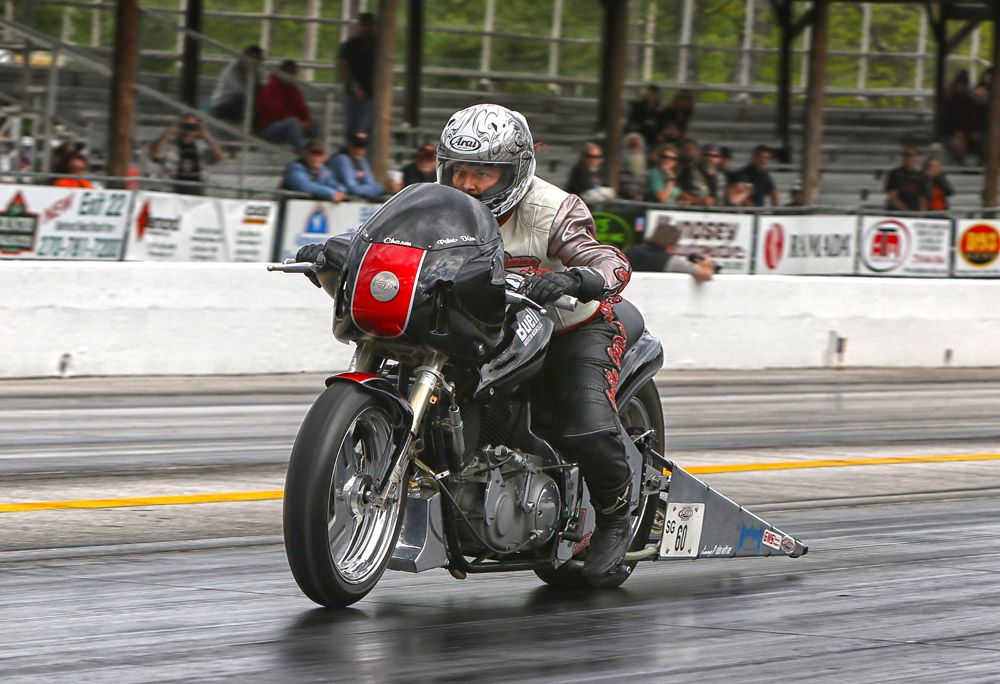 Tennessean Terry Mason took the Pro Eliminator 10.90 index win over Pensacola’s Rick Miller. Mason jarred Miller at the tree, leaving with a whopping .245 starting line advantage, and took the stripe with a 10.97 as Miller broke out—way out—with a 10.65. 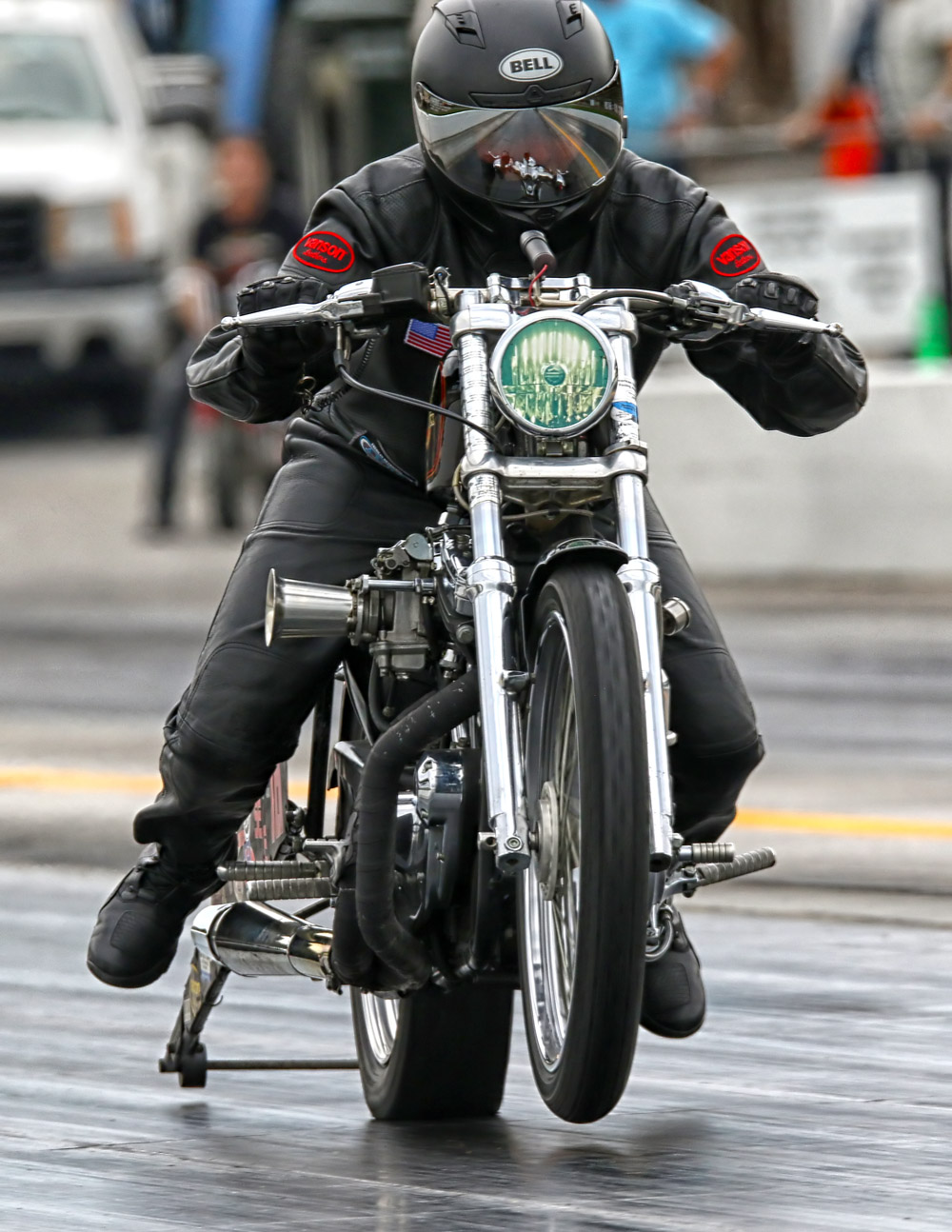 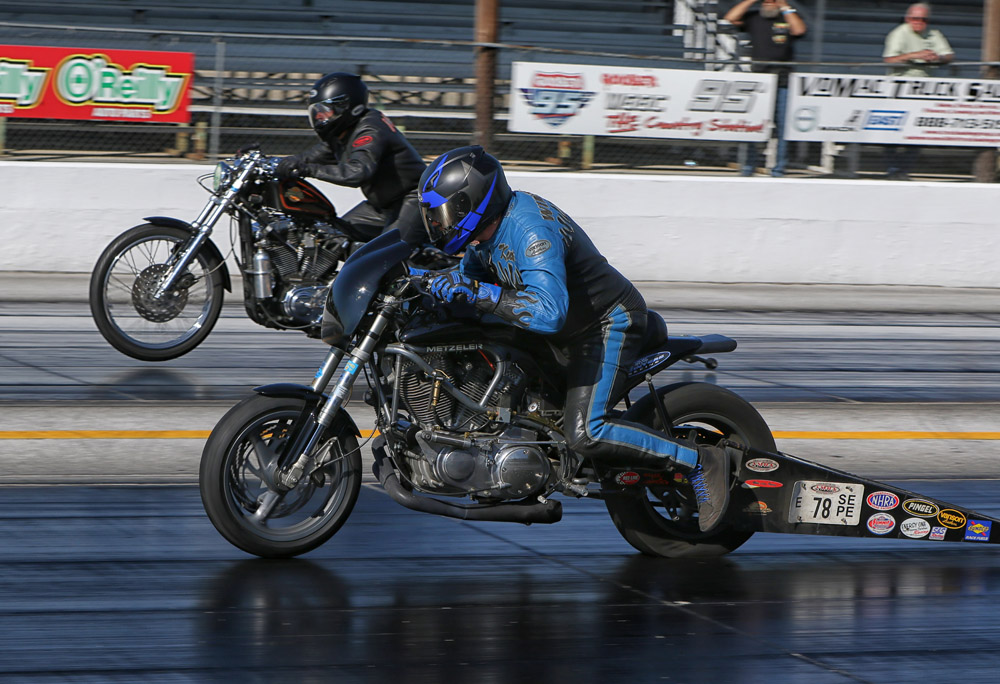 And once again, Ohio racer Dave Doremus qualified number one and won in Super Pro 10.30 index. Doremus took the tree by a .151 mile over runner-up Butch Lowe, who then broke out big time with a 10.05. 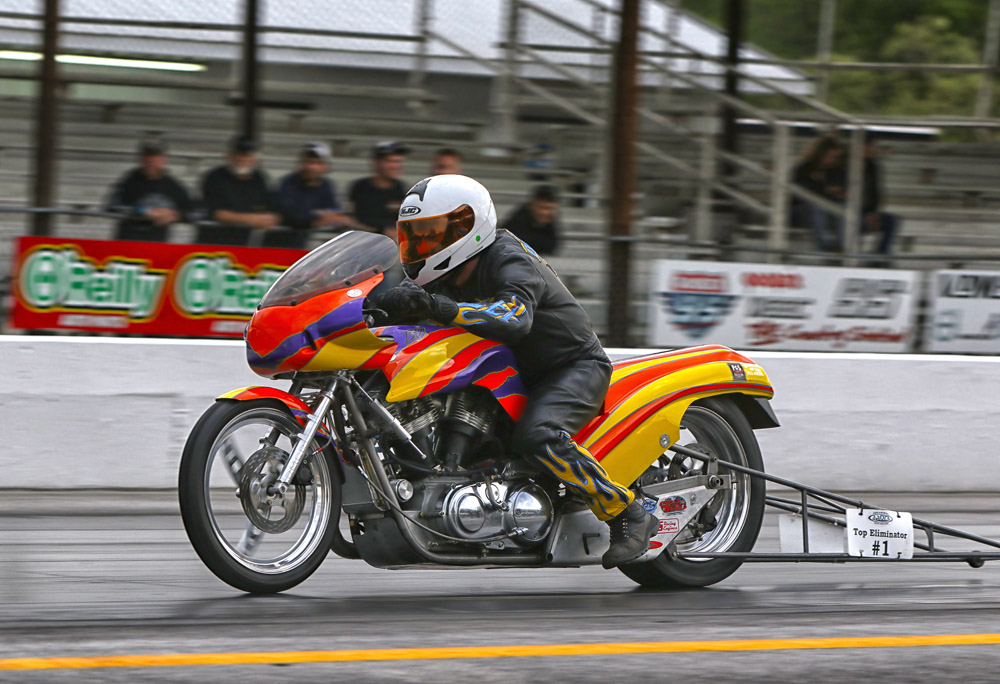 Tennessee’s Scott Barkley rode his 2005 Sportster to the Thundermax Eliminator win over Matt Hawkins, collecting a double payout after Saturday’s race was canceled by rain. 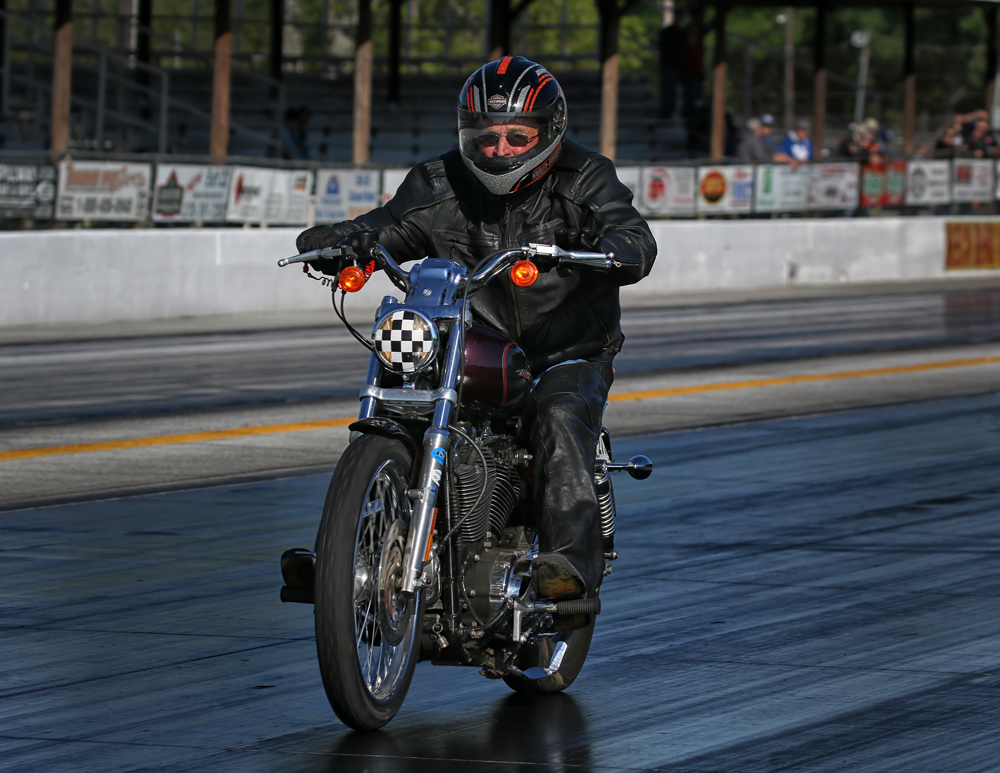 AMRA thanks all their loyal racers and sponsors and looks forward to bringing Top Fuel to the Orland Speed World Nationals on May 18-19.

Find out more about AMRA at amralive.com