Straightliners Events British and World record top speed event went ahead over the weekend (21st and 22nd of May 2016) at Pendine Sands, Wales despite the unpredictable weather conditions. This was the first time that the Bonneville* vehicle classification system was used on sand in the UK and many records were established.

Over 40 riders from as far as France and Scotland turned up for action and the range of vehicles stretched from the most up to date powerful motorbikes to a pushbike. There were also many classics and strange hybrids even a bike from the 1930’s was now running electric were in action. 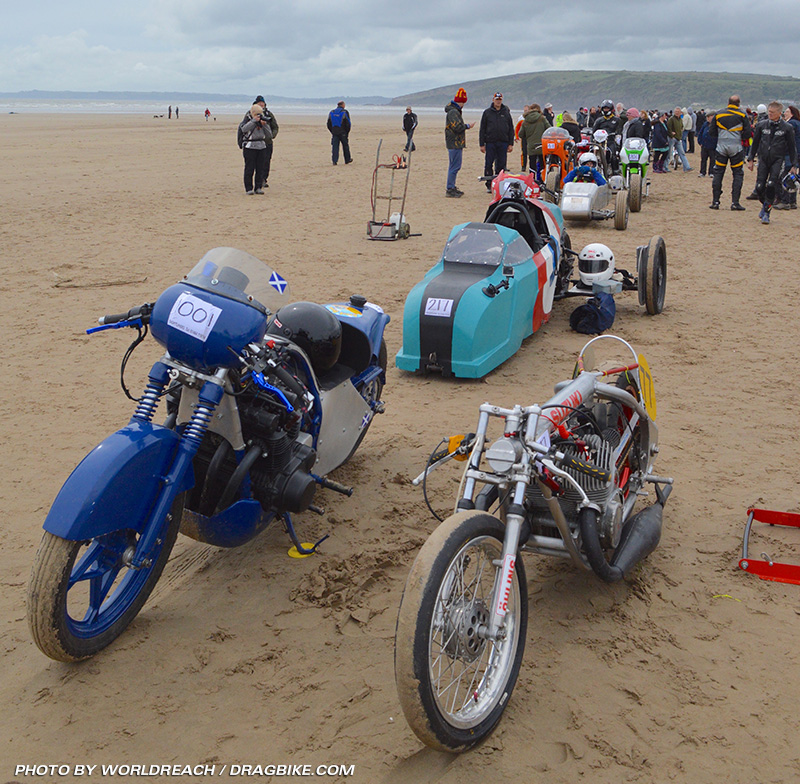 Terry Smith riding his big bore Hyabusa was once again fastest at the Straightliners event to hang on to his Pendine crown. Terry was fastest at the mile distance at 181.099 breaking his 176 mph record of last year. Others going at the mile were Kev Kearsley, his first time on the sand, at 174.394mph with Zef Eisenberg 3rd on 173.394mph and Robert Bean, 164.531mph, in 4th.

At the 1.5 mile distance Terry edged towards 200mph with a run at 194.589 a new record. The other riders behind him were

An eclectic mix of bikes and classes made up the other runners notable were some of the smaller machines. Anthony Edwards, supercharged Honda 125, managed 86.123mph. The two BSA Bantam 125s, veterans of Bonneville, went well Karl Meredith 90.542 and Stephen Roberts 91.453mph.

All the way from France on the Majestic electric bike Gilles Pujol did a credible 76.340mph. The smallest machine, the Puch Maxi 77cc, managed 63.627mph and Honda C90 mounted Tim Martin, all but with 177cc, did 76.135. And finally achieving his aim of cracking the 100mph barrier, one armed Andy Slade achieved 105.632mph on his Honda CRF 450 enduro bike. 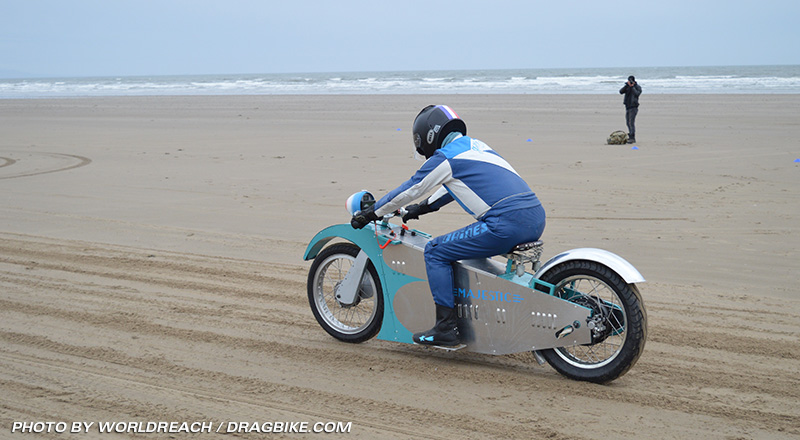 Chris Ireland (Great Yarmouth) and his beautiful looking ‘Indian scout’ was in action also. He was previously featured in a TV documentary, when he went to Bonneville Salt Flats Utah USA, for a speed record event in 2014. 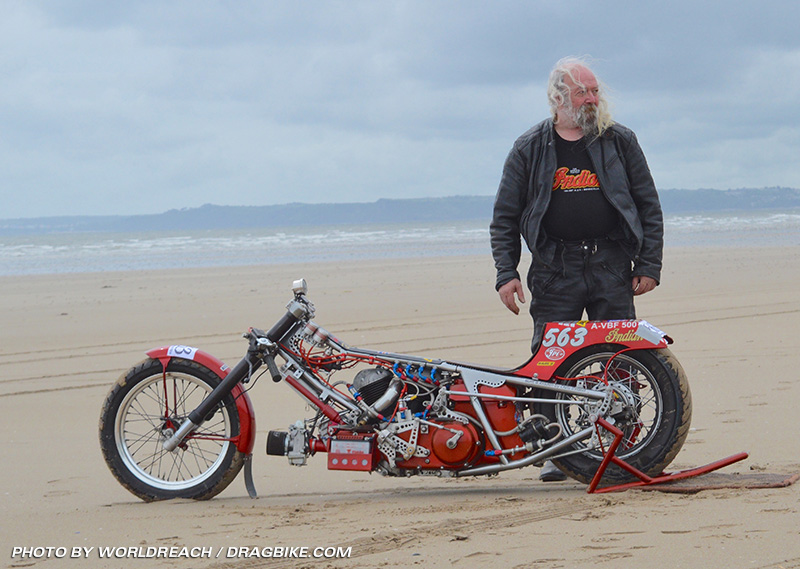 Straightliners organise over 40 vehicle speed events across the UK. It is unique in that it makes its events open to all comers. The events are regulated by the Auto-Cycle Union (ACU). All participants attempting records must hold an ACU licence and pass official scrutineering.

Next Straightliners event is the Ramsey Sprint the 5th and 7th June on the Isle of Man. You can book here https://www.straightlinersonline.co.uk/component/rseventspro/event/36-ramsey-sprint-5th-and-7th-june.html 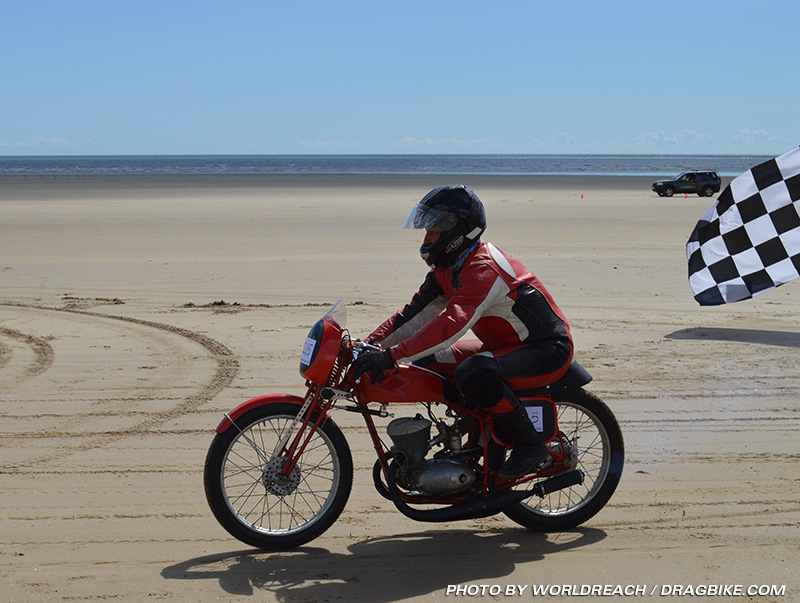 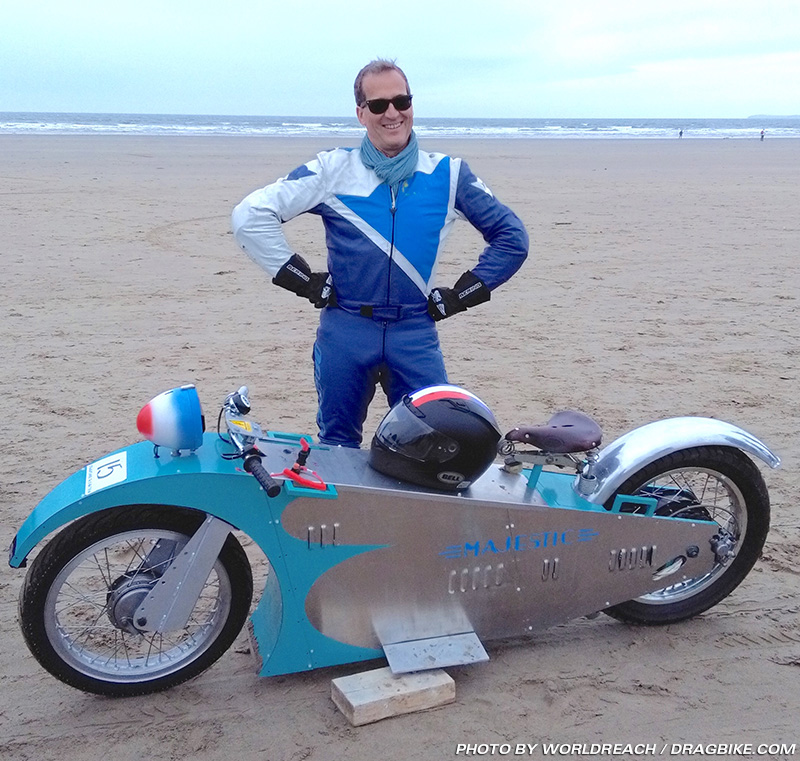