Doubling up wins on an NHDRO race weekend is a big enough achievement, but doubling up AND securing a championship at the Midwest’s largest all-motorcycle drag racing series is something else all together! But three of the world’s toughest sportsman racers— Joe “Big” Deck, Dustin Lee, and Ron Arnold—did just that this past weekend at NHDRO’s Kenneth R. Schwartz attorney at law Motorcycle Madness Nationals and World Finals at World Wide Technology Raceway at Gateway in Madison, Illinois—just across the river from downtown St. Louis. 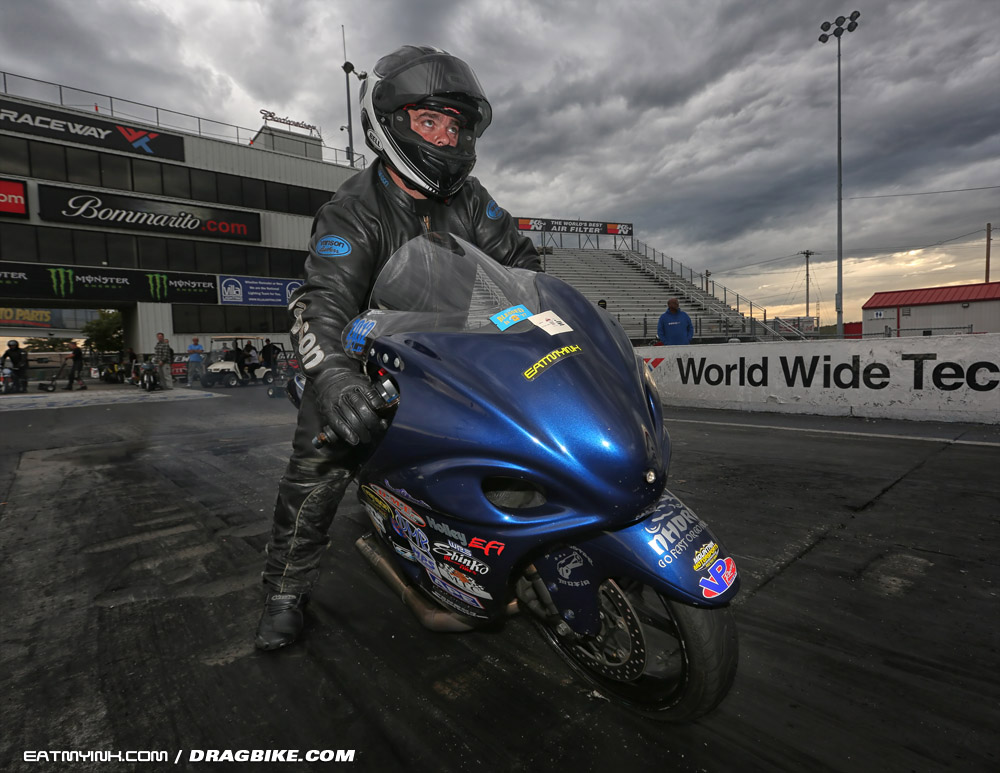 Deck—of Morningview, Kentucky—won the Hardcore Cycles Top Gas race and championship, and added an MPS Pro ET win as well. The Top Gas runner-up was popular Chicago no-bar racer Michael D’Addio, who gave up .060 at the tree. Deck’s Pro ET final round victim was Bill Hormuth of Hampshire, Illinois. Deck and Hormuth both had great lights (.017 and .018 respectively), with Deck’s 8.18 sticking closer to his 8.16 dial-in than Hormuth’s 8.91 on an 8.87. David “Skywalker” Thompson was the Top Gas number one qualifier. 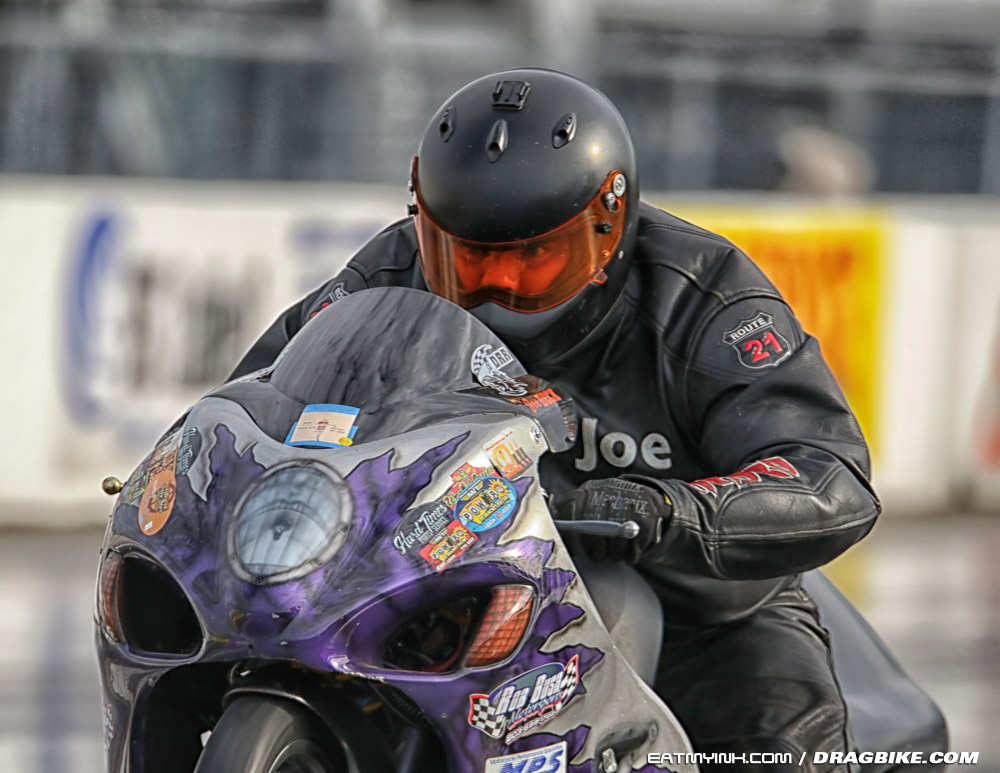 “We don’t overthink things,” Deck said about his key to success. “I’ve been chasing a championship since I started racing Top Gas, and I’ve finally done it. When you’re the last man standing at the end of the day, it makes you feel good.

“I’d like to thank Donnie Emerson, I wanna thank God for giving me everything I do, my wife and my kids, my racing family, and Dave Page. Dave does my motor work and I literally beat the eyeballs out of it. We appreciate Kenny Schwartz for sponsoring the race, and I wanna thank Niki and Brian (NHDRO owners Brian and Niki Welch) for doing what they do and putting themselves out there on the line for us.”

“And winning Pro ET is always special to me at NHDRO, because myself being a no-box racer, it takes luck and I’m glad I had it.

“It was another great season at NHDRO. One championship, a second, a third, and a fourth. I wanna thank Brian and Niki for what they do for us!” 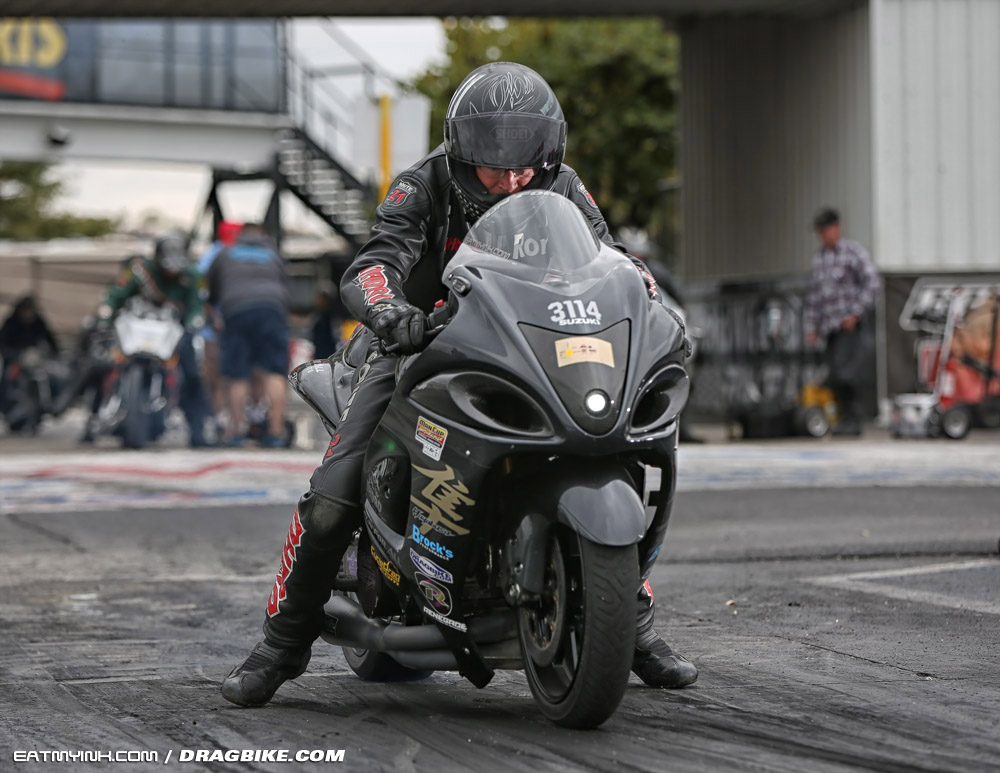 “Thanks NHDRO!” said Arnold. “Thanks Fun For All Motorsports for all they do, and all my other million dollar sponsors like dragbike.com, eatmyink.com, Brock’s Performance, Renegade Racing Fuels, and Montgomery Motorsports. Thanks to all and I’m looking forward to next year.”

Arnold beat second generation racer Colton Gordon in the Street ET final and Pete Hubbard in the Crazy Comp final. Arnold’s .030 light to Hubbard’s .110 set the table for his winning feast. The one and only Joey DeSantis was Crazy Comp number one qualifier, and David Beshara is the Crazy Comp champion. 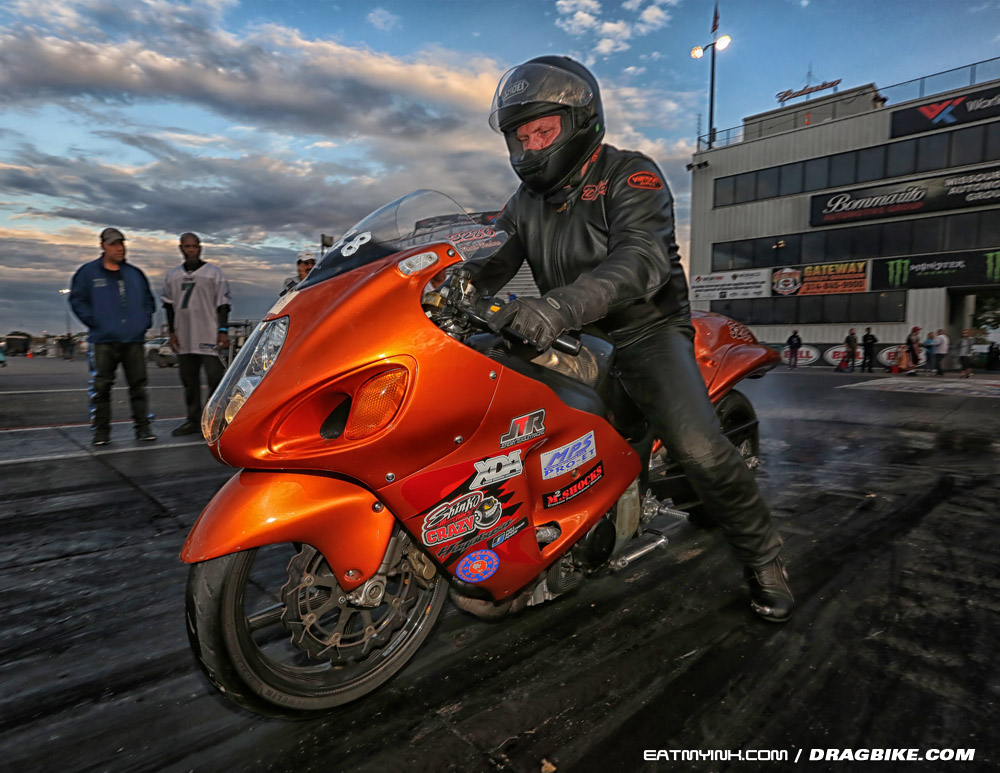 Beshara—who had his bike stolen at his home last year—started this season off with mechanical carnage but stuck with it. “It was a great year and a hard fought year to end up with the championship,” said Beshara.

“We go to the season final tied for first place with John Markham. John redlights in the first round, losing to Dustin Lee. I win round one and redlight in the second round. So that puts me out of the race and not gaining and more points. 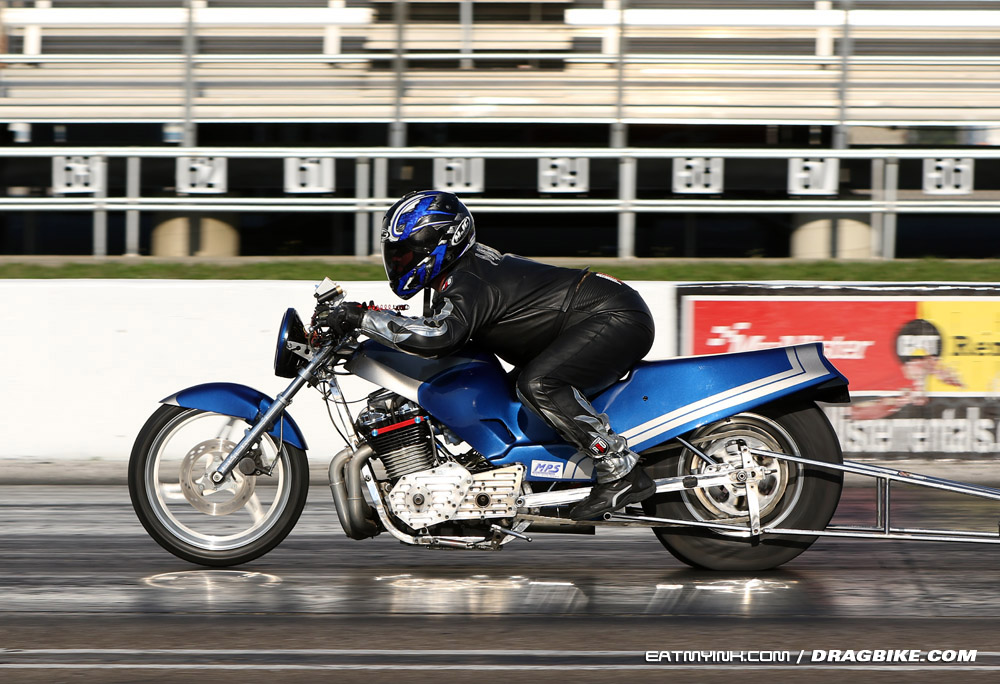 “Now Dustin is in third place tying to catch me, but he goes out in the second round and puts me solely in first place. Now Ron Arnold is in fourth place and goes on to win the race. By the end of the day, I win the championship by 15 points. If I didn’t win round one, I would have lost the championship to Ron by 5 points.

“I have to thank my wife, my Jeremy Teasley Racing teammates, and Dave Page for their support on many occasions. Thanks also to Brian and Niki for a place for us to race. See everyone next year.”

Arnold may have won the Penske Racing Shocks Street Fighter championship, but Nathan Hollinsworth qualified number one and won the Street Fighter race. He beat Andy Bailey in the final with a reaction time difference similar to Arnold and Hubbard’s—.034 to .103. Both riders broke out. 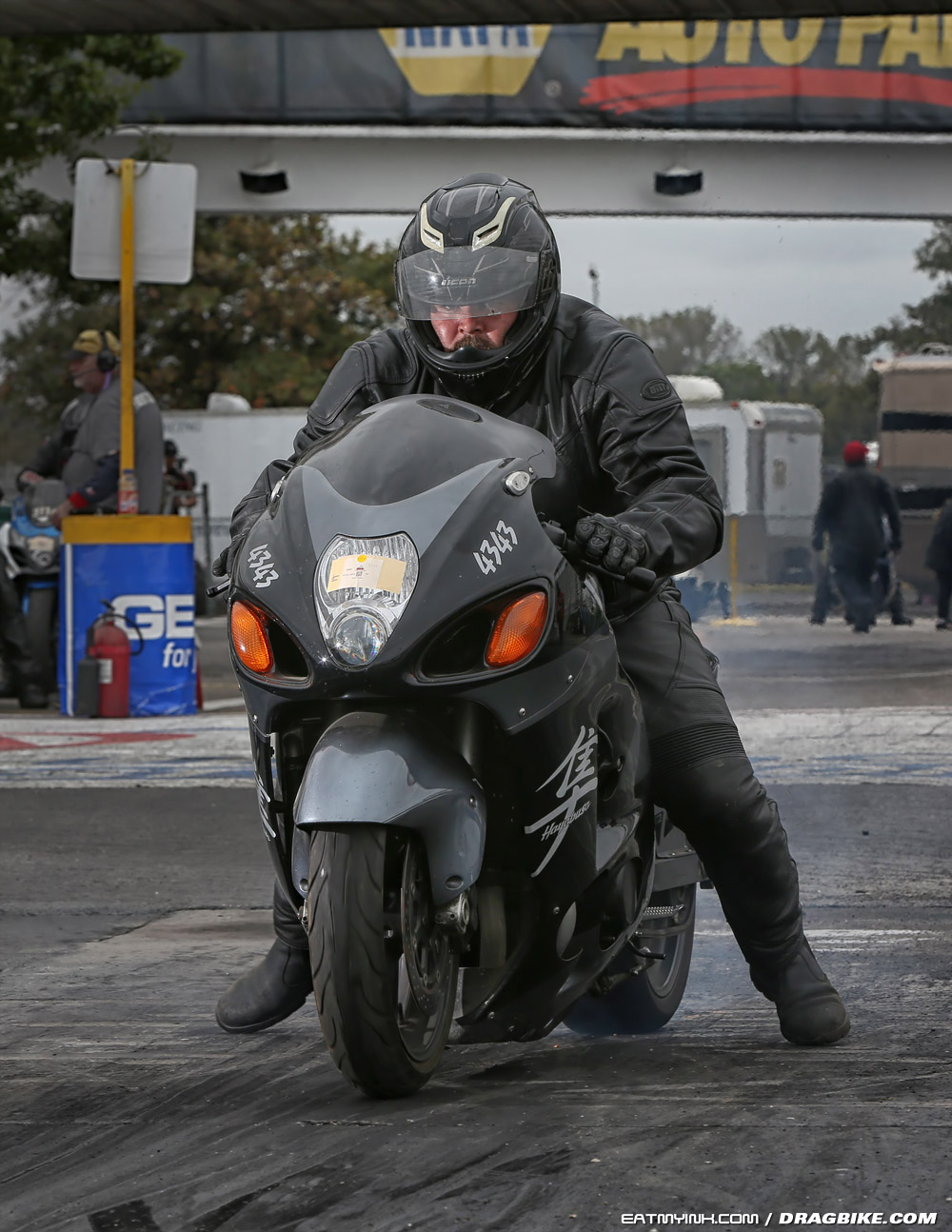 “I been so focused on all our other teammates bikes with tuning them via Holleys that I have neglected me as a racer and focused primarily on them this year,” said Hollinsworth. “But lot of the guys wasn’t able to make it to this race so I was able to try and stay focused on my race program this weekend. Although I’ll do anything for anyone at the track, it was nice to finally make a win for me.

“I came off the trailer win a 9.50 with a 8, and decided to not make any more qualifiers, and that was enough for me to be number one qualifier.

“First round I had competition bye. After a couple heavy hitters in the game, I was able to squeeze past Jeremy England in a very tight race and then Ron Arnold. The finals (with Bailey) was a good race. I had him covered the whole way from the tree to the stripe. I was just on my game this weekend and that’s that.

“It was nice to be the last person to win Street Fighter as a class at NHDRO since next year they’re changing it to Dirty 30. I’m pretty sure I won the very first Street Fighter race at NHDRO as well, so that’s something kinda cool.

“Must make mention that Bill DeShong at Porttech Racing keeps all our bikes healthy and is really the backbone to a lot of our success. Without him none of this would even be possible. And thanks to NHDRO for making sure the coverage of our events gets out to the media.”

Lots of second-generation racers made news last weekend at Gateway, but none did it with as much style as Chase Van Sant winning Pro Ultra 4.60 on his dad Bruce’s beautiful old Pro Mod. 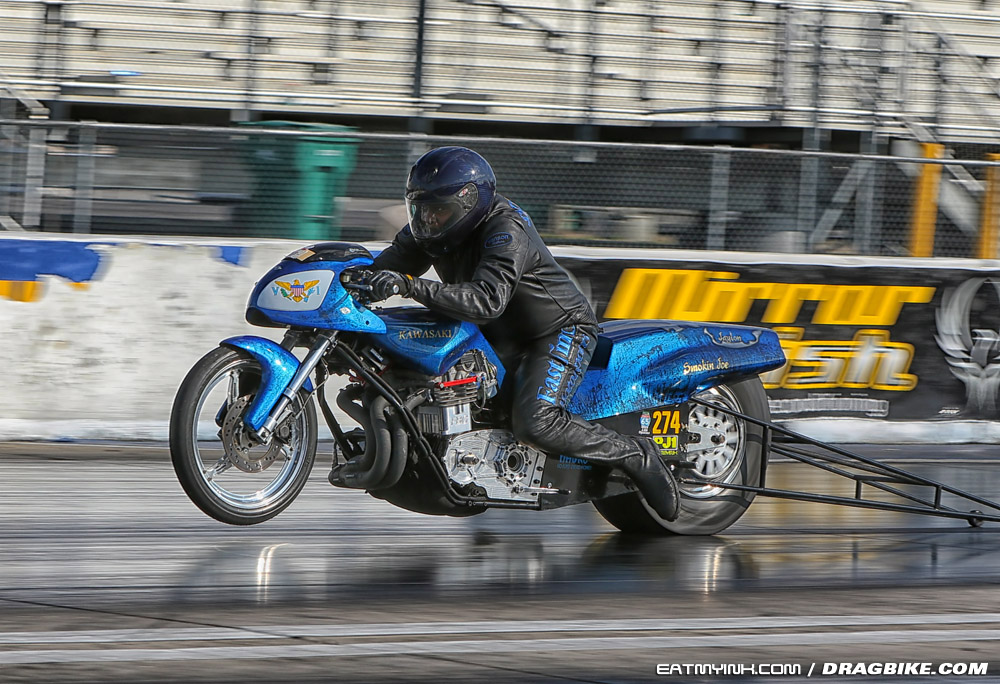 Van Sant beat number one qualifier Terence Washington in round 2, which was also a crucial round in the season championship. Smokin’ Joe Rodney beat points leader Broderick Jackson that round, despite destroying his tranny. Jackson broke out by .001! So even though his transmission still didn’t shift against Van Sant in the semi, Smokin’ Joe claimed the 4.60 championship by one point!

Riding a bike that’s older than he is, 21 year-old Van Sant then beat veteran racer Johnny Bond in the final for his first NHDRO win. 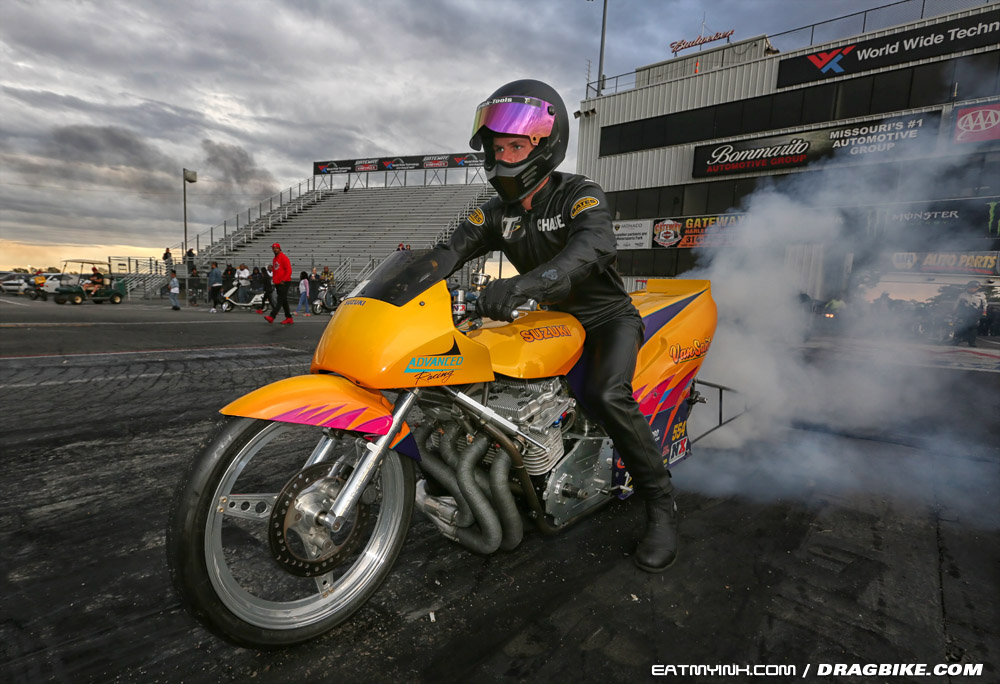 “My dad Bruce, and Rusty Kramer, built the bike prior to the 1996 IDBA and Prostar seasons and started racing Pro Mod in 1997 (the year Chase was born),” said Chase. “They built everything themselves, from the chassis to the motor and even the paint and fiberglass work. It’s unique and kind of known for running a GSXR head and a GS1150 bottom end.

“We were trying to decide where to go with racing and just around the time I was done with Junior Dragsters, the 4.60 class started to take off and it seemed like a perfect deal for us. We decided to get the bike out and use it as a good opportunity to do some great racing and get my feet wet with a big tire wheelie bar bike. We have loved the class and have had a blast trying to get a hold of the old bike again. This class is so awesome to be apart of and can be a great steppingstone into Pro Mod or something heads-up. We’ve talked about what’s next for us and we aren’t sure where to go, but for now we’re loving the class and trying to be competitive with some great racers!”

Gabe Frederick has taken most of the season off to be a new father, but stepped right back into his winning ways, qualifying number one and taking the Pro Street win over Indy winner Dave Roisen in the final. Even with a stout 203 mph trap speed, Roisen’s 7.14 was no match for Frederick’s 6.85 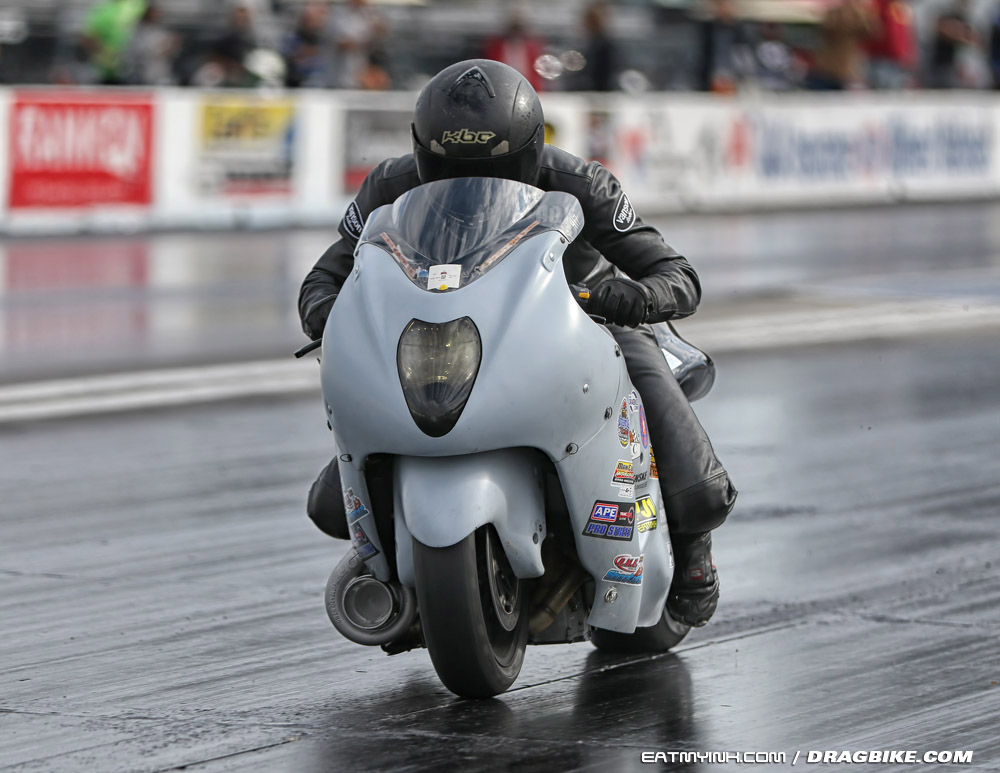 “Due to having (his newborn son) Nash, working full-time with limited vacation, and starting up a used Powersports dealership, this summer was pretty hectic, with not a lot of free time to race,” said Frederick.

“I started out the weekend with the goal of just trying to learn more about the bike on a new set-up with methanol. Friday night was very chilly, but I was actually really impressed with the job that Kane Daily with Total Venue Concepts and the other crew at Gateway did with the track—especially with the amount of cars that they were putting down it. Those guys had to deal with four oil-downs from cars in back-to-back passes.

“Being torn between knowing what the bike needed, but not wanting to risk losing rounds, I chose to just stick with the setup that would get me in the mid-to-high 6.80s for the rest of the race. The plan worked out good with a 6.88 (against high-wheelieing Brad Christian) and 6.85 in the final.

“We got a lot of information to work with and I’m looking forward to getting back down to where I was last year as far as ET’s go. We will hopefully have this bike making some respectable numbers at the NHDRO events next year.

“While the qualifying list and eliminations ET’s didn’t really show that the track conditions were there, I can assure anyone that wants to question it that the truck was on-point every round. It was as good as I have seen Gateway in a long time for a motorcycle race, probably since Tyler Crossnoe prepped up there for NHDRO a few years ago. It would’ve held whatever I was able to throw at it this weekend, but due to lack of runs and information I just didn’t have the opportunity to try and make mine go much faster than it was this weekend. Kane and the Gateway crew did an excellent job and it was exciting to know I wouldn’t have to worry about track conditions for the rounds.

“I would like to thank my dad for running with me when he can and being my pit crew. I can be pretty demanding on the old man. And Josh Affholder for helping this weekend as well. The whole Williford race team, but especially Ehren, Rodney, and John Gover for helping me get through the switch to methanol. Without them it would have been nearly impossible. Brian and Niki Welch for giving the Midwest racers a place to race when our only other option is to drive 15 to 20 hours for decent track conditions. Green Bay Anodizing for all my anodizing and Cryo needs. RPM Powersports for any parts I’m not able to get myself. Worldwide Bearings for keeping this thing rolling smooth. Firecore spark plug wires. I would also like to thank my wife for being supportive of my racing and taking care of Nash and holding the fort down while I’m gone on these trips.” 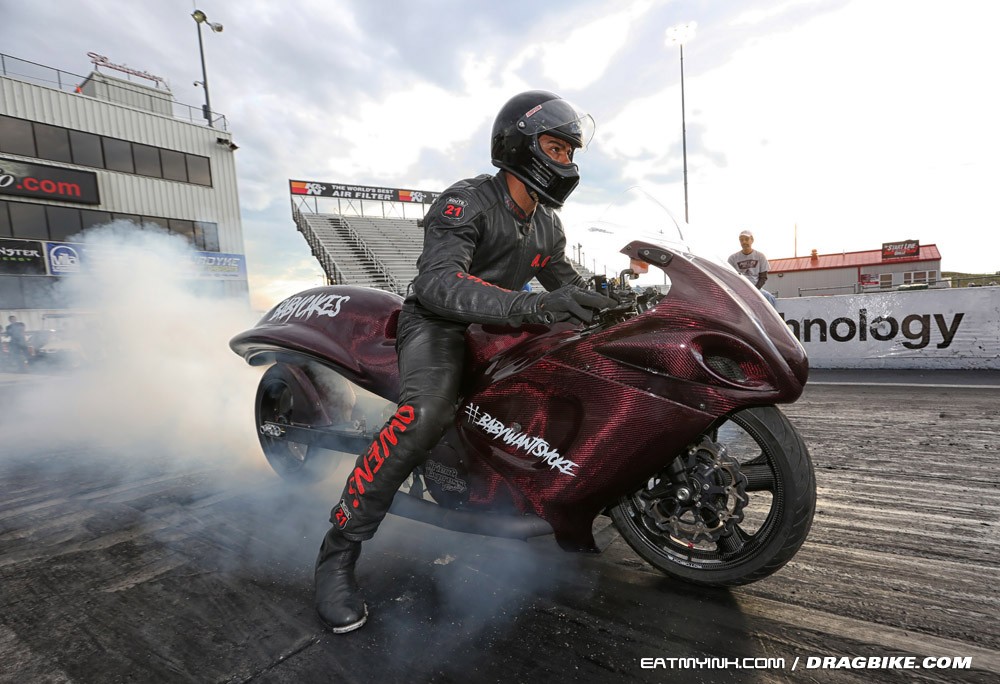 With a large field of Midwestern grudge bikes on the grounds and the starting line crowded with the people who love them, Saturday night’s VooDoo Grudge session was prepped to set off some true St. Louis Chaos. But a steady rain settled in and scuttled the program, pushing grudge action to the light of day on Sunday. One of the highlights was NHDRO regular Wiggle winning an all-Kawasaki ZX14 battle against Gold Mouth.

Next year is a big one for NHDRO, with all races moving to the centrally located, hallowed grounds of Lucas Oil Raceway near Indianapolis. Brian and Niki Welch wish everyone a fabulous off-season and look forward to welcoming the NHDRO family back to action in 2020.