HomeNews / Race ResultsNHDRO Finals are Big for Litten and Champions

NHDRO Finals are Big for Litten and Champions

NHDRO Finals are Big for Litten and Champions

NHDRO—America’s fastest growing motorcycle drag racing series—packed two-race weekends into one at their DME Racing /Prostock Inc. World Finals on September 29-October 1 at Brownsburg, Indiana’s Lucas Oil Raceway. Because eliminations from the August race were rained out, racers, NHDRO and LOR staff had to fight through oildowns, big fields and a dramatic crash to complete the hectic double schedule and determine season champions, and they did just that. 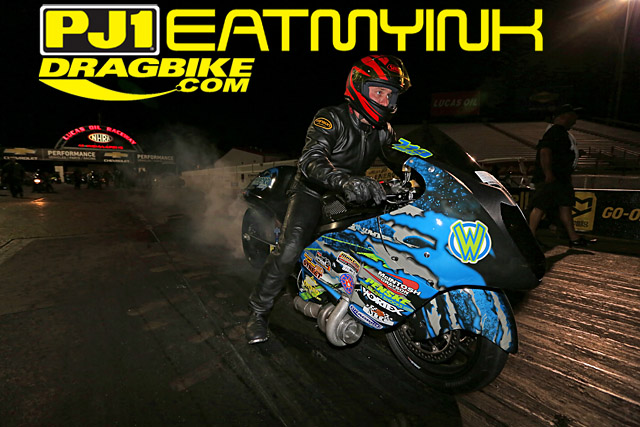 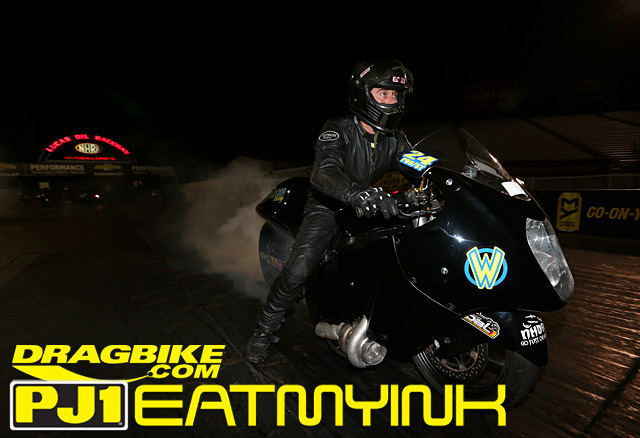 But Williford struggled mightily in qualifying at Indy. While teammates Litten and Mark Gargiulo locked out the top two spots (a jaw-dropping 6.68 for big boy Litten and 6.76 for equally stout Gargiulo), Williford had two throw-away runs and failed to make the A field on his only clean pass in Q3. The world’s quickest and fastest Pro Street bike would be racing in the B field on Sunday.

“Not sure if it was a bad tire or just not broken in yet,” Williford said about his struggles. “It had 4-5 passes on it and just would not hook. We put an older tire with 20-30 passes on it and had no problems after that.”

The August race was run during Saturday’s qualifying sessions for the Finals. Points leader Justin Doucet lost to Mike Bayes in the first round, and Bayes lost to Mike “Kavos” Kovacevich in round two. Bayes’ teammate Richard Gadson—the number one qualifier back in August—lost to Quicktime Motorsports’ Rudy Sanzottera, also in round two. 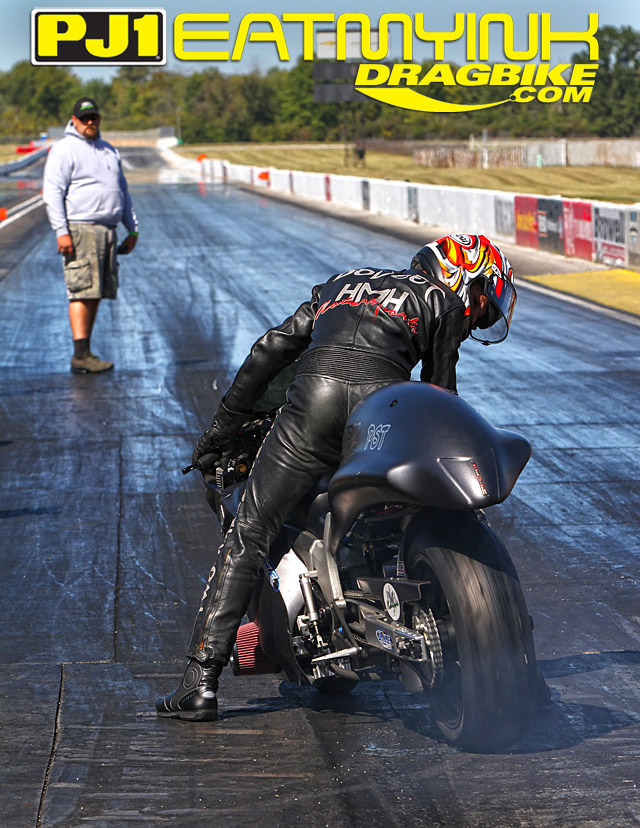 Sanzottera then lost the semifinal to young Brandon Mitchan, in all the way from Texas. Kovacevich, riding Nemecio Beltran’s “Pro Street Lucky” bike, beat Gateway winner Gabe Frederick in the other semi.

But Kavos and Beltran’s luck ran out in the final. Despite a stellar .002 light, the “Lucky” bike slowed in the final. “According to the computer data, at about the 330 mark the motor started to eat itself up,” said Kavos. “It dropped a cylinder at about 1000 foot.”

Mitchan and tuner Scott Crawford had their bike running quick and consistent, and as the Kavos bike faltered, Mitchan kept the throttle twisted for the August win—his first Pro Street victory. 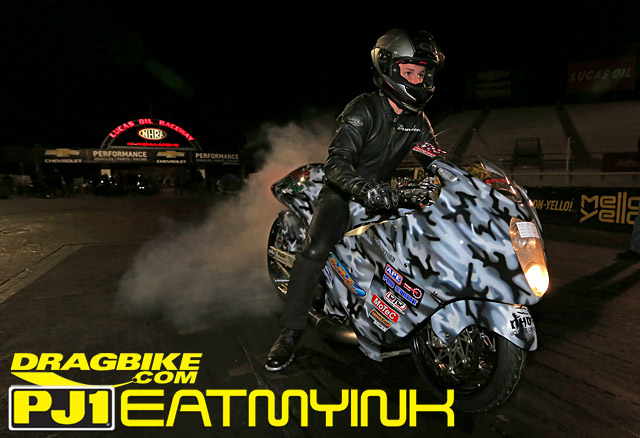 Sunday morning started bright and clear for another day of 700 horsepower, turbocharged or nitrous-huffing streetbikes—and another surprise in the final.

It’s been a long road to recovery for Frankie Stotz since he was hit by a drunk driver over a year ago, and the road to keep his lone 1000cc Honda competitive against the constant power increases of big Suzuki Hayabusas has been just as tough.

After a big round one wheelie, Stotz—along with his pioneering father Kent and tuning consultant Steve Nichols—laid down a stunning 6.77 in round two, then took out Mitchan on a holeshot in the semi.

Litten continued to stun in the other semi, running 6.69 at 229 mph against Gadson on Ronnie Mitchell’s Detroit-built “Apollonia.” After taking the tree .017 to .036, Gadson’s motor expired viscerally at about the eighth mile.

Stotz pushed the tree too hard in the final with an -.029 redlight and Litten cruised to a 6.75 for his second win in two weekends—but this one against a huge field for Big Money.

And despite losing in round one on Saturday AND Sunday, Brownsbug resident but Louisiana native Justin Doucet still took his first Pro Street championship.

With the world’s quickest Pro Street bike between his legs, Rodney Williford could basically set it on “cruise” and cakewalk through the B class, but he didn’t. The constantly aggressive Williford ran a 6.678 on his way to the final, where his 6.73 at 223 easily outmatched opponent Jake Henderson’s 7.20. 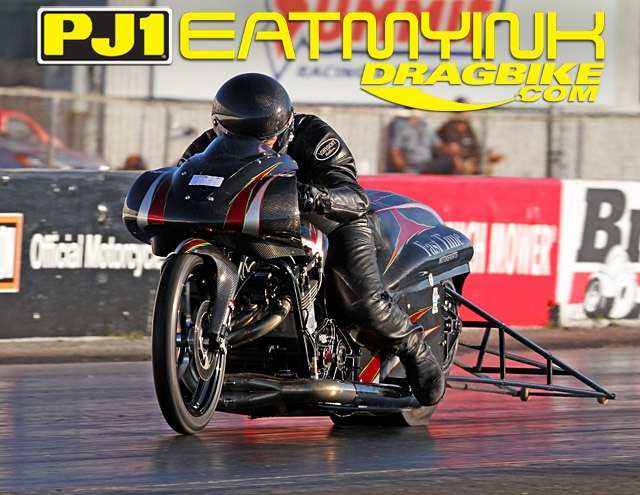 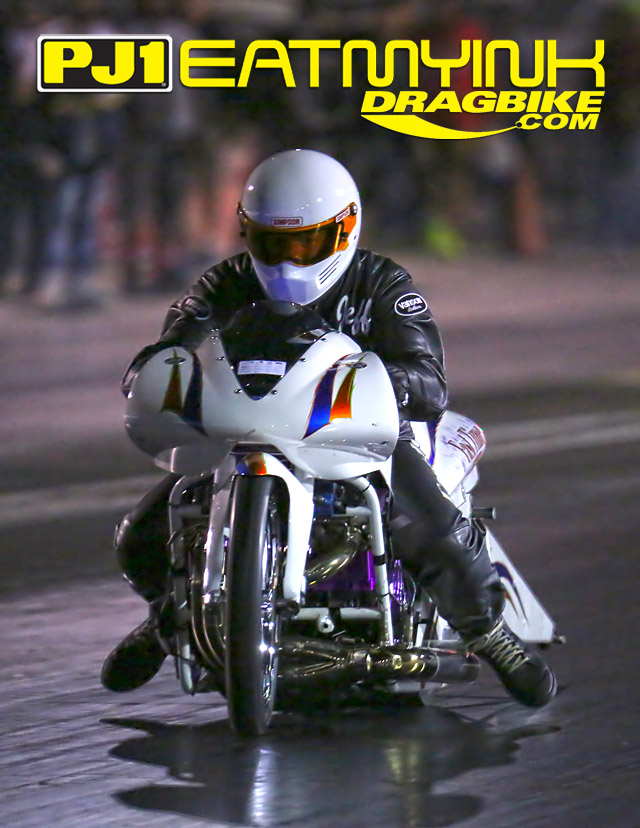 The September final found both riders hot on the tree—McCarten with an .017 and Jones with an even better .005. Jones also ran a 4.603 on that pass. Morris had a .004 against Lindeman’s .037 in the August final, and repeats as class champion. 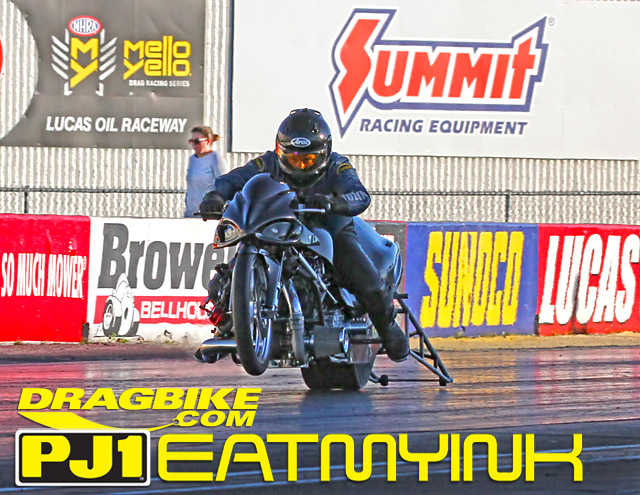 HMH Motorsports Pro Open qualified four bikes for the September race, but only two showed up on raceday as Charlie Theiss and Leshon Norman both broke. Number one qualifier Ron Maddox (6.78) and Chris Cutsinger both took the tree under power for round one, but Maddox had the only bike still together enough to make a pass and took the win. Cutsinger, though, repeated as champion. 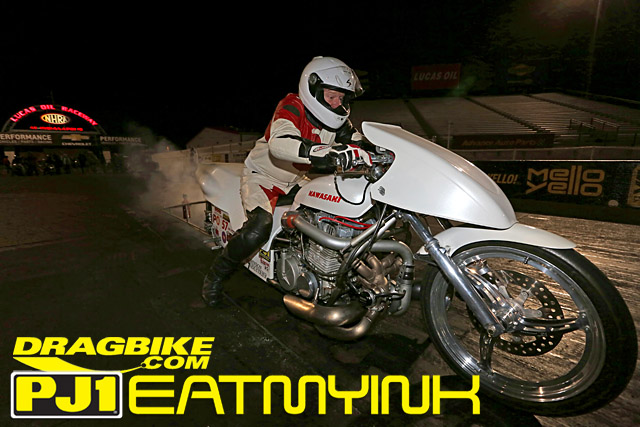 Bradley Shellhaas came into the double race weekend with the G&G Metal Spinners Top Gas 8.20 index class points lead but watched it slowly slip away. Shellhaas lost to eventual champion Jeremy Teasley in round three of the August race, then to Kevin Adams in round one on Sunday. 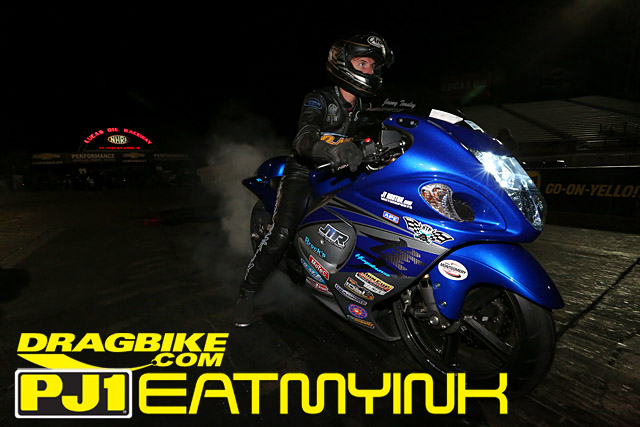 Teasley rode his streetbike to the September final, losing there to Jeremy England on a dragbike. On Sunday he lost to Adams—both on streetbikes—then Kevin beat red lighting Joe “Big” Deck in the final.

Teasley is the first-ever Top Gas champion anywhere in the world who accomplished the feat on a streetbike. 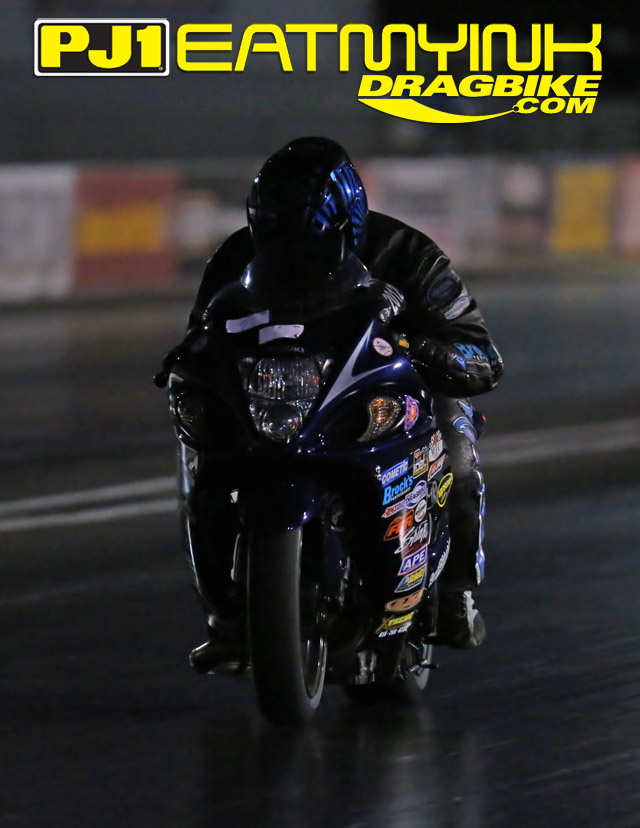 Lee finally succumbed to Ken Selner in the third round of the September race, but that was enough to secure him the title. Selner lost the semi to Cameron Teasley, who then redlit by -.003 against Spencer Claycomb in the final. 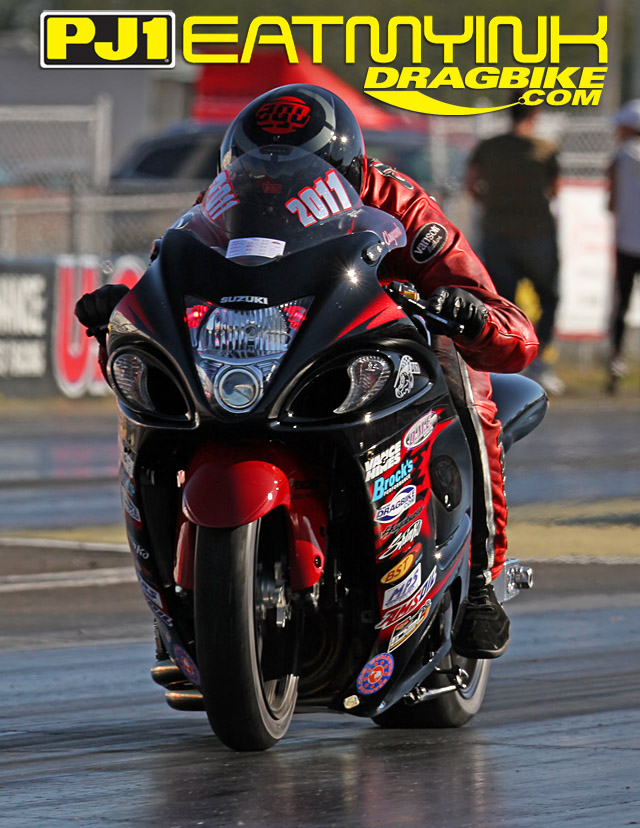 Two-time dragbike.com BAMF Lee also retained his Millennium Trailers Super Comp points lead through the weekend, securing that championship as well. He lost to Wes Brown and his GSXR of Renown (with a .016 light) in the August final. Kevin Adams added the September Super Comp final to his Top Gas win when Stephen Knight redlit in the final. 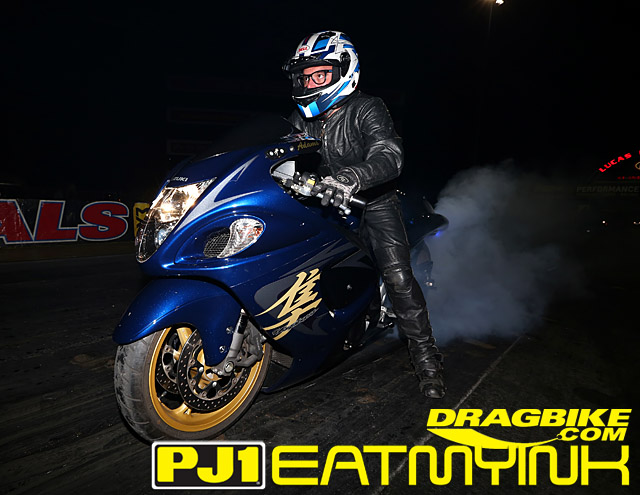 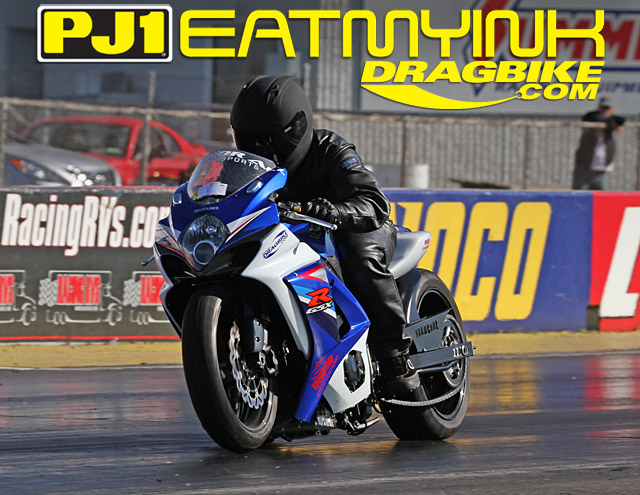 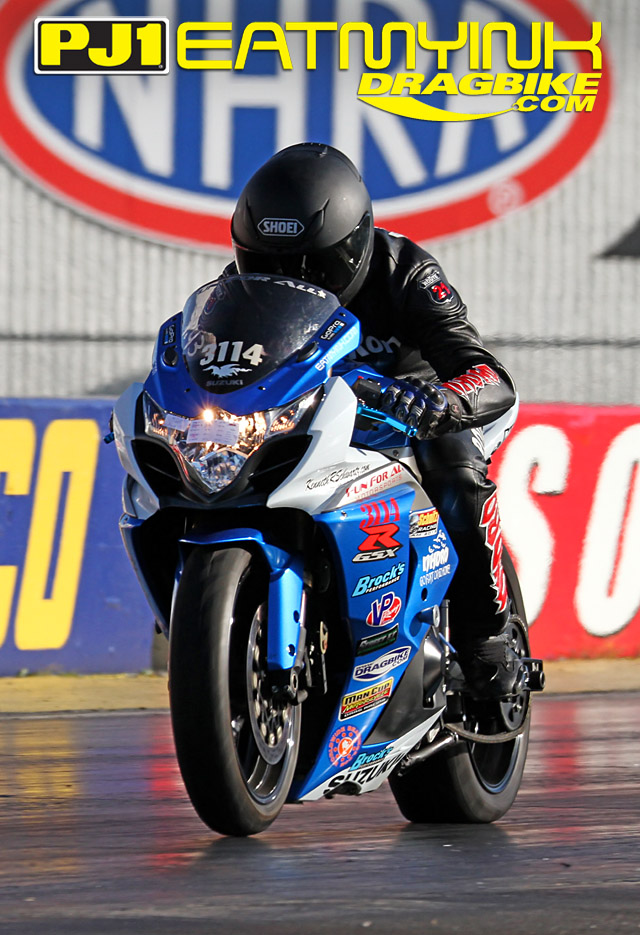 John “Spooky” Markham finally lost in Route 21 Street Fighter, with Tylan Beckelheimer claiming NHDRO’s $50 bounty on the 8.90 season dominator in round one of the August race. Beckelheimer carried that success all the way to the final before breaking out against Ron Arnold after nailing a .005 light. 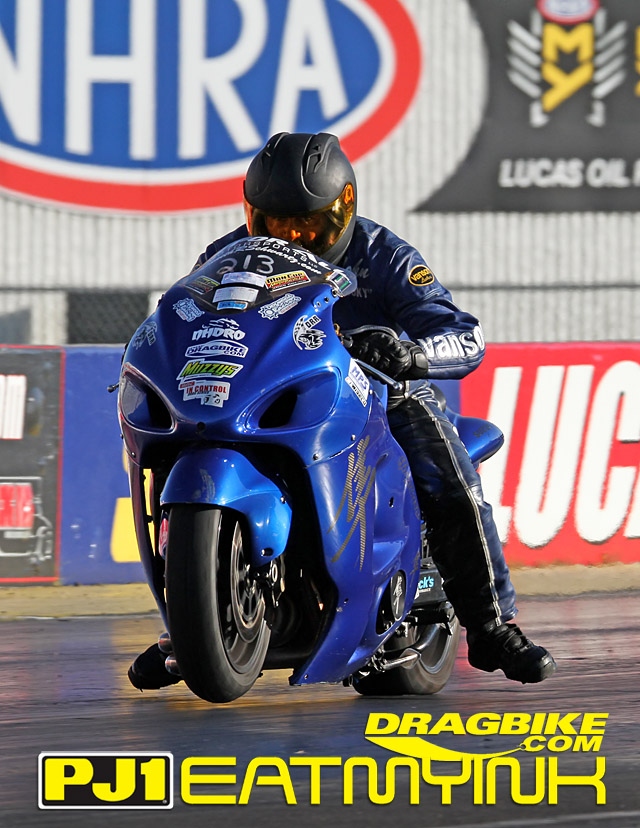 Arnold won the class again on Sunday when Stephen Knight redlit again in the final—this time by only -.002. Markham had enough points on the season to claim the Street Fighter championship. 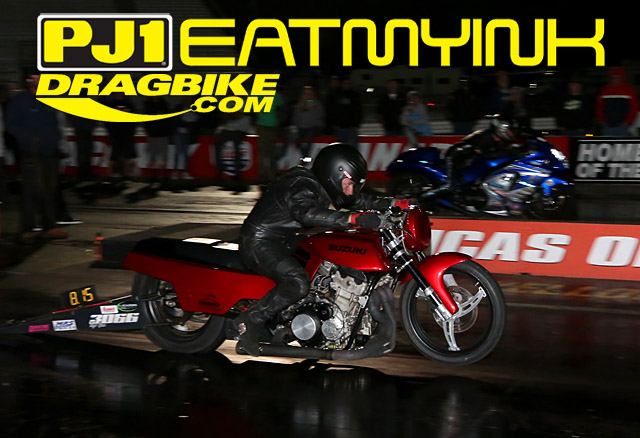 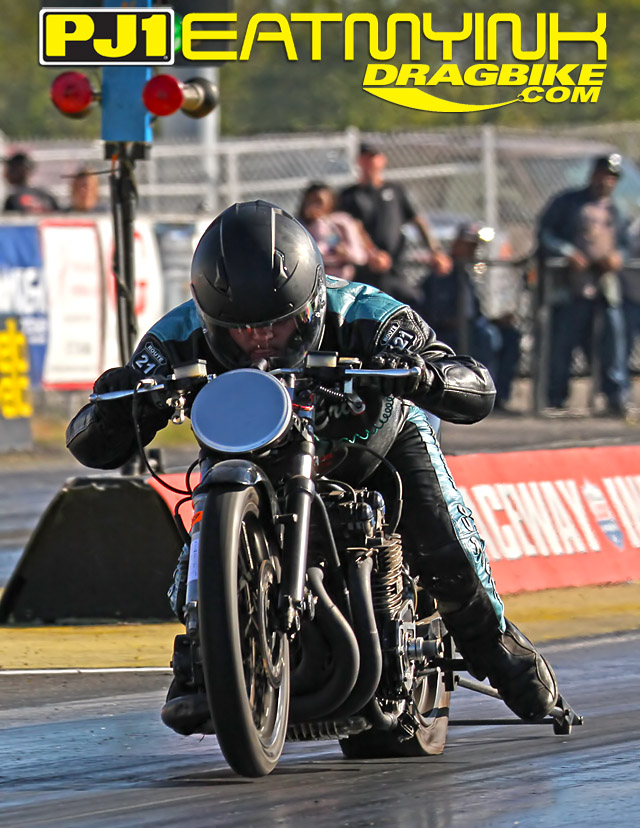 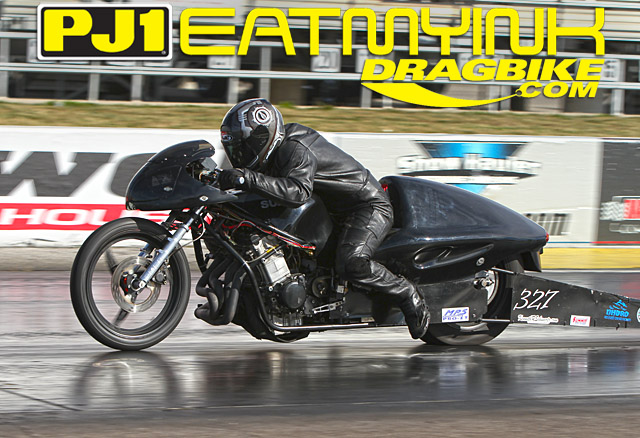 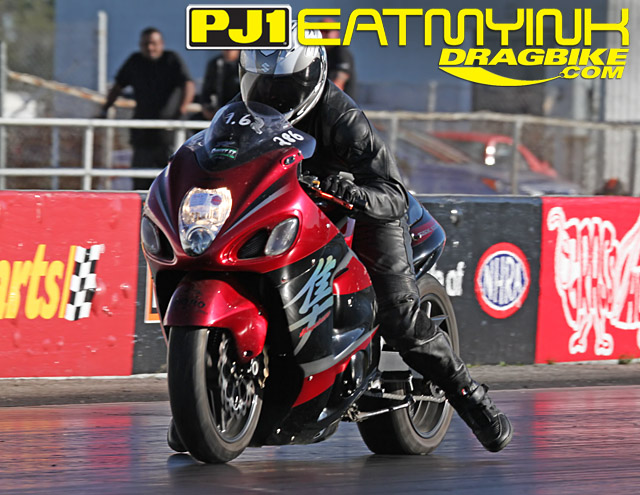 APE/Trac King Grudge saw the weekend’s most dramatic moment. In a rematch of a nine stack grudge race from Friday night, Desmond Jerel Spaulding, AKA “Kill Bill,” rode a 10 o’clock wheelie from the 330 past the eight-mile finish line, winning the race before his Roger Starrette-built “Heartless” Kawasaki ZX14 began teetering left and right on the rear tire.

Now at more like 11:30, the bike came crashing back to earth and sent “Kill Bill” hard left across both lanes and straight into the wall. It was something you really never see in motorcycle drag racing—a bike (and rider) hitting the wall nearly head-on. Despite everyone fearing the worst as he lay in a motionless heap on the track, Spaulding amazingly came away with no broken bones. 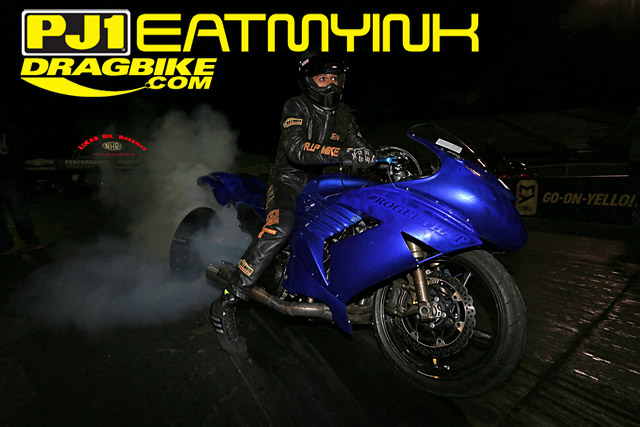 The “Heartless” team actually showed great heart (and stupefying confidence) in accepting the two eighth-mile races against Vince Hileman on the “Family Man” bike—giving “Family Man” the back tire and requiring a gap at the line in a half-track race. “Family Man” was the one that wheelied on Friday night, and lost both races.

Brian and Niki Welch thank all the NHDRO racers and sponsors for their support throughout the season and are working hard to put together an even better schedule for 2018. Check the NHDRO app for the quickest announcements about next year.