NHDRO—the Midwest’s largest motorcycle drag racing series—brings its track-blistering, good time, high-speed circus to the St. Louis area’s Gateway Motorsports Park for the first time ever. Gateway will thrill to the spectacle of two wheeled speed and culture in a way that hasn’t happened since AMA/Prostar scorched the track with St. Louis Chaos some 10 years ago.

8:00am – The track is going hot an early today to try and finish the race before tonight’s forecasted rain comes in.

10:00am – Sportsman eliminations are now underway. At 10am it’s already 74 degrees and climbing. I am sure a lot of racers are going to be happy to get some of their runs out of the way before noon.

3:00pm – After some technical issues we are back on line. We have rounds 1 and 2 of Pro Eliminations in the playlist below. EatMyInk.com still has their Live Video stream running to watch live racing accident.

When you watch Pro Street eliminations round 2 you will see that Ryan Hable gets the win against Doug Gall on the scoreboards. Ryan Hable was DQ’d that round for lurching through the beams and staging either with his foot or rear tire. It is debated what he staged with, but we do know it was not with his front tire. So Unfortunately for Hable we hill not be back for the next round.

PMRA racers Patrick Roetto and Brian Wood made the trip to St. Louis for the first annual race at Gateway International Raceway. While Brian Wood won many rounds over the weekend, it was Patrick Roetto that had the better weekend. Roetto went to both the Street and Pro ET finals on Sunday. And despite Roetto getting perfect triple O lights all day that has his competition dodging him in the lanes, he wasn’t able to close the deal with a win. Greg Mallet triumph with the win in Pro ET and Ben Knight was lucky enough to get one of Roetto’s rare redlights in the Street Final. Both finals can be viewed in our Weekend Playlist below.

12:00pm – Racing action is underway here in St. Louis, MO – The weather is gorgeous and the turn out is INCREDIBLE!!!! The pros are in the lanes and we are going to head out to the track so we can get videos posted for you following the first session. We will be posting updates on our facebook page as well until we have more data to post for you.

3:30pm – we had a bit of downtime here but we have started uploading the first round of qualifying videos. Tim Hailey has a live feed of the race on his page EATMYINK.COM‘s head over there to watch all day.

6:00pm – A Pro Street shootout has been announced for tonight! But the big news in the pits is that Doug Gall has sold his Pro Street bike! April Henderson seems a little broken hearted. But Doug has already started planning his next bike build.

It 90 degrees right now in St. Louis and a lot of the racers are feeling the heat.  sportsman are about to start their final qualifying and then we will have another round of Pro qualifying.

Niki and Brian Welch held a Big Wheel contest today before the last round of Pro Street qualifying. Cayson Markham (right) took the win over Forrest Blanchard bike two big wheel lengths. There was some speculation if Markham’s real wheel were legal, but tech let them stand. 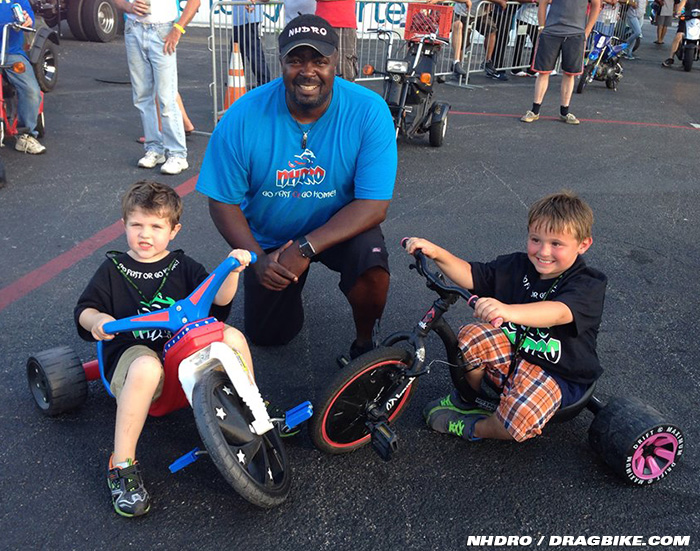 10:00pm – The Dunigan Racing Pro Street Shootout is underway, In the third round of eliminations Mark Paquette and Doug Gall finally put on a good round of side by side action. Paquette took the win over Gall with a 6.95 at 212 mph to his 6.96 at 208 mph.  We will be down for at a least an hour as the track tries to clean up an oil down.

11:45pm – Mark Paquette takes the win over Ryan Hable in the Dunigan Racing Pro Street Shootout. We don’t have times on their runs yet as the grudge clocks were on during their round.

With only two bikes in Pro Comp, this class did not run on Sunday.
#1 Qualifier : Chris Cutsinger 4.255