NHDRO Postpones to One BIG Weekend

NHDRO Postpones to One BIG Weekend

Although NHDRO’s Mid-Season Sizzle at Lucas Oil Raceway in Brownsburg, Indiana, this past weekend turned out to be more Drizzle than Sizzle, postponing it to a two-race, four-day weekend on July 30-August 2 creates a full-on hurricane of motorcycle drag racing action!

With a sketchy forecast in play for the Indianapolis area during the first big race of 2020, NHDRO’s Brian and Niki Welch went into their hurry-up offense and scheduled two rounds of qualifying on Friday night. After that it was all rain all the time, so one more round of qualifying and eliminations will be run when the NHDRO family comes back to Indy for The Big Show. 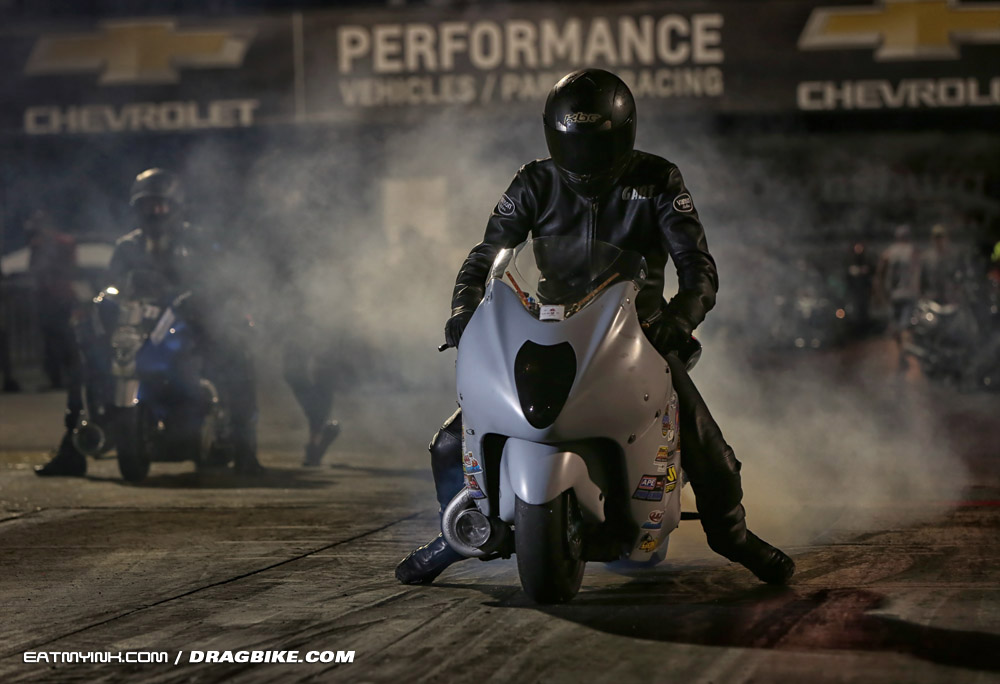 “We got a late start to our trip,” said Frederick, who traveled from central Missouri. “We pulled into the track as they were prepping for the pros and had just enough time to throw on my gear and roll the bike out of the trailer and up to the line—just in time to get in at the end of Q1 for the class.”

Frederick’s turbocharged Suzuki Hayabusa may not have a professional paint job, but few owner/tuner/riders could have come off the trailer the way Gabe did Friday night and put up a 6.74 at 213 miles per hour literally minutes after pulling into the pits. That’s a real pro.

“I knew I had a decent tune-up in the bike, but the weather was a little worse than I thought and it was a little lazy in the front half. I tried to give it a bit more for Q2 but it was just more than the track could handle.”

With bullhorns spraying a strong nitrous flame the whole 1320, Gaige Herrera qualified number two with a 6.90 at 206.

Dan McCarten’s 4.614 is so far, so good in Pro Ultra 4.60—the world’s quickest eighth-mile, two-wheel index class, presented with the I-65 series.

McCarten took his venerable Kawasaki to Jeff Jones and the Fast Time Motorsports crew to massage the bike over the off-season. “After a disastrous 2019, I wasn’t taking any chances of a repeat,” said Dan. “Jeff did one of his meticulous wiring jobs on the Ol’ ‘War Machine.’ I also had the season-long transmission gremlins addressed. 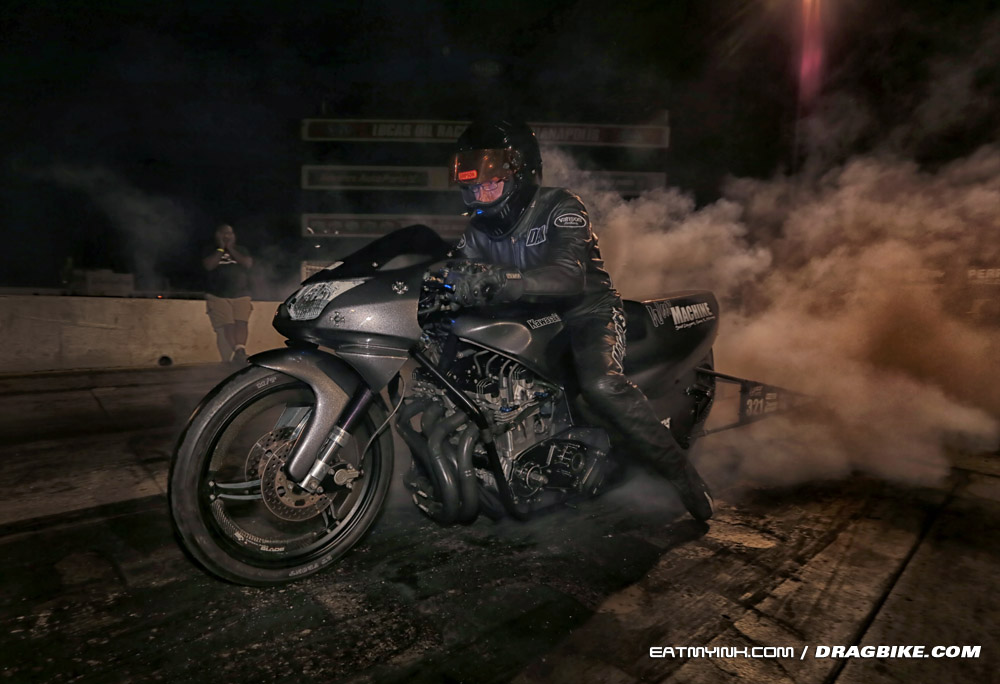 “This past weekend was the first race of the season for me with only a handful of test passes prior. I’d say it’s 95% back on track with only a minor datalog issue to straighten out.

“It’s obviously very early in my year, but all the indicators are pointing in the right direction. The original plan for Friday was just go A to B and button shift it to be sure all was good. I accidentally short shifted the 3-4 shift. It lugged the motor down pretty hard but I just let it eat because getting all 4 gears was the only real concern. I was surprised to see the 4.64 on the board.

“On the second one, I was a bit more focused on the other details, like shifting, reacting, and actually going straight. Without being able to see any data, I left the same tune-up in and rolled the 4.61 up on the board—which was a far stretch from most of last year.”

Jones sits fifth and champion Smokin’ Joe Rodney sits at the end of the order in 12th, unable to slow his new Kawasaki down to stay within the index.

Kounselor Kenny Schwartz currently leads Hardcore Cycles Top Gas 8.20 index—also presented with I-65—with an 8.211, but even Schwartz knows he’ll have to do better than that to hold the position. “There’s still one round left,” noted the St. Louis lawyer, who added: “I was lucky not to fall off on that pass!” 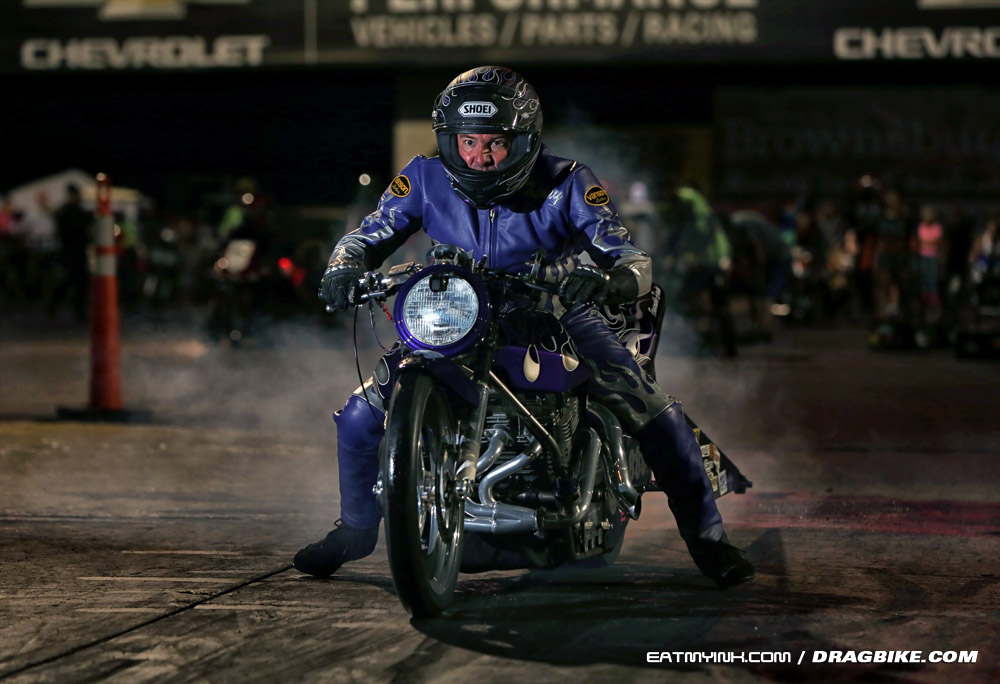 Schwartz launches his turbo Kawasaki dragbike with a 2-step button. “The button is very, very sensitive. I was lightening up the pressure a bit like I always do and it left. It definitely caught me by surprise.”

Dustin “Biscuits” Lee currently sits as the first-ever M2.Shocks 8.70 Quick Street number one qualifier—a feat since no one has had to run to this index before.

“Heck, I didn’t know what I needed to do to run 8.70,” said multi-class champion Lee. “So I made one pass during testing and went a 8.62 and thought ‘Okay, change a couple things and I will be close.’” 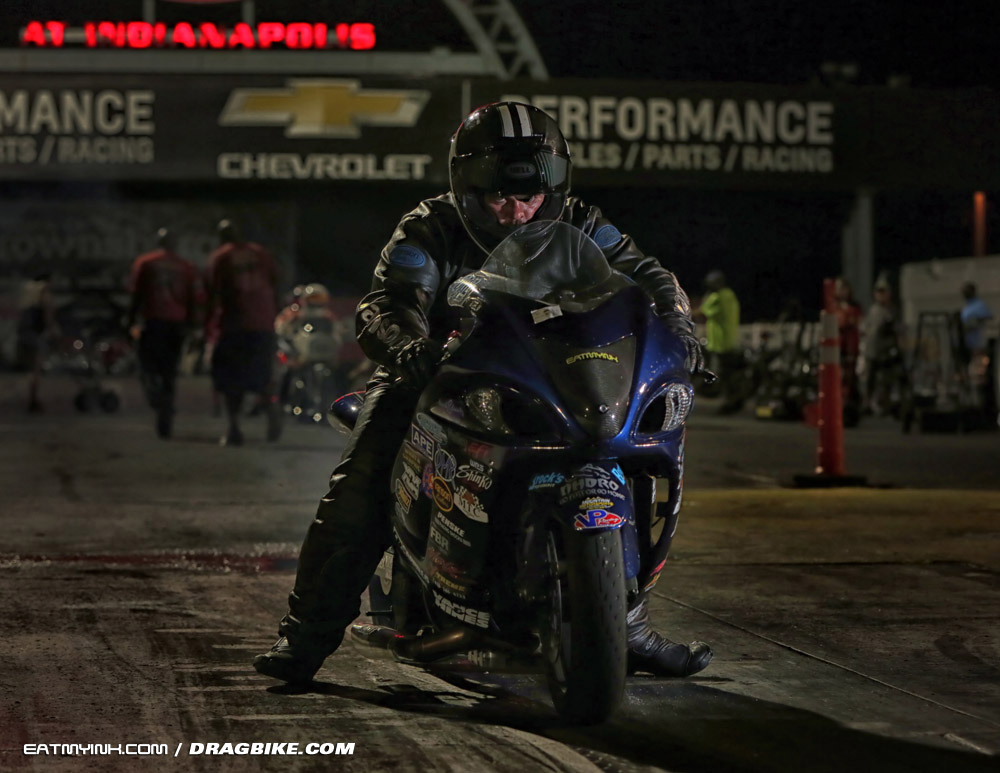 Dave Page sits second, followed by Colton Gordon, Mitch Pennington, and the rest of the field.

Mann doesn’t expect that number to hold up for number one come July. “I left .008 to get by me,” said Bob. “We’ll see what happens next month.”

When NHDRO dropped the Street Fighter index from 9.50 to 9.30 and allowed wheelie bars, dragbike veteran Joseph Klemme stepped in ready to take full advantage. Klemme is a lock to be the first-ever Dirty 30 9.30 index number one qualifier, as his first round 9.300 can’t be beat. Street Fighter champion Ron Arnold sits sixth with a 9.334.

Dustin “Naked Boy” Clark sits number one for the first, full, quarter mile round of the much-anticipated HTP Super Stock class. Patrick Cooper led Q1 on his Suzuki GSXR1000, but wasn’t as clean in Q2 and Clark was able to knock him off with an 8.852 at 159.61 mph on a Kawasaki ZX14.

“I work a bunch, but have managed to test twice and have been a bunch of 8.91.8.92 passes,” said Clark, who then described modifications to his bike:

“These days it’s ‘Run your bike through Brock’s Performance,’ It has a Sprint air filter, Brock’s exhaust, Brock’s clutch mod, Brock’s springs, Brock’s oil, Power Commander 5, and a Dragmax tire. Simple as that.

“The hard part is getting a great tune and chassis set-up to make a smooth, fast pass, and cut a bulb.”

Neither Kevin Dennis Insurance Street ET nor MPS Pro ET had a chance to race, but VooDoo Grudge slipped in some Friday night action. Josh Keller took an all-Louisville win over Brad Holland. Holland led the first 60 feet when Keller’s ‘Busa bogged a touch at launch, but then Brad’s “Killer Bee” launched skyward before settling back for the loss in a shower of sparks. 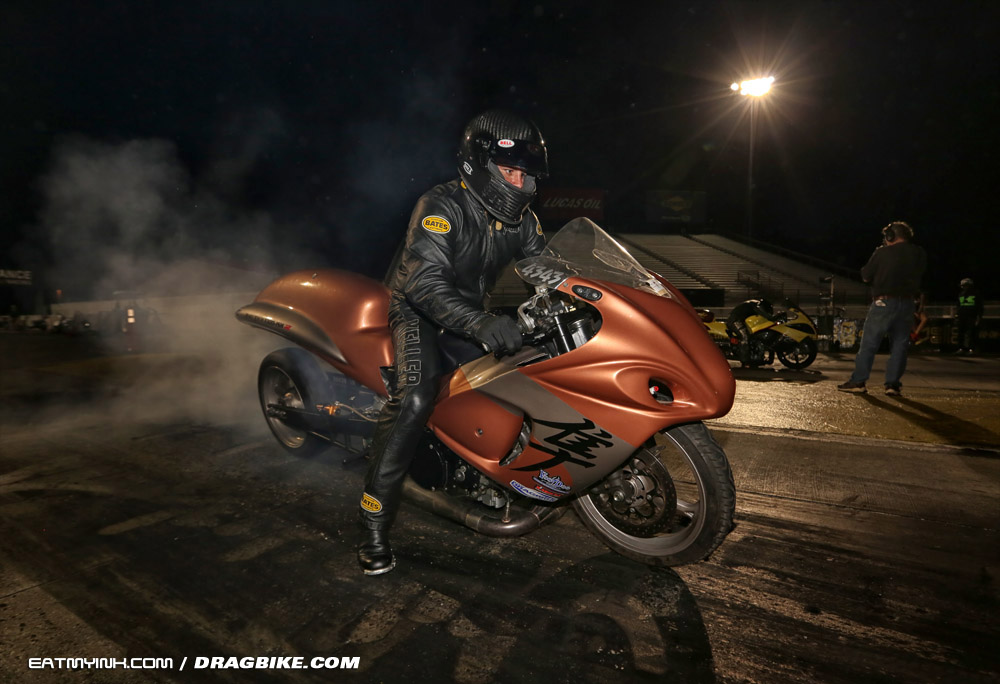 Three racers entered Jr. Dragster, but never got the chance to race. As part of its family focus, NHDRO is committed to the Jr. Dragster class.

“We consider everybody at the track as family, and family are the ones that showed up this weekend, regardless of the forecast,” said Niki Welch. “We just really appreciate the racers that stuck it out with us. Several people come in registration saying, ‘I don’t care if it rained all weekend, I would come anyway.’ And we certainly appreciate that.”

NHDRO allowed racers who arrived on Saturday but didn’t get a chance to qualify to come and register before they left on Sunday after the race was announced as postponed. “That way we would at least know that they were here,” said Niki.

So the Midwest’s largest all-motorcycle drag racing series is now set up for its biggest race ever at Lucas Oil Raceway on July 30-August 2. There will be over $110,000 in payout, including the $62,000 BB Racing Bracket Shootout on Saturday. The June race finishes on Friday, and the normal racing schedule is set for Sunday.

You will want to be part of the NHDRO family as they come back to the best track on the planet for The Big Show.