England took the final round over Norwalk legend Kevin Adams. Rylan Rowe was number one qualifier.

“I really have to thank Larry Phillips of Hardcore Cycles,” said England. “He’s helped me a lot this off-season leading up to this race.” That includes lending England his set of Bates Leathers. 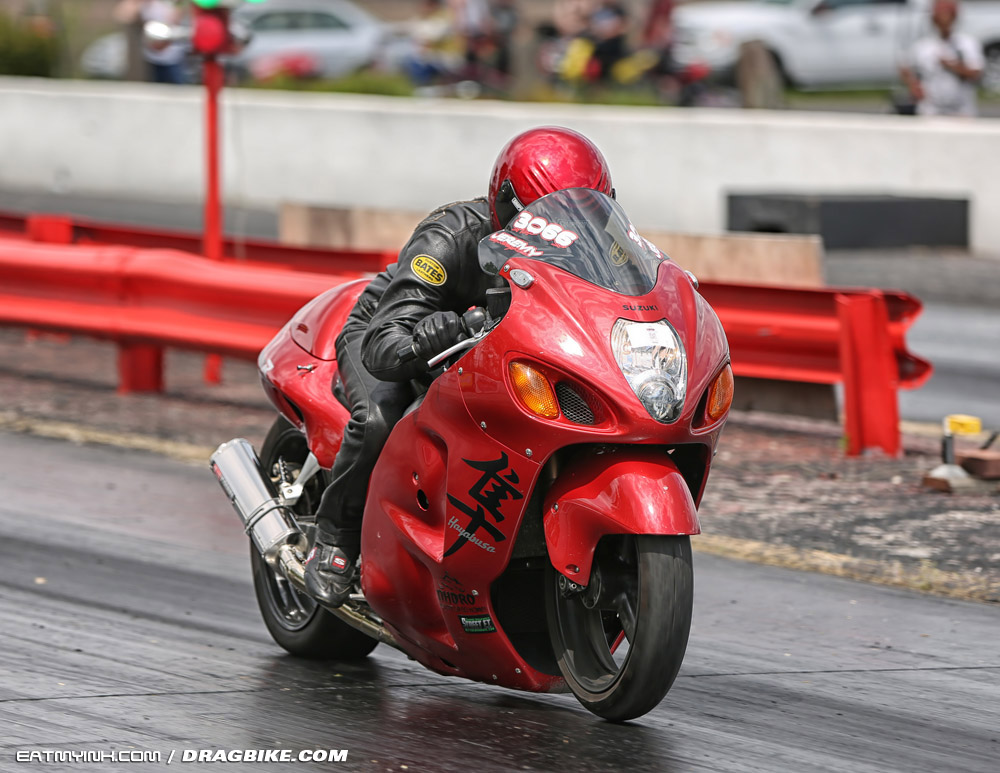 David Beshara had his beloved “Lunch Money” ’08 ‘Busa stolen out of his Columbus, Ohio garage last July. “I almost gave all this up,” Beshara said about racing. But he saved up his milk money to buy and build another copper ‘Busa and rode it to the M2. Shocks Crazy Comp win, beating multi-class NHDRO champion Dustin Lee in the final. Greg Highsmith was number one qualifier. 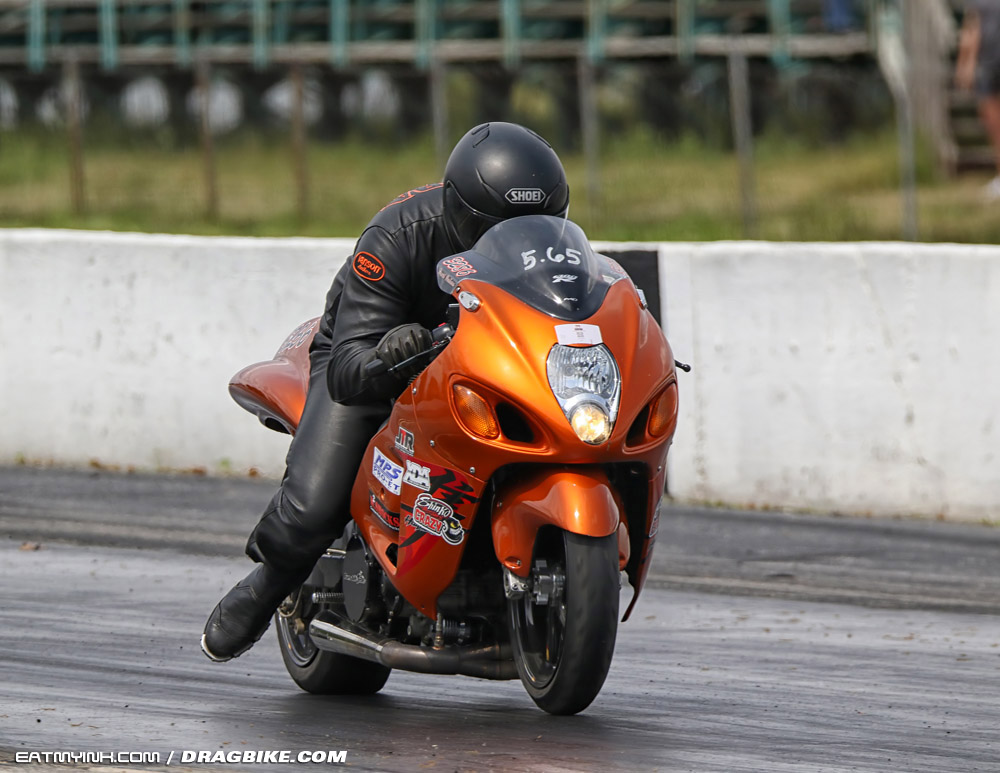 “Jeremy and Crow Teasley talked me into buying the bike that they had, and with the wife’s approval I did just that. I have spent the last six months working on this bike and it’s finally doing what I want it to do.

Ron “Ju-Jitsu” Arnold went -.0004 red (yes, you read that right) in the Kevin Dennis Insurance Street ET final against Tylan Beckelheimer—whose bike shut off as the tree came down! “I was lucky!” said Beckelheimer, who’s been dealing with an electrical problem. “I wasn’t sure the bike would start back up, but it did.”

Once restarted, Beckelheimer cruised down the track for the win. “Someone was watching over me there! My bike has been doing that lately and we have yet to run down the problem, but we will have it figured out before next race. I got Jeremy (Teasley) on my side for that kind of stuff—I just gotta ride! Big thanks to Jeremy.” 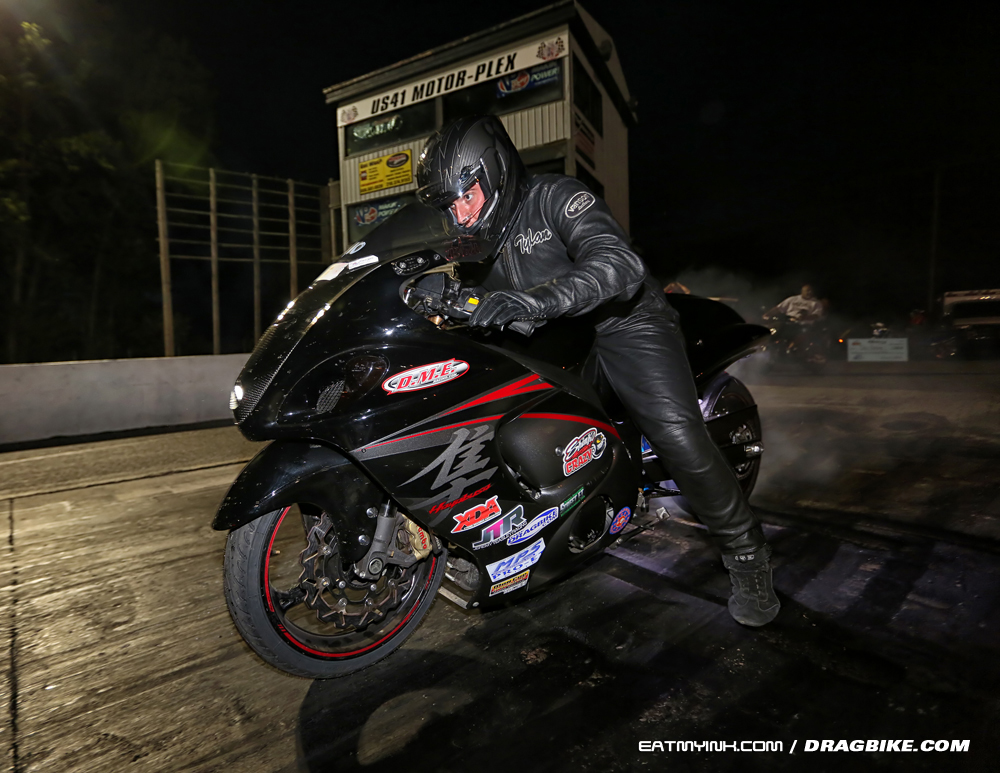 Iowa racer Bruce Damewood claims to have been in a slump, but no one seems to have noticed. The veteran wheelie bar racer won the Hardcore Cycles Top Gas final over Dan Jewel. The class was switched to eighth mile with a 5.10 index after rigid chassis riders expressed concerns over bumps at the transition at 660 feet.

“It was a tricky day for racing,” said Damewood. “We started out running a 5.34 on the first hit Saturday morning, then ran a 5.077 after the rain delay. There was a lot of time to second guess your tune-up.” 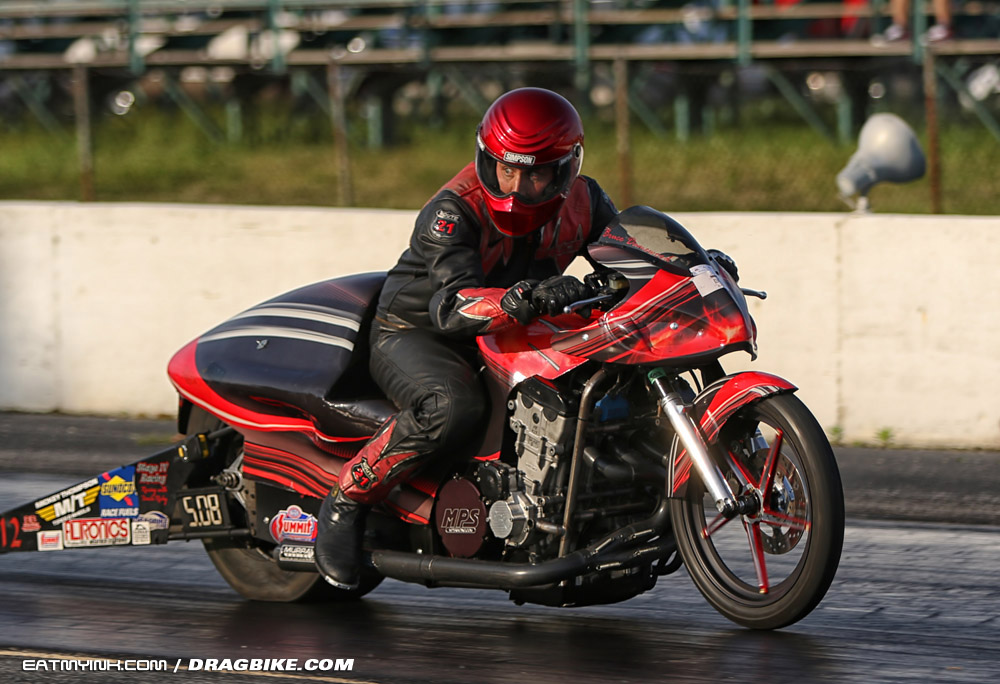 After Damewood took .020 at the tree, Jewel broke out chasing him down. Michael Hall was number one qualifier.

Kentuckian John “Spooky” Markham won the MPS Pro ET final against Mike Krueger, who redlit. “After racing against every opponent and the track conditions every round, I felt awful lucky to come away with a win,” said Markham. 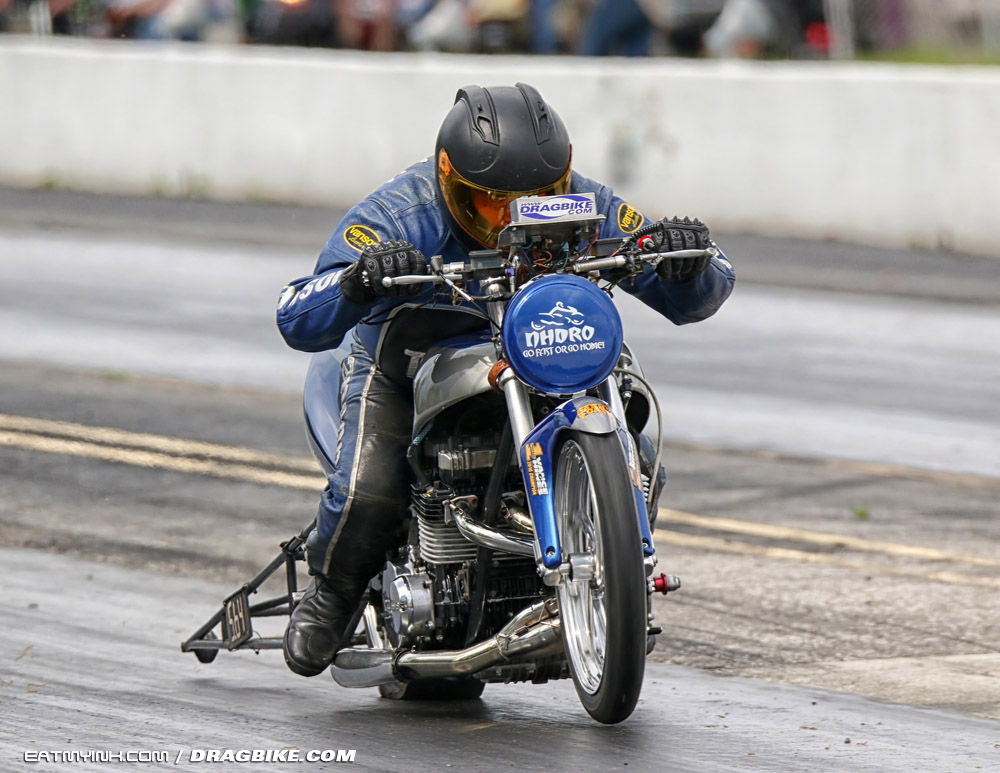 “Thanks to my sponsors Millennium Trailers, Xtreme Motorsports, and MPS Racing. I’m looking forward to heading to St. Louis for the next NHDRO!”

Bob Foster won Pro Ultra 4.60. Bob went to the final against legendary Johnny Bond, where Foster took the tree and the win. Sammy Gibbs was number one qualifier. 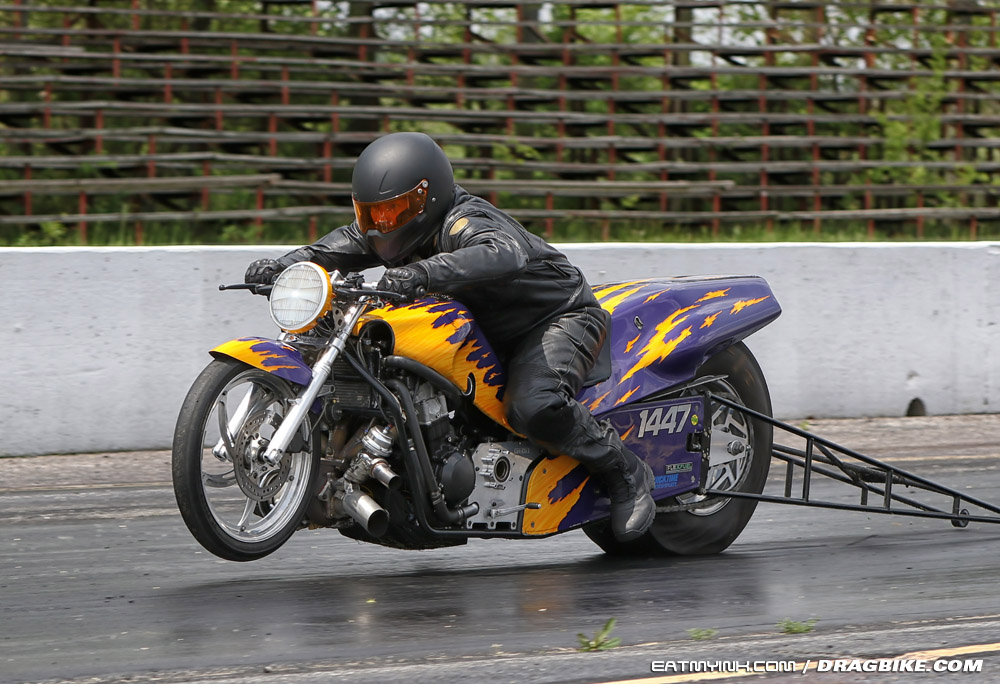 The thing many will remember about NHDRO’s trip to Morocco will be the especially festive and active VooDoo Grudge session. All freeform grudge sessions are made better when punctuated by some sort of structured event, and in this case it was a Street Tire Shootout. 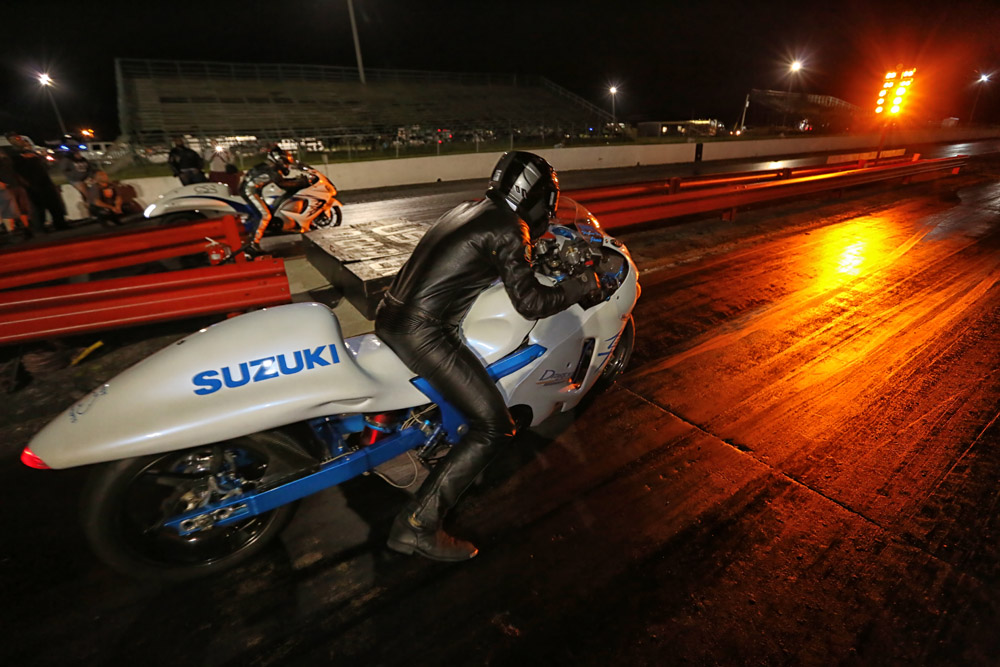 The Shootout boiled down to two white ‘Busas—Joey Jobbe on Jamie Hendrick’s short pipe bike and Money Mike Studebaker on his OSR bike. The pairing of that white ‘Busa and Studebaker are nearly unbeatable, and they were again on this occasion. 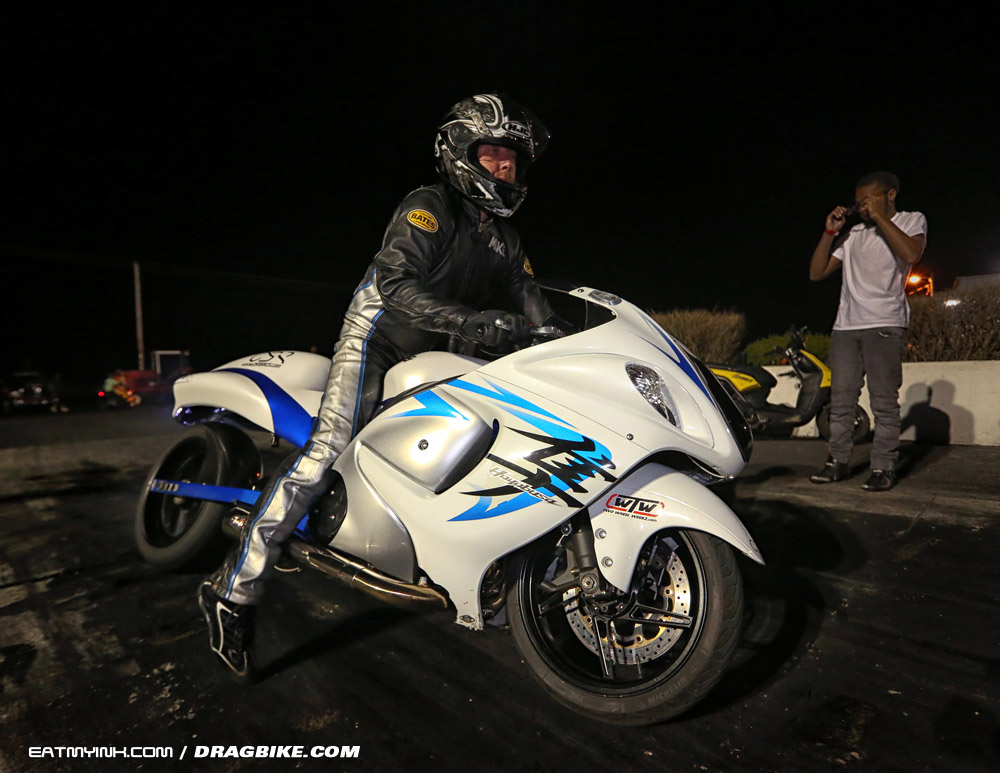 Hand-clutch big man Wiggle got the back wheel against small rider Joe Peters in the night’s biggest “real” grudge race. Wiggle shot out like from a cannon on an MSP-built and tuned “Exodus” and left Peter’s Flo-Tec oil-cooled GSXR behind.

Speaking of big men and grudge races, NHDRO’s own Brian Welch rode “Big Greezy” past Big Joe Holt in a race before the sun even went down.

Even Jeremy Teasley lost a grudge race when he spun on Slim P’s “Kong” against “My Time is Short But My Name is Richard” Long on 8 Below’s OMG.

Next up for NHDRO is a return to the Big Tracks—this time at World Wide Technology at Gateway in Madison, Illinois just across the river from downtown St. Louis. Brian and Niki Welch look forward to welcoming the NHDRO family there for the Kenneth R. Schwartz attorney at law Motorcycle Madness Nationals on June 7-9.