When America’s fastest growing motorcycle drag racing series holds their annual Big Money Bracket Race, you can expect more than 200 entries shooting for cash in those classes alone and that’s what you got. NHDRO’s Summer Celebration at Lucas Oil Raceway on August 4-6 featured the finest two-wheeled ET studs from all over the USA racing ‘til 11 pm for Brian and Niki Welch’s money.

Saturday’s MPS Pro ET race paid $5000 to win, and eight rounds later, the final was devoid of NHDRO regulars as interlopers swooped in for the Big Checks. Kyden Mann of Fort Wayne used an .021 light to set the stage for his all-dragbike final round victory over Homer England of Ohio. NHDRO dominator John “Spooky” Markham and Norwalk legend Craig Adams—also on dragbikes—both went down in the semis. 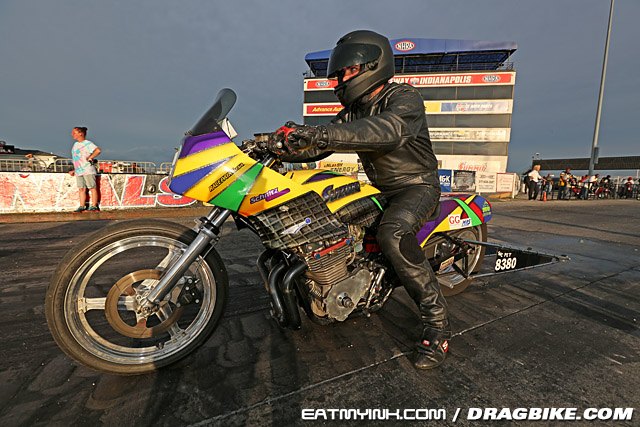 The Kevin Dennis Insurance Street ET field was even bigger, going nine rounds to determine who would take home the $3000 purse. In the end it was Mitch Pennington, riding a true hand-clutch Suzuki GSXR1000, who took the win despite leaving with a .105 compared to an .083 for runner-up Wes Brown, who broke out of his 9.05 dial-in. Brown was the only member of the usually-dominant Team DRR who made it to a Big Money final. 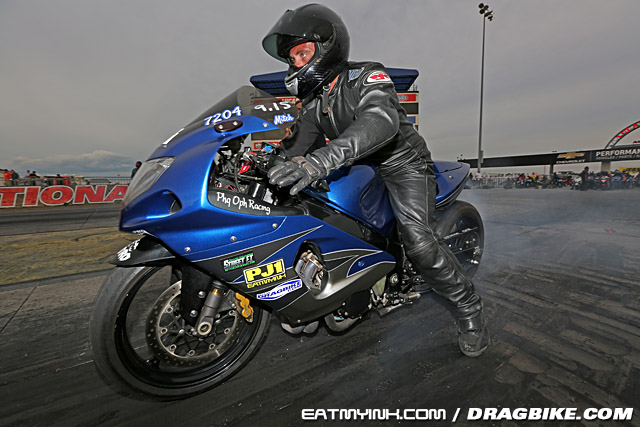 NHDRO’s Big Money Bracket Race is an event so good that it just may happen twice next year.

Sunday morning woke to broken dreams for everyone but Pennington and Mann, but also to a steady sprinkle. By late morning, competitors could see the writing on the wall and began packing up trailers for the drive home and at noon, NHDRO pulled the plug on Sunday’s eliminations.

Everyone’s phones showed more rain coming, but 4.60 class sponsor Jeff Lindeman called it perfectly. “We’ve all seen this a thousand times. If they decide to race, it’ll keep on raining. If they postpone, it will stop immediately.” And that’s exactly what happened, and through no one’s fault a perfect, overcast and mild day for racing was lost.

So that means two races on one weekend come September, a hectic double schedule as NHDRO staff and racers alike push though two days of racing, qualifying, and deciding of season champions.

That will also be the time that someone can attempt to claim NHDRO’s $50 bounty on Markham’s head in Route 21 Street Fighter. Markham has won every Street Fighter final so far this year, but it’s Illinois’ Scott Leonard that’s qualified number one this time around for the 9.50 index class. 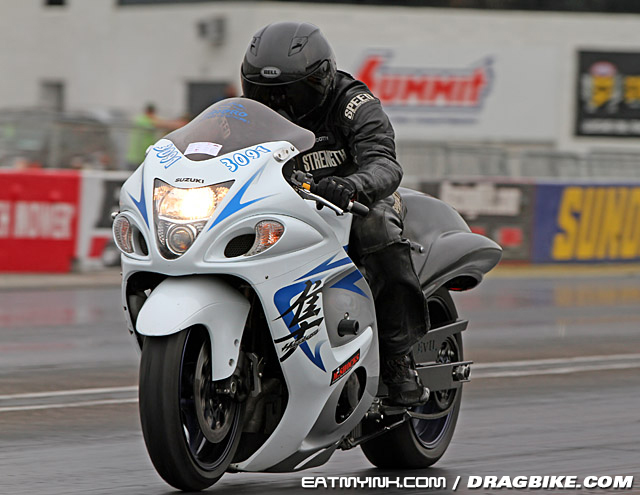 Stephen Knight is the Millennium Trailers Super Comp number one qualifier, just .001 off the 8.90 index on his no-bar ‘Busa. Two-time dragbike.com BAMF Dustin “Biscuits” Lee is the points leader. 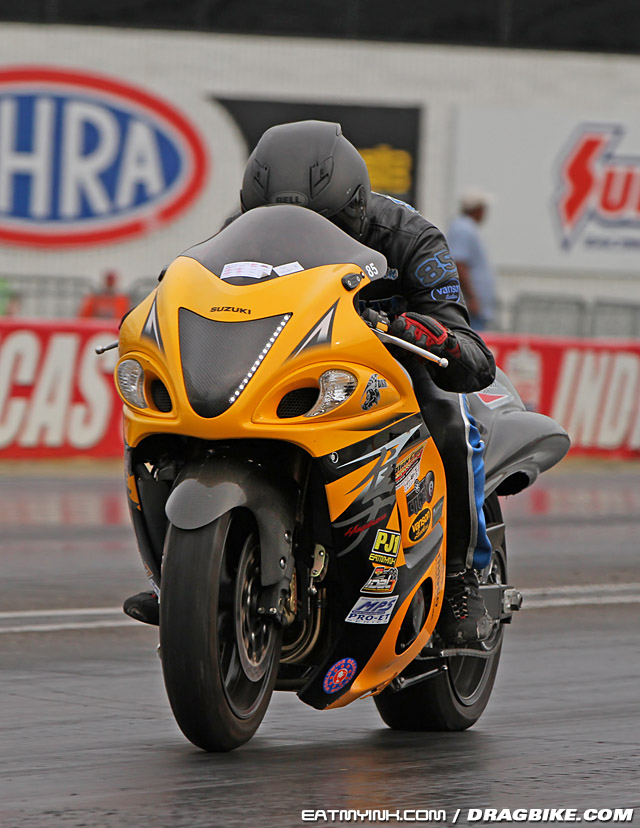 Lee also leads M2.Shocks Crazy 8s points and tied Brandon Teasley for number one qualifier with 8.882s. But Teasley nailed his first and carried number one into eliminations. Crazy 8s is the only class that got a round of eliminations in on Saturday night and—sadly for him— Teasley promptly lost to Tom Cooper. 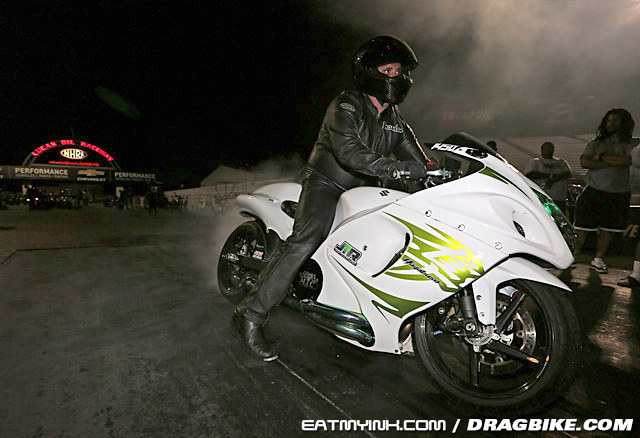 G&G Metal Spinners Top Gas points are led by Bradley Shellhaas, but Greenfield’s Ron Wheatley is number one qualifier with an 8.202 on the 8.20 index.

Fast Time Motorsports boss Jeff Jones is the Quicktime Motorsports/Lindeman Performance Pro Ultra 4.60 number one qualifier with a perfect 4.600. His teammate Chase Morris is number two and has a slim points lead over Lindeman. 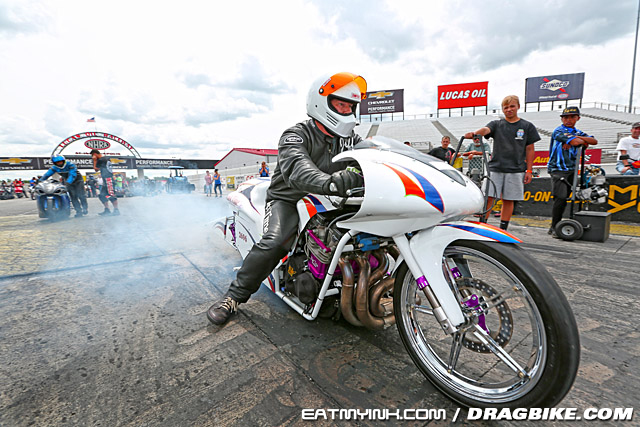 McIntosh/Grayson Machine & Fabrication Pro Street saw two bikes get bumped out of the 16 bike field, including Honda star Frankie Stotz. Louisville winner Justin Doucet led the first two rounds of qualifying, but Richard Gadson knocked him off the top spot with a 6.82 in the final round on Ronnie Mitchell’s Detroit-built “Apollonia” turbocharged Suzuki Hayabusa. What makes Gadson’s achievement most impressive is that this is the team’s first time out this year. 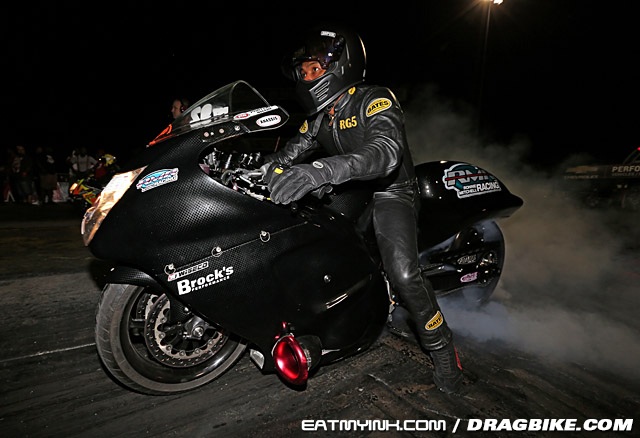 Pro Street eliminations—like all classes—will be run during qualifying for the World Finals, which will no doubt see NHDRO’s largest PST field of the year as the purse for the world’s quickest streetbikes increases to $5000 for that event. 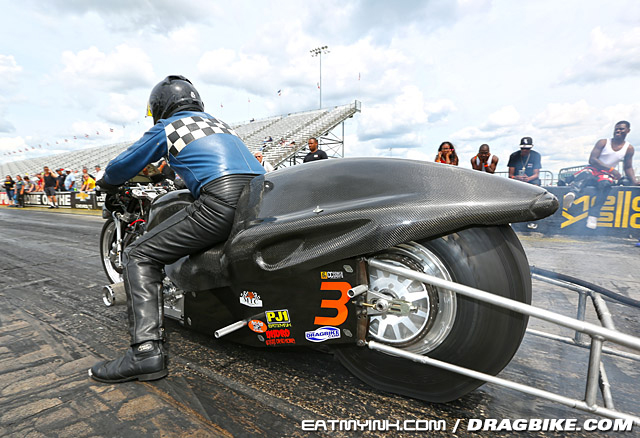 Ron Maddox finally showed back up to give HMH Motorsports Pro Open champion Chris Cutsinger a run for his money, and did just that. Cutsinger is still number one qualifier with a 6.62 at only 193 mph on his turbo ‘Busa, but Maddox rode a stirring 6.73 in a great side-by-side Q3 pass. Let’s hope Brian Lewis, Eric McKinney and others show up in September to ensure eliminations in this awesome class. 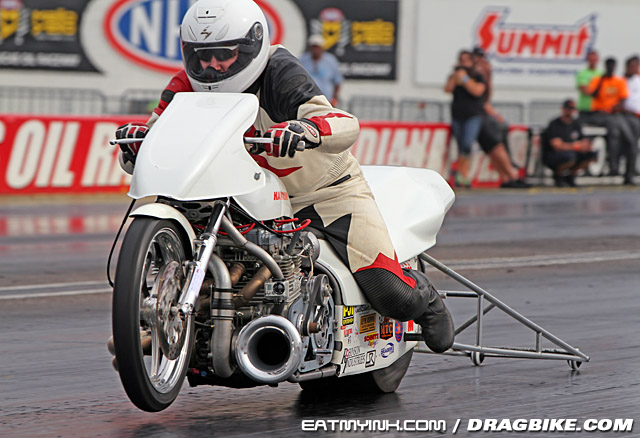 Saturday night did see an epic APE/Trac King Grudge race between Gadson on Johnny “Troubleman” Jackson’s H&H Racing-built and tuned “Trouble” ‘Busa vs. Jeremy Teasley on his own “The Grinch” Kawasaki ZX14R. Gadson launched to a quick lead off the starting line and held on for a tight, tight, three stack win. 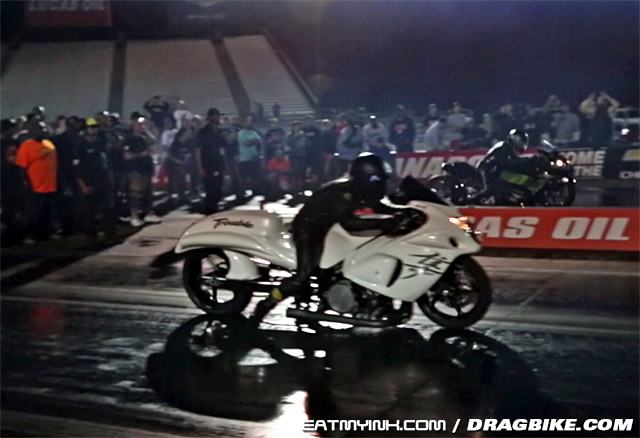 Joshua Engle won Rookie ET and Dustin Lee took Friday’s Running of the Bulls race that seems to be his birthright. 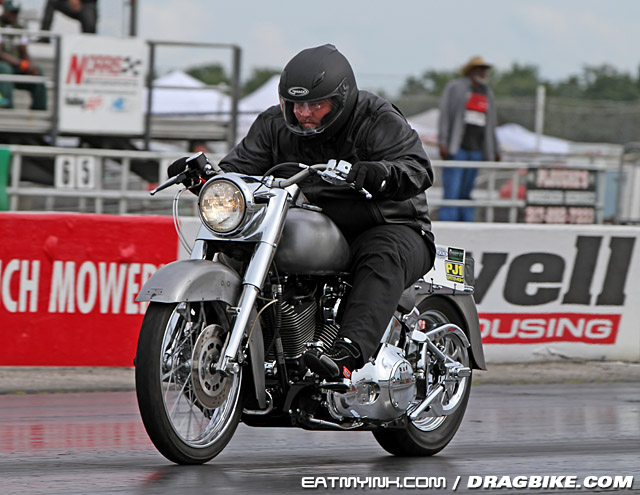 Brian and Niki Welch can’t wait to welcome everybody back to Indy on September 29-31 for NHDRO’s World Finals and Pro Street Shootout—now doubly big and doubly important!