NHDRO Thrills in the Indy Chill

NHDRO Thrills in the Indy Chill

NHDRO—the Midwest’s largest motorcycle drag racing series—powered through unseasonably cold and windy weather with the May Bike Fest on May 13-15 at Lucas Oil Raceway in Indianapolis.

Sportsman qualifying and eliminations were shortened to the eighth mile because of Saturday’s exceptionally gusty conditions. The gales had died down by the time Pros ran at 5:00pm, so they ran the full quarter.

McIntosh Machine & Fabrication Pro Street bikes push their full fairings through the wind with as much horsepower in their little engines as the 2.2 liter, 1545 pound IndyCars do a few miles away at the Indianapolis Motor Speedway. Pro Street bikes apply all that power through one narrow strip of street legal rubber rather than the two ultra-wide, sticky race slicks that IndyCars get to use.

And still, even in gusty winds, Mark Paquette pushed his turbocharged Suzuki Hayabusa to new NHDRO records of 6.772 at 210.90 MPH on his way to the Pro Street win. We’ll let the IndyCar guys and gals ponder that kind of performance for a while.

Paquette—who’s always been fast—credited his quickness and consistency to power that he and teammate Bud Yoder found on the dyno over the winter, and to the help of Penske shock specialist Cole Seitzinger with applying that power to the track. 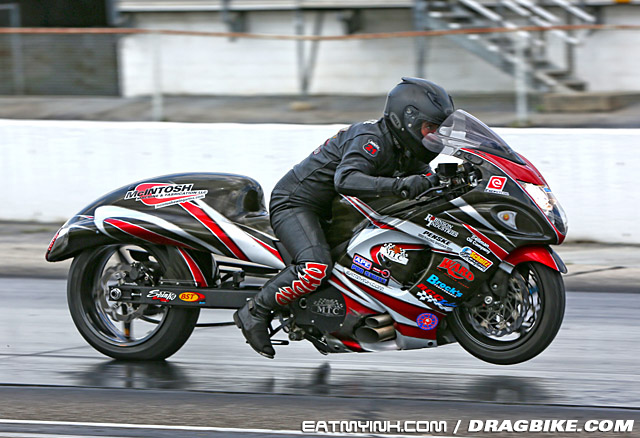 Yoder led qualifying with a 6.92 at 210, but failed to make the semi against Paquette after scattering a motor in the semifinals.

Huntsville winner “Mothug” Doug Gall nicked a piston in qualifying, leaving his motor’s disassembly to Dustin “High Beams” Lee, Ron Arnold and Team DDR (Distillery Drinkin’ Racers) while Gall hustled back to Ohio overnight for spare parts. The rebuilt motor lasted about 1000 feet—not far enough against Gabe Fredrick, who then lost to Yoder in round 2.

Huntsville runner-up Justin Doucet and the Two Wheel Werkz/HMH Motorsports ‘Busa were running well again this weekend until a -.003 redlight put Doucet out against Brandon Mitchan in round 2. Mitchan went on to defeat fellow surprise semifinalist Al Mart but lost to Paquette in the final, spinning when he plugged second gear. 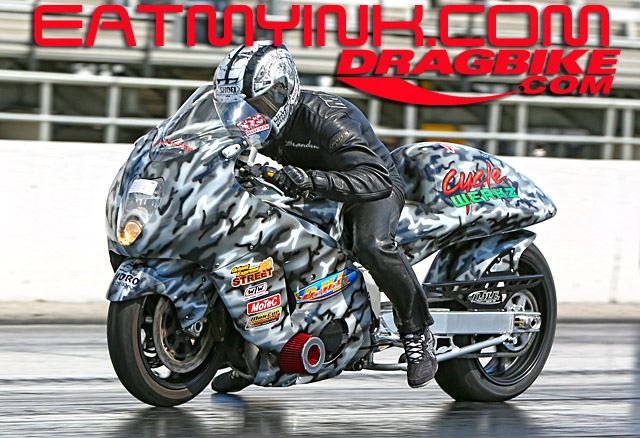 Quicktime Motorsports’ Rudy Sanzottera provided some excitement when his tail section slipped out from under him at about 150 feet in the first round. With only the pencil rod subframe supporting the beefy Sanzottera, he recovered and jumped back in the throttle before realizing the race was already settled in Mart’s favor. 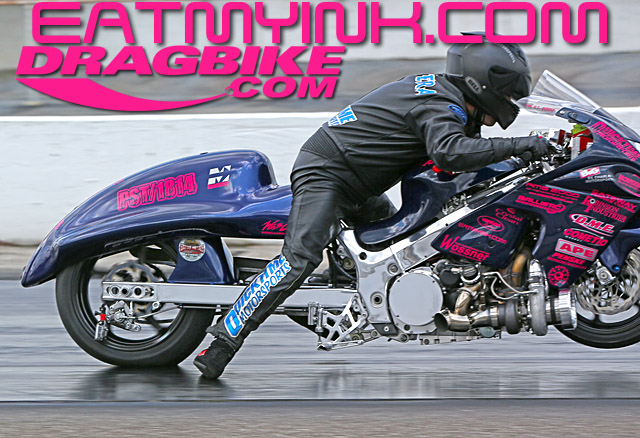 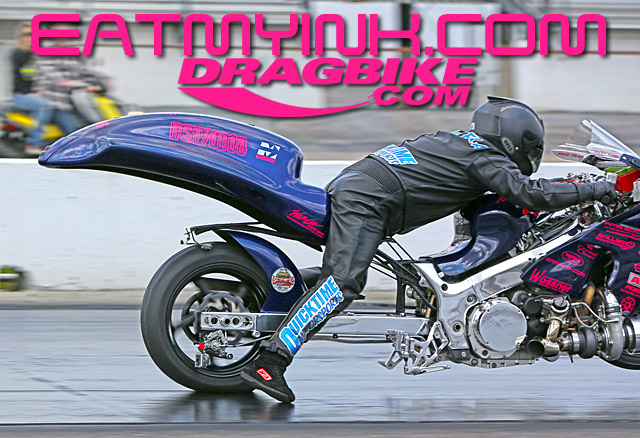 Huntsville Quicktime Motorsports/Lindeman Performance Pro Ultra 4.60 runner-up Chase Morris found the winners circle this time around on his Fast Time Motorsports Suzuki. Morris ceded the tree to Courtney Wheeler, whose bike popped loudly at about 60 feet and fell off to a 4.71. 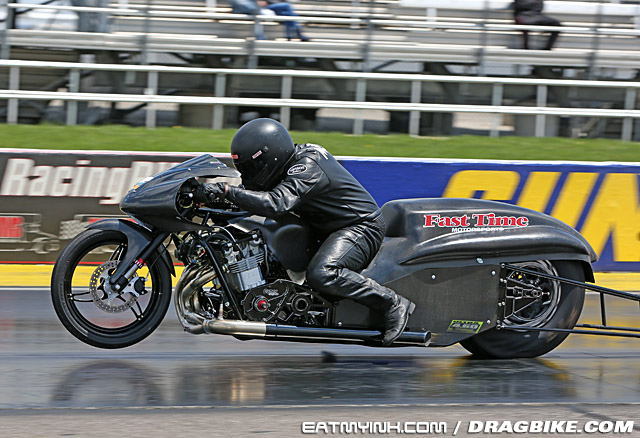 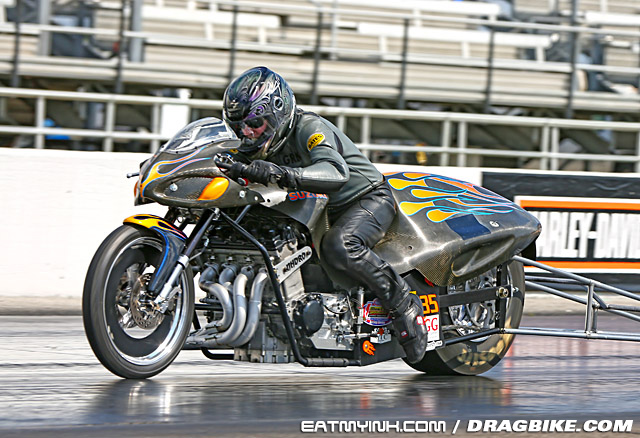 Mallett also won Sunday’s MPS Pro ET final over Ricky Scott by virtue of a .005 light. Saturday’s Pro ET win went to another double winner—Iowan Bruce Damewood. With only .001 between Damewood’s .017 light and fellow finalist Joe Deck’s .016, both riders went for the stripe and Damewood took it in a double breakout. 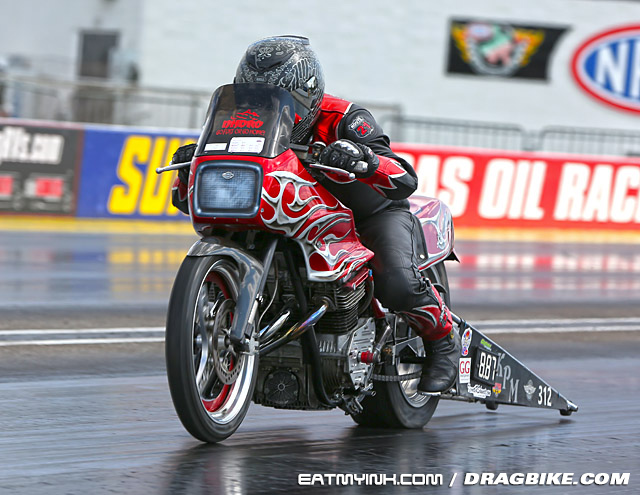 Damewood also had an .017 against Dragbike.com BAMF Dustin Lee in Sunday’s Millennium Trailers Super Comp final. Lee’s .057 had him chasing Damewood down and breaking out.

Route 21 Street Fighter went to veteran Ohio racer Rocky Ward, who slapped a .006 light on Nathan Hollingsworth in the final. 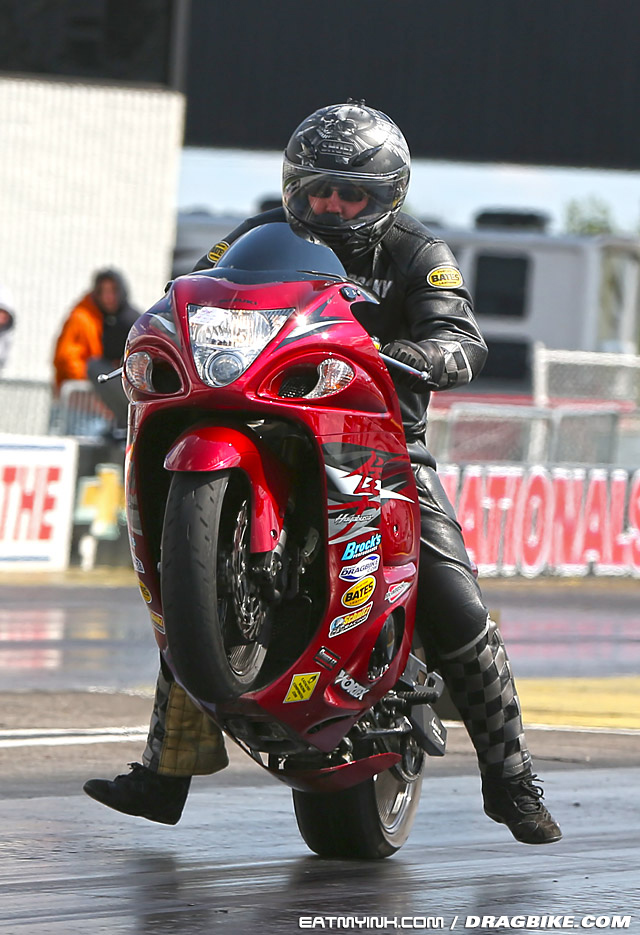 Jordan Vollmer took out all the usual suspects in Motorcycle House Crazy 8s, beating superstar Jeremy Teasley in the final. Vollmer and his Kawasaki ZX14 put a small advantage on Teasley at the tree, and held on while Jeremy broke out at the stripe. 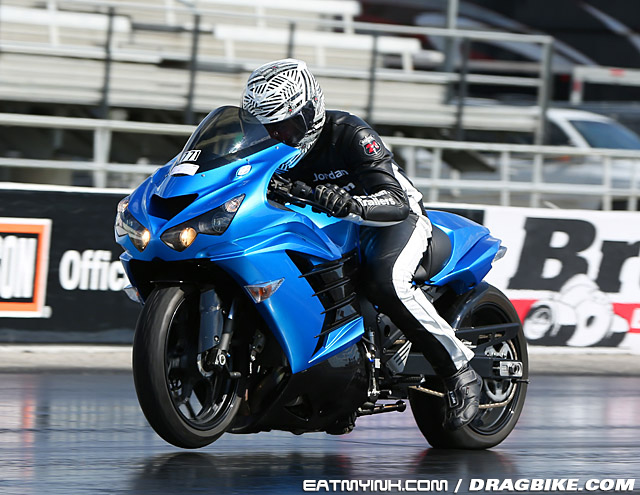 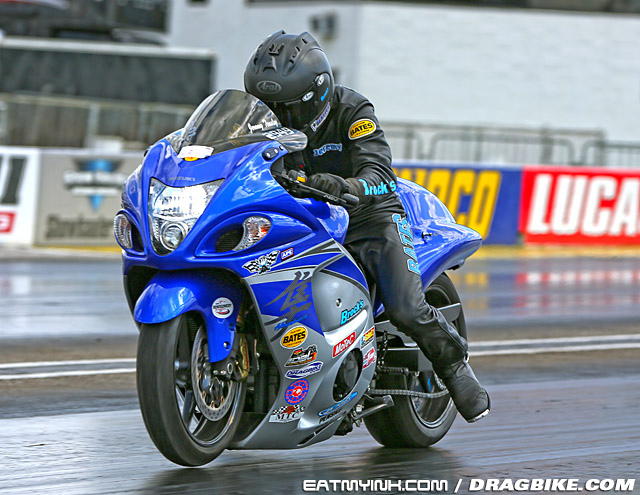 It was a near-deja-vu experience for Knight, who also lost Saturday’s Street ET final to a Teasley—Jeremy’s brother Brandon. Both bikes were slow off the line in that one, with Knight breaking out. 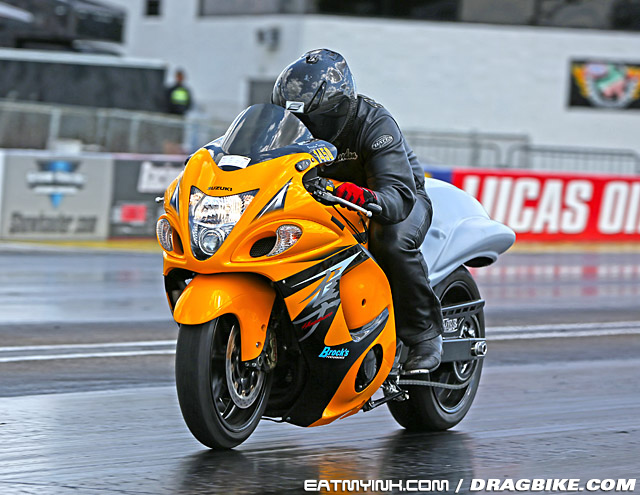 With a short field, HMH Motorsports Coatings Pro Open ran as an exhibition. Chris Cutsinger completed his recovery from offseason heart surgery, making a sweet 6.84 pass at only 174 mph on his turbo ‘Busa Funnybike. Ron Maddox also made passes throughout the weekend. 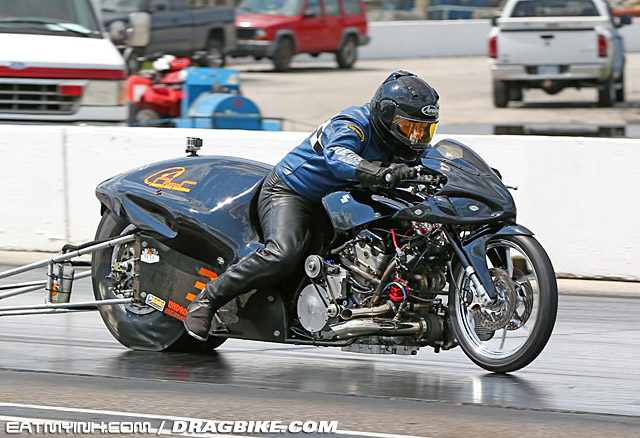 Brian and Niki Welch thank the NHDRO family for their support and look forward to seeing everyone at Gateway Motorsports Park near St. Louis for June 3-5’s Motorcycle Madness!