NHRA officials announced the 24-race 2020 NHRA Mello Yello Drag Racing Series schedule, which will again feature intense racing action at tracks across the country. Millions of fans will experience sensory overload at its best with side-by-side racing action where victories may be determined by mere thousandths of a second. Competition schedules for individual categories will be released this summer.

Throughout the season, NHRA will celebrate the 50th anniversary of Pro Stock Car. Fans will experience special treats and features along the tour to commemorate this important category and honor its history.

A special highlight on the 2020 tour will be the 60th annual Lucas Oil NHRA Winternationals, which will kick off the 2020 season at Auto Club Raceway in Pomona, Calif. February 6-9. One of the most iconic events in the series, the Winternationals draws fans from all around the world to experience the power of NHRA Championship Drag Racing at its best during the season opener. 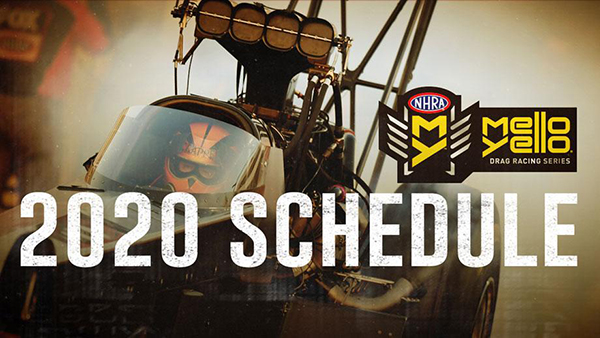 All locations on the series schedule are confirmed for the 2020 season and several stops are changing dates. The Virginia NHRA Nationals in Richmond, Va. move to the end of the month, taking place May 29-31. The Route 66 NHRA Nationals in Chicago will commence July 9-12 to lead in to the iconic Western Swing. Fans of the NHRA New England Nationals will get a chance to see the series as competition heats up at the end of summer, August 21-23. Two events in the Mello Yello Countdown To The Championship are changing places with the NHRA Carolina Nationals in Charlotte, N.C. September 25-27, followed by the AAA Insurance NHRA Midwest Nationals October 2-4.

As always, the 2020 season will conclude with the Auto Club NHRA Finals, November 12-15 at Auto Club Raceway in Pomona.

All 24 events in this exciting series will be aired exclusively on FOX Sports with select events on FOX broadcast network. With over 575 hours of programming, fans can tune into action from Friday and Saturday qualifying rounds as well as Sunday finals.