Steve Johnson had a huge turnaround this weekend in Las Vegas, staying alive in the championship hunt with a run of 6.869 at 195.11 on his USA Electric Mac Rak Suzuki in his final round against Karen Stoffer, who left too early. After a miserable first-round loss at the most recent race in Bristol, Johnson bounced back in a major way, reaching the final round after defeating Charles Poskey, Angie Smith and Angelle Sampey. He then pulled off the win in the finals, picking up his third victory this season and ninth in the veteran’s career. Johnson also pulled within 20 points of Matt Smith with one race remaining in the 2021 campaign.

“It is very, very special to win this event, but it’s really about the championship,” Johnson said. “It took us 17 years to win our first national event and I’m a sucker for this sport. I really want to bring home a championship. I’d love to be a part of that championship fraternity and to be able to try to do it in our hometown is going to be really, really special.”

Stoffer reached the final round for the second straight race and 26th time in her career thanks to victories against Kelly Clontz, Jerry Savoie and M. Smith. Sampey also remains in championship contention, sitting 30 points behind Smith. 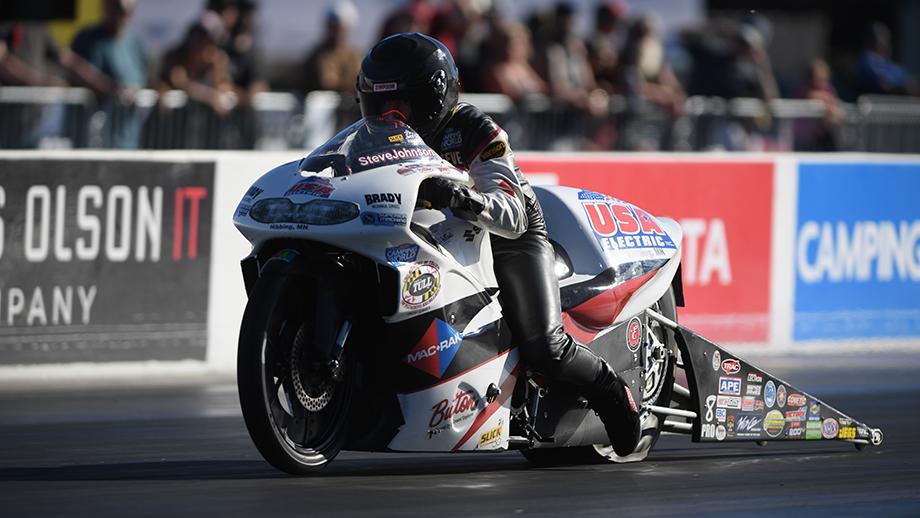 Matt Smith put together an impressive run to close out qualifying, jumping past provisional No. 1 qualifier Steve Johnson to claim the top position with a run of 6.839 at 198.23 on his Denso Auto Parts/Stockseth/Matt Smith Racing EBR. It hands Smith, the defending world champ and points leader, his fourth No. 1 qualifier in 2021 and 47th overall. Smith will face off with Michael Phillips in the opening round of eliminations, looking to cap off his weekend with another victory and move closer to back-to-back world championships.

“I made some tweaks today and made a change before Q3, and I didn’t figure we could pick up. But we ended up picking up everywhere and our bike went to the pole,” Smith said. “I know I’ve been in this situation the last four years here, and we’ve wrapped it up two of the late three years. I hope we can continue to do what we’ve done in the past, and I just want to go do my job. The way I look at it, if I win the race, I extend the points even more and that’s our goal.”

Needing a big weekend after considerable struggles in Bristol, Pro Stock Motorcycle’s Steve Johnson turned in a splendid opening day on Friday in Las Vegas, racing to the No. 1 position with his pass of 6.848 at 196.24 on his USA Electric Mac Rak Suzuki. If it holds, Johnson would pick up his fourth No. 1 qualifier this year and eighth this season. The championship hopeful needs a big weekend after a first-round loss in Bristol that dropped him 56 points out of first heading into Las Vegas.

Qualifying continues at 12:00 p.m. ET on Saturday at the Dodge//SRT NHRA Nationals presented by Pennzoil at The Strip at Las Vegas Motor Speedway.