21 NHRA Pro Stock Motorcycle teams entered the Gators and they qualified well with a stout 16 bike field revealing itself after the allotted three rounds of professional class qualifying. Angelle Sampey may barely stand five feet tall in height, but she was head and shoulders above all the rest with an eye-popping 6.742 ET at 200.00 MPH to lead the way in qualifying. She entered the DENSO 200 MPH club in the process and her Mike Mullaney chassis, with the build completed by the Vance & Hines Race Shop team, sent this new-era Suzuki right to the front of the class. 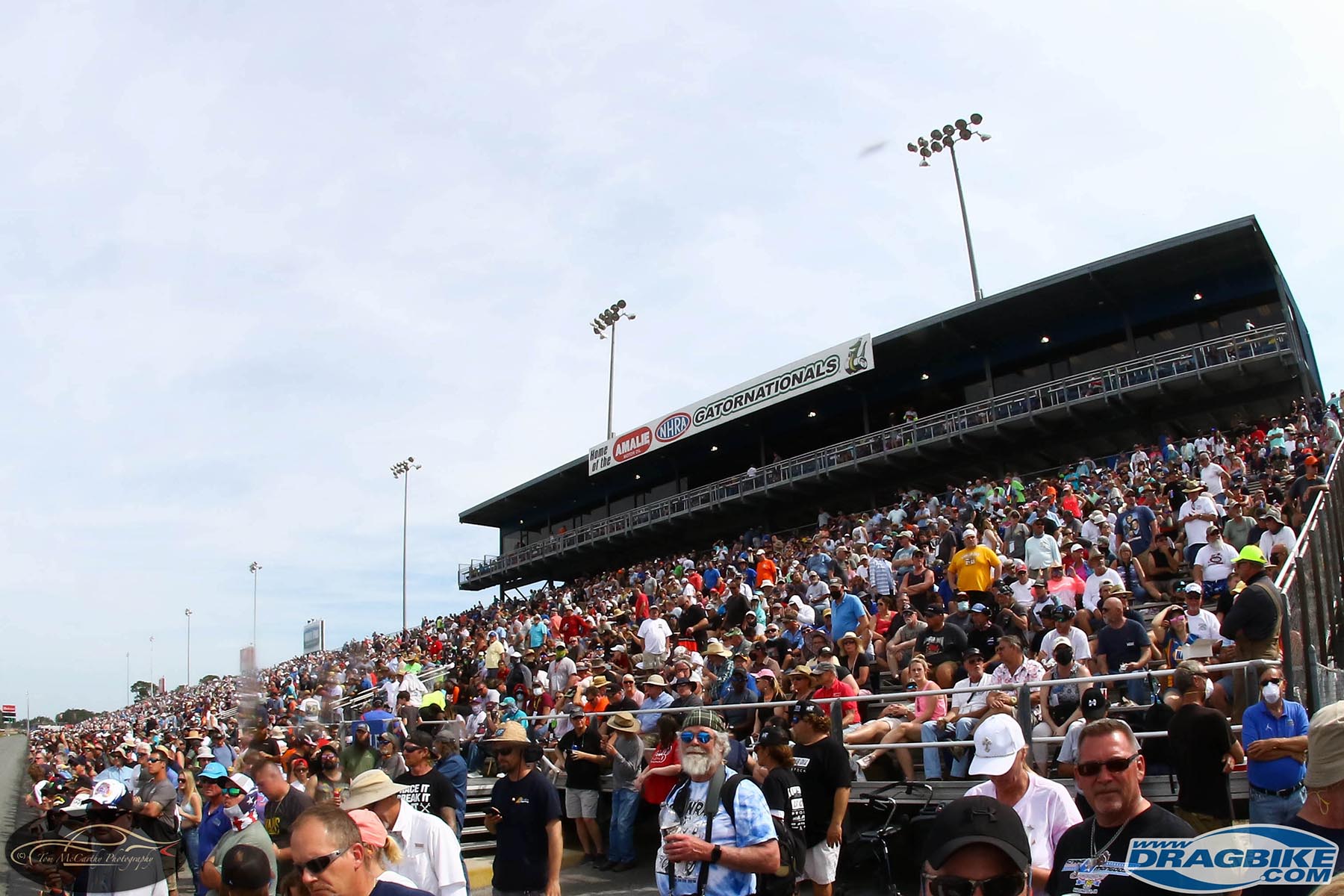 Her low qualifier was buttressed by her quick classmates right behind her anchored by the 6.924 bump-spot. Basically there was a two-tenths of a second spread between the #1 qualifier and the #16 anchor position. Add to this that 200 MPH qualifying passes were made by Angelle, Angie Smith, Hector Arana Jr, and the 2020 NHRA Pro Stock Motorcycle champion: Matt Smith. Man, what a show he put on for the Gainesville Florida motorcycle drag racing fans.

Matt qualified #2 right behind Angelle with a 6.768 and it should be noted here Joey Gladstone’s 6.783 is a harbinger of things to come from the Reed Motorsports wrecking crew. Once they establish their footing, things are going to tighten up even more. Not that this is of concern to Matt Smith who came out swinging for the fence and hit the home run at the Gators. 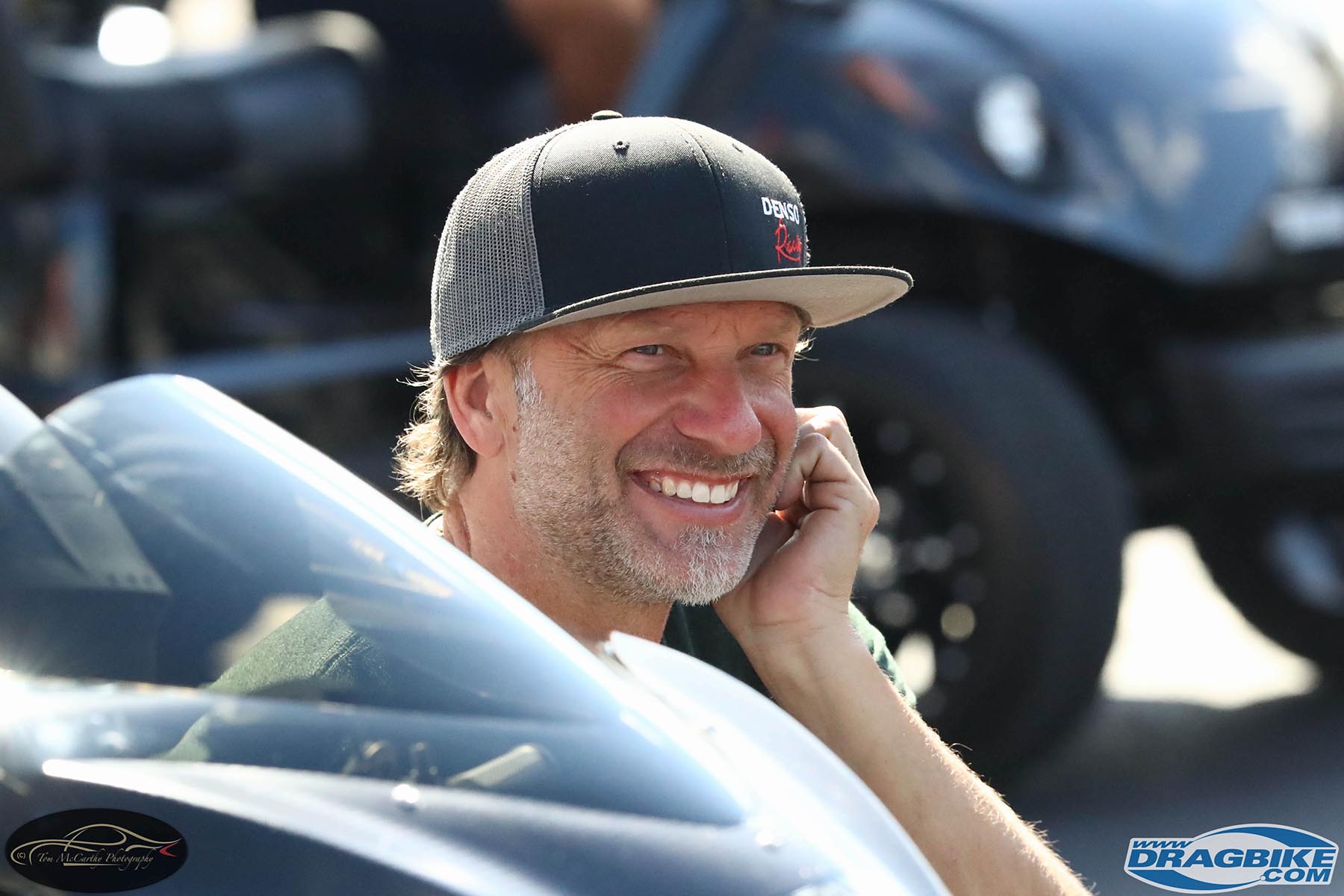 Matt’s pre-season testing confirmed what he knew, he’s definitely on the right high-performance path. From his second-place qualifying position, Matt dispatched, Jim Underdahl, Hector Arana Jr, Steve Johnson and Ryan Oehler to win the opening race of the NHRA PSM season. He did so with ET’s of 6.81, 6.80, 6.85 and 6.785 for each round win during eliminations. His astonishing MPH runs were, 200.89, 200.71, 200.29 and 200.89 MPH respectively. His driving and tuning skills speak highly of what he’s learned from his legendary father, Ricky Smith coupled with the tremendous skills he has honed over the many years. Matt Smith builds, hot-rods, and tunes all his own motors. If Dave Schultz were alive today – Matt Smith is the racer Dave would most want to line up against. Providing Matt could get by John Myers first.

Top Fuel Harley’s were in the house at the Gators with Rich Vreeland testing early on Tuesday and Johnny “Red” Rhea joining in the testing on Wednesday, with Mitch Brown driving the PTS TFH. Each team had moderately successful test sessions, followed by three rounds of qualifying that began on Friday and concluded Saturday evening.

Nine Top Fuel Harleys entered the Gators, with Rich Vreeland’s team leading the way, posting a 6.63 at 191.87, that stood as the #1 qualifier. Johnny Red Rhea’s team was the lone DNQ for the event as their “Barrel Valve” quit on them and they could not get a clean run down the track during qualifying. 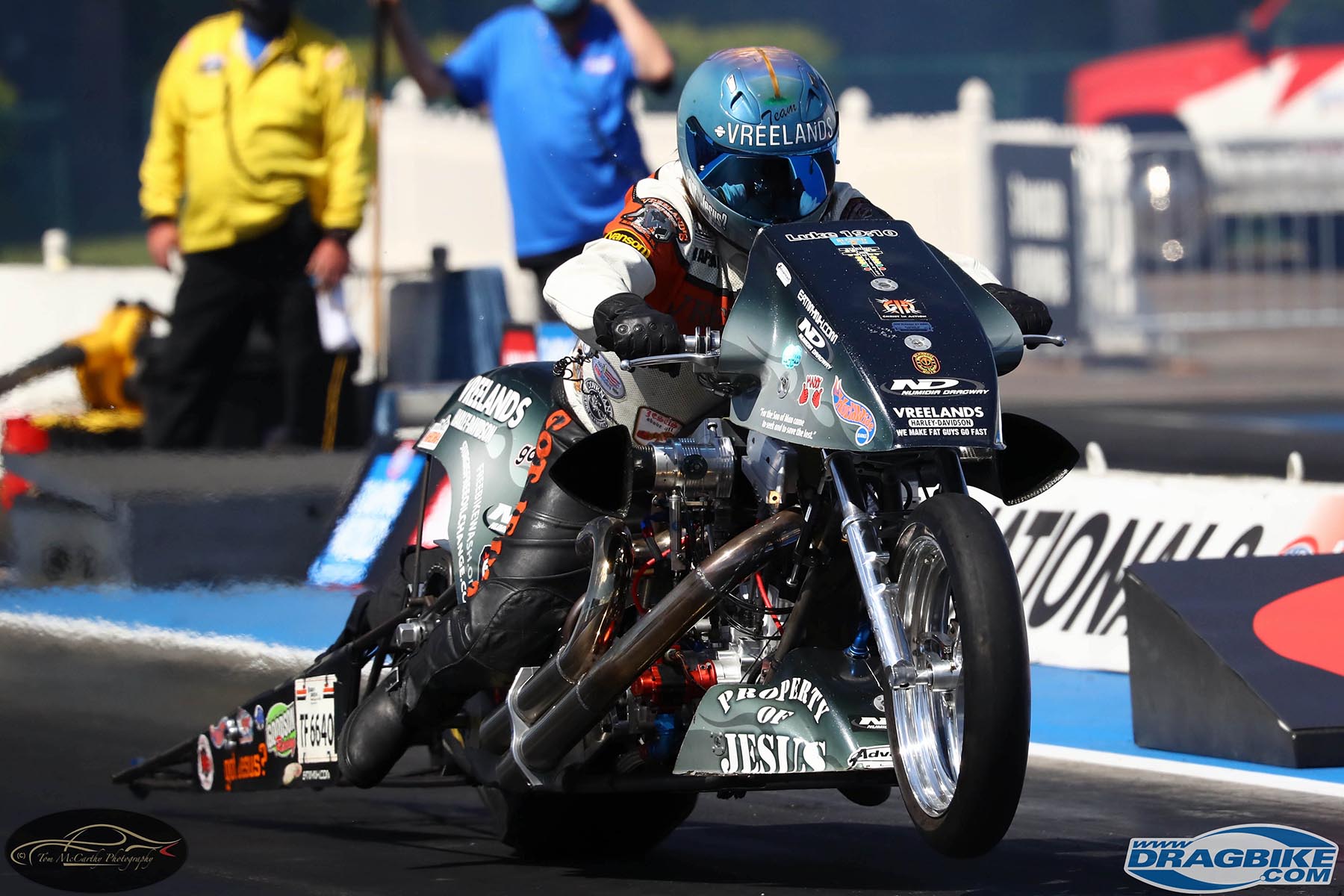 Eliminations for the Top Fuel Harleys were slated for 8:45am in the lanes and indeed the thunder bikes were cocked and loaded on time. At 9:15am when the first pair entered the water box, they did so with ambient conditions of 61 degrees, a track surface temp of 75 degrees and a traction meter reading showed 350nm in the center of the R lane at the starting line.

The racing began with Bobby Malloy storming down the left-lane posting a stout 6.39 at 219 MPH to take out Tyler Wilson’s 7.02 effort, on the Wilson Concrete TFH. Ricky House lowered the boom on Tim Kerrigan, 6.49 at 210mph to Tim’s 7.80 elapsed time. Tii Tharpe then dispatched Billy Jackson with a 6.42 at 213mph solo pass as Billy’s bike broke just after the burnout.

In the last pair out of the eight-bike qualified field, Randal Andras posted a 6.42 ET to just get by #1 qualifier Rich Vreeland, whose 6.50 at 202mph was his personal best pass on his TFH. Hat’s off to the Vreeland Harley Davidson team, who had one of their best NHRA outings ever.

During E-2, Randal Andras, the 2020 NHRA TFH champion, beat Bobby Malloy who was a little too quick on the tree with a .008 red-light foul start that sent Randal to the finals with a 6.36 at 213mph winning pass. Randal’s team-mate, Tii Tharpe, then stormed off to a solo pass win, after Ricky House’s bike suffered a mechanical mishap that ended Ricky’s weekend of racing. 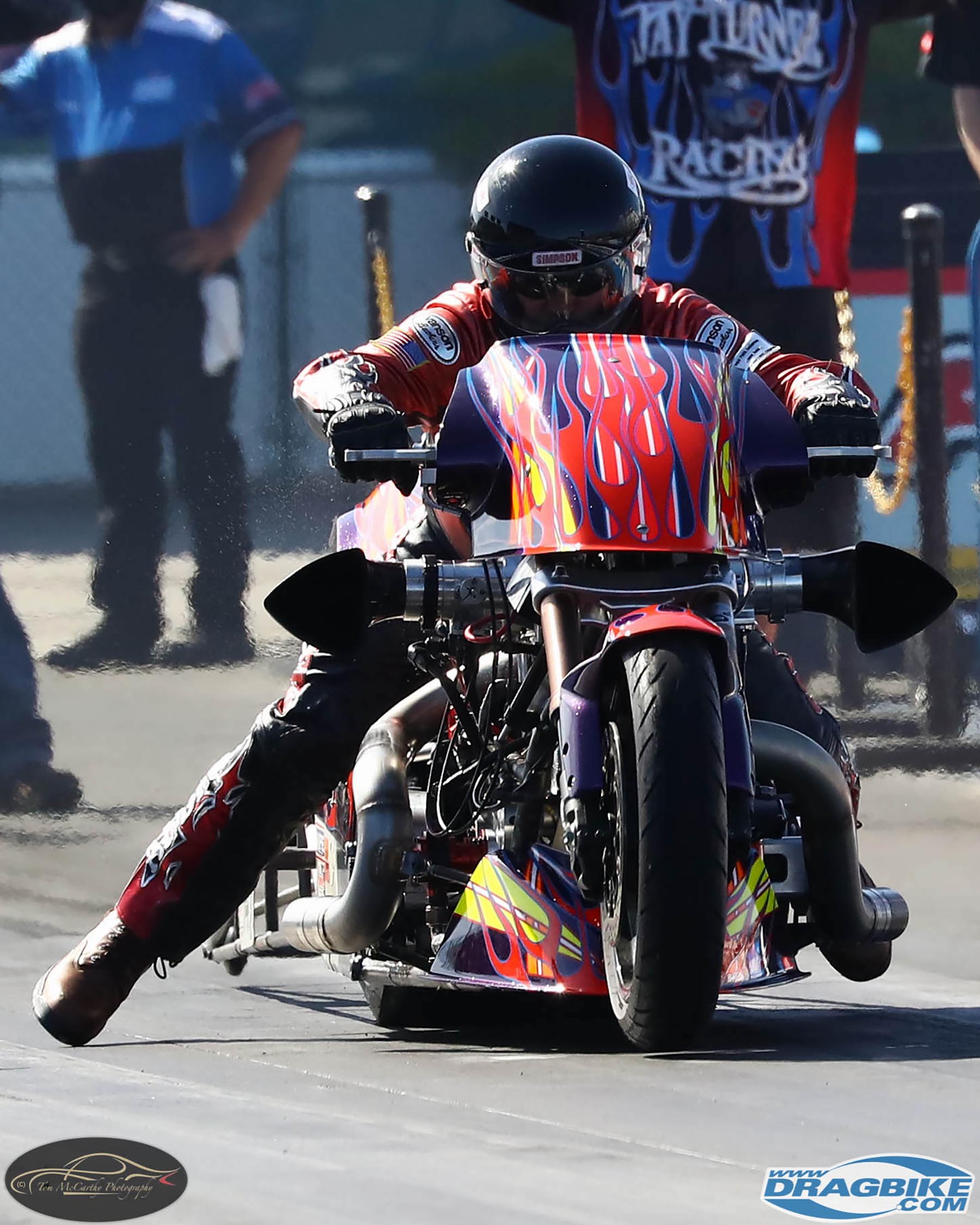 In the all “Jay Turner Racing” final round, Randal Andras of Louisiana, headed to the winner’s circle after a 6.40 at 213mph solo pass, as Tii suffered mechanical gremlins ending his chances for a win.

This race was a tough one for the Top Fuel Harley racers as they came into this race, knowing they had no class sponsor and no winning purse to compete for. Every one of the nine teams that entered this race spent somewhere between $2,000 to $3,000 each, as professional racers, to race for a trophy. Not just any trophy, but an NHRA Wally. It must be said here, professional drag racers do not normally go trophy racing. These teams did this for heartfelt reasons. 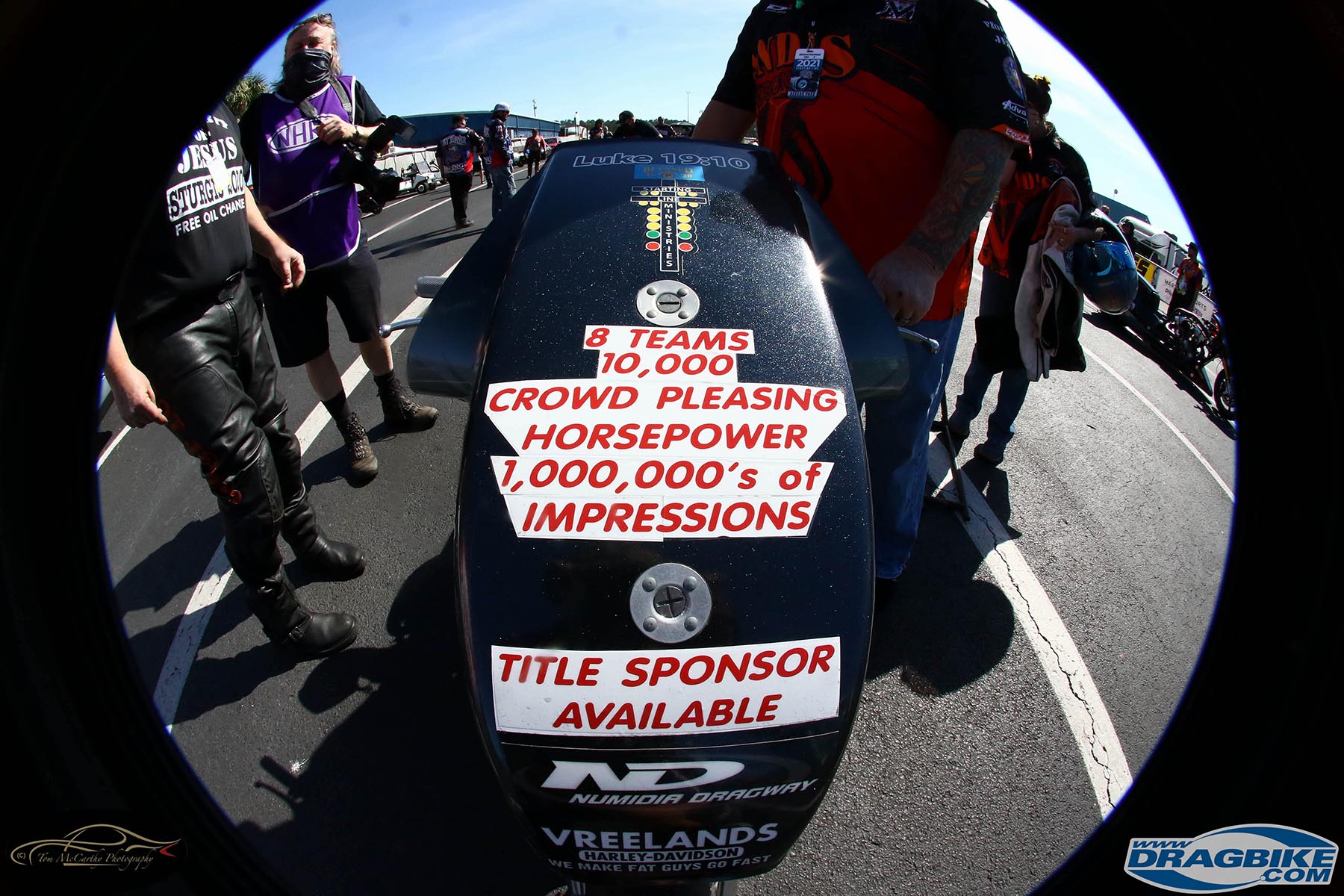 Professionalism and racing at the highest possible level means everything to these teams. They have been DECADES getting to where they are now. Both the National Hot Rod Association and the TFH racers are working together, in concert, trying to put together a season and find sponsorship to keep the class alive.

To be clear, the racers that attended this event did so more to support the class of Top Fuel Harley than to race for a trophy. The racers are serious: they want, seek, and need a class sponsor! NHRA is working with the teams to make this happen. It is unclear at the writing of this post-race report when or if the next NHRA TFH race will happen.