Sampey finished off a fantastic day in Pro Stock Motorcycle with her second victory in the Countdown to the Championship. In an all-female final round, Sampey beat Karen Stoffer on a holeshot on her Mission Foods/Vance & Hines Suzuki, as her run of 6.773-seconds at 196.85 held up. It gave Sampey her 45th career victory and second this season, as she pulled within 25 points of Matt Smith. That was a big moment, as was collecting the first Wally trophy for the class at Bristol. The category competed in exhibition races at the track in 1999 and 2000, but Sampey’s win marked the first points race for Pro Stock Motorcycle in Thunder Valley.

“I’ve been out here for so long, I’ve really learned to appreciate everything I get now,” Sampey said. “When I win a race, the emotions are 100 percent genuine because it’s a task to get it done. To get four round wins is really tough and it means so much to me. I love this sport so much and this team just works so hard. This mission was to catch back up in the points race and we made it happen. It was a fantastic day and it would be great to get the No. 1 back on the motorcycle.”

Sampey got to the final round with victories against Andrew Hines, Chris Bostick and Eddie Krawiec. Stoffer advanced to her second final round this season and 25th in her career thanks to round wins against Lance Bonham, Ron Tornow and points leader and defending world champ Smith in the semifinals. Smith also holds a 56-point lead against Steve Johnson heading to the final two events. 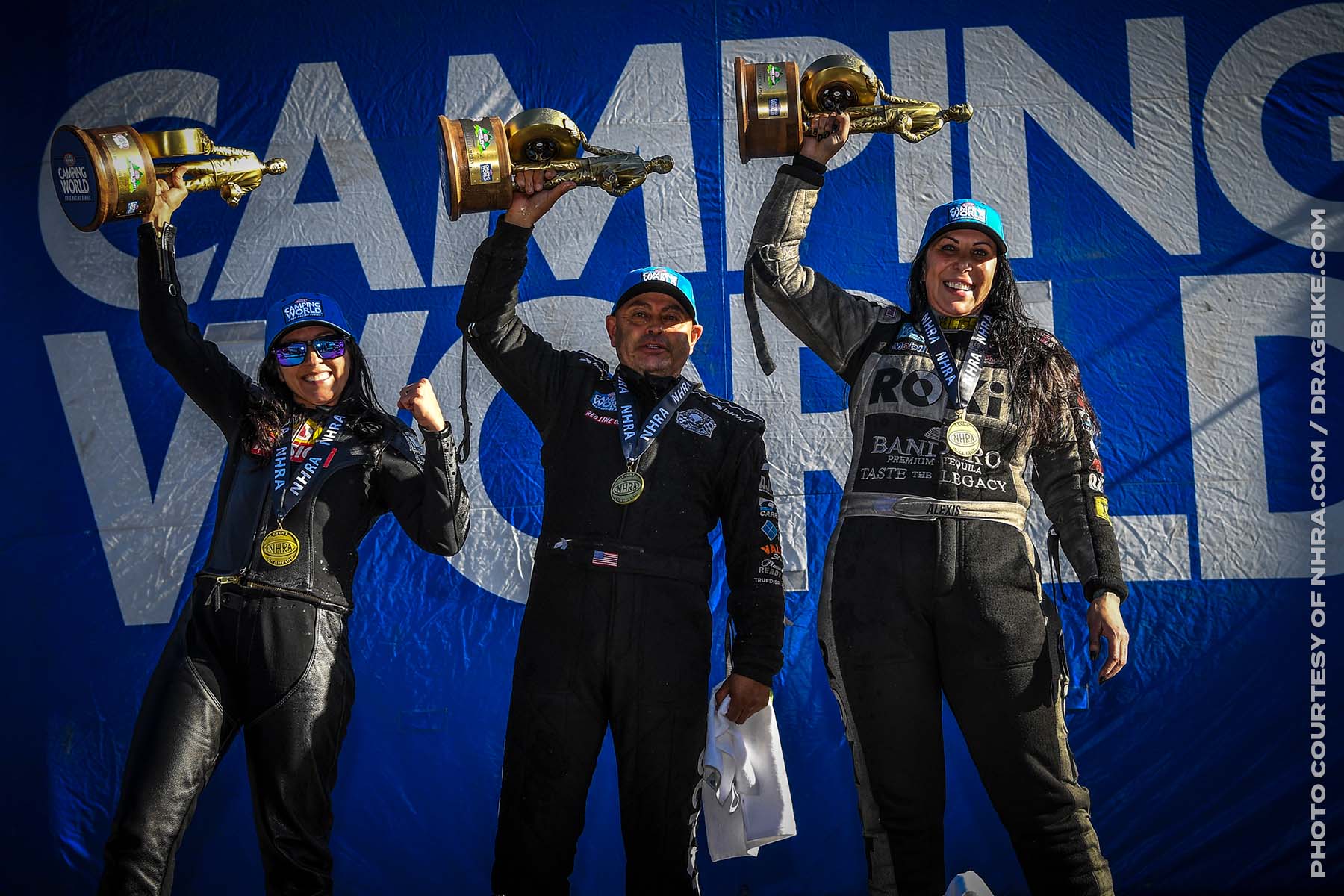 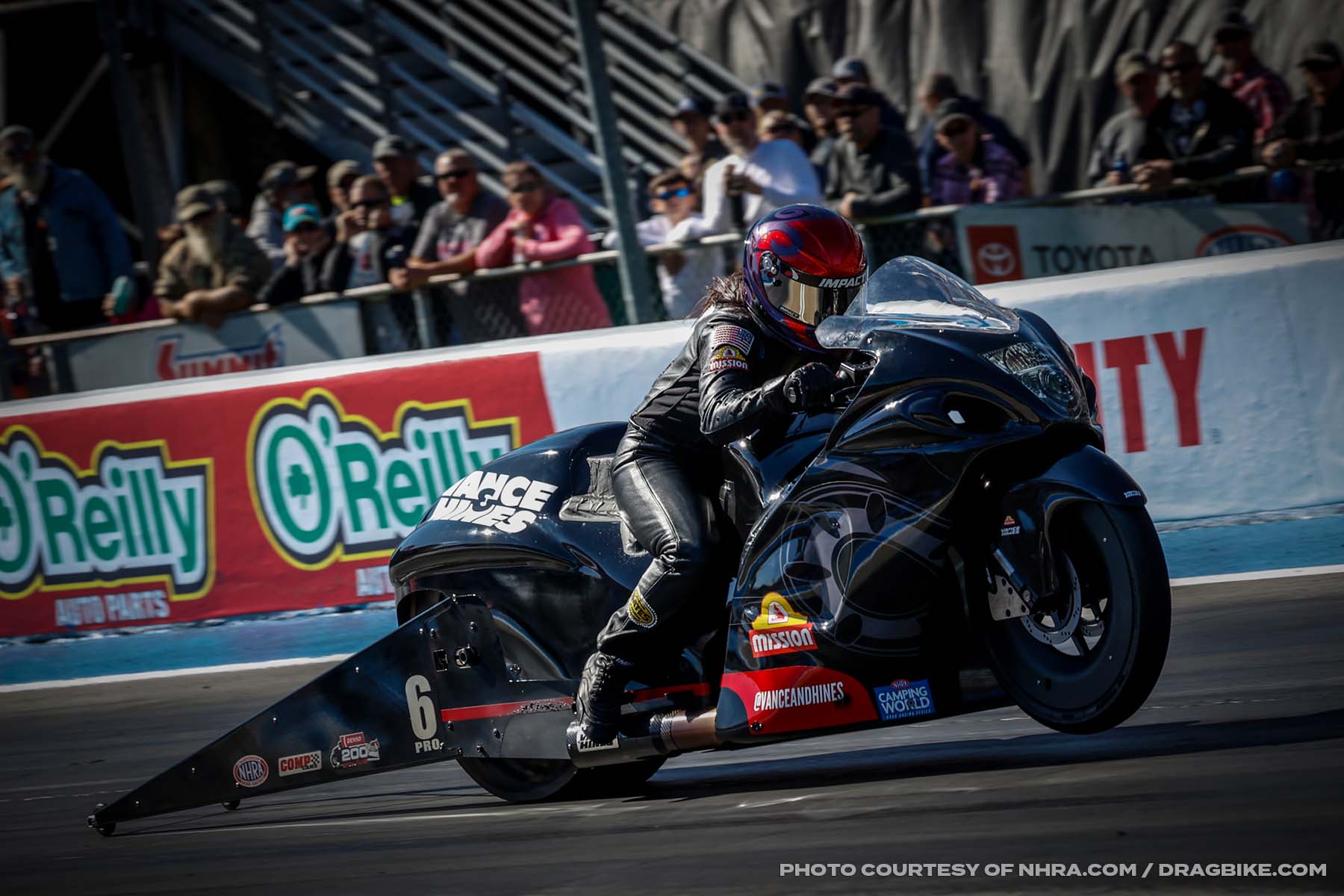 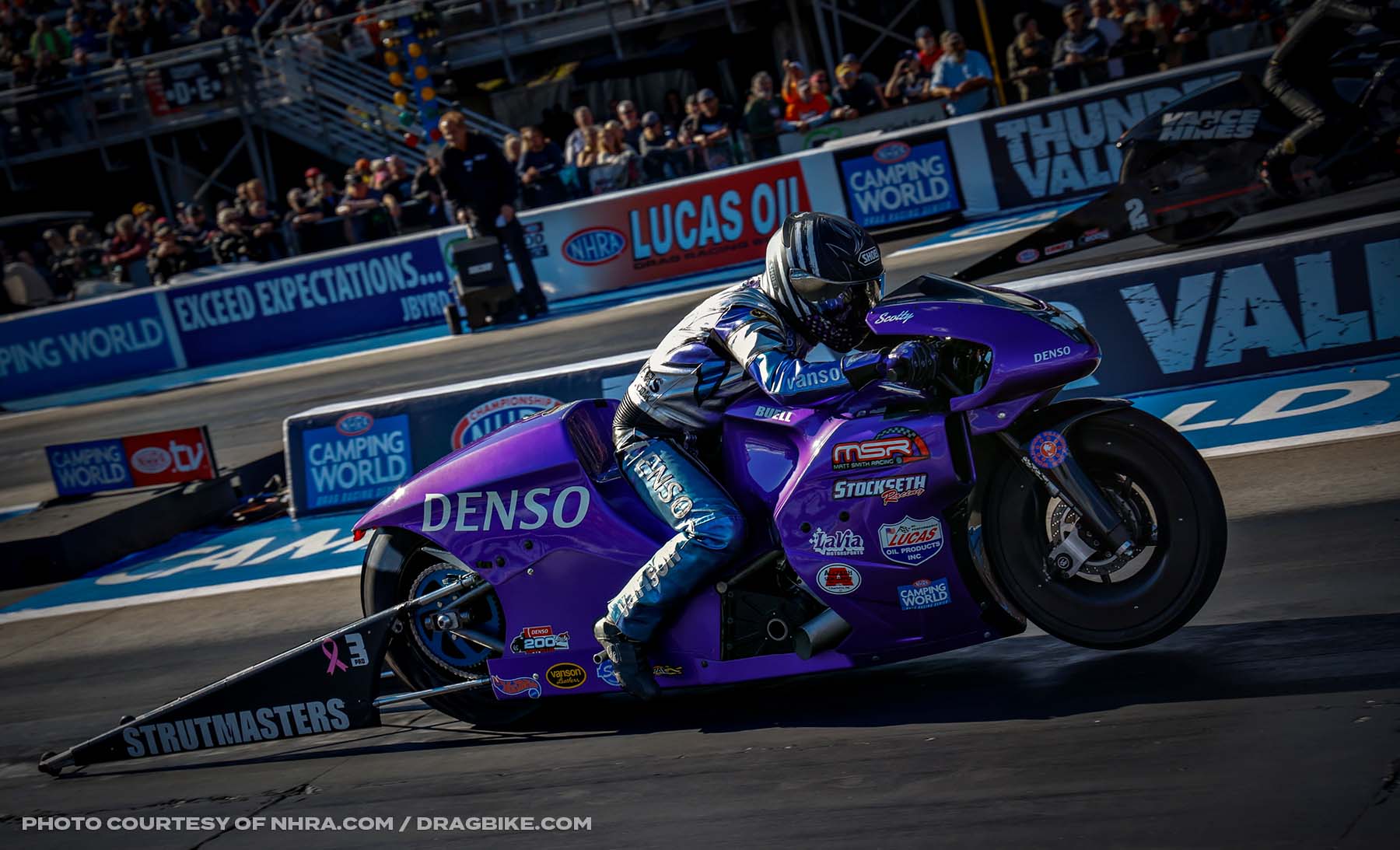 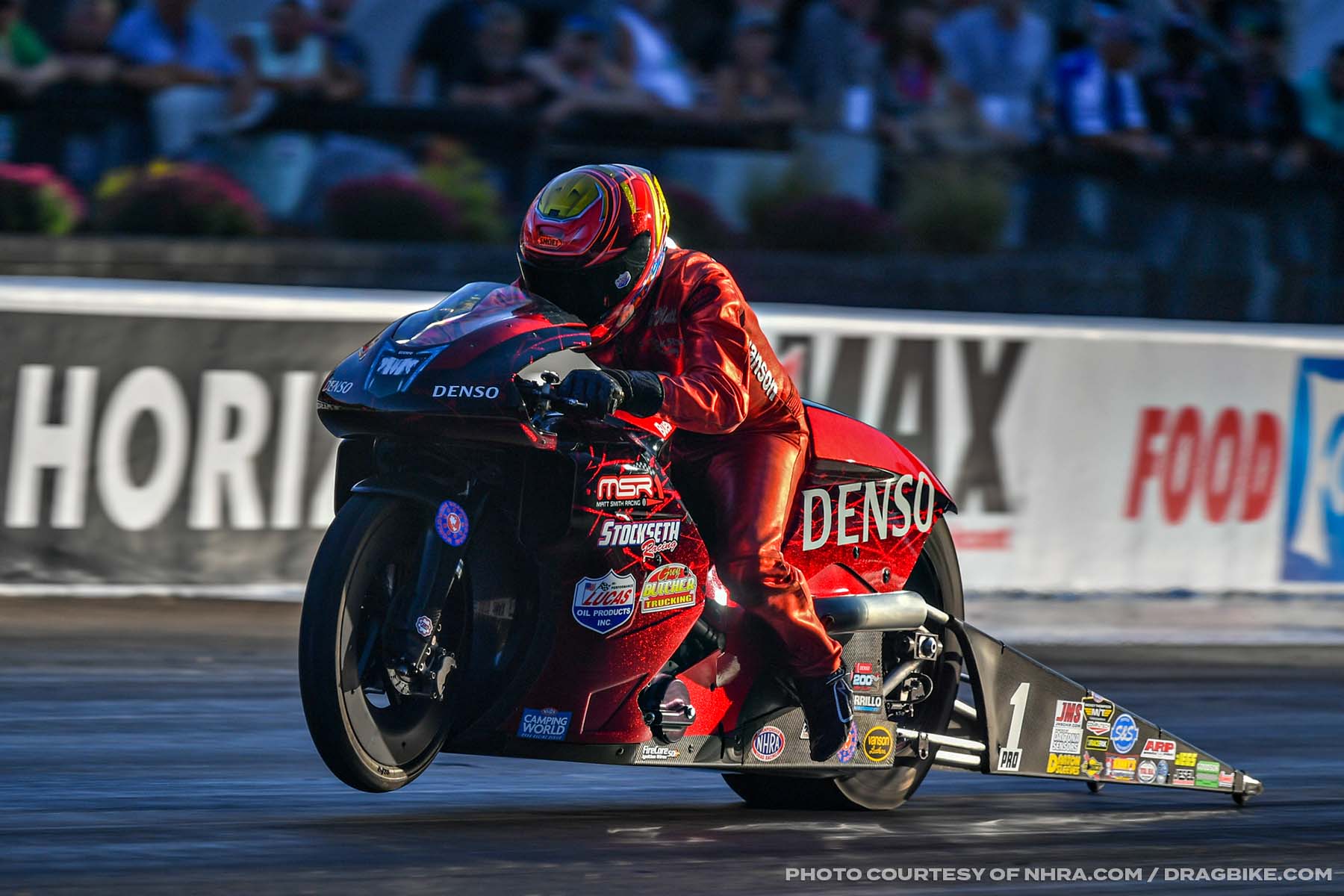 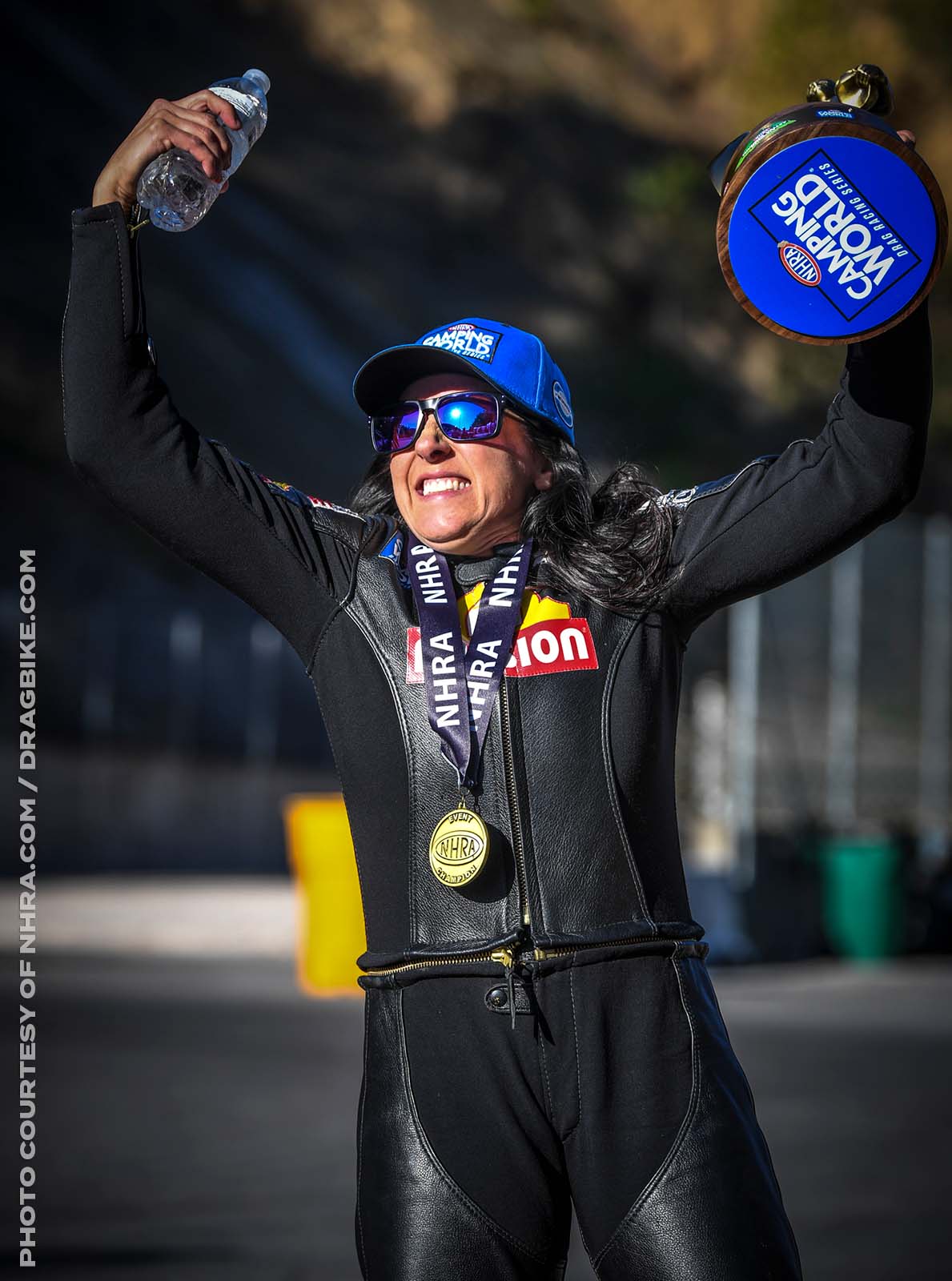 Pollacheck grabbed the No. 1 spot from his teammate in Pro Stock Motorcycle, Matt Smith, during the final pass of the day, earning his third No. 1 qualifier this season and fourth in his career on his Denso/Strutmaster/MSR Buell with a run of 6.859 at 197.80. He’s after his second win of the season and heads into raceday on a good note following his strong pass to close out qualifying.

“It’s so awesome to be here at Bristol and to be No. 1,” Pollacheck said. “To come here, someplace I’ve always seen on TV and I’ve always to come to because it looks so awesome, and end up with the No. 1 spot on the final qualifying run was pretty special. It was a good team effort and it was a good pass. It was a little surprising, but Matt told me afterward that if I rode it (well), it would go an .85.”

Smith, the defending world champ and current points leader, improved on his run from Friday, qualifying second with a 6.865 at 197.54 and Karen Stoffer jumped to third after going 6.867 at 189.26.

Picking up right where he left off in Dallas, Pro Stock Motorcycle went to the top on his Denso Auto Parts/Stockseth/Matt Smith Racing EBR with a run of 6.900 at 197.51. This weekend marks the first official race for the class at Thunder Valley and Smith, the defending world champ and current points leader, made a strong first impression. If it holds, it would be the fourth No. 1 qualifier for Smith this season and 47th in his career.

After a slow start in the Countdown to the Championship, Smith is back to his usual impressive form, winning in Dallas and putting together a strong run in Bristol to open the weekend. It is the fourth of six playoff races in the class and Smith had an eight-point lead on Steve Johnson entering the weekend.

Qualifying continues at 12:30 p.m. ET on Saturday at the NHRA Thunder Valley Nationals at Bristol Dragway.