John Force finished off a dominating weekend with his first victory of the 2022 NHRA Camping World Drag Racing Series season, racing to his 155th career Funny Car win on Sunday at the Circle K NHRA Four-Wide Nationals at zMAX Dragway.

The Charlotte four-wide event continues to treat Steve Johnson very well, as the Pro Stock Motorcycle veteran rode his way to a second straight win and a second consecutive victory at the Circle K NHRA Four-Wide Nationals. Johnson went 6.740 at 200.65 on his USA Electric Suzuki in the finals, easily distancing himself from Karen Stoffer, Eddie Krawiec and Joey Gladstone. It gives Johnson his 11th career victory and plenty of momentum after also winning last weekend in Houston. At zMAX Dragway, Johnson had the quickest bike of every session during eliminations, including an impressive run of 6.712 at 201.40 in the second round that set the track record. He also moved into the points lead with his second victory this season.

“These bikes, they’re so hard to ride perfectly,” Johnson said. “We made some good runs today, but it’s never going to be an easy day in this class. For us to win, it’s special and this track is always a special place. Anytime you can win and win a race at a Bruton Smith track, you’re killing it and doing a great job.”

Stoffer, who won the opener, in Gainesville finished as the runner-up with her run of 6.824 at 198.88 in the championship round quad. She now trails Johnson by six points.

The NHRA Camping World Drag Racing Series returns to action May 13-15 with the Virginia NHRA Nationals at Virginia Motorsports Park. 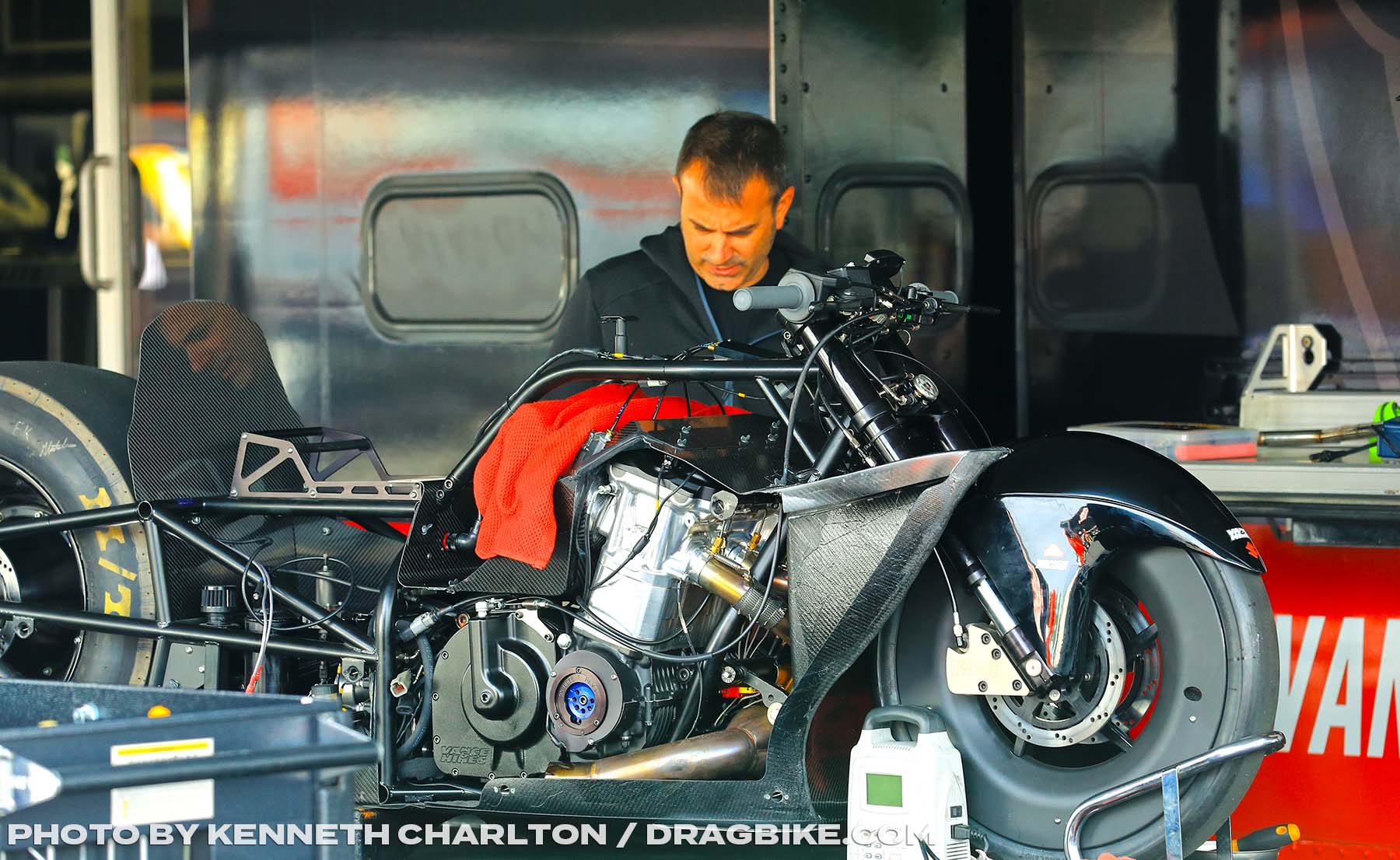 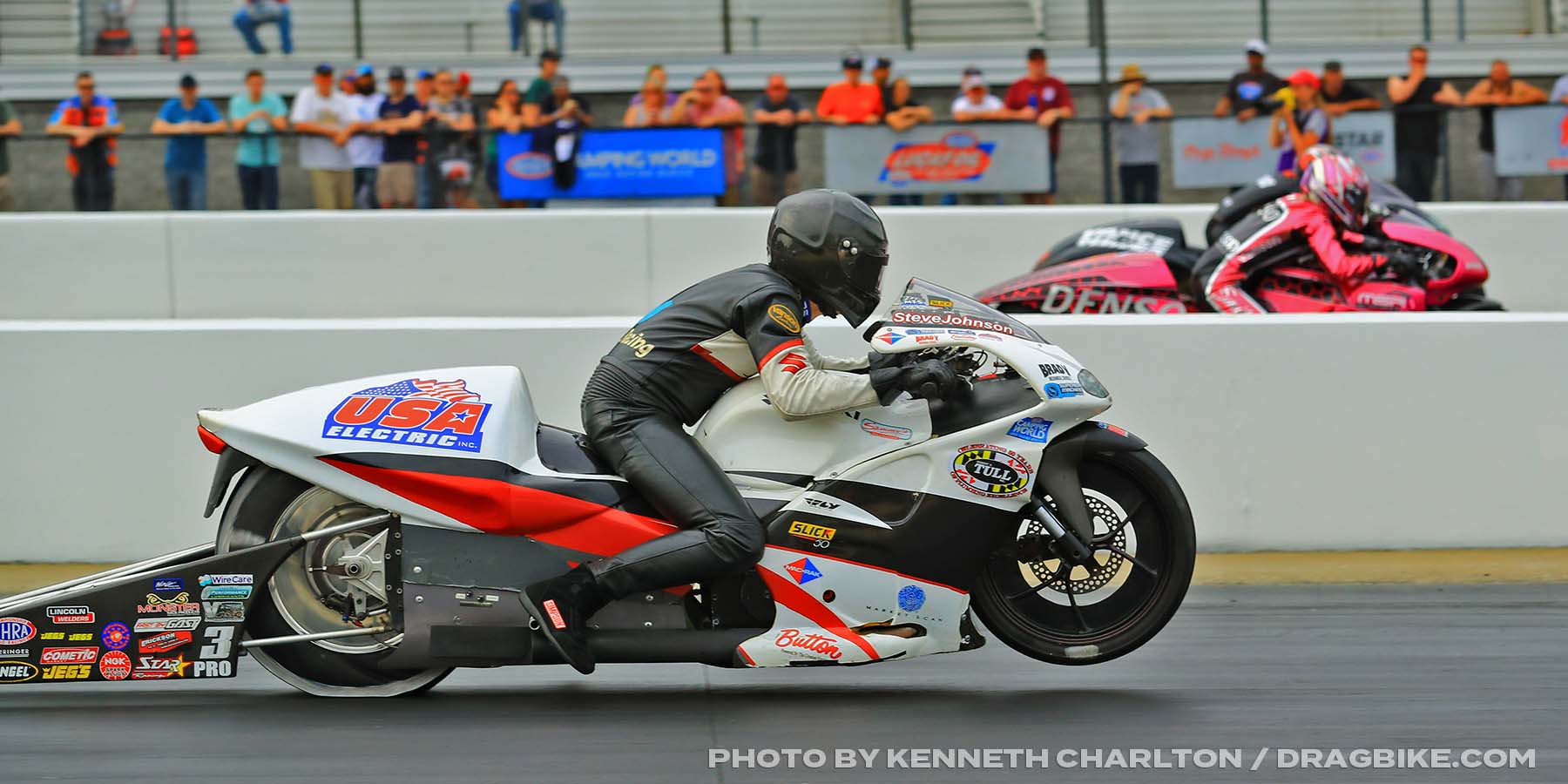 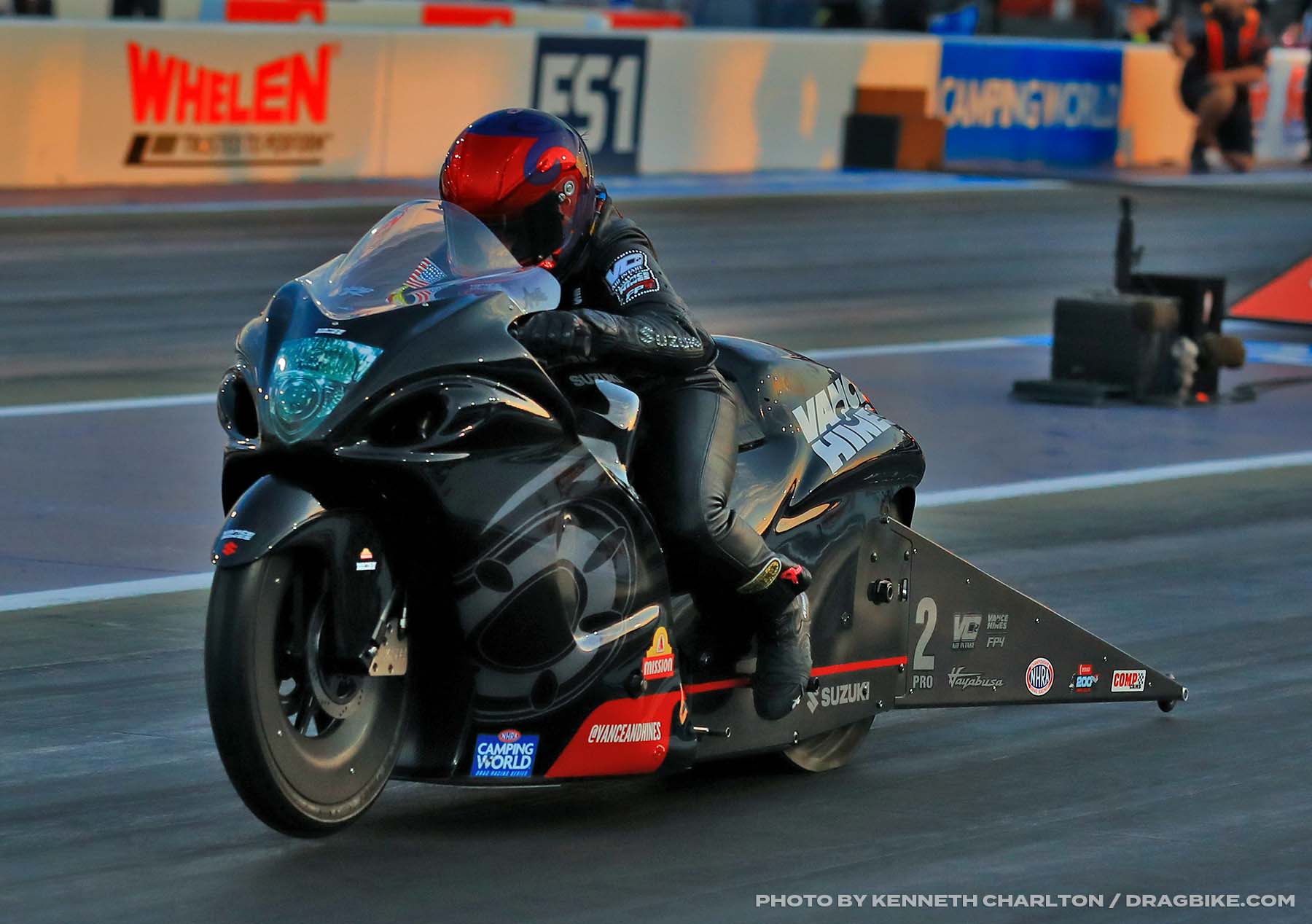 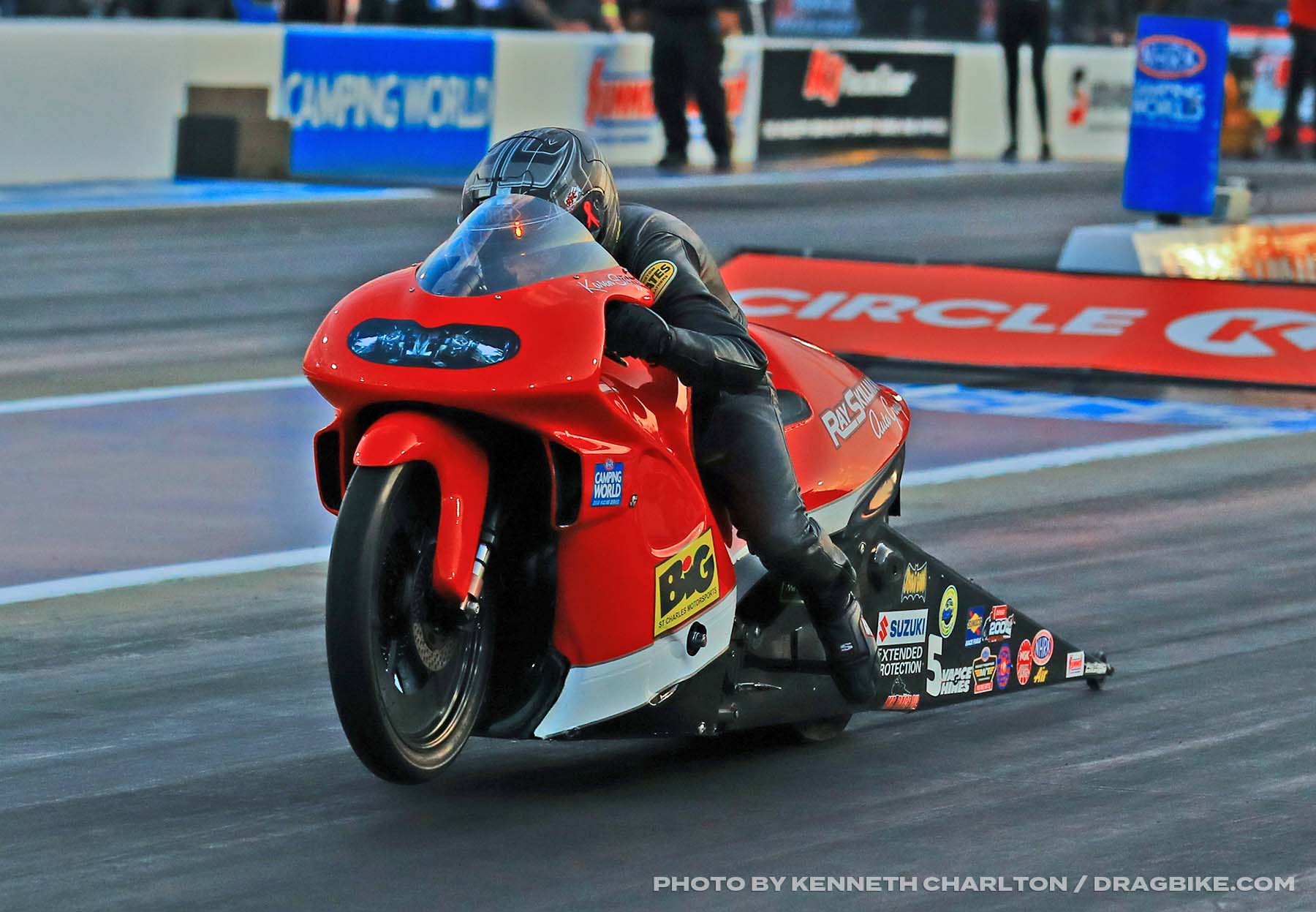 Angelle Sampey turned in a banner performance on Saturday, making two quality runs on her Mission Foods/Vance & Hines Suzuki, including a top run of 6.714 at 201.16 to give the three-time world champion her first No. 1 qualifier of the season and the 54th in her career. Sampey added another strong run of 6.721 at 201.82 to close out the day, giving her the two quickest runs of the weekend thus far and plenty of momentum heading into eliminations on Sunday. Sampey, who will meet Kelly Clontz, Joey Gladstone and defending world champ Matt Smith in the first round of eliminations, is seeking her first win of the season.

“We were a little late on this No. 1 qualifier,” Sampey said. “We should have had it in Gainesville, we should have had it in Houston, and we definitely got it here, thank goodness. I knew my Suzuki had it in it, but I’ve been most of the problem. It’s just an awesome motorcycle and (crew chief) Andrew (Hines) is doing a great job tuning. This team gives me everything I need and it’s up to me to get the job done, and I’m going to work on that tomorrow. The confidence is definitely coming and we’re learning the bike together, and it’s all coming together.”

In the FuelTech NHRA Pro Mod Drag Racing Series presented by D-Wagon, Justin Bond drove to the No. 1 position with his pass of 5.744 at 248.20. It is the sixth career No. 1 qualifier for Bond, who will look for his first win of the season at a race that is powered by Precision Racing Suspension. Gainesville winner Kris Thorne qualified second with a 5.751 at 253.42 and Rickie Smith is third after going 5.760 at 252.76.

After winning last weekend in Houston, Johnson took the top provisional spot in Pro Stock Motorcycle right off the trailer, going 6.767 at 198.70 on his USA Electric Suzuki. Johnson ran into trouble during the second round of qualifying when his bike xxx on the starting line but having success in Charlotte isn’t anything new for the veteran these days. He picked his first win in the class in seven years when Johnson won in Charlotte last year and he appears on a solid track thus far this weekend at zMAX Dragway, moving in contention to qualify first for the eighth time in his career.

“The bike was good and if I would have driven it better it would have been even quicker,” Johnson said. “These bikes are very challenging to ride and to try to go 6.60s or (low 6.70s), the rider really has to do an incredible job. There’s a lot of stuff going on in six-and-a-half seconds. It comes at you so fast and it’s a lot of work to ride them perfectly.”