In the first all-female final round in NHRA Pro Stock history, Houston native Erica Enders closed out Houston Raceway Park in style, picking up the win in front of a sold-out crowd at her home track on Sunday at the 35th and final NHRA SpringNationals.
Brittany Force (Top Fuel), Matt Hagan (Funny Car) and Steve Johnson (Pro Stock Motorcycle) also won the fifth of 22 races during the 2022 season as the NHRA Camping World Drag Racing Series enjoyed consecutive days of sellout crowds to close out racing at Houston Raceway Park.

Johnson enjoyed a banner day in Houston to pick up his first Pro Stock Motorcycle win of the season, going 6.720 at 199.91 on his Slick 50 Suzuki to beat longtime rival and defending world champ Matt Smith in the finals. Johnson was simply dominant during eliminations, making the quickest run in Houston history in the opening round and then setting both ends of the track record a round later with a pass of 6.711 at 201.55. He knocked off Eddie Krawiec to advance to the finals, where he put together another strong run to earn his 10th career win and first at Houston Raceway Park.

“A win like this all starts back at the shop,” Johnson said. “This is a huge accomplishment for us. We didn’t run well at Gainesville. I really felt like I had a good bike, but we couldn’t show it. It was a huge setback for our team, so to come here and get a win was big. It’s nice to get a win early in the season and this race is also so special to us because it’s where I got my first sponsor. There’s a lot of good memories here.”

Smith advanced to the final round for the first time this season and the 66th time in his career thanks to round wins against Kelly Clontz, Chris Bostick and No. 1 qualifier Karen Stoffer. 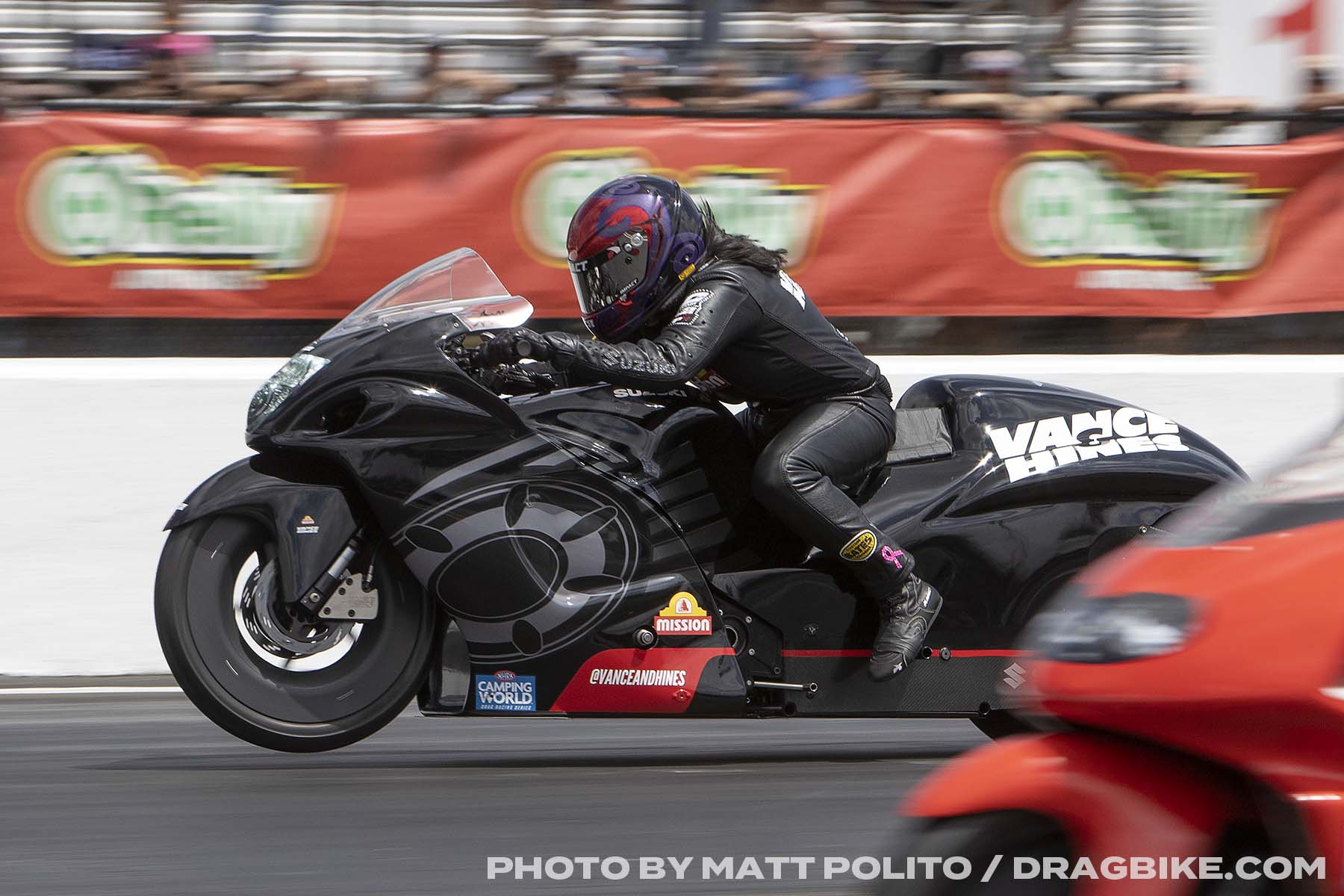 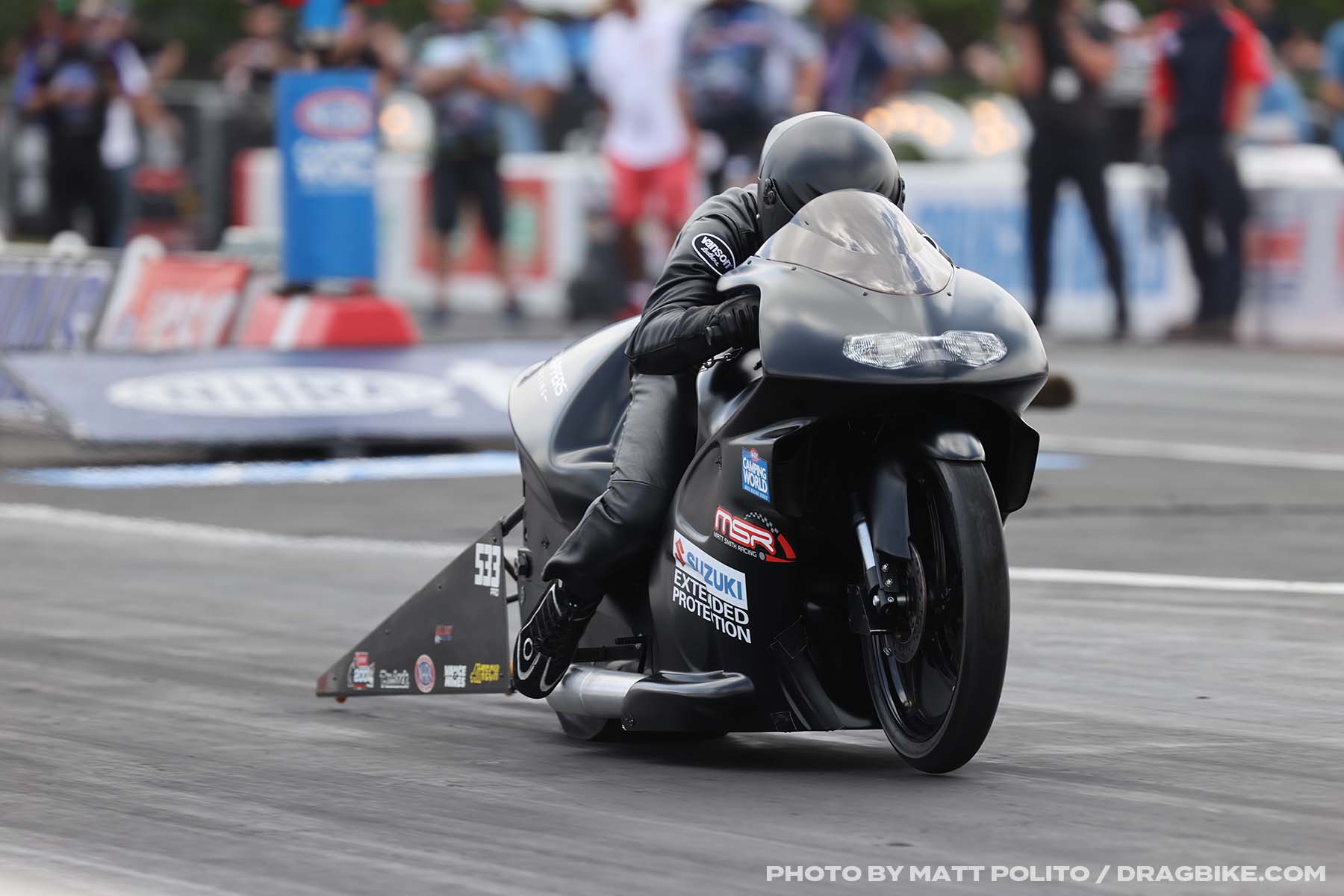 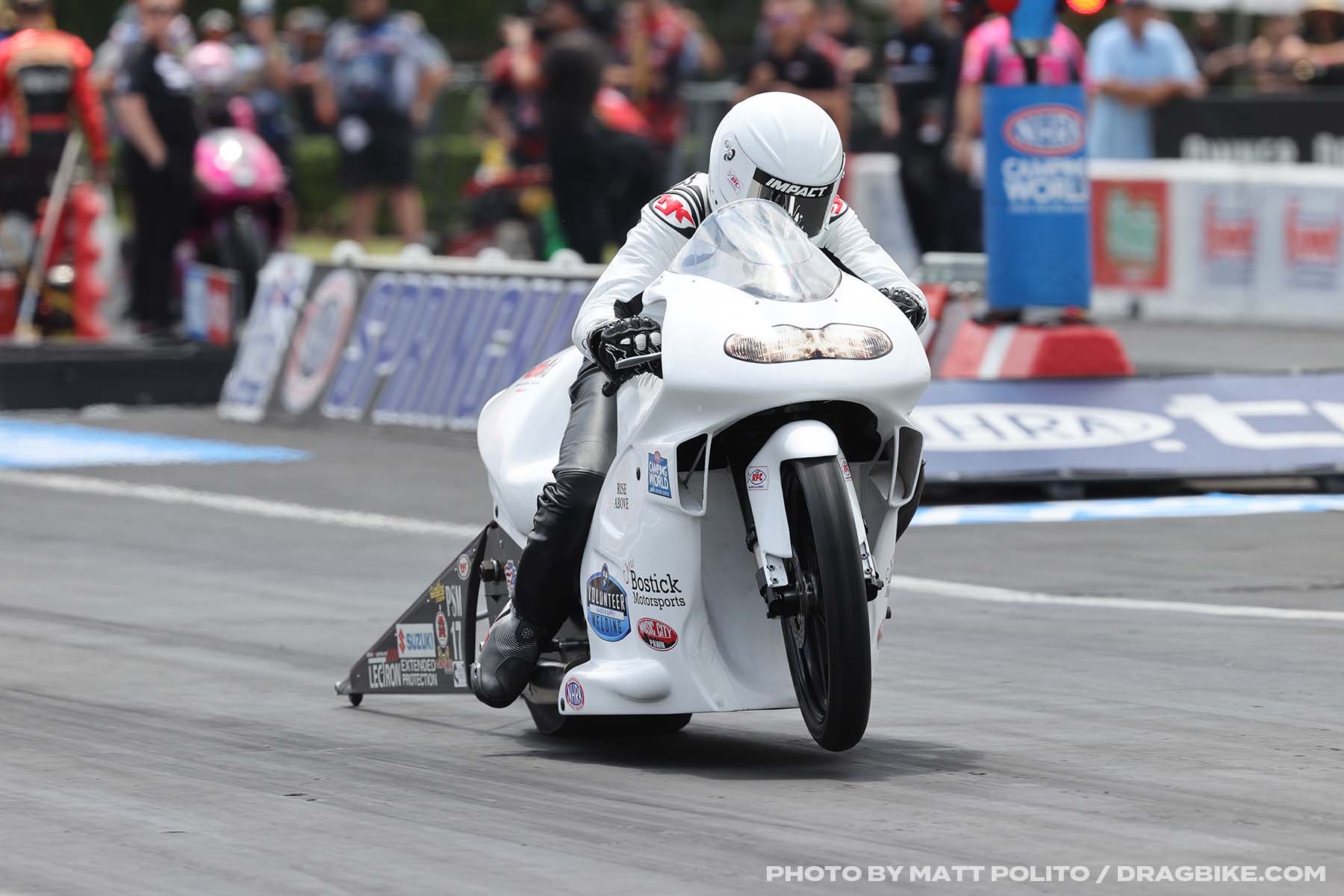 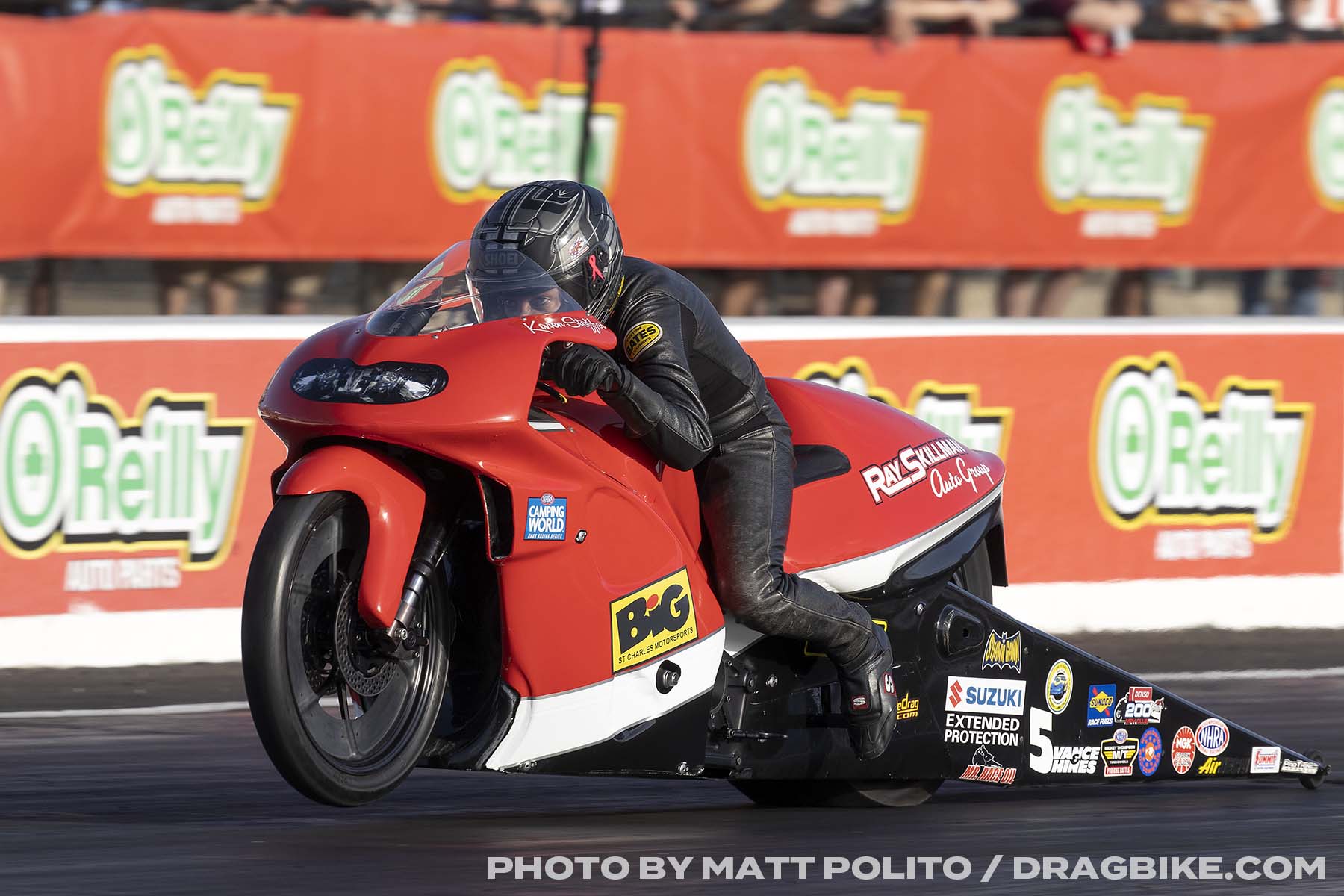 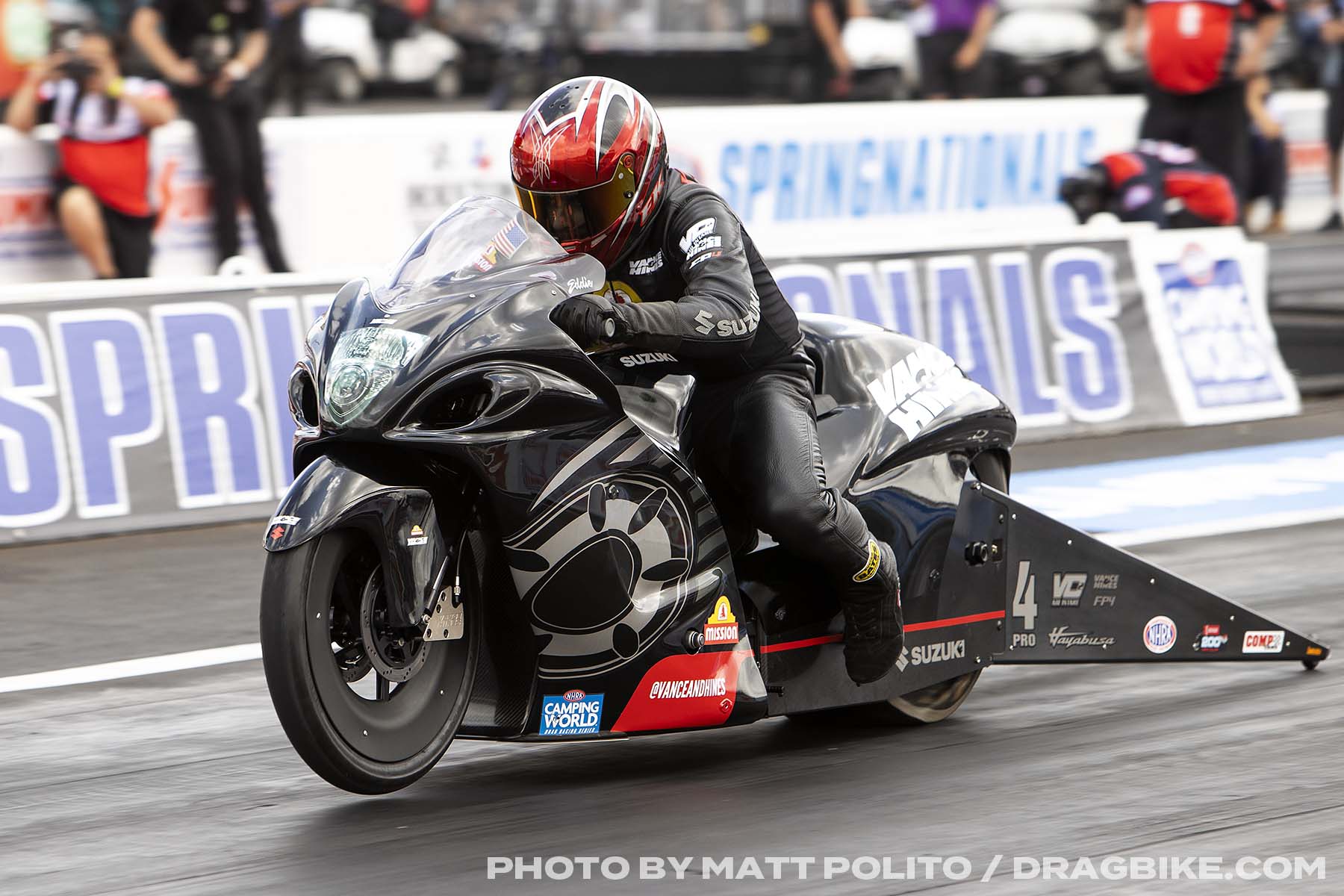 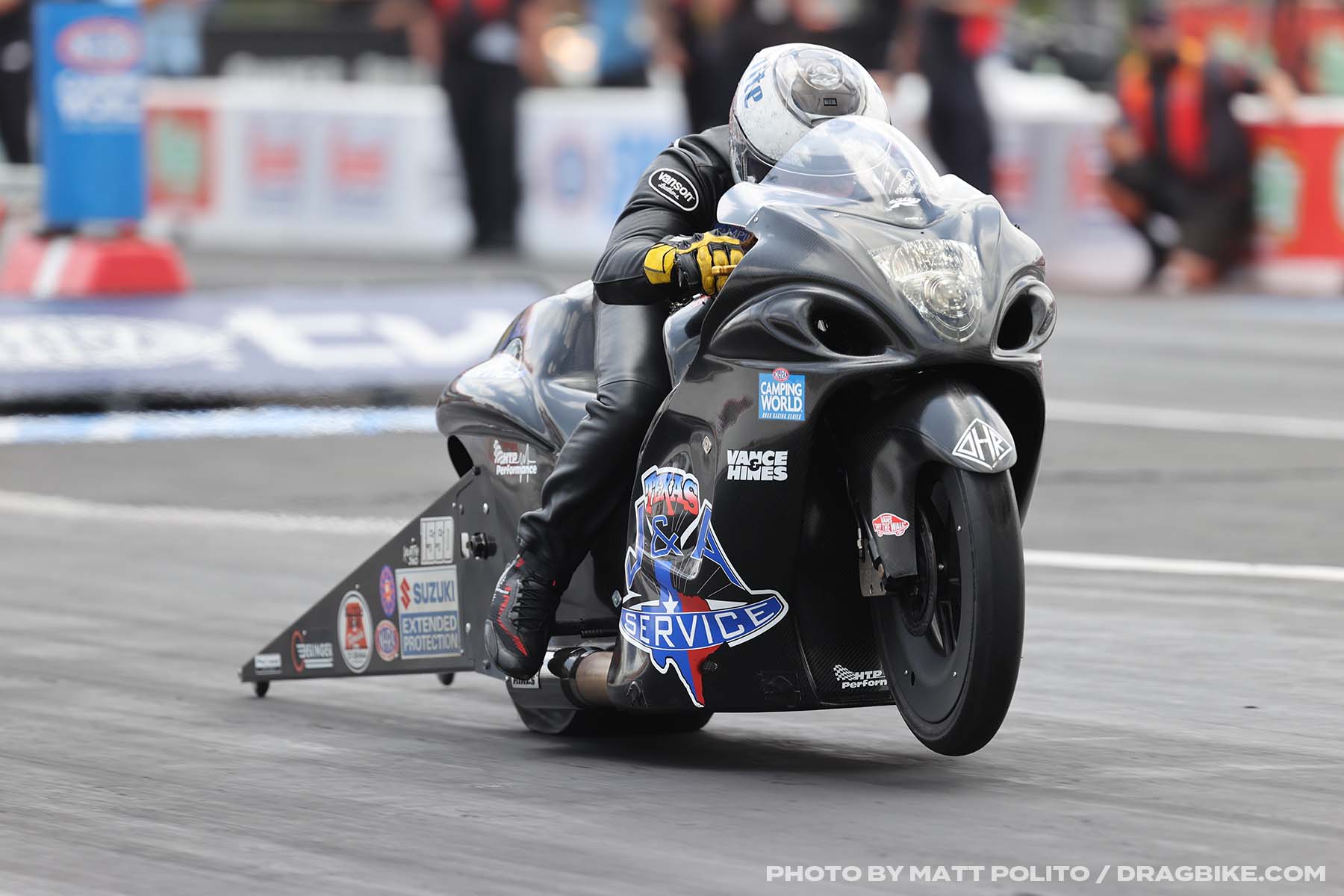 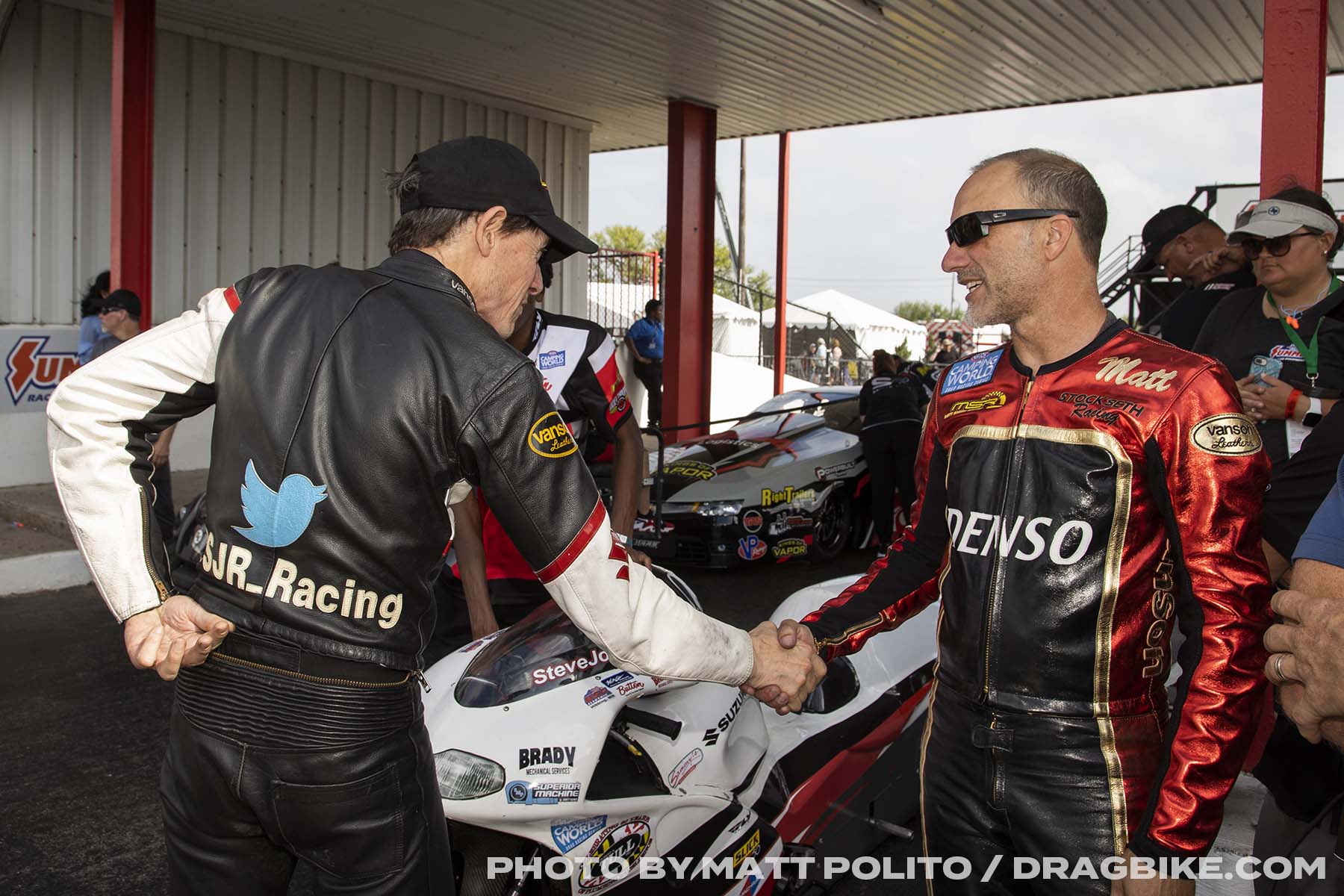 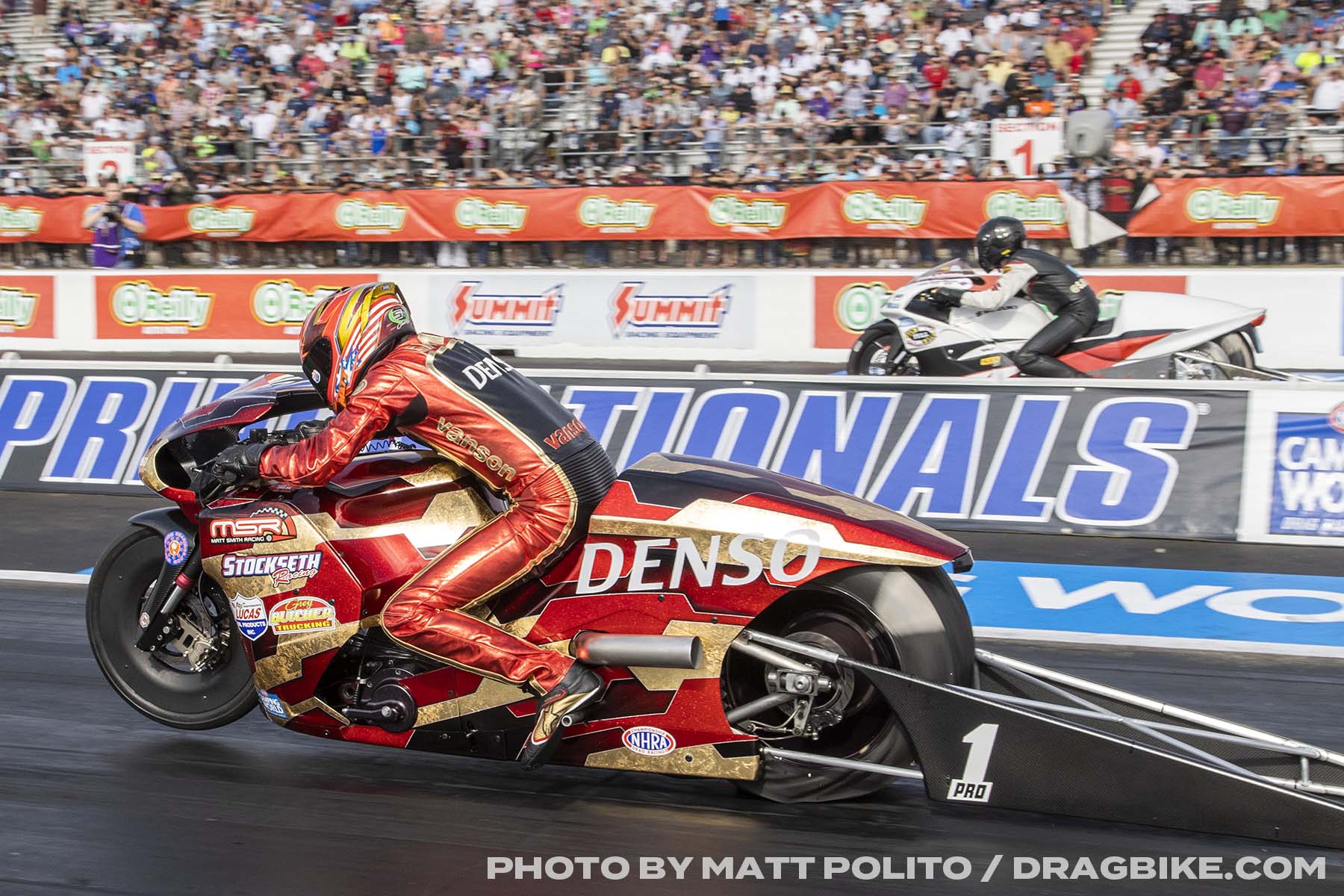 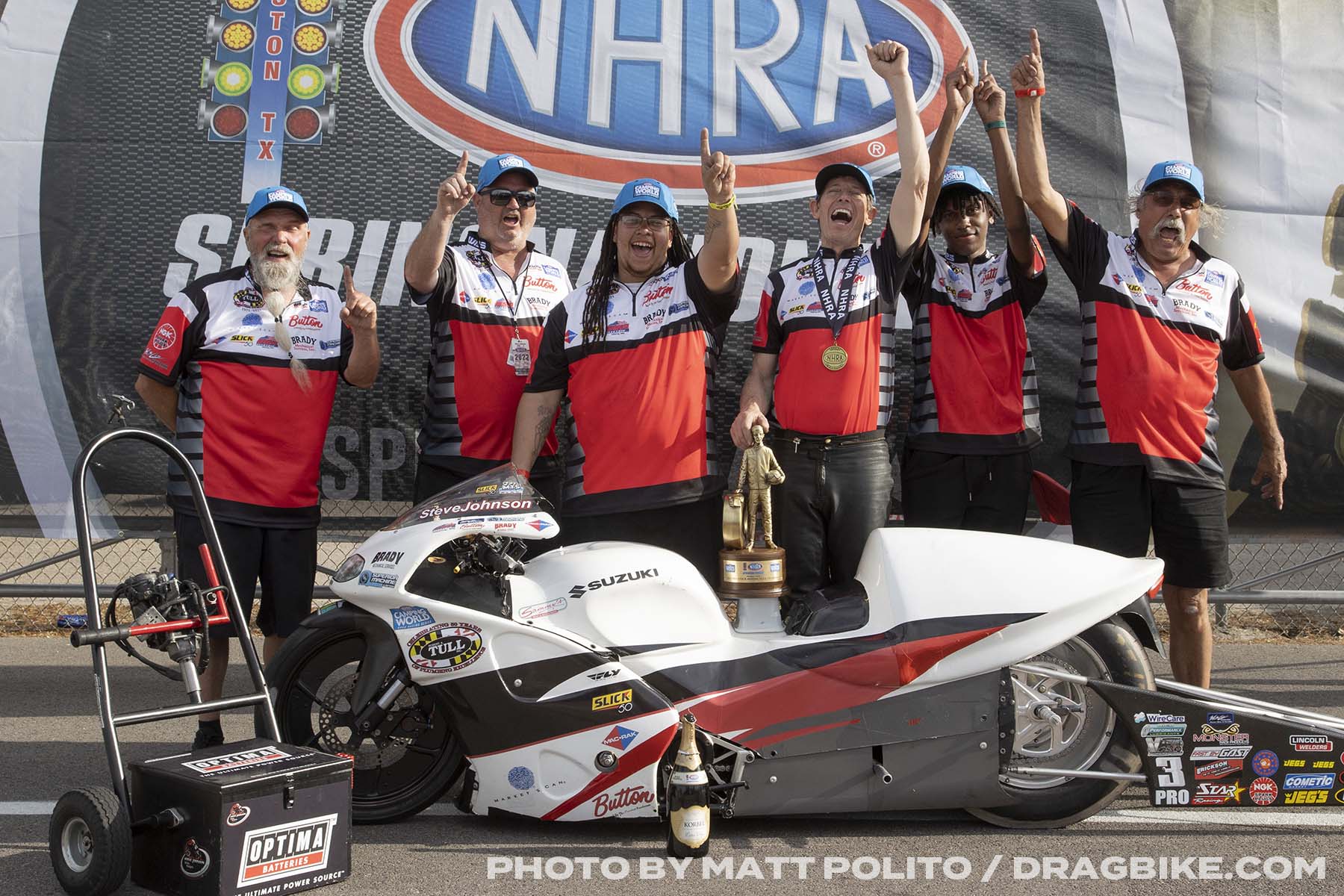 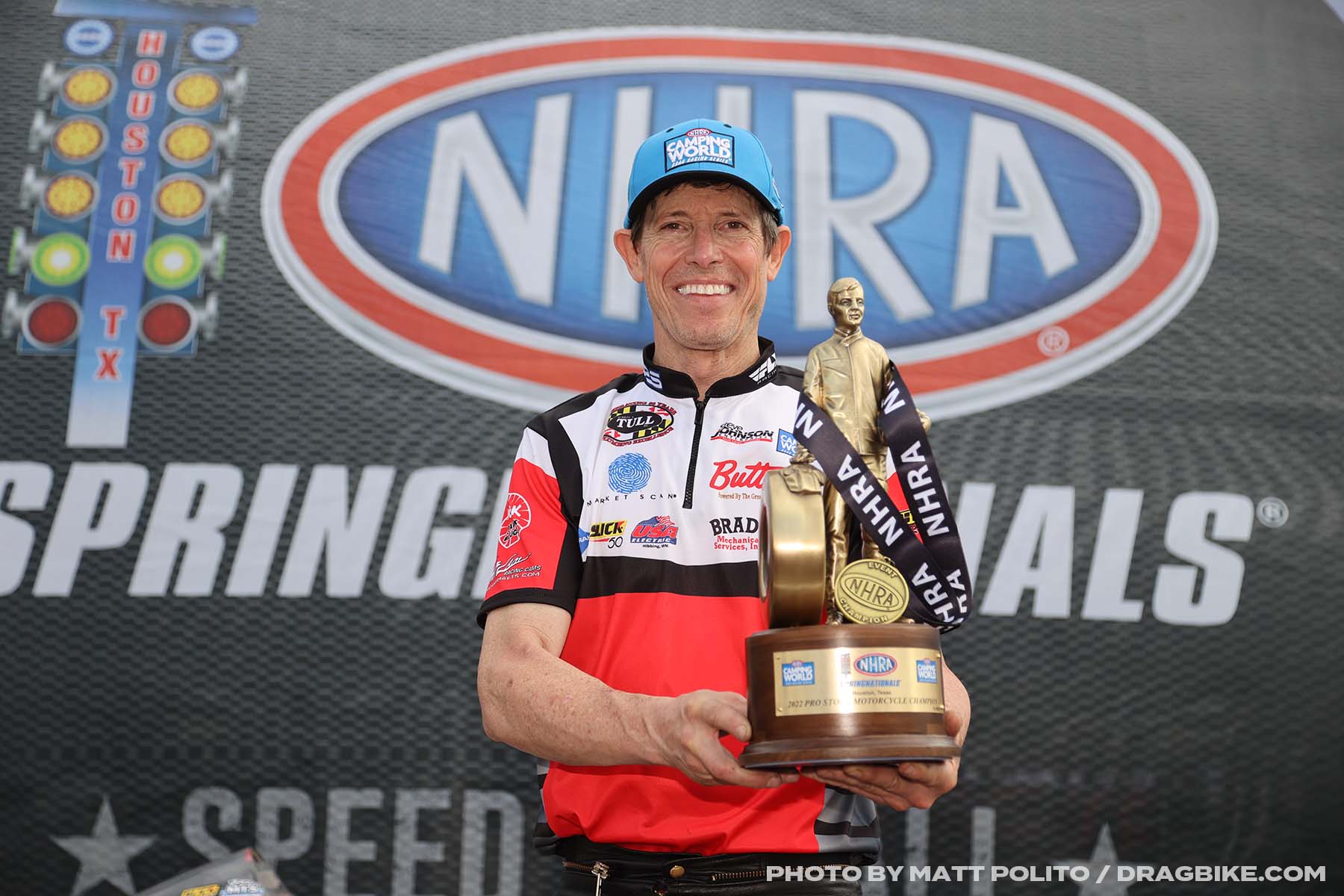 After taking the provisional No. 1 on Friday, Stoffer was even better on her Ray Skillman Auto Group/Big St. Charles/Suzuki Extended Protection bike to close out qualifying on Saturday, going 6.738 at 200.35 to record her sixth career No. 1 qualifier. Stoffer obliterated the record books en route to the Gainesville victory last month and has been just as impressive in Houston. She’ll open eliminations against David Barron while trying to keep her hot streak going and pick up a third Houston victory as well.

“I’m just grateful and happy. It’s a happy bike and it’s so much fun to ride,” Stoffer said. “I’m so blessed and thankful to be able to ride it all the time. Houston has always been a special place to me. It’s where I won my first-ever national event and it’s very cool to wear the No. 1 hat here. I’m grateful every time the bike goes a little faster and it is truly a fun bike to ride. It’s only the second race, so there’s a big road in front of us, but I’m definitely enjoying every moment we have like this.”

Steve Johnson made a pair of standout runs on Saturday, jumping up to second and nearly getting past Stoffer with a run of 6.739 at 199.76. He also made a 200-mph run earlier in the day. Eddie Krawiec took third with a 6.798 at 200.08, while reigning world champ Matt Smith, broke his own track speed record with a blast of 201.37. He is qualified fifth.

Stoffer simply picked up where she left off, vaulting to the top spot in Pro Stock Motorcycle after setting the world record and winning the opener in Gainesville. This time, she went 6.775 at 199.64 on her Ray Skillman Auto Group/Big St. Charles/Suzuki Extended Protection bike on Friday, hoping to pick up her sixth career No. 1 qualifier. Stoffer also has a strong history in Houston, winning a pair of races, and has been nothing but incredible to open the 2022 season.

“Gainesville seems like it was forever ago, so you’re definitely wondering if you can continue that momentum, but we were excited about putting together another good pass,” said Stoffer, who has two career Houston wins. “I think there’s more out there and there’s definitely going to be a lot of competition, but I hope it holds. It was fun and I’m just having such a blast on that bike. It’s just so fun to ride and it’s going so smooth and so straight and so fast. I’m just having a good time with it.”

Angie Smith, who finished as the runner-up to Stoffer in Gainesville, gave females the top two spots in the class with a 6.798 at 199.97, while Steve Johnson rounded out the top three with a 6.804 at 197.68 after the first qualifying session.