The Top Fuel Harleys were slated to begin their eliminations at 10:30am on Sunday morning, September 4th, 2022 and Bobby Malloy and Johnny Toth fired up at exactly 10:29AM, EST under cloudy skies. 72 Degrees and a corrected altitude of 2,521 feet greeted the teams.

The first pair off the line was John Toth (R) vs Bob Malloy. Bobby was off the line quickly and his motor grenaded just 30 feet off the starting line, sending John Toth down the right lane.

Next out, Jay Turner was slated to race Jake Stordeur, but Jake had a cylinder head problem from his Q-2 lap, late the previous night and could not make the call to the lanes. Jay’s competition single was hot, straight and true down the L lane producing a 6.29 @ 222 MPH performance.

Then, Tii Tharpe matched up against Ryan Peery for what was sure to be a tough race and indeed it was. Ryan’s 6.38 was a stout number, but the former NHRA TFH champion Tii Tharpe calmly delivered a 6.33 that advanced Tii to the semi-final round.

In the final pair of the eight bike qualified field, Randal Andras took on the always tough Rickey House. Randal jumped out first with a .159 RT to Sharkey’s .163, and they put on a great side-by-side show for the fans, all the way down the 1320. Randal’s 6.32 to Rickey’s 6.44 was just what Randal needed to advance the semi-final where he will face the Bull Dog – Jay Turner.

Malloy is 1 – 0 against Toth in prior events. Toth with a slight starting line advantage, and was driving away for the win. He then starts to drift out of the groove and toward the centerline. He collects the finish line blocks an gives the win back to Malloy. Malloy was up in smoke right at the hit and appears it blew up and he comes to a stop on the track. He still gets the win.

This is the first time Turner and Stordeur have faced each other in eliminations. Stordeur can’t get the bike to fire, giving Turner the freebie. Turner is straight down the groove for the win with his quickest pass of the weekend.

Tharpe is 1 – 0 against Peery in prior events. They have identical reaction times and Tharpe has the lead by 100 feet and never trails from there on for the win. He will have lane choice over Malloy in the next round.

Turner is 6 – 5 against Andras in prior events. Andras with a couple ticks on the tree, but Turner has the lead by the time they go by the Christmas tree. He kept it hooked up with his quickest pass of the weekend.

Tharpe is 3 – 1 against Malloy in prior events. Tharpe’s chute popped out as he was attempting to start the bike, the crew is trying to repack it. Finally they give up and Malloy will have the single. He starts to drift out of the groove, and he will give up lane choice to Turner in the final.

On Monday, September 5th, 2022 a rain delayed Top Fuel Harley final round was completed with Jay Turner winning the NHRA US Nationals for the big thunder bikes. This is Jay Turner’s first ever win of the NHRA US Nationals as a TFH pilot. His riders, Tii Tharpe and Randal Andras have won previously, but this is Jay’s first personal victory as a drag bike pilot and what a job he did tuning and piloting his TFH. 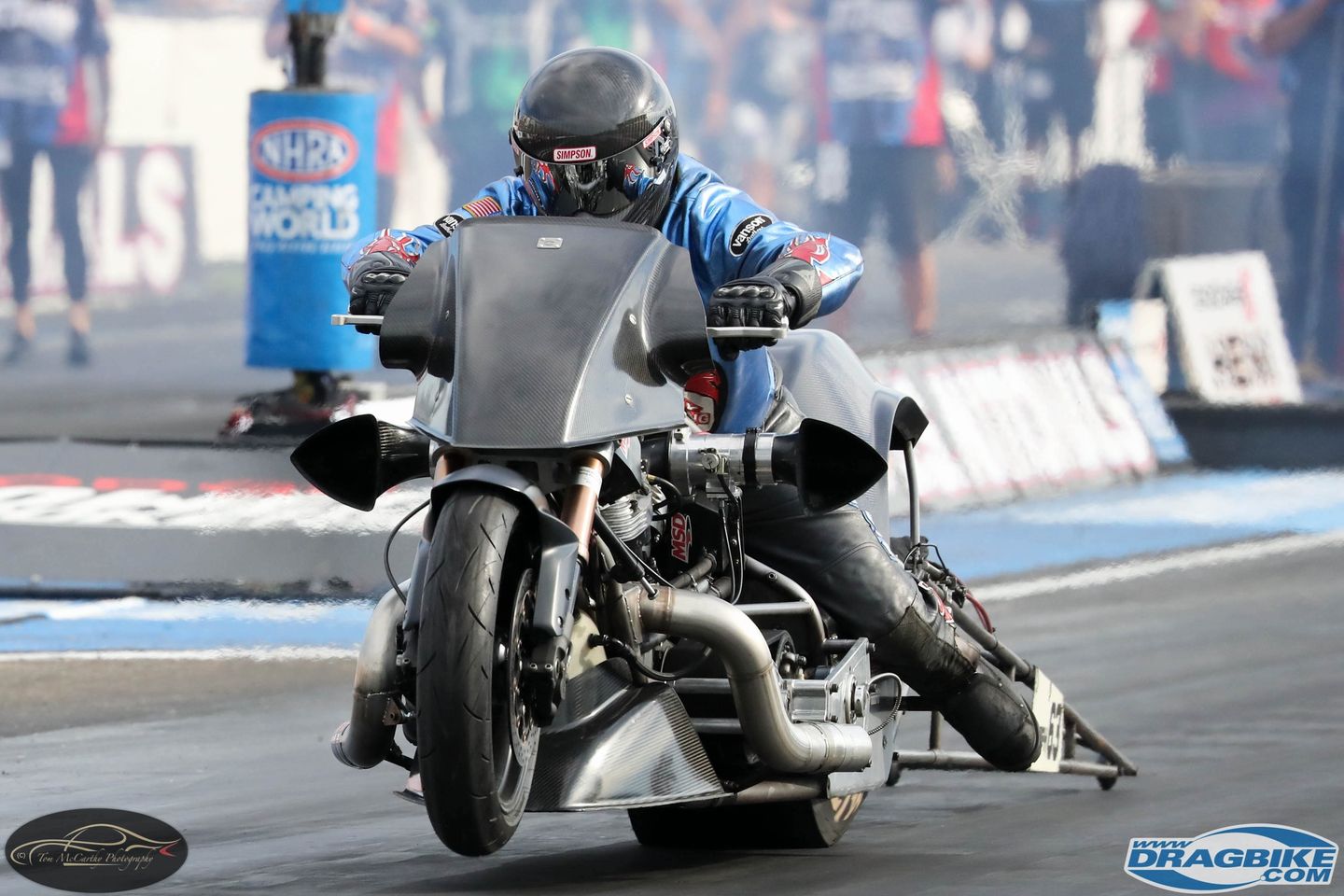 Jay Turner has been racing nitro Harleys since 1989 and he didn’t win his first nitro Harley championship until 10 years later in 1999. Jay Turner Racing continues to be – the toughest team to beat in Top Fuel Harley.

NHRA Top Fuel Harley – Final qualifying from the US Nationals.

There was a two-plus hour rain delay on Saturday at the NHRA US Nationals. This necessitated the sanctioning body to delay the Top Fuel Harley class till 9:30PM for their second and only run of the day on Saturday. They were on tap for two runs, but the long delay lead to a long day for everyone.

A major shuffling of the deck occurred as expected for the big thunder bikes. The Q-2 final session ended up with Bob Malloy stepping into the #1 spot with a 6.22, landing Jay Turner in the #2 spot with his 6.35 standing tall. The other six qualifiers in order are: Randal Andras 6.36, Tii Tharpe 6.39, Ryan Peery 6.50, Rickey House 6.57, Jake Stordeur 6.78 and John Toth on the bump with his 6.88 from his Q-1 landing him in the field for the 68th running of the NHRA US Nationals.

Round 1 of eliminations should commence at about 10:30 am EST on Sunday, depending on prevailing conditions. Malloy Vs Toth, Tharpe Vs Peery, Turner Vs Stordeur, and Andras Vs House.

NHRA Top Fuel Harley – On Friday evening, qualifying for the 68th US Nationals commenced close to 5:35 PM. Temp was 83 degrees f/ with 51% humidity and the barometer showing 30.04, yielding and adjusted altitude of 3,071 feet.

Michael Balch led off qualifying with a left lane pass that had a good launch, but developed traction difficulties early and he shut the bike down quickly with no damage to the motor. Jim Martin’s NFB developed problems on the starting line and did not make a pass.

Chris Smith made an A to B solo pass on his NFB, posting a 776 @ 184. Ricky House then launched hard and announced he’s back after a year long battle with Covid-19 that all but killed him. He’s strong and ready for battle now, his 6.81 @ 192 was like a raging bull for ¾ of the track with his front end up high for most of the run. He’s excited about this after such a long time off and he will be out with guns blazing for Q-2. Billy Jackson was in the other (R) and clocked in with a 8.91 @ 111 mph.

The final pair out for the session was Randal Andras and Bobby Malloy. Randal spun the tire early in the run and aborted his pass quickly. Bobby Malloy launched in the R lane and parts came off his bike before he was 100’ out of the hole and he idled down the track to the first turn off.

Jim Martin and Jake Stordeur did not make a pass during Q-1. Saturday Q-2 session is slated to kick off at 12 noon and Q-3, final session to commence at 3:35 PM.