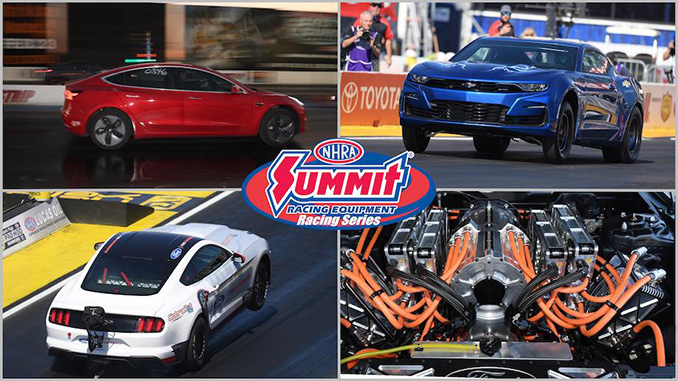 NHRA has announced the creation of an all-new electric vehicle (EV) racing class that will join the NHRA Summit Series in 2022.

For decades, NHRA’s Member Tracks have seen EVs, hybrids, and alternative-energy vehicles use their racetracks as a proving ground. Creating an EV class within the NHRA Summit Series accelerates the NHRA’s commitment to its racers and partners looking to develop new technology. With the rise in performance of electric street vehicles also comes the need for the NHRA to provide a safe place to race and a platform for competitors to evolve and demonstrate their capabilities.

“We are thrilled for this new opportunity for our NHRA competitors,” said NHRA President, Glen Cromwell. “NHRA Drag Racing is about performance and innovation and we look forward to seeing how these vehicles perform in 2022.”

“Summit Racing Equipment supports all forms of motorsports, and we are excited to help bring EV technology to the track through our longstanding partnership with the NHRA,” said Jim Greenleaf, Summit Racing Equipment Motorsports and Events Manager. “This is a great opportunity to expand on one of the most successful grassroots sportsman drag racing programs in the country.”

“We’re ready to support the EV market in the same way we support the internal combustion engine market—by leading the way in selection, service, and technical resources,” said Al Noe, Summit Racing Equipment Chief Marketing Officer. “No matter what the powerplant, we will continue to help racers push the limits of power and performance through a huge selection of quality parts from respected brands.”

The NHRA’s EV race car initiative was launched to bring automakers, racers, the safety industry and the performance aftermarket together. Multiple meetings between the NHRA and global OEM’s during the past four years have discussed the technical challenges and opportunities that come with EV drag racing. During that time, NHRA fans have seen the debut of the Chevrolet eCOPO, a match-race between a supercharged Ford Cobra Jet Mustang and the all-electric Cobra Jet 1400 all-electric motorcycles in the hands of Vance & Hines, and a 200-mph EV-record breaking pass by an all-electric dragster. The NHRA will continue to foster EV development as drag racing is the motorsport best suited to demonstrate the electrification of vehicles.

Rules for the all-new Summit Series EV class are in discussion and will be released as soon as possible to give builders and racers ample time to prepare for next season.