If nothing else, Hector Arana Jr. has been impressively consistent in what has been a solid start to this Pro Stock Motorcycle campaign. That consistency, however, is missing one big thing and that is a victory during the 2014 NHRA Mello Yello Drag Racing Series season.

Arana Jr. has posted three semifinal appearances in the five PSM races thus far, including last weekend at New England Dragway. While that is good enough to have Arana Jr. third in points, the rider of the Lucas Oil Buell is hungry for more at this weekend’s 17th annual O’Reilly Auto Parts Route 66 NHRA Nationals presented by Super Start Batteries. 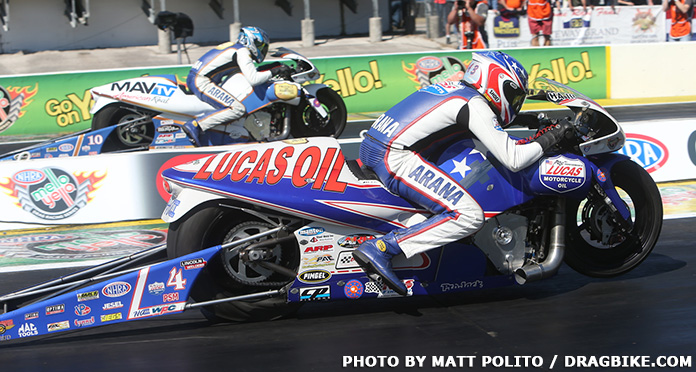 “We’re definitely headed in the right direction with the tune-up, so we will just go from there and build from that,” Arana Jr. said. “My bike has been running well and definitely improving from where it was at the beginning of the year. We’ve just got to work on how to go faster. I know we can do it and I know there’s a little bit more there.”

On the bright side, Arana Jr. continues to go rounds against heated competition and the sixth of 16 PSM events will feature another star-studded field. He is currently chasing points leader Andrew Hines, who has two victories this season, and Eddie Krawiec, while other marquee riders in the class this weekend are reigning world champion Matt Smith, Ray, John Hall, Scotty Pollacheck and Angie Smith, who picked up her first career victory last weekend in Epping, N.H. 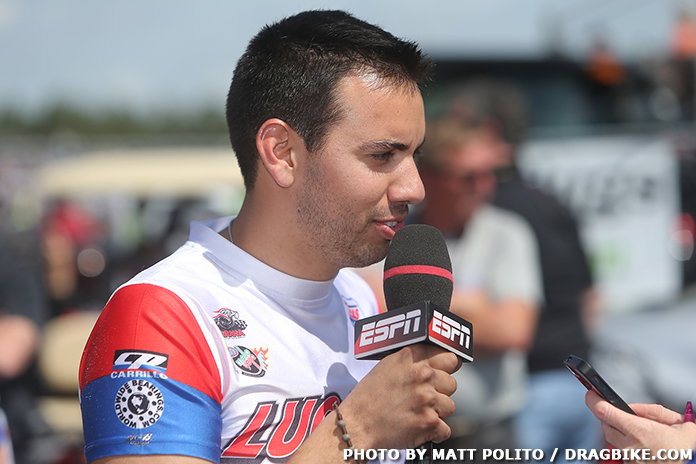 Arana Jr. fell to Matt Smith in the semifinals there when his Buell broke, but he remains confident about the direction the bike is headed. He may not have duplicated the three-race winning streak that started his 2013 season, but Arana Jr. is confident the wins will come soon enough.

“Everything is running strong, really strong on my Lucas Oil Buell,” said Arana Jr., who has seven career victories. “Dad (Hector Arana) and the rest of the crew are headed back to the shop to throw a couple of motors onto the dyno. Depending on what the numbers show, we’ll work from there and hopefully have another successful weekend in Chicago.” 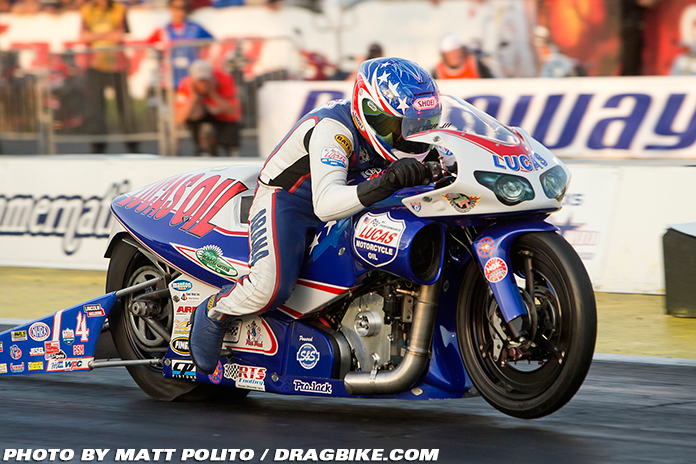 The three-bike team of Arana Jr., Hector Arana and Adam Arana also appears to be rounding into form. All three bikes advanced past the first round in Epping, marking the first time all three did so at a race together in 2014.

The other major topic on Arana Jr.’s mind is breaking his semifinal streak at Route 66 Raceway. He lost to Matt Smith in the semifinals a year ago at Chicago, but things could be different in 2014. Arana Jr. believes his bike has turned the corner when it comes to performance and consistency, which could make for a strong combination this weekend.

“We’re going to dig back in our notes for the Chicago race,” Arana Jr. said. “All three of the bikes ran well there last year, so we will definitely want to try to recreate that scenario but hopefully with a better ending. We will have to figure out what kind of combination we want to put together for Chicago. This motor is really happy right now, and hopefully she will stay like that for a while.”