Averaging elapsed and reaction times is good, but rewarding consistency is just as important. That’s where success percentage comes into play. You already have an idea of who excels at it, now NHRA is going to put numbers next to the faces.

Getting from the starting line to the finish line quickly is essentially the stated goal of a drag race. Yes, doing so more quickly than the person in the other lane(s) is a major part of the equation, but you can (probably) only control your own vehicle. So, any statistical analysis of the quality of a drag racing team should look at both how quickly the car/bike gets down the lane and how often it gets down said boulevard.

That’s where success percentage comes in. The idea is to create a percentage that shows how often a racer gets to the finish line within a certain amount of time. The subjective portion of this percentage is that “certain amount of time.” I’ve come up with solid numbers for each of the four Professional categories, but these are still open for debate; after all, what’s a good sports statistic without a little healthy debate?

The chart below shows all the driver’s available stats starting in 2016 and running through the 2017. 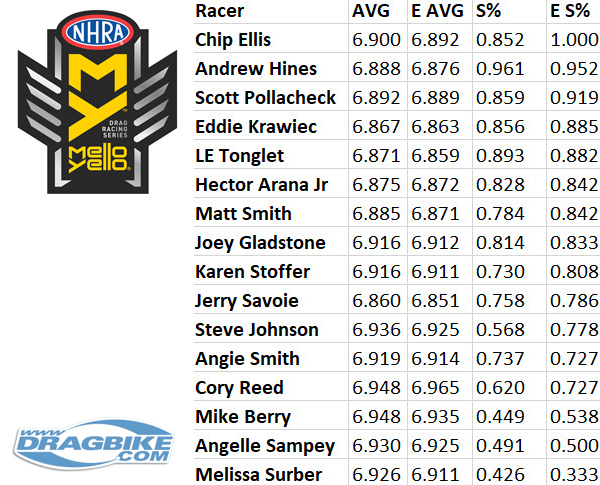 By looking at this percentage in conjunction with the average elapsed time of all runs quicker than 3.9 seconds, you can start to get an idea of who has the best car. You can take that a step further by looking at reaction times; that takes you from the best setup to who has the best overall chance of winning on race day. Before we move on, and look at some numbers from the 2017 season, here are the cutoffs I came up with for pro stock motorcycle.

The cutoff for Pro Stock Motorcycle was simple (and everyone loves a round number), plus it gives us names near the top of the list that everyone can live with. Chip Ellis, in a small sample size on two different bikes, and then Andrew Hines. Follow that up with another deadly consistent rider in Scotty Pollacheck, who made huge strides in 2017.

We then get to our two biggest contenders for the 2017 championship: Eddie Krawiec and LE Tonglet. The two got to the top with consistent passes and quick times. You’re probably starting to sense a pattern, so I won’t repeat myself here. All sports are looking for a catch-all, one-size-fits-all statistic, and the truth is that finding one is exceptionally difficult (and let’s be honest, above my pay grade). The smart money is on looking at a few different numbers and making an informed judgment. This is just another to add to the pot.

Click Here to see the performance numbers for NHRA’s other Pro classes.